The smartphone and tablet market is dominated by two names, Apple and Samsung, so it makes sense to pit the companies’ latest miniature tablets against each other. Let’s find out how the Apple iPad mini stacks up against the new kid on the block, the Samsung Galaxy Note 8.

Read our hands-on Samsung Galaxy Note 8 review here, or check out our full review of the Apple iPad mini here

They’re both 8-inch ‘flagship’ devices in what tends to be a more budget-oriented tablet sector, though their internals are a tad on the last-gen side. They both come in white or black (with other colours doubtless to follow for the Note) and are slim and light, with a likely 8-9hrs of battery life.

However, they’re very different beast both outside and in. The iPad mini is essentially a super-shrunk iPad 2 with even classier styling and stereo speakers, while the Note 8 is like a compressed version of the Samsung Galaxy Note 10.1 with slightly nicer styling and better connectivity. The former is an iOS tablet, while the latter supports Android. And the Galaxy Note 8 holds a trump card in its pressure-sensitive Wacom-based S Pen, which is handy for sketching, image editing and writing, among other things.

On the design front, there are still few companies that can casually match Apple’s regular output, and given the plasticky styling of the Galaxy family, it’s no surprise that the iPad mini looks like the more premium device. Its anodised aluminium back also provides a slightly better grip compared to the glossy plastic of the Samsung Galaxy Note 8.0. On the other hand, this Note’s curves are a tad comfier to mold your fingers around.

The weight-difference between these two tablets is not really noticeable in the hand but the Note 8.0 does feel a little bulkier, thanks to its more rounded plastic construction rather than any actual difference in thickness. When comparing though, it’s important to remember that the Galaxy Note 8.0 provides room for a stylus and slot, while also stuffing in more connectivity and a digitizer layer under its screen. 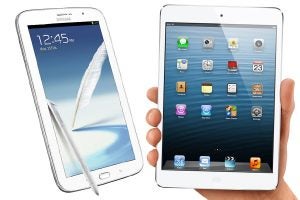 From a specs perspective, the Samsung Galaxy Note 8.0’s screen wins out over the iPad mini’s in pretty much every way. It’s marginally larger and offers a much higher resolution, as well as supporting a pressure-sensitive stylus.

Just to put some pixel figures on that, the Note 8.0 comes in at 189ppi (pixels per inch), while the mini ‘only’ offers 162ppi. Of course, both of these pale compared to the insanely high figures on the larger iPad 4 and Google Nexus 10, but on smaller tablets you simply don’t get those kind of resolutions yet- though phones have embraced 1080p on 5-inches, a la the Asus PadFone Infinity.

Beyond advantages like pixel density and sharpness, the Galaxy Note 8.0 will let you see more of a web page or document, and its 16:10 aspect ratio is better suited to watching movie and TV-formatted content than Apple’s squarer display.

All this said, without the AMOLED contrast advantage offered by the Samsung Galaxy Note 2, Apple’s IPS screens do tend to offer slightly higher contrast and generally better colour accuracy than the PLS and IPS displays in many rival devices. We’ll be sure to let you know if this holds true against this latest competitor in our full Samsung Galaxy Note 8.0 review.

When it comes to connectivity, nearly every tablet on the planet holds up better than Apple’s iPad family. Like its bigger siblings, the iPad mini gives you Apple’s proprietary Lightning connector and a headphone jack – and that’s pretty much it. Video output requires an expensive adapter from Apple, memory is non-expandable, and even Apple’s expensive USB adapter won’t let you hook up external storage or peripherals.

The Samsung Galaxy Note 8.0, on the other hand, has nearly every connector we could wish for. There’s a microUSB port which lets you plug in USB devices through a cheap, universal adapter. Using this you can connect memory sticks, external hard drives, and peripherals. It also doubles as an MHL port, which lets you output video over HDMI, again using an affordable adapter (albeit not standard MHL).

A microSD card slot lets you expand the device’s memory by up to 64GB for storing music and videos. And, just like the Samsung Galaxy Note 10.1, there’s a handy IR blaster which lets the tablet act as a nifty universal remote control for other devices like your TV. 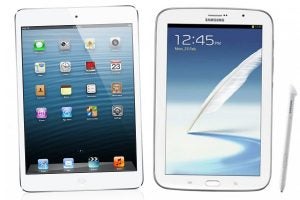 Given their near-identical resolutions, we wouldn’t be surprised if the Galaxy Note 8.0 and iPad mini tablet cameras provide very similar results. From our brief time with the new Note, shots from its primary camera seemed a little less vibrant and sharp than those of the Apple tab, but it does offer an LED flash for much more flexible shooting in dark environments. Both tablets also support Full HD video.

Unfortunately, Samsung has played a conservative card with the Galaxy Note 8.0’s under-the-hood config, giving its latest tablet the same internals as the older Galaxy Note 10.1 – which in turn weren’t a massive step up from the Samsung Galaxy S3.

The good news for the Note 8.0, however, is that Apple gave its iPad mini even more conservative specs. It’s basically an iPad 2 in terms of what’s under the hood, and – on the CPU front at least – the Note 8.0’s quad-core 1.5GHz Exynos 4 processor stomps all over the mini’s 1.0GHz dual-core A5 chip.

On the graphics side of things the equation is less clear-cut, with Imagination’s PowerVR architecture generally more capable than ARM’s older Mali 400. The iPad mini also has the advantage in games as studios can program to a small set of hardware configurations, where Android devices come with all kinds of different chips and architectures.

While the iPad mini might offer a higher maximum integrated storage capacity, it can’t match the Samsung Galaxy Note 8.0’s expandable memory. Thanks to its microSD card slot, the Note 8.0 will let you insert a 64GB card and voila, its maximum is expanded to a whopping 96GB for storing even the largest music collection or a few HD TV series.

The other major advantage to Samsung’s open approach here is cost: while going up to the 64GB edition of the iPad mini adds a hefty £160 onto its price tag, a 64GB microSD card will only set you back under £40. This certainly makes the Galaxy Note 8.0 the more affordable tablet in the space race (no, not that kind of space). 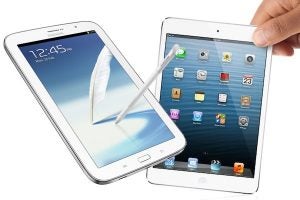 As a modern mobile operating system, Apple’s iOS is beginning to look a little long in the tooth. Taking an ‘if it ain’t broke don’t fix it’ approach, Apple hasn’t fundamentally changed the front-end of its iPad OS for several generations, and it doesn’t allow the user a great deal of customisation either.

Google’s Android, on the other hand, has been coming on in leaps and bounds. Android 4.1.2 Jelly Bean might not be quite the latest version, but it’s good enough to match Apple’s best on nearly every front (remember, we’re talking OS, not app selection).

And there’s good reason why the Samsung Galaxy Note 8.0 hasn’t yet received the latest and greatest Android 4.2. On the Note family, Samsung’s TouchWiz overlay adds a lot more than just a different look. You get proper multi-screen multi-tasking and unique S Pen features, which no other Android tablet offers – for more details on this, check out our look at Jelly Bean on the Note 10.1.

Once that Jelly Bean 4.2 update does hit, the Note 8.0 will hold even more advantages over the iPad mini, such as built-in gesture typing a la Swype, and instantly switchable, completely customisable user profiles – no more will your apps or documents be changed accidentally by another user.

Personal preferences aside, the one major lead that iOS – and as such the iPad mini – does still hold is content. There’s a larger choice of high-quality apps designed for a tablet, and thanks to a vetted store, they come without the same level of possible malware concerns as Android’s do. There are also more digital magazine editions and other third-party services.

As is so often the case, there is no clear winner here but we’ll have a better idea once we’ve fully reviewed the Galaxy Note 8.0. The iPad mini sports a nicer, more premium design and better content selection, along with a far wider range of 3rd party cases. The Samsung Galaxy Note 8.0 might not be as well-built or nice to look at but offers a better screen, better specs, more connectivity and flexibility, and of course the pressure-sensitive stylus that lends Samsung’s unique tablet its name.

The 8-inch Note also gives you the ability to send texts and make phone calls – and while you’d look like a plum holding it to your ear, when used with a headset or for those who don’t make many calls anyway, it could easily be your only mobile device. However, it’s likely to cost a bit more than even the 4G version of Apple’s 7.9-inch iPad, so again it’s a matter of horses for courses.

We’ll be updating this article once we’ve had the chance to spend more time with the Galaxy Note 8.0 so if you have specific questions let us know in the comments section below and we’ll be sure to cover them when we get our mits on one.