While Apple will take most of the headlines with the release of the iPad 5 and iPad mini 2 today, the Nokia Lumia 2520 and the Microsoft Surface 2 are the most important second-generation Windows RT tablets, coming from the two strongest supporters of Microsoft’s mobile OS.

But what is the difference between them, and should you care about either? Let’s compare their hardware, software, screens and more to find out what they’re really about.

Many tablets are anonymous black slabs you’d have trouble separating from each other, but the Microsoft Surface 2 and Nokia Lumia 2520 both have some stand-out design features.

Like the rest of the Lumia range, the Lumia 2520 is bright and colourful – something extremely rare in tablets. Its body comes in striking red and blue (cyan) shades, although more conservative white and black versions are also planned. It’s made of the same sort of polycarbonate used in Lumia phones like the Lumia 1020.

The Surface 2’s looks are a lot more conservative. Its design selling point is all about practicality. There’s a kickstand on its back that lets it sit back in a couple of different laptop-like positions. This is an alternative to the keyboard base of something like the Asus Transformer Pad – but with the kickstand it won’t fall back because of the weight of the screen.

A kickstand isn’t pretty, but it is quite practical.

These design priorities continue with the contours of the tablets. The Lumia 2520 is curvy and smooth, the Surface 2 is boxy and more angular.

Neither tablet is light enough to comfortably use one-handed – both weigh around 600g – and they are really too large to use in that manner anyway. 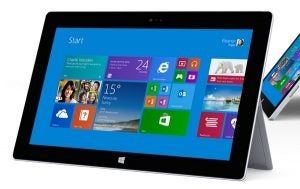 The screens of the Lumia 2520 and Surface 2 are evenly matched. They have 1080p resolution screens and both use LCD-based displays with panels designed to offer strong viewing angles.

They use toughened glass screens fronts too, in order to avoid scratches in day-to-day use. The Lumia 2520 uses Gorilla Glass 2. We expect the Surface 2 has the same screen covering, although Microsoft is yet to officially confirm this.

The one key difference is that the Surface 2’s screen is a little bit larger than the Lumia 2520’s. It’s 10.6 inches across where the Nokia tablet’s is the more common 10.1 inches. Nokia boasts about the outdoors visibility of the Lumia 2520 too, saying it has a super-bright 640nit display with super-low reflectivity. We’ll test this in our full review.

Both are high-quality screens, although they don’t match the latest Android tablets for screen sharpness. For comparison – the Nexus 7 2 costs around half the price and squeezes the same number of pixels into a 7-inch screen.

The Surface 2 and Lumia 2520 have processors from different companies, but their performance is fairly level.

The Nokia Lumia 2520 uses the Snapdragon 800 processer seen in the Sony Xperia Z1 phone. It’s made by Qualcomm and is used is several high-end phones and tablets already.

Microsoft’s Surface 2 has a slightly less common Tegra 4 processor, made by Nvidia. It has an impressive-sounding 72-core GPU, but in recent benchmarks we found that it’s the Snapdragon 800 that comes out on top in graphical performance.

However, the difference isn’t great enough for it to become a reason to pick a Lumia 2520 over the Surface 2. Both tablets have 2GB of RAM too.

These tablets are evenly matched, spec-wise. But we’ll confirm this with some more intensive benchmarking soon. 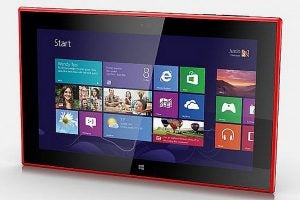 Windows tablets don’t tend to come in ultra-low storage options like Android devices, because Windows 8.1 eats a fair amount of internal memory by itself.

The Nokia Lumia 2520 and Surface 2 come in 32GB and 64GB versions, and both have microSD card slots that support the SDXC format. This is what enables super-high capacity 64GB microSD cards. They don’t come cheap, though, selling for around £80.

One area where the Nokia Lumia 2520 clearly wins in this comparison is wireless connectivity. It has 4G (LTE) connectivity where the Surface 2 is a Wi-Fi-only tablet for now – although there is some talk of a 4G version making its way to us in 2014.

The Lumia 2520 also has NFC, which is missing from the Surface 2. Nokia’s motivations for this are pretty clear – most of the Lumia-series phones have NFC, and keeping it in the Windows tablet will let the two communicate. It’s not a must-have, though, and we’re yet to see exactly what you’ll be able to do with it, Lumia-wise.

In terms of wired connectivity, the Lumia 2520 does not have a similar advantage. The Surface 2 has a micro HDMI video output and a USB 3.0 port. That’ll let you plug in mice, keyboards and USB sticks – all very useful in a Windows tablet.

The Lumia 2520 has a micro USB 3.0 port, meaning you’ll need a converter cable to plug in mice and so on. There’s no video output socket on the tablet either, and to get full-size USB ports you need to buy the clever keyboard case. Once more Microsoft is all about practicality for the hardcore user.

Keyboard modules are important in any Windows tablet, because they frequently have to double-up as laptops. Why buy a Windows tablet if that’s not what you’re after?

With a Microsoft Surface 2 you get much more choice. There are ‘touch’ and ‘type’ covers, each offering a slightly different typing experience. The ‘type’ one has moving keys, while the ‘touch’ cover has non-moving keys that use sensors on/under the surface, feeling more like a ‘touchscreen’ surface in-use. The best bit, though – both have a backlight, for typing in the dark.

All of these keyboard modules are pretty expensive, though. You’re looking at a hundred pounds or more for each – we recommend looking for a tablet bundle that already includes one to save some money.

Why? Because Windows 8.1 RT is designed for devices of a spec that doesn’t quite match a ‘proper’ computer. If you asked a Snapdragon 800 processor to do too much in Adobe Photoshop, while having a half-dozen browser windows open, it would probably start crying.

The limitations of Windows RT are probably the gravest issues of the Lumia 2520 and Surface 2. And you need to give them serious consideration before buying either.

The tablets have slightly different approaches to their cameras. Microsoft clearly believes the front camera is more important than the back one. The rear camera is still higher-resolution, but relative to their respective standards, the front one is much higher-end.

The Surface 2’s front camera has a 3.5-megapixel sensor, much higher-res than seen in most tablets and phones. This should let it capture good-quality 1080p resolution video. Microsoft says the sensor is much, much larger than it was first time around too, although it hasn’t yet revealed full tech specs of its cameras (sensor size, aperture and so on).

On the back of the Surface 2 is a basic 5-megapixel camera without a flash.

The Nokia Lumia 2520 has opposite priorities. It’s the back camera that sounds reasonable here, not the front one. Its 6.7-megapixel resolution and 1/3.4” sensor aren’t particularly notable, but it offsets them with a fast f/1.9 lens. That’s among the fastest lenses you’ll see in phones and tablets.

On the front is a more commonplace – but still fairly decent – f/2.4, 2-megapixel camera.

The Nokia Lumia 2520 and Microsoft Surface 2 match each other very closely in terms of specs, but these are really very different devices in other respects. Nokia’s tablet is cheerier, much less obsessed with replacing a laptop and more concerned with feeling right as a standalone tablet. We imagine business folk may get on better with the Surface 2, but then we’d advise them to either upgrade to the Surface Pro 2 if possible – or a ‘proper’ laptop.

With the issues of Windows 8.1 RT looming, we’re not convinced either of these tablets is destined to be remembered as a roaring success, though.