Do you go iPhone 6 or Nexus 6? iOS or Android? One’s much bigger, but which is better?

The Google Nexus 6 is one of the biggest phones we’ve had our hands on. While we don’t love it in the same way we did the Nexus 5, it’s inevitably going to be compared to its rivals like the iPhone 6.

You might think that the iPhone 6 Plus is more of a match for the Nexus 6, and that’s true in terms of size. But when it comes down to it, the Nexus 6 and the iPhone 6 are Google and Apple’s flagship smartphones for 2014 and most of 2015 – and the two visions are surprisingly different.

Here’s how they match up.

These two flagship phones couldn’t look or feel much more different. The Nexus 6 has taken on an aluminium trim that at a stretch could call to mind previous iPhones, but this one’s rounded and the rear of the device is plastic.

The iPhone 6, meanwhile, has stepped away from the iPhone 4’s metal-rimmed design template in favour of a flowing, curved all-metal back.

The Nexus 6 design is essentially a larger version of the Moto X 2014, complete with the same rounded back and exaggerated ‘M’ dimple.

Having lived with both, the Nexus 6 is significantly more troublesome to use in one hand. It doesn’t feel all that comfortable to use either so the 6 wins this round. 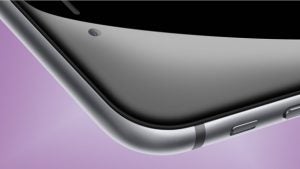 It’s not just the Nexus 6’s expansive, contoured body that dwarfs the iPhone 6 – check out that screen.

At 5.9 inches, it tops the iPhone 6’s big brother, the iPhone 6 Plus, by almost half an inch. It’s bigger than the iPhone 6 display itself by 1.2 inches.

If that feels like a bit of a mismatch to you, wait until you see the difference in resolution. The Nexus 6’s 2560 x 1440 QHD resolution provides several times the sheer number of pixels of the 1334 x 750 iPhone 6.

That makes for a pixel density of 493ppi compared to the iPhone 6 display’s 326ppi. Of course, the difference is less noticeable given the smaller display of the iPhone 6, but the Nexus 6 undoubtedly wins on the sharpness stakes.

Then there are the relative merits of the two display types. The iPhone 6 sticks with Apple’s class-leading LCD panel, albeit with some improvements to construction. The result is a well-balanced picture that really pops from the screen, with exemplary viewing angles to boot. The Nexus 6 has an AMOLED display, meaning it provides a more vibrant, contrasty picture and deeper blacks.

If you want the extra sharpness that a Quad-HD screen brings, then the Nexus 6 is the one. The iPhone 6 though is still a great screen that makes spotting individual pixels virtually impossible.

If you’re new to this game, you might think that the Nexus 6 wins the camera round. After all, 13 megapixels beats 8 megapixels, right? Well, no.

Apple has stuck with 8-megapixel cameras for several years now, yet it’s widely accepted that the company makes the best – or at least some of the best – smartphone cameras in the business.

Apple goes for fewer but larger pixels, which allows more light to hit each. Its cameras also takes and process these smaller images extremely quickly, which is great for capturing those fleeting moments. What’s more, the latest iPhone comes with phase-detection autofocusing, which homes in on the subject with freaky speed and accuracy.

The Nexus 6 camera has it all to do if it’s to beat the iPhone 6 camera, then, although it does have the advantage of optical image stabilisation for steadier pictures and videos – something the iPhone 6 Plus has, but not the iPhone 6. It also has a very slightly wider f/2.0 aperture for better light gathering.

Thankfully, the Nexus 6 camera is much better than the poor effort we saw on the Nexus 5. But, that didn’t really take much in our eyes. It’s a little slow and to open and focus – we could put that down to the awful Google Camera software – but the pictures are actually quite good. They’re sharp, with an accurate representation of colour and even low-light shots look pretty good. 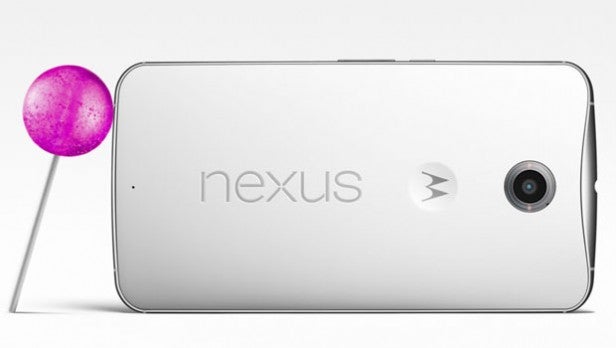 Here’s another area in which the Nexus 6 appears to wrestle the iPhone 6 to the floor with the sheer size of its specs, but again things aren’t quite that simple.

Apple’s A8 processor is clocked much lower and has half the number of cores of the Nexus 6’s Snapdragon 805, but it benefits from 64-bit architecture, a dedicated M8 coprocessor for motion sensing, and a killer GPU that tops most other chips (including the Snapdragon 805’s Adreno 420) for graphical performance.

As for the Nexus 6 having three times the RAM of the iPhone 6, well, that’s largely negated by the two distinct operating systems the phones run on. iOS is famously more conservative with its memory usage than Android.

Still, both handsets will run every conceivable app, including the latest games, flawlessly – and for a good few years to come, no doubt. 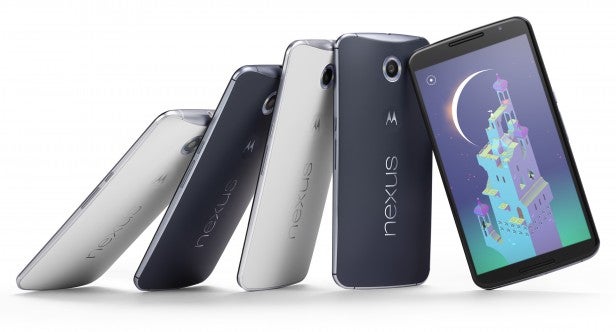 The Nexus 6 was the first device (alongside the Nexus 9) to ship with Android 5.0 Lollipop. This layered look quite the departure from the ultra-functional Android that we’ve all grown to know and love, with blocks of colour and groovy effects like real-time shadows applied to the UI.

On the other hand, iOS 8 on the iPhone 6 is a known quantity. Regardless of the glitches and bugs that have accompanied its launch, iOS 8 is a big step forward from iOS 7 – not in terms of its style, which retains the flat approach introduced in last year’s update, but rather with its under-the-bonnet workings.

We can confidently say this: these are the two finest mobile operating systems in the business. 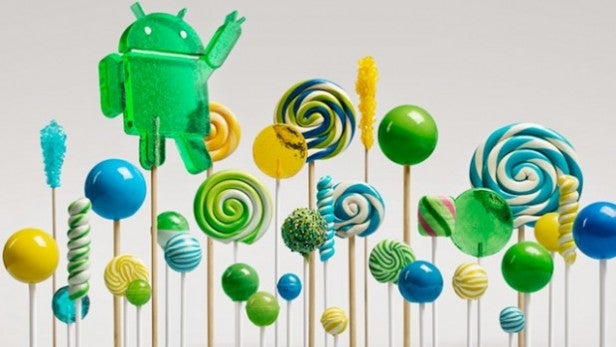 Neither phone comes with expandable storage, but they take quite different approaches (surprise surprise) to the fixed options.

The iPhone 6 probably wins out here for offering more options, and because one of those three options is a whopping 128GB model.

However, we reckon that Apple dropped the wrong model when it got rid of the 32GB option, given how consistently most people fill up 16GB of storage these days (well within a year of ownership in our case).

The Nexus 6, on the other hand, starts from 32GB – a far more sensible base amount.

Next, read our guide to the best iPhone 6 deals

The iPhone 6 and the Nexus 6 are two very different beasts, but it’s important comparing them becuase they’re the flagships of the two of the biggest players in the mobile. They’re also the showcases for the latest versions of iOS and Android.

While Google seems to have forced Apple to accept that big phones are the future, and Apple has similarly shown Google that premium design – in both hardware and software – is important, these are still two very different phones. And we love that.

For most people, the iPhone 6 is the pick of the duo. It might lose out in the spec war, but it’s the more rounded device – with an excellent camera and the best version of iOS yet.