The Nexus 5 is possibly the best-value Android phone of 2013. But does it really offer enough to compete with the iPhone 5S, or is it just a mid-range phone playing with the big boys?

We’ve compare the two to find out.

Note: This comparison will be updated periodically as we spend more time using and comparing each phone

The construction of the Google Nexus 5 is one way the phone is able to sell for £300, instead of £500. It’s a matt plastic phone that doesn’t give you any access to the battery, and is formed of two parts rather than being a unibody device.

The iPhone 5S is made of more expensive stuff. It’s mostly a single piece of aluminium, apart from some glass inlays that help with wireless reception.

Both are phones that feel well-made and dense, but the iPhone 5S has the edge. The cool feel of aluminium, that iconic iPhone design and the slimmer body give it the victory here.

It’s also slightly easier to handle thanks to its significantly narrower body. There’s a clear reason why – the iPhone 5S’s screen is a whole inch smaller. The Nexus 5 is 69.2mm wide, the iPhone 5S 58.6mm. With almost a centimetre difference, the iPhone is much friendlier for small hands.

That said, LG (maker of the Nexus 5) has put a lot of effort into making the phone as narrow as possible by reducing the screen bezel. 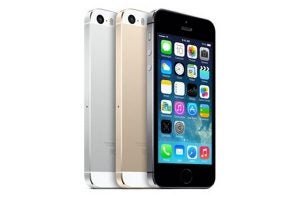 With a full inch difference between the screens of the Nexus 5 and iPhone 5S, there are clear benefits to going Android here. For movies, the Nexus 5 is clearly superior. The extra screen space makes for much more comfortable and rewarding viewing.

Discounting that the iPhone 5S has a much better games library, the screen is also better for gaming. A big, bright 5-inch display is much more immersive than the iPhone 5S’s 4-inch one.

Looking in a more abstract sense, the Nexus 5 and iPhone 5S screens are fairly even. They both have pixels tightly packed enough to make images and text appear super-sharp, and hide that the screen is made up of pixels at all.

They both also use the same screen type – IPS. This is a kind of LCD screen designed for solid angled viewing – and both displays provide good colour and contrast, and black depth. 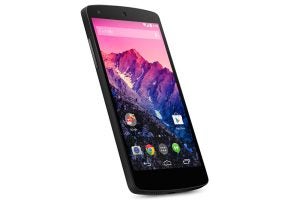 A much more important question than which hardware to go for is the ecosystem to pick – Android or iOS. Both phones run the very latest version of their respective systems – iOS 7 and Android 4.4 KitKat.

These days, both are very fast and look good – before iOS 7 the Apple mobile OS was starting to look a little musty.

The main benefit of iOS is that it offers the best apps and games selection. You just can’t beat the App Store.

With Android, you get much more control. You can change keyboards, tweak the look of the system a whole lot more and can generally connect to other devices much more easily – whether a TV or just your computer.

We could go on, but the debate around iOS vs Android is long enough, complicated enough and emotive enough to fill several volumes.

Look at the numbers and the Nexus 5 sounds much more powerful than the iPhone 5S. It has a quad-core 2.3GHz processor with 2GB of RAM, the iPhone 5S a dual-core 1.3GHz chip with 1GB of RAM.

Many will assume the iPhone 5S is weaker, but it is actually the more powerful of the two.

The iPhone 5S is the first 64-bit phone in the world, and it’s a seriously powerful device that offers desktop-like functionality in some of the apps optimised for it. For example, in audio sequencer Garageband you can use 32 tracks instead of 16 in the non-64-bit phones (granted, full sequencers offer ‘unlimited’ tracks these days.)

In the Rightware Basemark test, which compiles scores from a number of gaming benchmarks, the iPhone 5S comes out with 15.54 points, against the Nexus 5’s 14.27 points. It’s an abstract score, but tells you that the iPhone has more 3D gaming power.

The Nexus 5 is on par with the very fastest Android phones of the moment, such as the Xperia Z1 and LG G2 (the Galaxy S4 is slower, if more popular).

In real world use they’re both supremely fast phones, and the Nexus 5 is outstanding considering the price, but in totally unemotional, hard numbers the iPhone 5S comes out on top.

The iPhone 5S has a slightly larger-than-average sensor. It is 1/3 of an inch rather than 1/3.2 inches – the standard size, and that of the Nexus 5. Larger sensors result in less noisy pictures, given the same level of processing.

The Nexus 5 also has a slower lens than the iPhone 5S – f/2.4 to the iPhone’s f/2.2. A faster lens again results in less noisy pictures, and better low-light performance.

However, the Nexus 5 has one thing the iPhone 5S does not – optical image stabilisation. This buffers the lens to compensate for any movement made while you’re taking photos, and will reduce the number of blurry photos you take.

We’ll update this comparison once we’ve had a chance to compare them properly.

Given the Nexus 5 costs just over half the price of the iPhone 5S, it’s a real bargain. It offers comparable (although slightly less) power and a larger, similar-quality screen. There are benefits with an iPhone – the Touch ID sensor is great, the build quality is a bit more impressive and the app selection is better – but if you want the most phone for the least cash, the Nexus 5 is the way to go.

Next, read our Nexus 5 vs Nexus 4 comparison