Android 4.4 is the latest version of Google’s mobile operating system. The first phone it features in is the Google Nexus 5, and we’ve been using that mobile to find out what’s new in Android 4.4, known as KitKat.

New features win most of the spotlight in any Android update, but one of the most important changes in Android 4.4 KitKat is its new approach to interface design.

The software doesn’t look radically different, but there are some quite fundamental, important alterations. The line that used to separate the shortcut icon dock from the rest of the home screen has disappeared, and so have the apps/widgets tabs in the apps menu.

It may sound trivial, but makes Android 4.4 much simpler, visually, than Android 4.3. And this change has clearly been made following some careful thought about how people actually use the system. 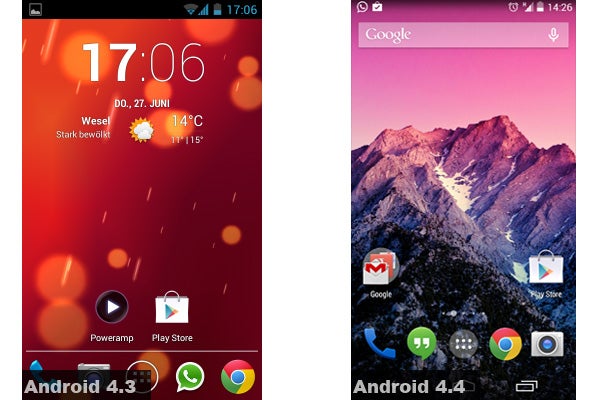 The blunt truth – people don’t change widgets much. You generally find a clock you like, and perhaps one or two more utility widgets if you’re a bit of a techy fan, and you’re done. By filing the widgets menu away, out of plain sight, Google has made the system look a lot more rudimentary, in a good way.

Adding widgets is still easy, though. Hold a finger down on an empty part of a home screen and a wallpaper/widgets menu pops up. We’re not yet sure if the widgets tab will remain in the Android 4.4 tablets, though.

You’ll also notice that app icons have been given a refresh. They’re now a bit curvier, a little bit more cartoony. 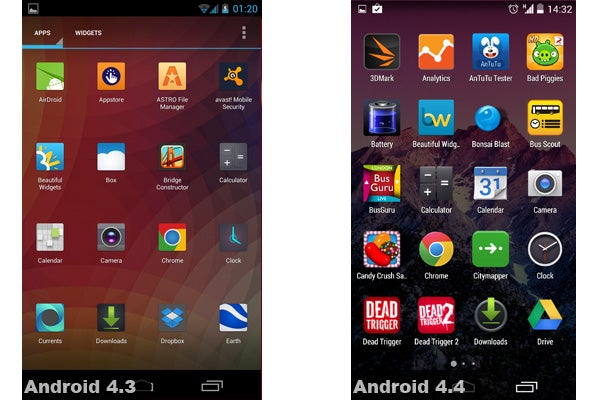 Android 4.4 KitKat’s friendlier look should make it easier for technophobes to get on with. And its pared-back style is marginally better to use all-round. However, anyone who’s used Android recently will feel at home. Basic navigation hasn’t changed – it has just been given a bit of an intelligent spring clean.

The notifications bar is very simple compared with that of most custom Android user interfaces, though. There are no feature toggles and no brightness slider on the top level – features we find pretty useful. Instead, getting to these things takes a couple of taps. 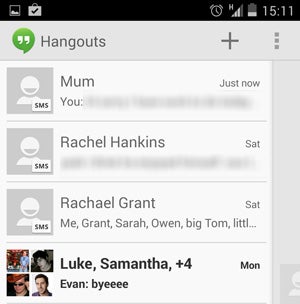 Like iOS, Android is also continually merging with its desktop relatives a bit.

There’s deep integration with Drive – Google’s cloud storage service – and SMS text messaging has been folded into Google Hangouts, the online chat side of the Google Plus social network.

It’s a pretty aggressive move that wants to nudge things like Whatsapp out of the picture, but it is terribly easy to use and dead handy if you already have a pretty Google-centric digital life (i.e. you use Gmail).

However, Google has hedged its bets on this one. In the Settings menu there’s a separate entry that lets you specify the SMS app you want to use.

As standard, there’s only Hangouts in this menu, but you can download others from Google Play. Handcent SMS is a popular one. 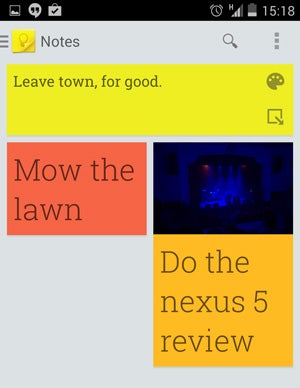 It’s not just chat clients that Android 4.4 is trying to squish, either. The pre-installed Google Keep app also wants to take down Evernote.

It lets you make coloured virtual post-its, complete with pictures and audio clips.

It’s easy to use, and also lets you create reminders for future events or tasks as well as basic notes. Keep was introduced in March 2013, but it only got more advanced features in August 2013.

For example, you can now set location-based reminders – it’ll give you a buzz with the reminder once your phone’s GPS realises you’re in the right spot.