Thinking of trying out iOS 9? Here’s a run down of the installation process and precautions to take before enrolling in the public beta

In case you missed it, for the very first time Apple is offering the general public and not just developers the opportunity to try out the latest iOS update ahead of its Autumn release.

It’s not the fully finished version of Apple’s latest mobile OS instalment so there will be some bugs or missing features like the News app, which is currently US-only.

We’ve already covered what’s new in our round-up of the key iOS 9 features. So once you’ve had a read of that, and you’re convinced you want an early play, here’s how to do it.

Unlike getting an early look at Android M or Windows 10 Mobile, things are a little more straightforward with the iOS 9 public beta.

Here’s a blow-by-blow account of the quickest way to get iOS 9 on your iPad or iPhone and the what you need to do before going beta. 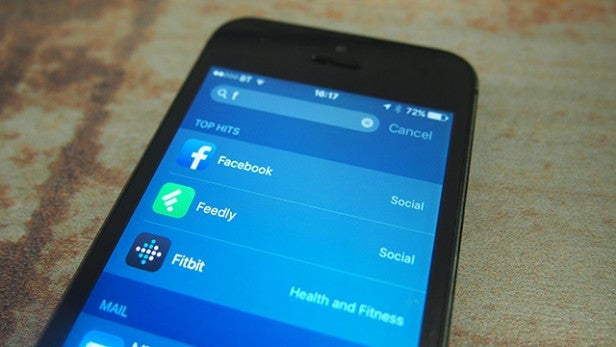 Now, we should explain that by accepting to move to iOS 9 right now does mean things won’t run as smoothly as iOS 8.4 or earlier.

The first thing you’ll need to know is if you have a compatible device. For iPhones, it will run all the way back to the iPhone 4S. For iPads, it goes back to the second gen tablet and includes all iPad Mini models. iPod Touch fifth generation owners can also get in on the action.

Now if you do want to try it out but also have the option to go back to a more stable version of iOS, there’s a way to to it.

The first thing you need to do is make sure all of your iTunes content is backed up to a computer. If you use Apple’s iCloud storage service, then it’s worth backing up content there as well if you’ve got enough room.

If you want to go the route of backing up and archiving to iTunes, then make sure whichever PC or Mac you’re running iTunes on has the latest version. That should be version 12.2 and you can check that by going clicking on the status bar when iTunes is open and selecting About iTunes.

SEE ALSO: What’s the best cloud storage service to use? 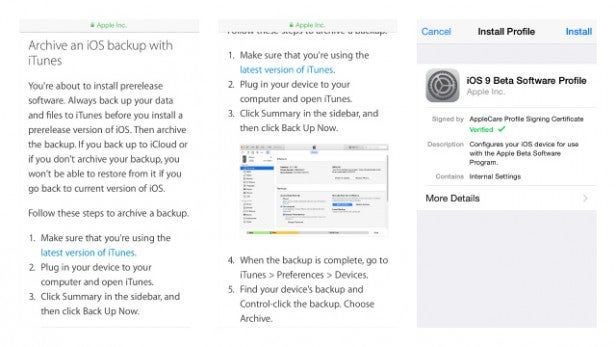 Once you’re up to date, it’s time to plug your iPhone, iPad or iPod Touch into your computer. Next, go to the sidebar in iTunes and select the connected iOS device. On the right look for the option to Back Up Now. This can take a few minutes or longer depending on how much stuff you’ve got on there.

Once that’s completed, you now need to back to the search bar, select iTunes, then Preferences and finally Devices. Here you can view all of the devices connected, Pick the one you’ve backed up and right click to Archive.

When you need to go back to the backed up version of iOS is running on your device, you can set your phone to recovery mode by turning it off, plugging the device into the computer, then holding down on the power button until the words Connect to iTunes appears. Next you’ll need to choose the option to Restore from Backup and you’ll be able to select from the back up you made before installing the iOS 9 beta. 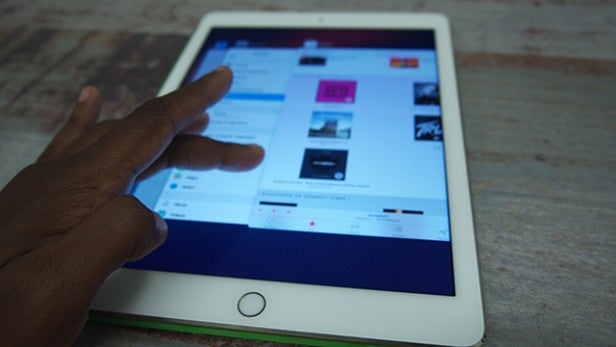 With the safety precautions out of the way, it’s now time to get installing. The first thing you need to do is go to the Apple Beta Software Program and sign up. This is pretty straightforward as all you’ll need is your Apple ID and password you use to make App Store purchases with. That should only take a few minutes.

Now, from the iOS device you want to run iOS 9 on, head back to the Apple Beta Software Program page and log in. Now you should see the option for playing with El Capitan and IOS 9. Select iOS 9 and then it’s time to enroll.

You’ll need to click this beta.apple.com/profile link to download the files needed for iOS 9. Once that’s done, you should be able to go to the Settings menu in your device and have the option to Install. Once you agreed to the terms of the beta, follow the steps and restart your device to start that familiar installation process.

You’ll have to wait the usual amount of time as you would for an iOS install and then after a brief setup, you should be good to go! 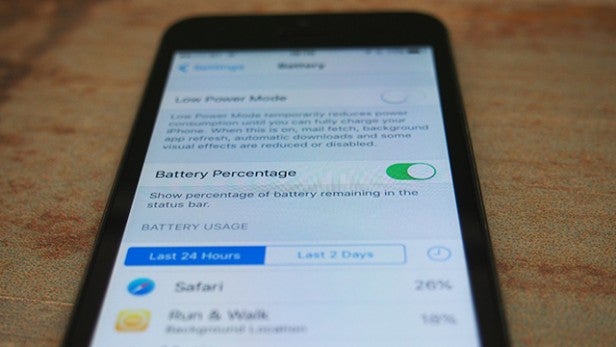 What should you look out for in iOS 9 public beta?

Having successfully installed the iOS 9 beta on an iPad Mini 2, an iPad Air 2 and the iPhone 5 our initial experiences have been a mixture of good and bad. Some apps have unexpectedly crashed or simply freeze. But there’s enough of the new features to have a play with.

You can swipe left for the smarter search, adjust the sound quality in Apple Music, activate the iPhone-only power-saving mode and access the Windows-esque multitasking. That’s just a few of the things we’ve noticed in our early play.

Have you installed the iOS 9 public beta? Let us know what you make of it or if you’re having any problems gettting it up and running in the comments section below.