Are you Android or iPhone? It has become a defining question of the last decade in tech. The two platforms represent a different approach to the mobile phone, and each suits a different kind of person.

The iPhone 5S and Samsung Galaxy S5 are the key flag bearers for these platforms, and they are also two of the very best phones in the world right now. But which one is better?

We’ve compared the  Galaxy S5 and iPhone 5S to find out.

The Galaxy S5 is a much bigger phone than the iPhone 5S. For many people, this is the most important thing to consider.

Samsung’s phone will poke out of smaller pockets, and parts of its screen are hard or impossible to reach if you’re holding the phone in one hand. It is quite literally a handful.

Apple’s iPhones have all been much easier to grab than larger Android phones, and this is something very deliberate. 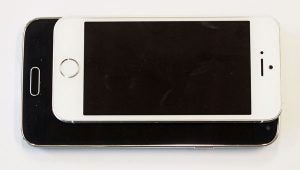 The iPhone 5S is also a better-looking phone than the Galaxy S5. The S5’s plastic battery cover has an odd dimpled texture, and in-hand the iPhone 5S feels like a much harder, more expensive phone.

There are some practical benefits to the Samsung style, though. You can prise off the back, giving you access to the battery. Not many people carry around spare batteries for their phones, but you could do so with a Galaxy S5. The iPhone 5S is a fully sealed-up phone, so if your battery goes kaput you’ll either have to send the phone off to get repaired, or get the toolbox out.

The Galaxy S5 is also waterproofed, where the iPhone 5S will not fare at all well if moisture gets near its ports. There are rubber seals on the S5’s USB flap on the bottom, and on the inside of the battery cover. 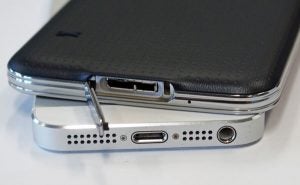 The dimensions of these phones give you a good idea of how much smaller the iPhone 5S is. The most important one here is width. Being more than a centimetre narrower than the Galaxy S5 is what makes the Apple phone much easier to handle.

Both phones are very light among their peers, but the iPhone is more than 30g lighter than the Samsung.

It’s a similar story with these phones’ thickness. These are two of the slimmest phones around, but the iPhone 5S is a little bit thinner. It is 7.6mm thick while the Galaxy S5 is 8.1mm thick.

These are two of the first phones to use fingerprint scanners. But they work in quite different ways.

The iPhone 5S TouchID scanner sits under the Home button, while the Galaxy S5 lives under the central select button – they’re in the same place, more-or-less.

However, while the TouchID sensor simply requires the presence of the digit you’ve ‘taught’ your phone to recognise, you need to swipe the finger across the Galaxy S5’s sensor. We found the Galaxy S5 hit rate to be around 50 per cent in normal use, where the TouchID scanner works more-or-less every time. Some of you may find the S5 scanner a bit annoying – although if you put a bit of effort into learning exactly how to move your finger over the scanner, the situation gets better.

The Galaxy S5 scanner has a trump card, though. It’ll offer up many more uses, as developers can use the scanner in their apps. The TouchID sensor is locked down, so it can only act as a way to unlock the phone or authorise purchases from iTunes. With the S5, you can validate Paypal  payments, making it more versatile from day one. 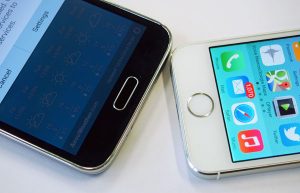 The Galaxy S5 has a much larger screen than the iPhone 5S. It is 5.1 inches across to the iPhone’s four.

This naturally makes it a much better phone for watching videos on, especially as the Galaxy S5 screen is fantastic. It has much more natural-looking colours than the previous S-series phones, and is probably the best phone screen we’ve seen yet.

In last year’s comparison of the Galaxy S4 and iPhone 5S, we said that both screens were good but the iPhone had the more natural look. Super AMOLED screens have now caught up with LCD in the colour fidelity stakes, meaning that overall the S5 screen is flat-out better. 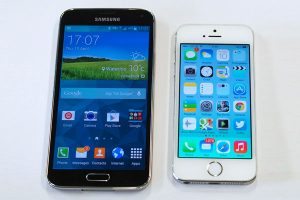 The key benefit of an OLED screen is that it doesn’t use a normal backlight and is therefore able to produce much deeper blacks, and much better contrast. In a darkened room the iPhone 5S won’t look as good as the S5 as you’ll be able to see the glow of the backlight, turning blacks slightly grey-ish.

Samsung also gives you control over the tone of the screen. The Dynamic mode gives you the vibrant oversaturated colours than have become a Galaxy S series staple, but the Standard, Photo and Movie modes give more accurate colour – which is one of the main reasons why we rate the display so highly.

The Samsung screen has more pixels per inch than the iPhone too, but we think they’re roughly on-par in terms of the level of sharpness they offer. They’re both razor-sharp at normal viewing distances.

The iPhone 5S does not have a memory card slot, so you need to pick your iPhone model carefully. It comes in 16GB, 32GB and 64GB variants, and there’s a significant price-bump for each one.

The Galaxy S5 does have a memory card slot, under the battery cover. A knock-on of this is you don’t quite get the same range of internal memory options. Most places in the UK will only offer the 16GB version of the phone, but there is also a 32GB edition about if you look hard enough.

You can buy 32GB memory cards for around £15, making a card a pretty cheap way to get more storage. 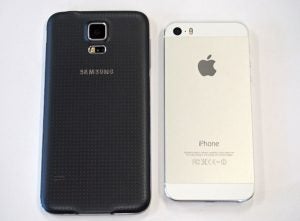 Looking at the specs, the iPhone 5S sounds like it’s a lot less powerful than the Galaxy S5. It has a dual-core CPU instead of a quad-core one, only half the RAM (1GB) and a much slower clock speed – 1.4GHz to the S5’s 2.5GHz.

However, in reality the iPhone 5S offers pretty comparable power, not least because iOS is generally more efficient and controlled than Android. In the 3DMark test, they come out with roughly similar scores, and it thoroughly outclasses the Galaxy S5 in the browser-based SunSpider test – which measures java rendering speed.

Much as you might think the iPhone 5S is a bit of a has-been because it has been around for a lot longer than the Galaxy S5, it’s actually about as powerful.

Why do we care about 64-bit? A 64-bit system can theoretically process data in larger chunks than a 32-bit one, so it becomes important as systems get more powerful, and applications more intensive. With iOS, having the latest processor lets you do things like use more layers in art apps, and more tracks in music sequencers.

These are the kinds of apps that are much better served by iOS than Android anyway, so we’re not sure how useful the 64-bit part of future Androids will really be. It’s something for the Galaxy S6 to tackle.

In good lighting you will get more detail out of the Galaxy S5, and it also has a pretty good low-light mode that merges together multiple shots to get you more detail and less noise. The iPhone 5S is good at making out object in low light – and is quicker at taking those shots – but the results will still be fairly noisy. 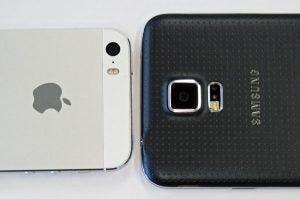 Samsung has also packed some new hardware into the S5’s camera. As well as the new ISOCELL sensor, which offers better colour reproduction, you get hybrid phase/contrast detection autofocus.

This offers faster focusing than most rivals in most conditions, including the iPhone 5S in some cases. However, the overall impression is of a phone that’s roughly as fast as the iPhone – not dramatically faster.

The biggest advantage of the Galaxy S5 in this fight is its screen. Samsung’s latest Super AMOLED display offers all the benefits you normally get with LCD (natural looking colours, brightness), along with the spectacular contrast and black levels of OLED. Screen size is important too – watching a film on the Galaxy S5 would be much more fun than doing so on an iPhone 5S.

However, if this is not a huge priority, the Galaxy S5 doesn’t categorically beat the iPhone 5S in that many other respects. The capabilities of the core hardware are somewhat similar, and while the Galaxy S5 can produce more detailed photos, its new focus style only brings it to around the same speed as the iPhone in use.

There are key benefits to an iPhone as well – it is a more manageable size, it still offers a richer apps and games library and iOS 7 is much more reliable than Android 4.4 after it has been given the Samsung TouchWiz interface treatment.

We’ll be updating this comparison soon, however, so we can give a more definitive verdict that includes camera tests and battery life comparisons.

Next, read all you need to know about the iPhone 6