The Galaxy S5 and Xperia Z2 are Samsung and Sony’s two top Android phones for 2014. They both cost upwards of £500 and are sure to sell by the million.

But which should you buy? It’s not an easy question to answer, and we gave both phones a positive review.

However, there are differences, and benefits to each. Read on to find out which you should buy.

These phones are roughly the same size, and sell at a similar price. But their constructions are pretty different. The Galaxy S5 is mostly plastic where the Xperia Z2 is made of glass and metal.

The Sony phone is a lot slicker-looking, with the sort of shiny and sophisticated design you might associate with the company’s high-end TVs. Samsung’s Galaxy S5, on the other hand, is a bit of an oddball.

Its back is pitted, to help give it a different look from the Galaxy S4 and to improve grip a bit. It looks a bit unusual at first, and it’s no jaw-dropping beauty. But you do get used to the look, and the soft finish feels pretty good. 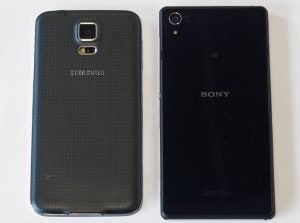 The Galaxy S5 comes in four colours at launch, but not all of them have quite the same finish, though. There are black, white, blue and gold varieties, and the white feels a lot more plasticky than either the blue or black. Avoid the white if you want a nice soft touch feel, and we recommend avoiding the gold unless you’re into your gaudy-looking phones.

As the Xperia Z2’s colour is mostly under the glass surface, there’s no real difference in feel between the three colours on offer. You can get black, white and purple Z2s. The latter is particularly eye-catching.

The Sony has more consistent finishes, and it feels a bit more expensive – a bit more like a £500-odd phone. The Galaxy S5 doesn’t feel bad in-hand, but those expecting it to feel conspicuously like the world’s best phone – as it is sold in many places – may be disappointed. 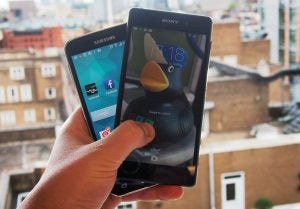 While the Galaxy S5 looks and feels a bit cheaper than the Xperia Z2, we find that in pure practical terms it’s a bit easier to get on with.

It’s a little smaller, and its more curvy body makes the Galaxy S5 feel more petite than the Z2. The boxy design of the Sony phone means it maintains most of its width right to the edge of the phone, where the Galaxy S5 back tapers at the rear, making it fit more comfortably in the hand.

So while the Galaxy S5 is itself a fair bit bigger than the Galaxy S4, it’s still easier to handle than the Xperia Z2.

The Galaxy is just under 20g lighter too, although we don’t think this sort of weight disparity is worth worrying about. It’s handling that is the issue here, and the Galaxy S5 makes day-to-day use that little bit easier. 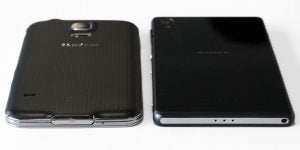 One of 2014’s most in-fashion phone features is water resistance. Of course, Sony has been doing this for a while, so it’s no surprise that it offers slightly better water resistance than the Galaxy S5.

Both phones use rubber seals to keep water and dust out, but they are in slightly different places thanks to the differing modes of construction. The Galaxy S5’s removable battery cover is lined with a thin rubber strip, and the USB 3.0 port on the bottom is covered by a rubber-lined flap.

The design of the battery cover means there’s some room for grime to get in certain parts of the phone, but waterproofing in ‘normal’ phones like these isn’t meant to be tested daily anyway.

The Xperia Z2, on the other hand, is essentially fully sealed – the back isn’t removable – so just needs a couple of flaps to provide access to the SIM and charging port. They are big and obvious, but are in-keeping with the slightly industrial-looking design.

Neither phone needs a flap for the headphone jack, thankfully, as the sockets are fully sealed. 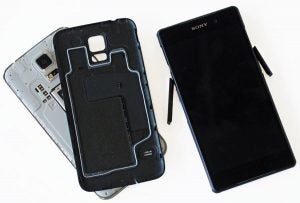 The average user may think of these phones as ‘waterproof’, but the Xperia Z2 is rated slightly higher. Where the S5’s IP67 certification means the phone can officiually be dunked in water up to 1m deep, Samsung recommends not taking it near salt water or really submerging it at all. In contrast, the Xperia Z2 is IP58 certified, which means it’s essentially completely sealed so can go a bit deeper and withstand fairly powerful water jets too.

The Xperia Z2 is the clear winner on this front, but both phones will prove a little annoying for some of you. The issue? You need to reseat the flap that covers the USB port whenever you charge the phone. And for most of us that’ll be every day. Unless, of course, you get either the wireless charging back for the S5 or the charging dock for the Z2.

The Xperia Z2 has a slightly larger screen than the Galaxy S5, but there’s not much in it. The Z2 screen is 5.2 inches across, the Galaxy S5 5.1 inches. It’s not the sort of difference you’ll notice much unless you get the tape measure out.

They are the same resolution as well – both are 1080p phones. We’re likely to see 2k screen phones appear later this year, but unless you’re a real spec-head, it’s not worth waiting for them. These screens already look very sharp.

Performance in both is pretty impressive too. Both offer excellent colour accuracy and great contrast. Each marks a step on from its predecessor. 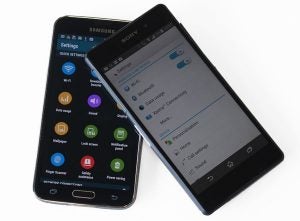 The Galaxy S5 has a slight edge, though, because its Super AMOLED display is capable of maintaining truly deep-looking blacks even when in a completely dark room. Now that Samsung has sorted out its colour accuracy issues – a big issue with previous-generation AMOLED phones – it has truly made a class-leading screen.

And if you like larger-than-life colours, the Galaxy S5 offers them thanks to its various screen modes. In the most muted of modes, Cinema, the Galaxy S5 brings more accurate colours than even the Xperia Z2.

For a while, it looked like high-end Androids were going to stop using memory card slots. However, all of this year’s most important Androids let you use microSD cards.

In the Galaxy S5, the slot lives under the battery cover. In the Xperia Z2 it sits under a plastic/rubber flap on the right edge.

Both phones use a microSIM too, currently the most popular type among higher-end phones. The HTC One M8 and iPhone 5S are the most obvious aberrations, using nanoSIMs – which are even smaller.

Having expandable memory reduces the appeal of the Xperia Z2’s and Galaxy S5’s higher-capacity models, though. In most places in the UK you’ll only find the 16GB versions of these mobiles. There are 32GB versions too, but the lower-end edition will be far more common here. But when a 64GB microSD card costs just £20-£30 storage really shouldn’t be an issue. 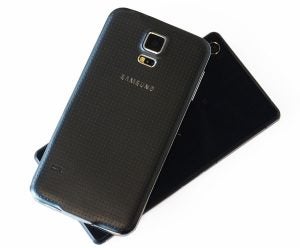 These two phones both have Snapdragon 801 CPUs. This is the latest (as of April 2014) Snapdragon processor, but new chipsets are already on the way. We’ll see Snapdragon 805 phones later this year, and Snapdragon 808/810 devices in early 2015.

However, it is a powerful processor. Both models are quad-core, but the Galaxy S5 version is clocked slightly faster – at 2.5GHz to the Xperia Z2’s 2.3GHz. A slight step up like this isn’t going to cause a world-changing performance difference, but it should be slightly noticeable in benchmarks.

The Xperia Z2 has its own spec win, though. It has 3GB of RAM while the Samsung has 2GB. Much like the clock speed difference, it’s not going to alter day-to-day performance much, as this is so dependent on software optimisation. 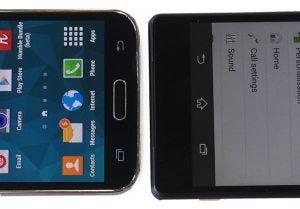 After using the phones for a few weeks after launch, we found that the Xperia Z2 offers marginally better everyday performance. Its interface is a good deal lighter than the Galaxy S5’s TouchWiz, and the S5 tends to slow down and become quite erratic when the system starts to run low on resources. You really need to make sure there’s plenty of spare storage when you use a Galaxy S5.

Benchmarks show that the two phones are roughly comparable when pushed. In 3DMark, the Galaxy S5 scores 18,600, the Z2 18,430. That’s a negligible difference.

The Galaxy S5 and Xperia Z2 have two of the most accomplished mobile phone cameras on the market. We’re not generally people to be swayed by megapixels, but they also have two of the highest-resolution sensors around too.

The Galaxy S5 sensor is a 16-megapixel setup while the Xperia Z2 goes even higher-res with 20.7 megapixels. However, even Sony seems to admit that a tiny mobile phone sensor can’t do much with that high a resolution. In most camera modes the phone is restricted to taking 8-megapixel photos, using the extra pixels to enhance image quality/accuracy. 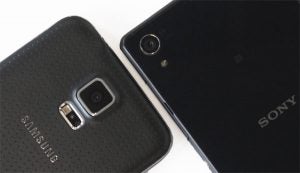 Although this strategy does make sense, and the Xperia Z2’s 8MP photos do look cleaner than its 20MP ones, we found the Galaxy S5 was able to harvest a bit more detail.

In many conditions the cameras are fairly evenly-matched, though. And the Xperia Z2 offers oodles more creative filters and fun modes for the kids, if that’s your bag. 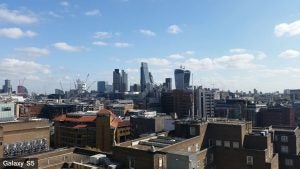 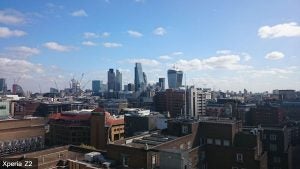 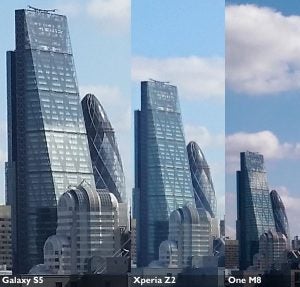 Still, there are some places where the Galaxy S5 camera wins outright. HDR is the most important. Samsung makes one of the most effective HDR modes in the business, improving many normal photos without making them looking unreal and adding a bit of photographic magic to sunsets and backlit scenes. The Xperia Z2 has HDR as well, but it’s just not quite as good: 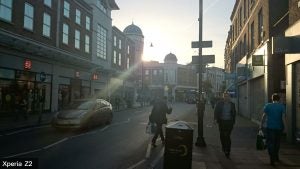 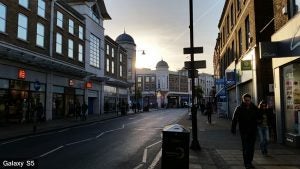 The Xperia Z2 HDR mode is OK, but the Galaxy S5 one is far better. Check how much more punchy and full of contrast the S5 shot is here.

In low light, they both fare surprisingly well. The Xperia Z2’s downscaling of images lets it take pretty good snaps quickly while the Galaxy S5 really takes its time on photos. It can take up to 5-6 seconds to take a shot, but they’re almost universally pretty good as long as you have a steady-ish hand. For speedy night shooting the Z2 is much better, though.

If you care a lot about having a phone that feels as expensive as the money you shelled out for it, the Xperia Z2 is a better buy than the Galaxy S5. And we feel its software is a bit more reliable at launch.

However, in a few other respects the Galaxy S5 is a bit better. It has a slightly superior screen and the camera is a smidge more versatile if you don’t need fancy filters.

The conclusion? We don’t have a definitive one. However, you need to consider the pros and cons we’ve outlined here carefully.