Apple Watch Sport or Fitbit Surge sports watch? We look at how the sporty timepieces compare

Whether it’s getting runner and model Christy Turlington Burns to demonstrate to talk it up on stage or giving us a glimpse into the health and fitness testing lab, the Apple Watch is a wearable aiming to banish the need for keeping a separate activity tracker or sports watch around your wrist.

While Apple is pushing the fitness credentials of its first ever smartwatch, the Fitbit Surge is already available and is all about keeping you in shape.

As Apple tries to take a bite out of the growing fitness wearables market, we see how it compares to one of its closest rivals as we pit the Apple Watch against the Fitbit Surge.

As we’re comparing these two wearables on their fitness prowess, having a look at the hardware features is a good place as any to kick off.

The first thing that puts the Fitbit Surge out in front is the inclusion of on-board GPS, a feature the Apple Watch doesn’t have. Having GPS is vital for runners who want to accurately track their routes and steps and it’s a real shame that Apple hasn’t decided to implement it. Although, that’s likely has something to do with the slightly precious battery life.

Having GPS built-in also gives you the option of tracking your route without a phone connected, another bonus. Especially if you have to carry around the iPhone 6 Plus while you pound the tarmac. 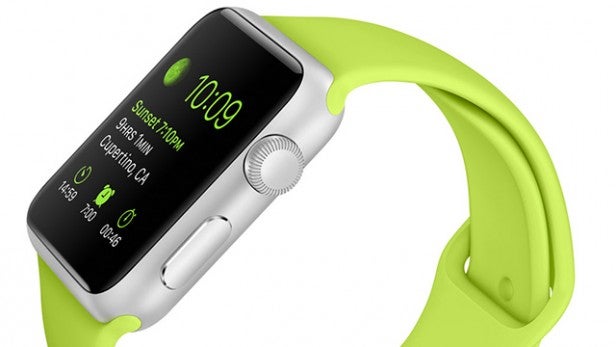 GPS is far from common place on smartwatches though, with Sony’s SmartWatch 3 currently the only Android Wear device to pack GPS, but it’s a mainstay on serious running watches.

The other hardware addition that serious runners will immediately look for is a heart rate sensor of some kind. Thankfully, both the Surge and the Apple Watch get a big tick in this category.

Fitbit’s Surge uses an optical heart rate sensor, storing data at 1 second intervals while you exercise and every 5 seconds when you’re going about your day to day business. This is pretty impressive, as it doesn’t require you to manually hit a button to learn your heart rate.

We’re still not completely sure how often the Apple Watch will automatically check your heart rate, but the infrared LEDs on the device’s rear should give you an accurate reading when it does.

The hardware additions detailed above are only part of the story though. It’s what the watches can do with them that make the real difference.

The Fitbit Surge will help track a variety of activities including the obvious ones like cycling and running along with cardio and strength training. It’ll also do the basic fitness band tracking like keep a daily tally of your steps, steps climbed and calories burned.

There’s also sleep tracking, measuring the quality of your slumber, but even though we’ve used this feature on a number of devices for a few years, we’re not quite how useful or infomative that data is.Thankfully though, the sleep features are all enabled automatically so you don’t need to press a button before you shut down for the night.

Apple has decided to split its activity tracking into two separate apps on the Watch. There’s Activity and Workout. 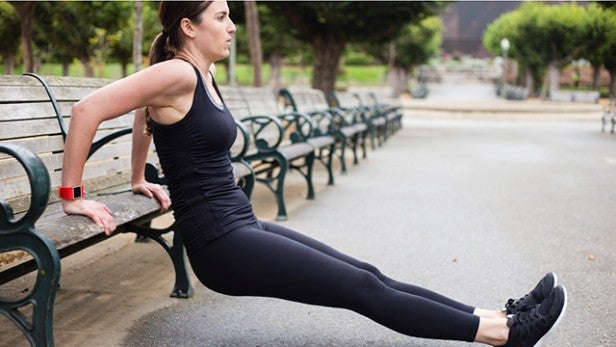 We like to think of Activity as the more basic of the two, the one that’s likely to get more use from the less serious of athletes. It tracks your daily movement and rest, giving you the results in a colourful ring and then it’ll sync everything back to your iPhone if you want to delve in deeper.

Workout, on the other hand, is a little more feature-packed. This is the app you’ll open when you’re about to start a specific run or gym session and it’ll show you real time stats. These include elapsed time, distance, calories and pace. Basically all the information you need.

Unlike the Surge, the Apple Watch doesn’t come with any sort of built-in sleep monitoring. An odd emission, even if we’re not sold on the idea, but one that we’re sure will get added over time. Either by Apple or, more likely, developers.

If there’s one thing that sets the Apple Watch apart from the Fitbit Surge more than any other, then it’s the addition of WatchKit and the ability for developers to create additional apps for the wearable.

This means that we’ll see a whole bunch of extra features added that Apple hasn’t included, like the sleep tracking we mentioned earlier. They’ll be different apps to track your movement, ones for specific activities and much more. The Apple Watch will expand and grow and over time and, hopefully, become much more useful.

That’s not to say that software on the Surge is bad, actually far from it. The operating system is easy to navigate and as it’s purely focused on fitness tracking, it’ll be much easier to quickly get into a run that on the Apple Watch. Fitbit’s platform also has generous third party app support, which means functionality grows as long as developers continue to support it. 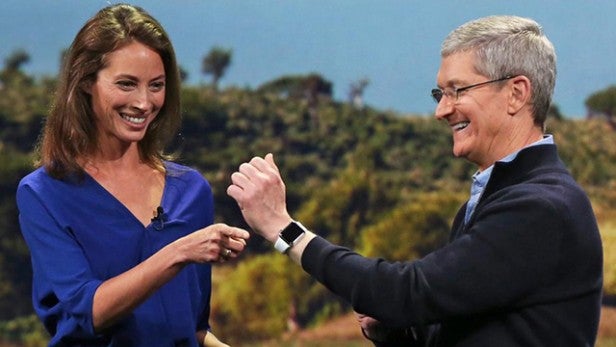 We have to say that we’re big fans of Fitbit’s selection of companion apps, they’re probably only second to Jawbone in terms of UI, features and ease of use.

The mobile app, which is compatible with iOS, Android and (rejoice) Windows Phone, is jam-packed with features. Your workouts are recorded, routes mapped and saved and taking a quick look at your daily goals and achievements is a breeze. You can also note down what you’ve eaten, the food library is probably beaten by Jawbone’s but it’s still good, and there’s slick integration with other Fitbit products.

You can also delve into your stats on the web, an addition we rather like if it is normally easier just to pull out your smartphone.

Leaderboards and competitions are included too, so you can face off with a friend if you want to add a little more bite to your workouts.

If you’ve installed the latest version of iOS, you’ll have probably noticed the new Apple Watch companion app. This mandatory app is where you’ll first set-up your iPhone, but they’ll also be another app that’ll receive data from the Activity app. In here you’ll be able to take a closer look at your stats and compare days and it will work together with the Health app to keep a track of your lifestyle.

Just like the on the Surge, the Apple Watch will give you achievements and rewards when you hits targets and goals but we’re not sure yet if they’ll any leaderboards of any kind. Another job for app developers, maybe. 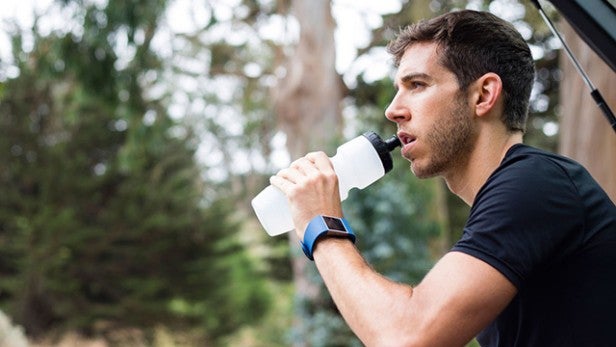 Along with packing the necessary hardware features, a bevy of sensors, stellar companion apps and support for plenty of activities, wearables designed primarily for fitness use need to be built out of strong stuff.

The Apple Watch Sport is the cheapest and most lifestyle focused member of the Apple Watch family, but it’s still much more easy on the eye and fashion oriented than the Fitbit Surge. The body is constructed from aluminium, with tough Ion-X glass covering the Retina display and a rubber strap coming as standard. It’s sweat, but not water (sorry swimmers), resistant too, a must for these devices.

The Fitbit Surge on the other hand is built to be rugged and handle the daily strain of activity. The wristband is made from a flexible rubbery material and there’s a small amount of aluminium used to make the buckle and add a little bit of a premium finish. It’s water-resistant to 5 ATM, an improvement over the Apple Watch.

While both these wearables boast a display, they couldn’t be further apart in how it acts and functions.

Actually, the Surge is the first Fitbit device to come packing a proper display. It’s a 1.25-inch monochromatic touchscreen, with a backlight for nighttime viewing and it does the job well. Information is clear and readable, text is sharp enough and it works great in sunlight.

Apple though has really pushed the boat out with the Apple Watch display, taking the Retina tech from the Macbook and iPhone/iPad lines and bringing it to the wearable. The touchscreen is sharp, bright and pixel heavy, but it’s also pressure sensitive so you can perform ‘Force Touches’ (basically a long, hard press) to access a bunch of menus and options. 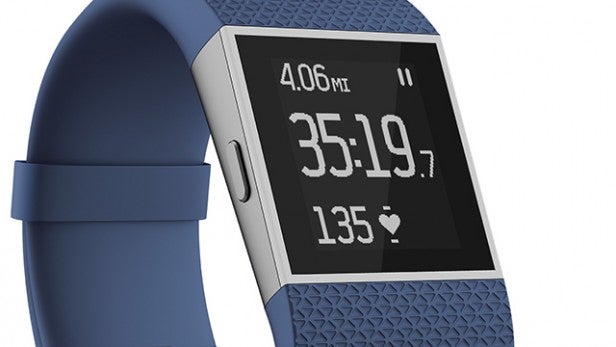 As we’ve only had short amounts of hands-on time with the Apple Watch, we still don’t know for sure how its battery will perform. Apple says you’ll get about 7-hours of power in the Workout mode with the heart rate sensor active, which seems to be long enough for the majority of activities, unless you’re aiming for an ultra marathon. Still, we’re pretty sure you’ll be reaching for the magnetic MagSafe charger every night.

Fitbit’s Surge does certainly perform much better in this category, giving you about 5-days worth of juice from a single charge (which, if you were wondering takes about an hour) even with the heart rate sensor constantly picking up data.

While not the defining feature of a fitness focussed wearable, easily being able to glance down and check your notifications is a bonus that we appreciate.

Both these devices will buzz and alert you of any incoming calls or texts, but the Apple Watch will be able to handle more third-party notifications (from Facebook, Twitter, WhatsApp and so).

Music playback can also be controlled from both, so you can quickly put on that confidence boosting jam when you’re about to hit the wall. 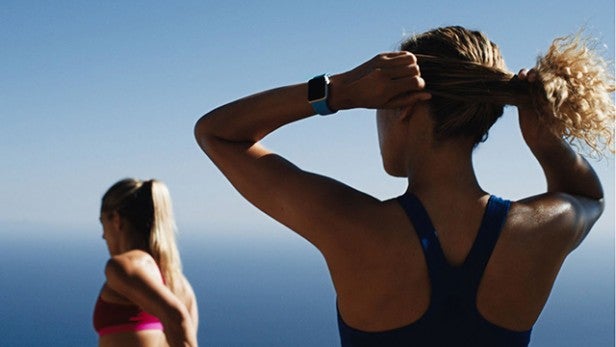 While there’s plenty of feature overlap, these are really two very different devices. The Fitbit Surge is all about fitness, with some smartwatch features tagged on. The Apple Watch is a smartwatch with some, albeit so far impressive looking, fitness features added on.

With its GPS, sleep tracking, longer battery life and constant heart rate sensing, plus all of Fitbit’s experience with its mobile companion app, the Surge is easily the more feature-packed for staying in shape.

The Apple Watch though shouldn’t be completely discounted, mainly because its WatchKit API will open the door to so many additional apps and features over time. It’s also much sleeker and has many more functions once the workout is completed.

There’s also a big difference in price, with the Surge costing £199 and the Apple Watch coming in at £299. If you’re solely looking for accurate run tracking and activity monitoring and want to save some cash, the Surge is likely to be your best pick.