What is the Sony SmartWatch 3?

The SmartWatch 3, as the name suggests, is Sony’s latest attempt at a wrist-wrapping wearable. It’s the fourth ‘smartphone companion’ the company’s come up with, if you include the LiveView.

Taking a sportier approach to Android Wear, the SmartWatch 3 is the first to include GPS tracking, so you can map activities outdoors without relying on the GPS connection from your smartphone.

While it certainly signals a step in the right direction toward making smartwatches less reliant on your phone, ultimately it’s still plagued by many of the same first-generation Android Wear issues that make it tough to recommend.

Smartwatch design on the whole has been pretty underwhelming. If you discount something vastly more expensive, such as the Withings Activité, Android Wear watches in particular have struggled to come up with an offering to rival a traditional or digital watch. The Sony SmartWatch 3 certainly doesn’t alter that viewpoint. 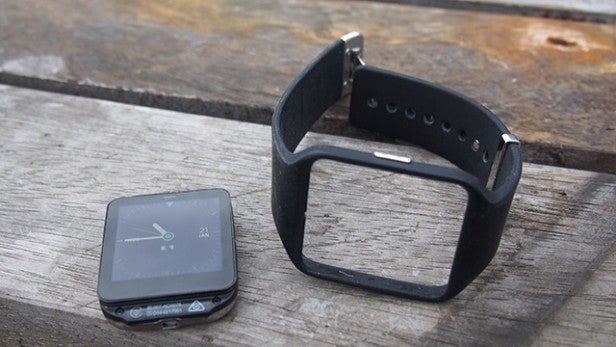 If you take the LG G Watch and squeeze a rubber strap around it, that’s pretty much what you get with Sony’s fourth smartwatch. It’s really just a bit dull and ordinary, like Sony’s Smartband activity tracker. If the intended user is an athletic one, the neutral look probably won’t be an issue when you size it up next to a dedicated sports watch, though. Despite its limited design appeal, the Sony SmartWatch 3 is comfortable to wear. There’s no skin irritation and it even does a good job of battling sweat.

The watch module is removable, so you can add different-coloured rubber straps. Those straps, however, are only available from Sony and cost £20. If you do want something more elegant, Sony has since announced a stainless steel bracelet option and it certainly works wonders when you compare it to the rubber version. Crucially, there’s no details about how much adding a metal band will cost, and could push the SmartWatch 3 over the £200 price mark. 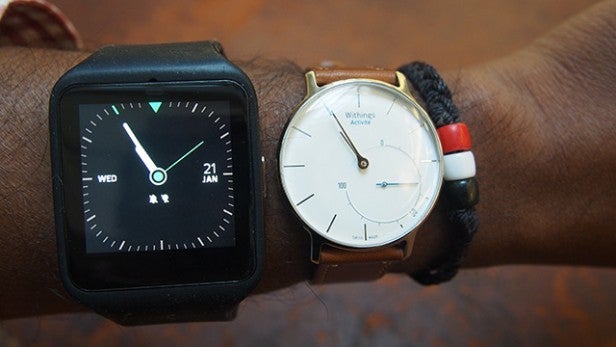 The Sony SmartWatch 3 alongside the more attractive Withings Activité

Sony has gone for a square watch face, bucking the recent trend of rival Android Wear watches in going for something circular. With a stature similar to an old-school Casio watch, it’s not a watch that dominates the wrist like the Samsung Gear S, and it weighs just 45g so it’s light enough to wear all of the time.

While we can’t wax lyrical about the design, the materials do at least feel durable and robust. The stainless steel rear is one of the nicer-looking elements of the SmartWatch 3, although the silicone rubber strap easily attracts muck and dust. With an IP58 waterproof certification, you’re safe to take it into the shower as long as you have the charging port seal firmly closed.

There’s been a slight alteration to the strap since we first had a look at it as well. Now the area of the strap surrounding the watch module has been made more rigid to ensure it stays in place. The clasp holding the smartwatch around your wrist is a similar two-part mechanism to that used on Samsung’s watches, and you can rest assured that, after some initial fidgeting, this watch is not going to budge.

Touchscreen interaction aside, there’s just a single button and that allows you to turn the device on or off, or can be held down for a reset, which we unfortunately had to do on a couple of occasions. Around the back it’s good news for anyone who hates proprietary charging cradles as much we do. Sony has included a Micro USB port, so you can use the somewhat short cable in the box or use your (non-Apple) phone’s as an alternative. 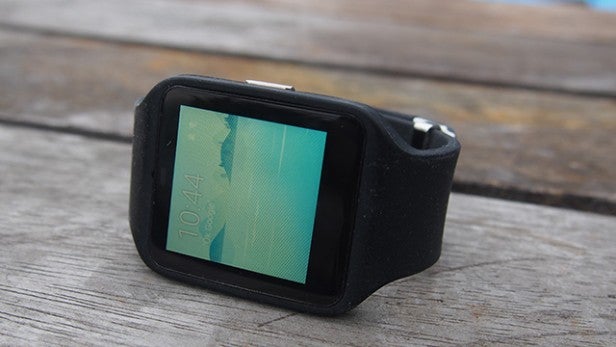 The SmartWatch 3’s 1.6-inch TFT LCD touchscreen is on the whole pretty underwhelming. Sony has done a good job of making sure it’s well protected and achieves good visibility outdoors, but if you’re looking for the best, the SmartWatch 3 falls short.

A Gorilla Glass 3 coating adds an important layer of scratch- and impact-proof durability, though the viewing angles are less than fantastic. The latter probably doesn’t seem as important as it does when you compare it to a smartphone, but it does become an issue when you’re glancing at notifications.

The 320 x 320 resolution and 245ppi pixel density means sharpness, clarity and overall vibrancy pales in comparison to Samsung’s Super AMOLED displays used on the Gear Live and Gear S watches. Colours are muted, much like they are on the LG G Watch, and images clearly look a little pixellated. 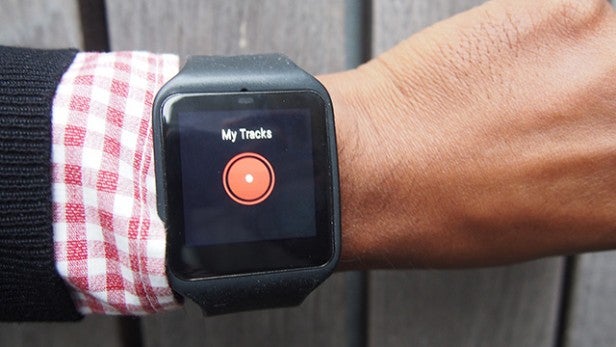 It’s a bright screen at least when cranked up to the maximum setting available, and to improve screen visibility outdoors Sony includes a transflective display. The benefit here is that the screen is still easily readable in the bright outdoors without having to rely on the potentially battery-sapping ambient light sensor. In practice it works well and, like the Outdoor mode on Samsung’s smartwatches, is a good solution to a problem for small displays.

There’s no real complaints to have with screen responsiveness, while the square watch face means there are no optimisation issues displaying Android Wear apps as the developers intended them to look. Sony includes some basic display accessibility features to improve screen visibility, such as the ability to invert colours and make text larger if you’re having to squint.