OPINION: Games Editor Sam Loveridge was excited by the prospect of an Apple games console – but disappointed by the reality of the Apple TV.

The living room gaming scene is already pretty crowded. There are millions of Xbox One and PS4 consoles already sitting comfortably under TVs across the globe, while Nintendo’s Wii U is lurking in the shadows. Valve is about to break in the backdoor with its Steam Machines, and devices such as the Amazon Fire TV and the Nvidia Shield are peeking in a window.

Let’s not even talk about the Ouya.

Apple’s been working on a new Apple TV for three years now, and there have been rumblings that the new set-top box would be able to offer a strong console gaming experience. As Apple lifted the veil on it’s next-generation Apple TV, however,I was left wondering what all the fuss was about.

Yes, it’s another Apple TV with a shiny new UI and a Siri-powered remote control with a touchpad. And that’s all great for those looking to get the smart TV experience on a budget.

But a games console? You’ve got to be kidding. And here’s why. 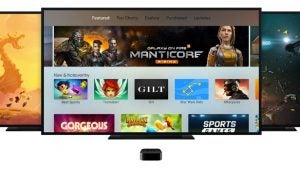 “We believe the future of television is apps,” said Apple CEO, Tim Cook, as the Apple TV was first introduced  – and that’s true. We consume so much information, content and other media through apps nowadays that it’s a struggle to get away from them.

One of the biggest selling points of the Apple TV is that it’s familiar: all your iOS apps and games – and their associated content – are right there on the big screen for you to dive right into, just as you would on iPhone and iPad.

In fact, Apple even made a huge deal about the fact all the games you’ve already bought on your iPhone or iPad will be free to download on the Apple TV. And you’ll be able to carry on playing those titles where you left off as soon as you get home.

That’s great. But it’s not new. I could already play all of my games on the big screen via the old Apple TV’s AirPlay feature.

I guess it’s great for anyone who doesn’t own an iPad or iPhone, but if they’re an Android user then they’ve probably bought a Chromecast or Amazon Fire TV Stick and are playing Android games on their TV already. 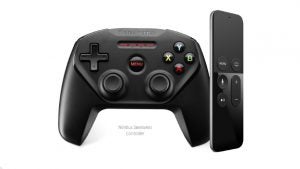 You might argue that the Apple TV’s new controller might revolutionise the way we play iOS games on the big screen, but I’m not convinced.

The new Apple TV’s controller doubles as what Apple is calling a “dynamic games controller”. It has a touch surface at the top that becomes a virtual D-pad when you turn the controller on its side. But what happens to your right thumb? There’s no face buttons, no familiar icons, and you can forget about an analogue stick or shoulder buttons.

If Apple was serious about making the Apple TV appeal to gamers, it would have also announced a proper gamepad.

I’ve had an Amazon Fire TV since launch, and although I might dabble in a little Flappy Bird with the remote, if I want to settle down for a gaming session I’ll whip out my Amazon Fire Game Controller. With that gamepad, the Amazon Fire TV suddenly becomes a dedicated games console that I can happily sit in front of for hours.

Heck, Amazon Game Studios has even made some awesome Android games of its own lately.

Apple hasn’t forgotten about a gamepad altogether, though. On its newly revamped Apple TV website, it claims that the Apple TV is compatible with third-party Made for iPhone controllers, such as the SteelSeries Nimbus (pictured above). But, I want to see an official Apple TV pad that utilises the set-top box’s features, while still appealing to Apple’s strong iOS gaming community.

SEE ALSO: iPad Pro – 6 features that will make you want one 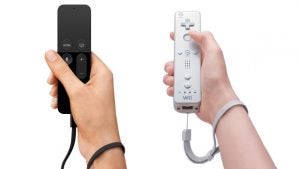 Is it a Wii wannabe?

What’s even more worrying about Apple’s lack of an official gamepad is that it’s selling a Remote Loop for its new remote control. Yes, you’ve guessed it – that’s a little plastic bit of kit that plugs into the Lightning port at the bottom of your remote and looks very familiar to something you’ve seen before.

Oh yes. It looks exactly like a revamped Wiimote – a controller launched with the Nintendo Wii back in 2006. Nearly 10 years ago.

The Apple TV remote even has similar internal tech as the Wiimote, with an accelerometer and gyroscope built in.

That probably means Apple is going to focus the Apple TV gaming section on simple, family-friendly games that take advantage of the remote’s Wiimote aping. And they certainly won’t appeal to more serious gamers. Just look at the state of Nintendo’s latest console, the Wii U.

It’s clear Apple’s intentions aren’t to be the living room games console of your dreams, or anything that attempts to bridge the gap between core console or PC gamers and the army of mobile gamers out there. 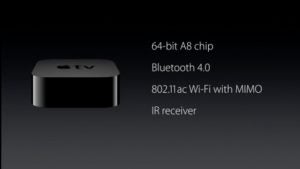 The hardware is already out of date

That ideology is also echoed by the actual hardware of the new Apple TV. The company’s latest set-top box might run a new dedicated operating system called tvOS, but it’s powered by the Apple A8 chip. That’s the same processor found in the iPhone 6 and iPhone 6 Plus launched in September last year.

Bare in mind that the new Apple TV was launched alongside the iPhone 6S and iPhone 6S Plus, which both come with the new Apple A9 processor that offers enhanced graphical grunt and performance.

There’s also that gigantic 12.9in iPad Pro, which runs on the even more enhanced A9X processor to power all those pixels.

Why, then, does the Apple TV use last year’s tech when it’s powering content to run on what’s usually the biggest screen in your home. It’s just another indication that gaming isn’t the biggest focus for Apple with it’s new TV box. 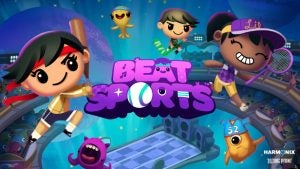 Where are the Apple TV exclusive games?

It’s not like the games highlighted during the launch event were exactly selling the Apple TV as the ultimate iOS gaming device either.

After all, the first to be given the Apple TV treatment was Crossy Road: a Frogger remake that’s taken the iOS and Android gaming scene by storm – but hardly a game that you need to play on the big screen.

Crossy Road developer Hipster Whale did have some exciting news for future Apple TV owners, though. The game is going to support multi-player on the set-top box for the first time. And you’ll be able to do that with your friends playing on iPhone, iPad or iPod Touch too.

So not quite an Apple TV exclusive feature after all then.

I don’t think the title has much to do with Apple’s recent acquisition of the headphone brand.

It’s a game where you swing the Apple TV remote to hit beats in time with the music. So far, so Wii.

It isn’t yet clear how either of these games will work with Apple TV, but neither are likely to appeal to serious gamers.

Apple also mentioned that Rayman Adventures, Transistor and Shadowmatic are coming to Apple TV. All are also already available on iOS, or are soon to launch for iPhone and iPad. Again, nothing new for Apple TV. 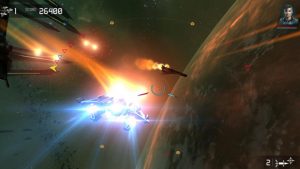 There’s one game that piques my interest, though: Manticore Rising. It wasn’t mentioned at all during Apple’s presentation, but it’s been added to the featured games on the Apple TV website.

It’s the latest addition to the Galaxy on Fire series, which are 3D space combat and trading simulation titles that might just stir up some gaming buzz around the Apple TV.

Does it really matter?

If Apple really wanted to take a stab at creating a games console, then it hasn’t really pulled it off with the Apple TV. But does it really matter?

Mobile gamers can be a fickle bunch. Most of them are slightly older and wouldn’t even class themselves as gamers. And the majority of them wouldn’t ever consider buying a dedicated games console.

Perhaps Apple doesn’t need to change things up to appeal to its existing iOS gamer audience. There are plenty of them after all. And I doubt that they’d turn down the offer of experiencing Clash or Clans, Angry Birds or even Candy Crush on the big screen.

I just won’t be abandoning my PS4 or Xbox One any time soon. And although serious gamers might occasionally reach for the Apple TV remote for a spot of iOS gaming, it’s not going to shake the living room games market up one bit.