The Xbox One has overtaken the PS4 on Amazon UK’s video games bestselling chart after doing a quick 180 on its DRM and internet requirements.

The PS4 has lost out to Microsoft’s next-gen console on Amazon’s bestselling video games chart, which tracks the amount of pre-orders for each console.

Prior to E3, the Xbox One pre-orders on the online retail giant’s website surpassed the PS4, but after Sony unveiled the design and UK price for the console it quickly overtook the Xbox One.

However, yesterday Microsoft confirmed it was backtracking on its DRM and internet requirements and would be allowing gamers to trade, lend and sell their games whenever they so choose. Daily online check-ins would also not be required for the Xbox One.

This caused much rejoicing in the tech communities as a sign that Microsoft had taken on board all of their public criticism of the Xbox One policies.

Due to this, consumers seem to be swinging back towards the Xbox One, especially in terms of pre-orders. Prior to Microsoft’s latest announcements there had even been stories of people cancelling their online pre-orders for the Xbox One.

Sony’s PS4 console now lies in third place on the Amazon video games best seller chart behind the Xbox One Day One Edition in second place. First place is still occupied by Naughty Dog and Sony title The Last of Us.

The £429 Xbox One price obviously isn’t putting consumers off Microsoft’s next-gen console, despite the PS4 price being £80 cheaper at £349.

Next-generation gaming titles are also creeping up in popularity in Amazon UK’s best seller chart: Watch Dogs is at number nine; Call of Duty: Ghosts is at number 12; Grand Theft Auto 5 is in 14th place; while Forza 5 and Battlefield 4 currently occupy number 16 and 17 respectively.

Next, read our Xbox One vs PS4 comparison. 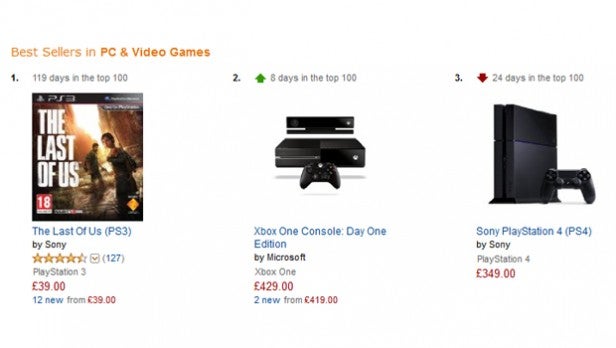