This year’s Apple Worldwide Developers Conference is now over, so here’s everything you need to know about WWDC 2018 and all the news from the WWDC keynote – starting with the iOS 12, macOS Mojave, and watchOS 5 reveals.

WWDC 2018 took place at the McEnery Convention Center in San Jose, California from June 4 through June 8.

Tim Cook and the rest of the Apple clan took to the stage from 6pm BST (10am PDT, 7pm CEST) to discuss the firm’s latest software-based innovations – and we got significant updates across the board.

WWDC 2018 Live Blog: All the news as it happened

The event is now underway, and we’re opening up with a David Attenborough-esque voice narrating over an exceptionally cringe video – yes, it’s cringe even by Apple’s exceptionally high standards.

Apple seems to be likening its developer base to animals, which someone, somewhere probably finds amusing.

The App Store turns 10 this year, we’re reliably informed – mad to think the iPhone was launched without it way back when, eh?

The Mac App Store is rumoured to be getting a significant design refresh this year, so hopefully there’s a point to all this gushing.

“Today is all about software,” Cook says, revealing that we’ll be getting updates to all of Apple’s platforms – iOS, macOS, tvOS and watchOS.

We’ll start with iOS 12 (which you can now consider confirmed) and Craig Federighi.

Craig’s getting his smug on and comparing iOS and Android adoption rates. 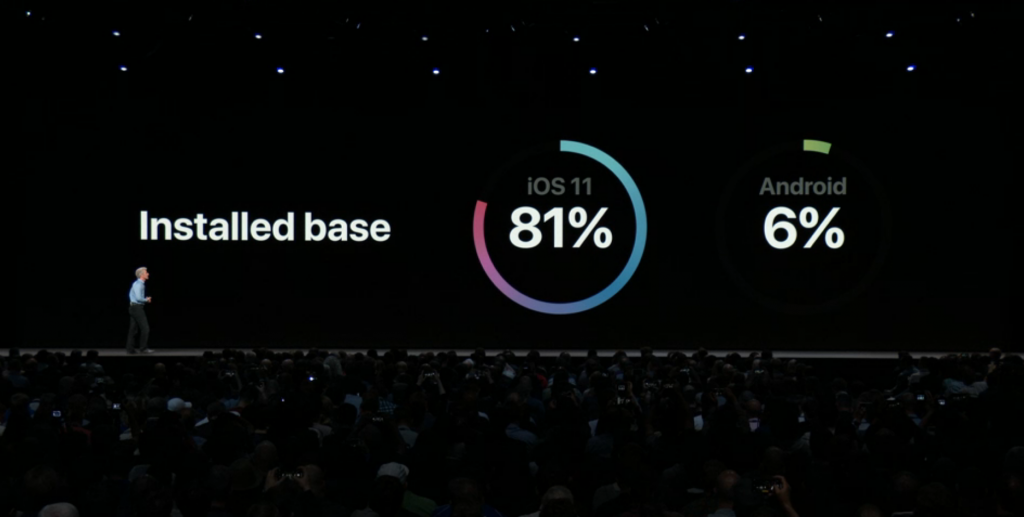 Some real news now: iOS 12 will be available for all of the same devices as iOS 11 was, so those of you with older Apple phones and tablets needn’t worry about being left behind. It’ll also be a free upgrade, in case there was any doubt.

We’re now moving on to augmented reality, so presumably this is the ARKit update we’ve heard mooted in the build-up to WWDC.

Apple has just unveiled a new file format for AR: USDZ. It

Apple worked with Pixar to make a new file format for AR: USDZ. It was developed in partnership with Pixar, and Adobe Creative Cloud will support it natively.

Fed is back on stage and talking up a new AR measurement tool. It’s imaginatively dubbed Measure. Any guess what it does? 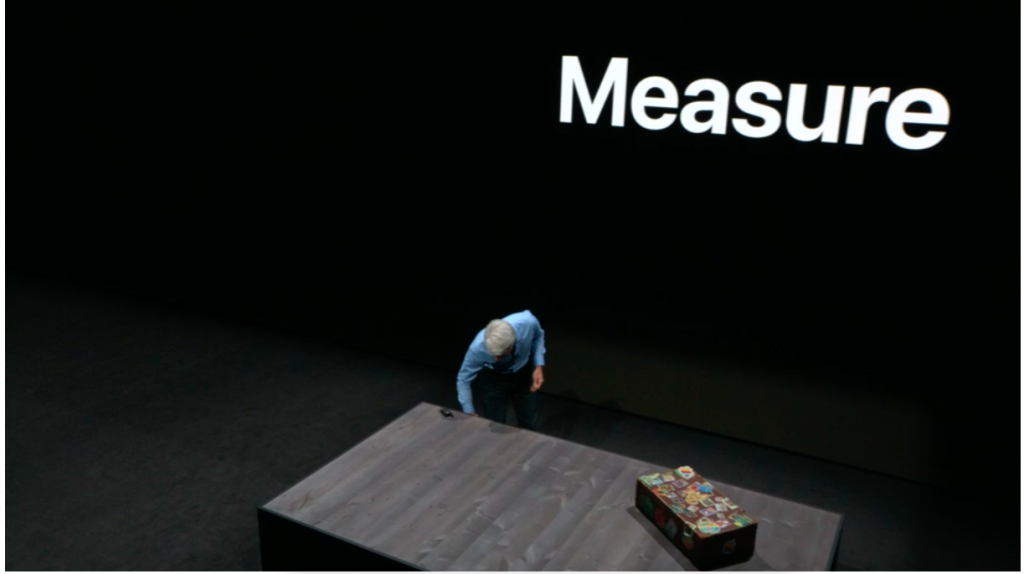 Now we’re on to ARKit proper and the update is, unsurprisingly, ARKit 2.0

The biggest updated is apparently around “shared experiences” and “multi-user augmented reality”.

LEGO director of innovation, Martin Sanders, takes the stage to showcase the possibilities of ARKit. The crux of it seems to be that AR games on Apple devices are get real, with LEGO AR experiences promised to launch on the App Store “later this year”.

Seriously, if Pokémon Go is anything to go by, your local High Street is going to be swamped with kids pointing iPads at the off-license next summer. Beats begging for a bottle of White Lightning and a packet of Rizla kings, I guess…

Photos is up next. More search suggestions and features

Siri has stepped up to the plate and will also be getting smarter, courtesy of a new feature and supporting app called Shortcuts.

Third-party apps will be able to integrate “quick actions to Siri,” Fed tells us, so if you say “Siri I lost my keys,” Tile will be activated – to give you the example used on stage. 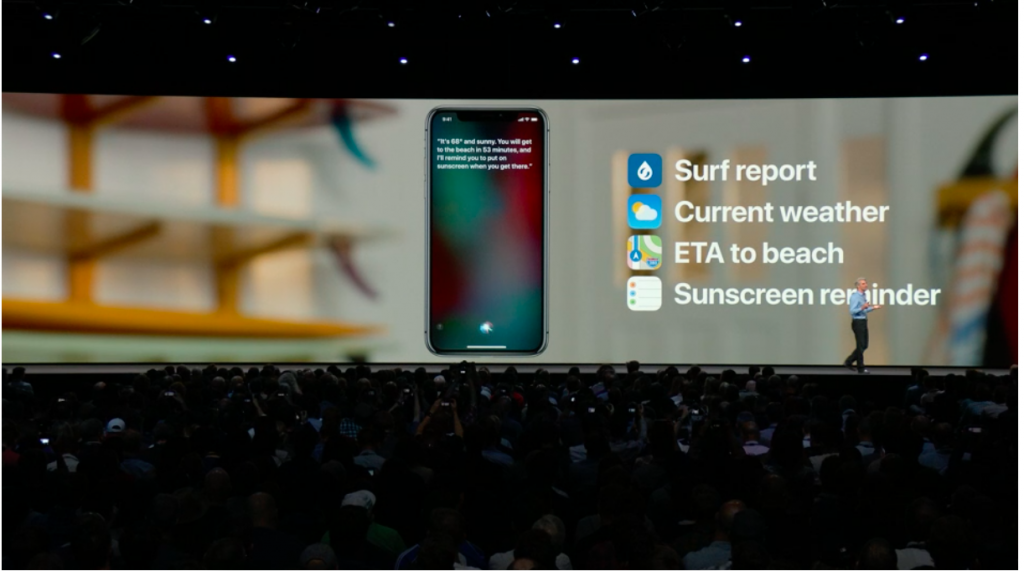 Siri Suggestions will also now be served up on your lock screen, based around repetitive tasks like ordering coffee, and iOS 12 users will be able to create their own Siri Shortcuts to help (mostly) automate common tasks like the ones mentioned above.

This kind of functionality was already available to iOS users, via a neat app called Workflow, but this will no doubt be a lot more tightly integrated and easy to use.

Now it’s time for some native app updates, or as I sometimes like to call it, “the toilet break window.”

Minor tweaks to Apple News, Stocks, Voice Memos, CarPlay, Books…wait, Stocks? Is that still a thing? Does it really exist outside of everyone’s ‘Random Crap’ folder?

Apparently so, because not only is Stocks coming to the iPad, but it’ll now integrate Apple News stories, so your FTSE updates will now more closely resemble your topless celeb alerts. How convenient.

Buried in all the waffle, though, is the actually consequential news that Google Maps will be coming to CarPlay. This is kind of a big deal, if only because it means Apple has finally admitted that its attempt at Maps sucks.

A-ha! The ‘Digital Health’ initiative we’ve heard so much about is taking centre stage at last…. 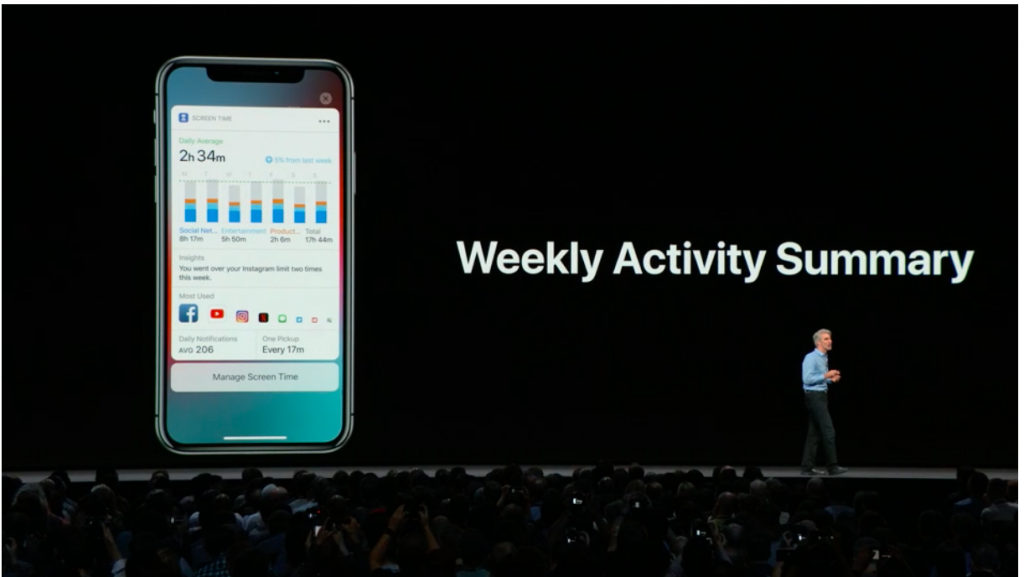 In Apple-speak, this means a “comprehensive set of built-in features to help you limit distraction,” including grouped notifications (thank god) and a new “Do Not Disturb During Bedtime” button that will silence all of the little voices in your head…or on your phone, at least.

There’ll also be new usage reports in iOS 12, and parents will be able to set limitations for their kids right in Apple’s mobile OS – no more fiddly third-party apps. A handful of startups literally just went bust.

It’s called ‘Memoji’ and is an extension of Animoji – you’ll be able to make Animoji of yourself, in short.

Group FaceTime looks cool and could be a real boon for small businesses, freelancers, creative professionals, and all the other weirdos (such as tech journalists) who use Apple products like their life depended on it.

Now it’s on to watchOS 5. “Growth has been off the charts,” we’re told.

The first major new watchOS feature is the ability to challenge your friends to 7-day competitions. The social element of the Apple Watch is constantly improving, it seems – and that’s bad news for all other fitness tracker makers. It’s the only advantage they ever had, really.

Walkie-Talkie is also finally going to see light of day. Some of you might remember that this feature was first demoed during the original Apple Watch unveiling and lets you ping little voice messages to your fellow Apple Watch-toting buddies.

Siri Shortcuts are coming to watchOS 5, too, which could also be pretty damn useful. 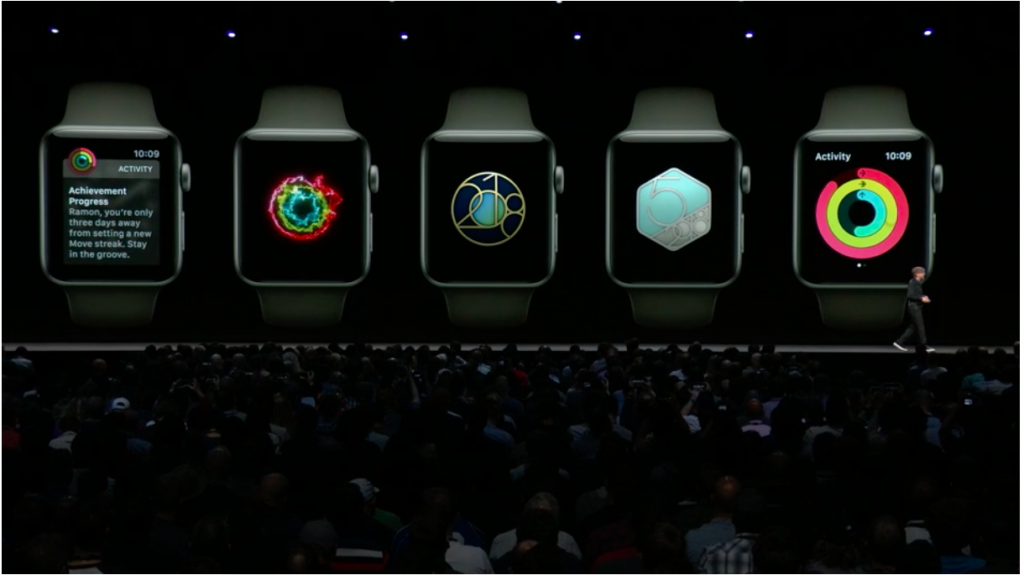 More intriguingly, Siri will now no longer require a ‘wake word’. Whereas now, you have to raise your wrist and say, ‘Hey Siri’ to summon the AI helper, now Siri will activate itself whenever you raise your wrist.

Presumably there’ll be an easy way to disable this, because plenty of people won’t want Siri listening in every time they move their hand in an upwards direction… 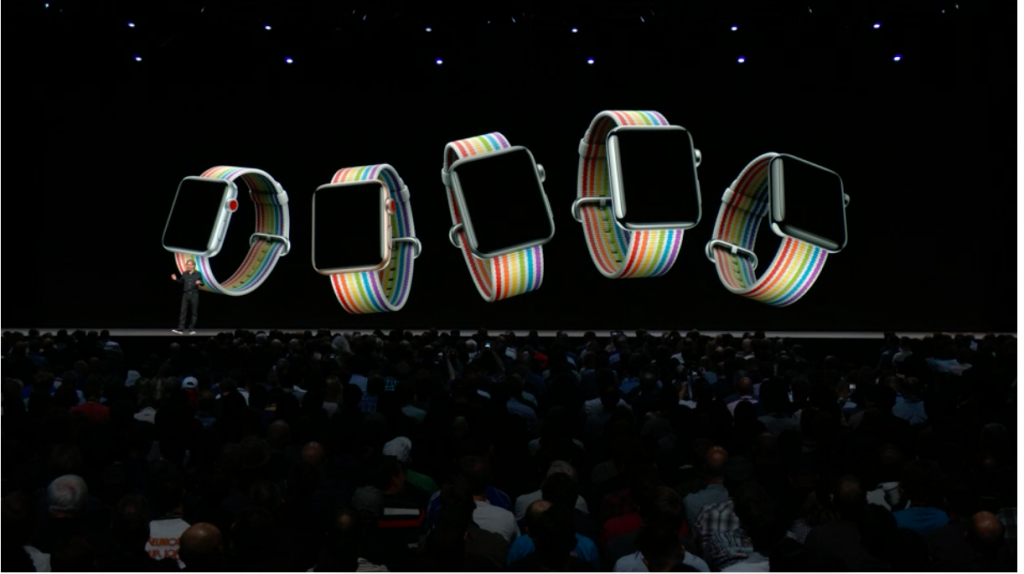 watchOS 5 will also support podcasts, and the Siri watch face will now be able to display third-party apps as well as Apple ones.

It’s tvOS o’clock now, and here’s something worth skipping dinner for – Dolby Atmos support is coming to the Apple TV!

This is big. It means the Apple TV 4K will be only streaming box to support both Dolby Atmos and Dolby Vision. That’s a pretty compelling package for AV buffs…

Another new tvOS (we’re on tVOS 12, if you’re interested…) feature will be ‘zero sign-on’. This will mean if your Apple TV detects that you’re on TV provider’s broadband network, you won’t have to login to your Apple account – it’ll auto-detect for you.  Sounds like it might be a US-focussed, at least to begin with.

Guess who’s back? Back again? Fed is back. Tell a friend.

macOS time, with approximately 20 minutes to go. And it is, as we speculated earlier (following a leak), mac OS 12.14 Mojave. 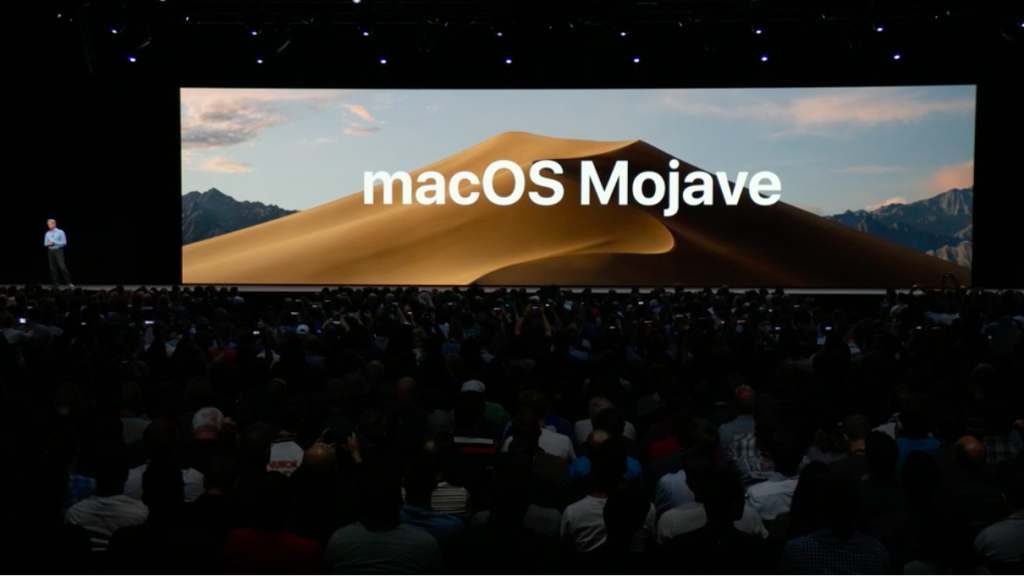 Also as leaked, the main new feature is the introduction of a system-wide Dark Mod. It looks as beautiful as the desert at night, Apple says, and you’ll want to use it whether you need to or not. MacBook-toting goths everywhere whoop in unison.

There’s a whole host of new functionality, mostly centred around productivity and creativity. I’m personally excited about the squeaky clean new Screenshot interface, which is going to make a lot of people’s lives A LOT easier.

Continuity Camera also looks neat. When set-up, it’ll mean the photos you take are ported directly to your Mac – another major time-saver.

Rounding things out are macOS apps, and as expected, Apple News is coming the Mac.

Privacy is also on the agenda, and Apple says it’s making it more difficult for data companies to track you. 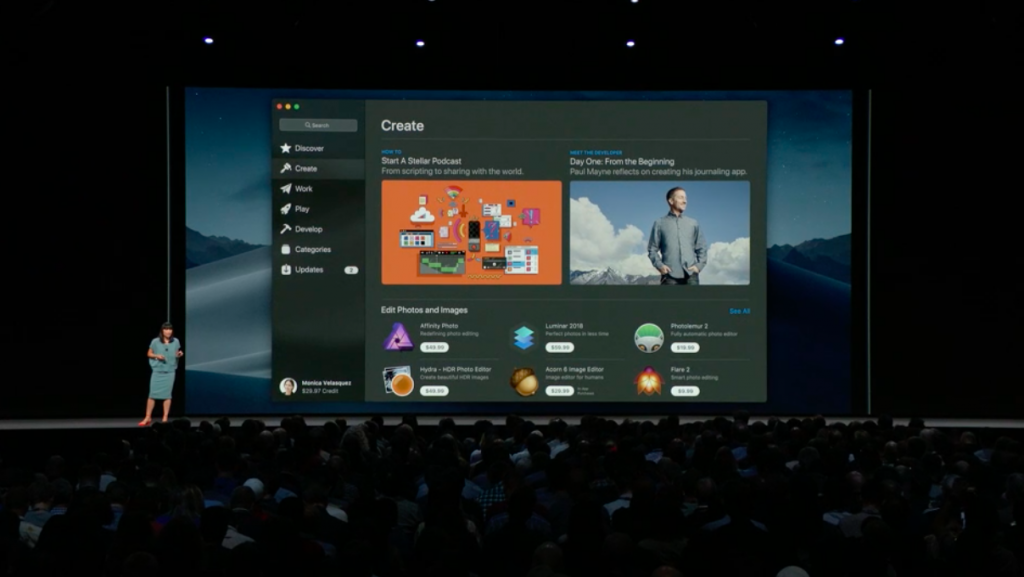 But wait, there’s more. Apple is talking about some the technologies underlying its software products, starting with Metal, which is Apple’s native graphics….thing.

That’s pretty much the ‘General Interest’ portion of tonight’s keynote done with, it seems. No iPhone SE 2, as some had predicted, but plenty worth talking about on the software front!

WWDC 2018 Live Stream: How to re-watch the Apple WWDC keynote

Miss the Apple WWDC 2018 live stream? Fear not, Apple has already uploaded its WWDC keynote to the Apple Events website for your catch-up viewing pleasure.

It’s hosted on the Apple Events website so getting up-to-speed really couldn’t be easier!