The Apple Watch is getting an overhaul with watchOS 5, which will be available for nearly all models later this year, just before the Apple Watch Series 4 goes on sale. Here’s what you need to know about the new Walkie Talkie and Competitions features, improved Notifications, Siri and much more.

During the WWDC 2018 keynote in San Jose, Apple showed off a series of neat updates for its Apple Watch range of wearable devices. The new features will arrive under the watchOS 5 banner in September 2018.

Unfortunately, the first generation Apple Watch will miss out on watchOS 5, signalling the end of support for the three year old timepiece.

Apple announced the Apple Watch Series 4 alongside the iPhone XS, iPhone XS Max and iPhone XR at its ‘Gather Round’ event on September 12 and revealed some new watchOS 5 features along the way.

Watch OS 5 compatibility: Which watches will it work on?

WatchOS 5 will be the first version of the software that won’t work on all the Apple Watches. Those of you who still have the original (often referred to as the Apple Watch Series 0) are out of luck.

WatchOS 5 is compatible with the the following devices. However, a few features (see below) will be exclusive to the Apple Watch Series 4.

WatchOS 5: Competitions in the Activity app

Apple introduced Activity Sharing in watchOS 4 and that moves on a step in watchOS 5. Competitions will allow Apple Watch owners to challenge their activity sharing friends to 7-day competitions, based upon their fitness data.

There’ll be live leaderboards where you can see where you stand, with awards for the winners at the end.

There’s also new activities to enjoy. There’s a yoga tool that uses your heart rate, while the hiking activity will track your pace, heart rate and elevation gain. 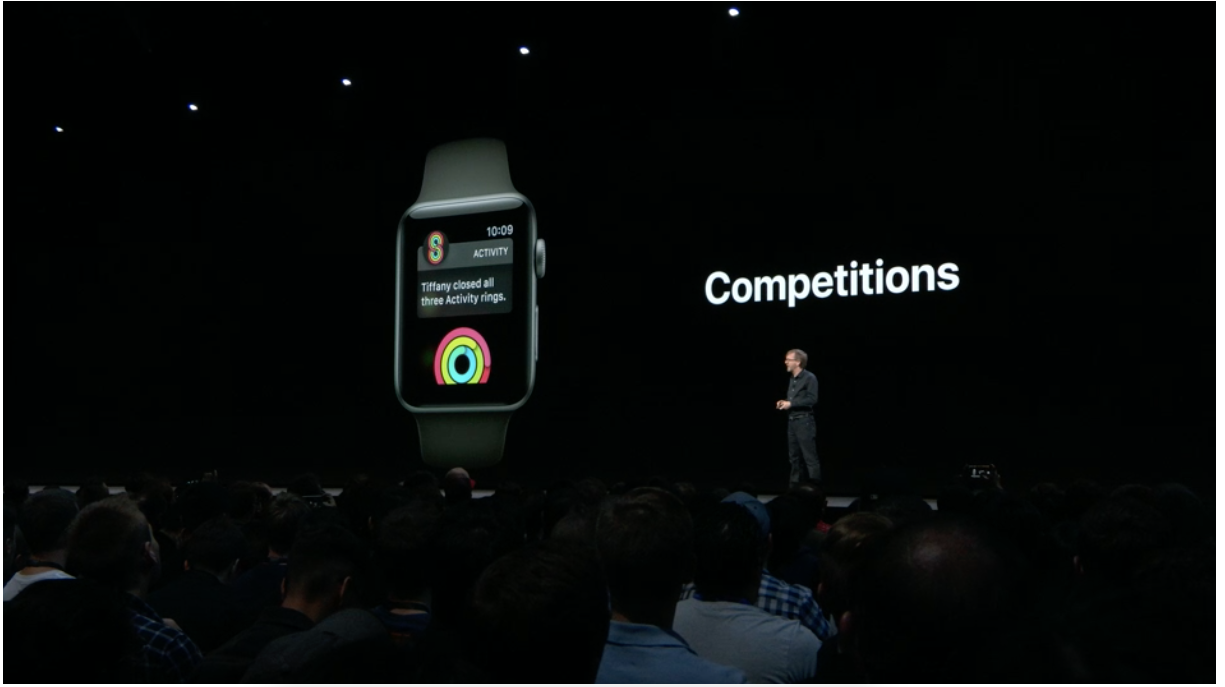 Running has been dramatically improved too. You’ll get a rolling mile pace, custom pace alerts and cadence data in the form of steps taken per minute.

There’s also automatic workout detection, alongside retroactive credit if you don’t immediately press Start to commence a workout. If the watch senses your heart rate is coming down you’ll get a reminder to halt the activity on the watch face.

Apple is also debuting a new Walkie Talkie feature for Apple Watch, enabling users to exchange voice messages with a quick tap on the watch face.

Apple Watch owners can chose friends they want to enable the feature with and there’s suggestions from regular contacts. A friend will receive a one-time connection request and after they’ve accepted, the pair will be able to contact each other at any time. Walkie Talkie works over cellular and Wi-Fi. 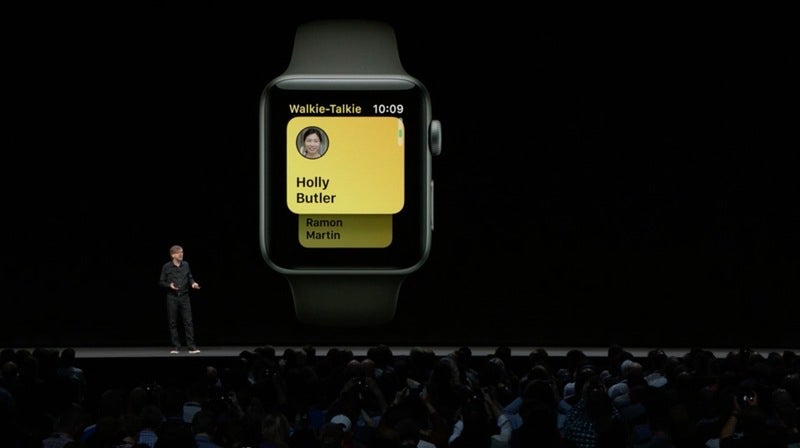 The Siri watch face, which shows contemporaneous information, is getting much better in watchOS 5.

Apple Watch users can add live sports scores, commute times in Maps and, of course, the Siri Shortcuts tools revealed as part of the iOS portion of Apple’s WWDC 2018 presentation. 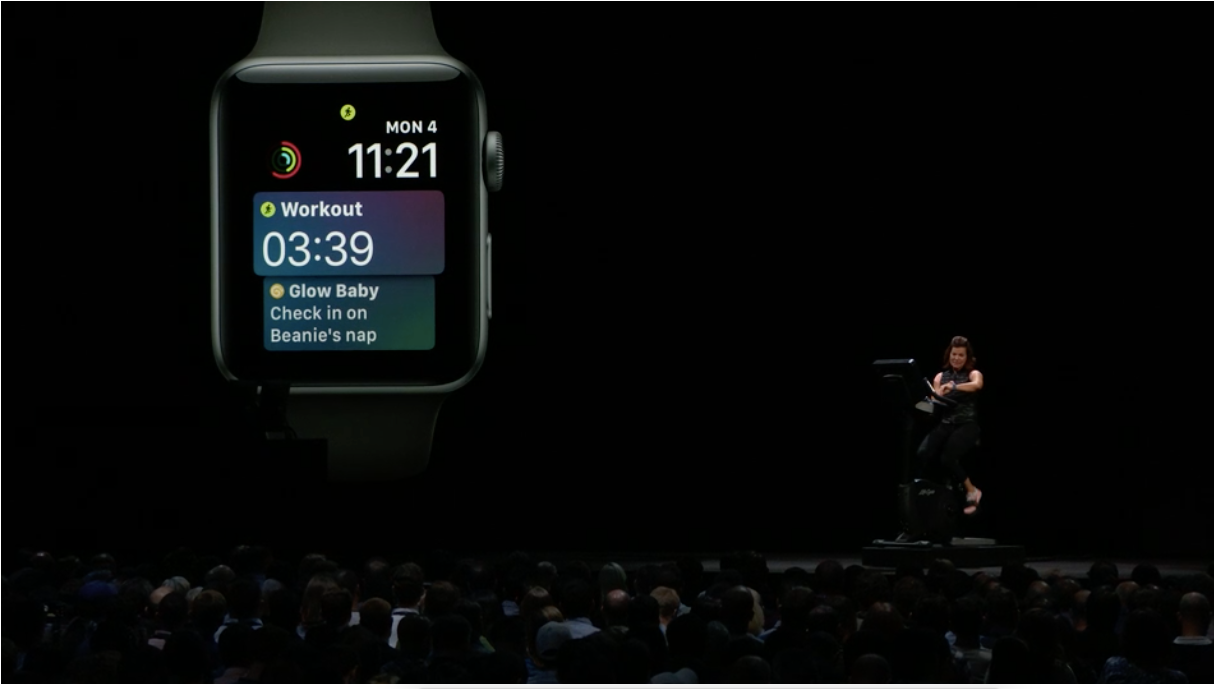 Apple is also making it easier to talk to your Apple Watch. Now you won’t have to say ‘Hey Siri’, you can just lift your wrist and begin talking.

Notifications are also becoming more interactive in iOS 12. You’ll be able to check into flights, extend your parking meter, push back table reservations if you’re running late and even pay for rides using Apple May.

Apple is also boosting notifications in Messages and Mail. WebKit is now part of the deal, meaning you’ll be able to click links sent by contacts. We aren’t getting a proper web browser, but content like restaurant menus will be formatted for the small screen and show in reader mode where available. 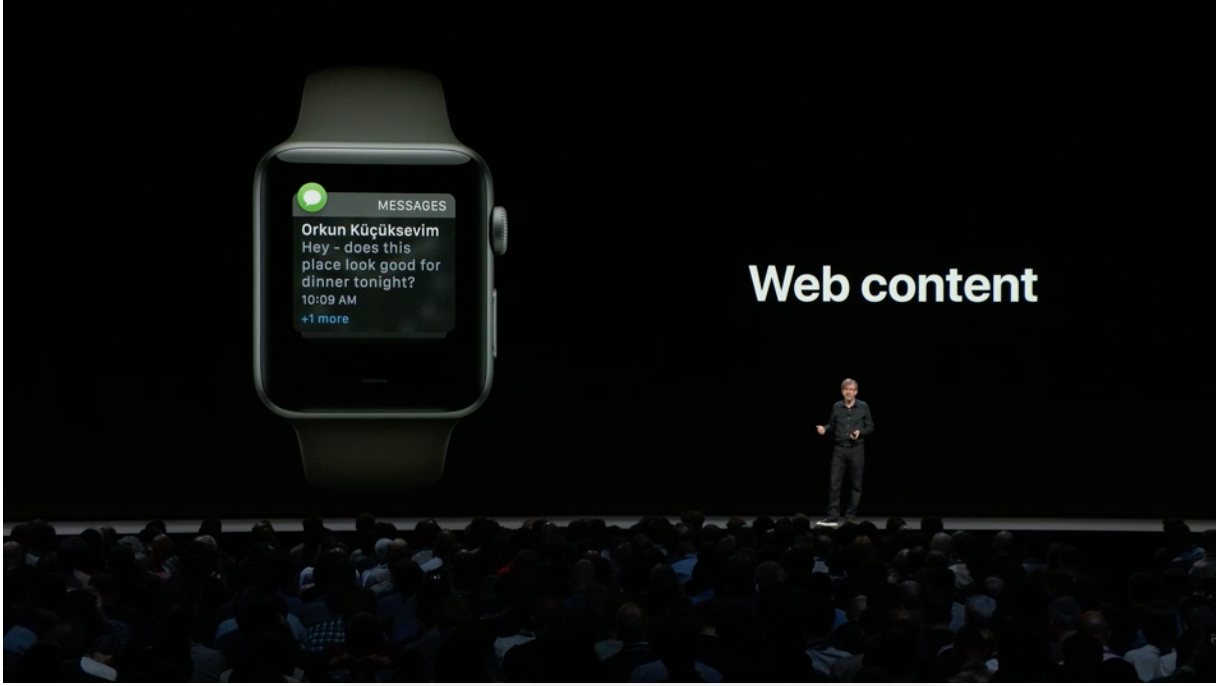 Podcasts on your wrist

watchOS 5 also brings the Apple Podcasts app to the wrist. Episodes can be automatically synced or streamed, with playback synced across your Apple devices.

As well as the addition of Podcasts, Apple is enabling third-party apps to play audio in the background, uninterrupted by your other Apple Watch endeavours.

The Gather Round event on September 12 introduced the new Apple Watch Series 4, which offers a larger display. This also includes some new watchOS 5 features that’ll seemingly (and definitely in some cases) be exclusive to the new model.

That larger screen means new watch faces with up to eight complications, which can be infinitely customised, Apple says. You can add things like weather, UVI ratings, heart rate, timezones, countdown timers, activity rings, your next meeting, music, the date and much much more. 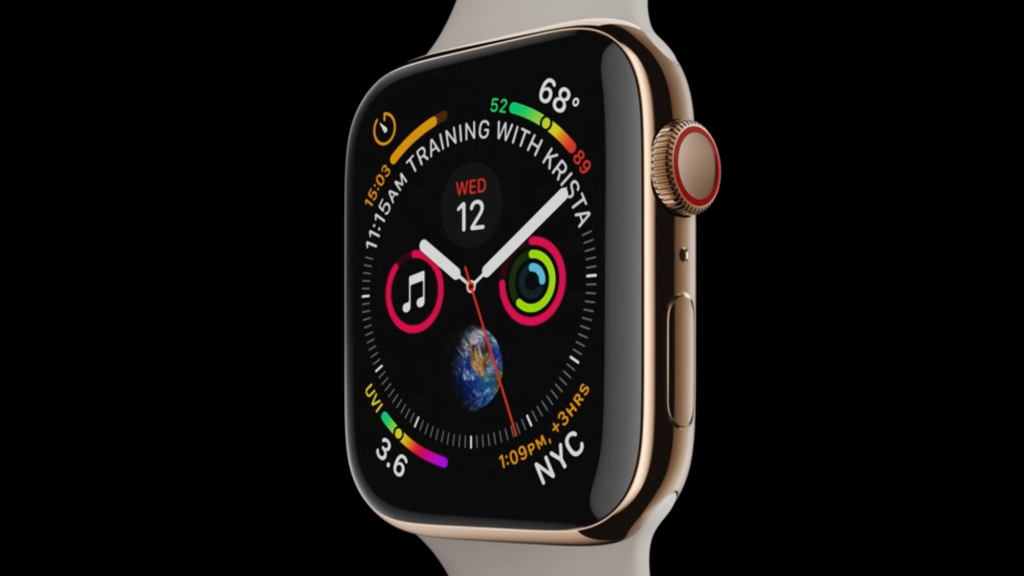 There’s also a dedicated watch face for the Breathe app, which will guide you through breathing exercises by following patterns on screen. There’s also dynamic fire, water and vapour watch faces that interact with the new edge-to-edge display on the Apple Watch Series 4.

Meanwhile, the Modular Face can now be customised with third-party complications like stocks, sports scores, boarding passes and a snapshot of your nutritional intake. It’s not clear yet whether these watch faces will be available for Apple Watch Series 3 and below.

Apple is also adding a feature to catch you when you fall. If the Apple Watch’s motion sensors notice you’ve tripped, slipped or fallen down it will initiate a shortcut to call the emergency services. If the same sensors know you haven’t moved in 5 seconds, it’ll automatically start the call. Finally, and perhaps most importantly, are the new heart health features Apple is adding in the Apple Watch Series 4. Users will get a notification if their heart rate is low or irregular, which could be a warning sign. As these features are powered by the optical heart rate sensor featured in earlier models, it’s possible they will also roll out to users on older devices.

However, the new electrocardiogram (ECG) feature is powered by new electrical sensors only present on the Apple Watch Series 4. That comes with a special app that will enable an ECG at anytime just by placing the finger on the digital crown. 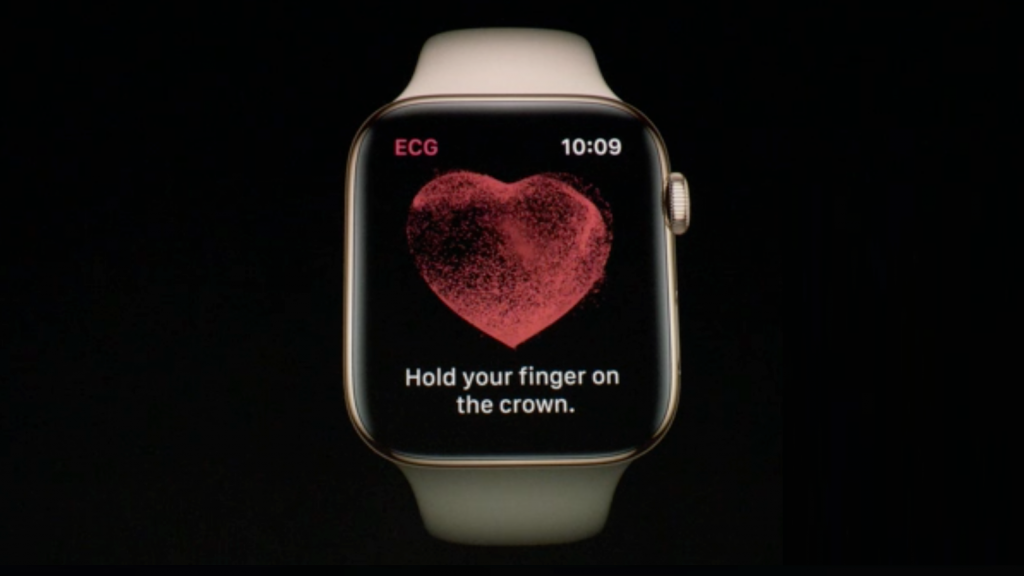 Apple Watch owners will be able to customise the button arrangements of their phone and even access their student ID cards via the Apple Watch. A number of universities will begin testing this feature later this year, which will enable students to gain entry to dorms, dining halls and events.

Users will also be able to answer FaceTime calls as audio, add cities to weather, access a new emoji picker, access air quality and wind direction/speed in the weather app, add stocks, customise the control centre and much more. 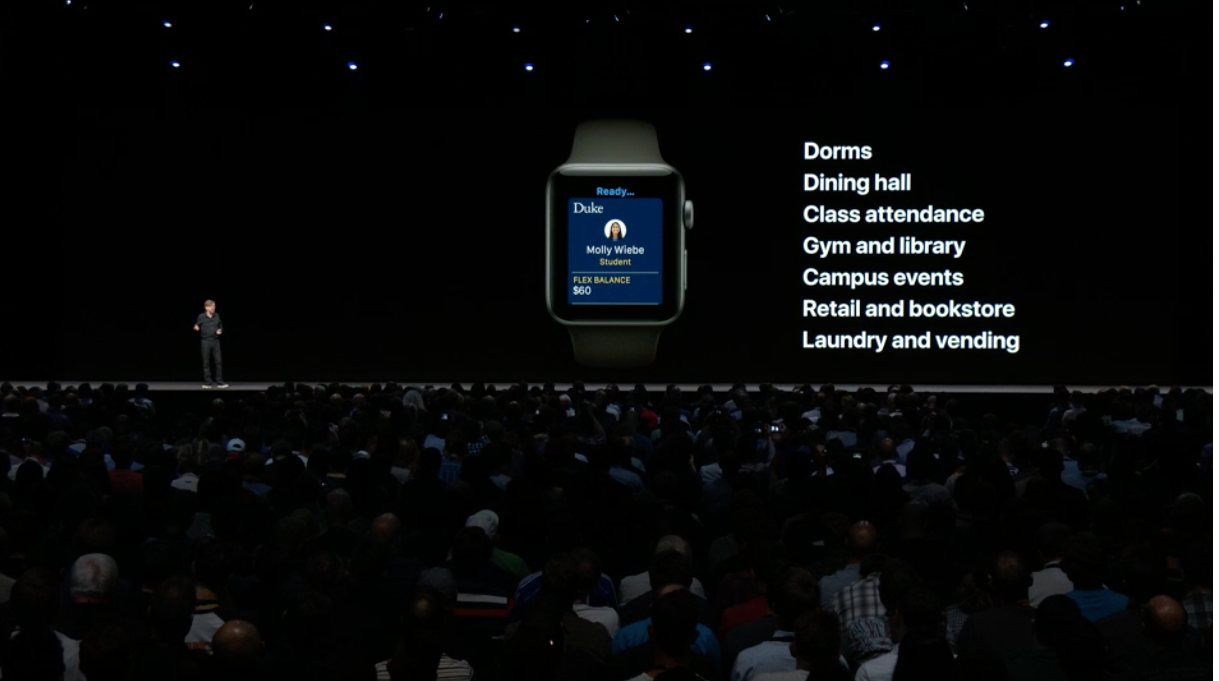 Will this update convince you to grab an Apple Watch? Is Walkie Talkie the fun feature that’ll allow you to get the most out of your Apple Watch? Let us know @TrustedReviews on Twitter.