Apple is the new kid on the block when it comes to video streaming. How much ground will the iPhone maker make with its model of original programming, while others are chasing subscribers with old-but-gold content?

The times, they are a-changin’. Though Netflix and Amazon are relatively new entrants in the content market, they’re very much old heads in the streaming department, and with Disney and Apple having entered the market, their dominance faces a challenge.

With Apple TV Plus, Apple is offering an “all-original” video subscription service that differs starkly to Disney Plus. But will it pay off?

As far as we know, all content on Apple TV Plus will be original. You won’t find a BBC broadcast, classic series or existing movie/series Apple has bought a license for – though content like that will be available in the wider Apple TV app.

It’s a bold move, especially when – in the US at least – only two of Netflix’s 10 most watched shows are originals.

Buying the rights to popular TV shows and movies has been a key battleground. The Office and Friends top Netflix’s most-watched list. Netflix, of course, was not involved in the production of either of them.

Both are heading to new homes in the US anyway. Friends is heading to HBO Max and NBC’s Peacock has snapped up The Office. In you’re in the UK, fear not; Friends isn’t leaving Netflix UK anytime soon.

Further emphasising the high stakes, Netflix launched an expensive fightback, reportedly paying over $500m for the rights to Seinfeld.

Escalating prices have pushed streaming services to consider original content not only as a cheaper option, but one that ensures the streaming service can keep hold of content – Netflix has allocated 85% of new spending to original shows.

There’s an argument that Netflix’s strategy is failing, as the company has admitted original content hasn’t driven the growth it hoped. That hasn’t put Apple off pursuing the same strategy. The flip-side of investing in quality original content is budget creep. The budgets for Apple TV and Disney Plus shows are huge – in some cases a reported $25 million per episode – but is that sustainable?

“Apple’s current level of cash spend on content is significant − however this is still behind some of the major US networks and leading SVoD (subscription video on demand) platforms,” Daniel Gadher, from market research firm Ampere Analysis, told Trusted Reviews.

“In my recent report I have estimated Apple’s P&L [profit and loss] spend on content, this is the potential spend in a given year (unlike a cash spend which includes future commitments)… When compared with other platforms Apple still has some way to go to match the spending of the major players. However, if they continue to spend at this level they may well soon see themselves rising up the leaderboard.”

Gadher noted too, the importance of Apple’s decision to opt out of the bidding war for licensed content. It remains a huge question for the platform whether this will be its unique gambit or its undoing.

He explained: “The majority of spend by the leading SVoD platforms is on acquired (licensed content) rather than originals at this point. This may change. I also looked at the upcoming commissions (originals) by major platforms… Netflix has the most upcoming shows by a long way. Apple’s commissions are not insignificant with 40 currently tracked − putting it in the top 20 worldwide.” 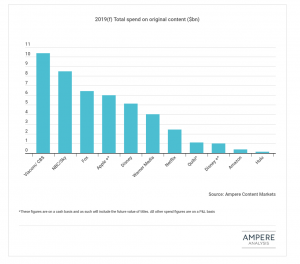 So Apple is throwing a lot of money into its original content to compete with the mixture of originals and licensed content elsewhere. It’s far from being top dog, though spending increases may see them vying for the top spot sooner rather than later.

Which leads us to another question: If familiar, licensed titles draw in the most viewers, how will Apple TV Plus attract subscribers?

In some ways Apple will be banking on familiar content. Helpsters, for instance, is a Sesame Street spinoff. Masters of the Sky is the follow up to Band of Brothers and The Pacific, and sees Tom Hanks and Steven Spielberg team up. Spielberg has brought back Amazing Stories and, in true Apple tradition, there’s a focus on star names.

The Morning Show features both Jennifer Aniston and Reese Witherspoon. Jason Momoa, of Aquaman fame, headlines sci-fi series See. And there is Oprah, though Americans overestimate her pull outside the US.

So there are big names and familiar-feeling shows. But not to the extent of Disney Plus.

Disney is arguably the film/TV industry’s most egregious recycler of content. Star Wars risks becoming oversaturated and the same could be said about the Marvel TV series heading to the service.

What are Apple’s biggest shows?

Apple’s less-is-more approach could offer more interesting perspectives and quality over quantity, instead of hitching its wagon to established franchises.

Dickinson, starring Hailee Steinfeld, tells the tale of American poet Emily Dickinson, who defied gender roles in an era in which women’s opportunities were severely limited.

See is set in a dystopian future where most humans are blind. Ronald D. Moore’s For All Mankind imagines the Russians reaching the Moon before the US.

Sound good? They are good and look great, too. The price is affordable at £4.99, the cheapest of any of the big streaming services, though it needs to be with its comparatively tiny library.

Adoption could be strong among existing Apple users. According to research firm New Constructs, it cost Netflix $581 to gain a new subscriber after Q2 2019. That’s months, if not years, of subscription fees.

Conversely, Apple has built up brand loyalty with its iPads, iPhones and MacBooks. What’s more, anyone who buys a new Apple device will get a year’s free Apple TV Plus.

Stats from earlier this month show that Apple’s smartphone business is as strong as ever, and may even be growing in terms of phone sales. This means it has enormous sway with consumers.

Gadher believes that Apple’s business stature may help it to thrive in the streaming market.

“Apple has been developing more than just a pure content play. Apple also has a video aggregator play (Apple TV app) where it is offering access to multiple services in its platform – this currently includes in the US HBO, Showtime, Hulu etc. Wider than that, it has the larger Apple ecosystem where it can use its additional services, such as the Apple TV Plus service, to drive more consumers into the Apple world driving further device and other product revenue”.

“In this instance exclusive original titles and a low price point (including free for new Apple devices) at launch may help to achieve this. That is not to say we will not see Apple’s TV strategy develop beyond this over the coming years.”

Looking to the future, the evolution of Apple Arcade may lead to interesting bundle deals and interdependent Apple products, or free trial periods, similar to those currently offered to device buyers.

The market clearly think Netflix should be worried. Its share price dropped from $381 in July 2019 to $276 in October 2019. On July 18, Netflix shares fell 11% after it announced a net loss in domestic subscribers. Netflix simultaneously announced its lowest quarterly subscriber growth in three years.

Arguably, Apple doesn’t need a soaring share price or the profitability of its TV content like Netflix. In Apple’s ideal world, everyone has Apple hardware and software linked together through the cloud. Streaming is the natural extension of this.

Also, Apple’s status as a tech giant means heavy spending on original programming may be more sustainable than it appears. The downsides? The content library is small and, though Apple is pushing for quality, consumers will be the ultimate judges.