EE’s 5G network is now live in a handful of UK cities. Here’s everything you need to know about the 5G smartphones they offer, including the Samsung Galaxy S10 5G.

EE’s 5G network has been live since May 30 and the Samsung Galaxy S10 5G and Oppo Reno 5G are now available to buy on the network.

Vodafone might have been first to announce the start date for its 5G network, but EE has been the first to put its live and ready for people to use. EE’s 5G service is now live in 6 cities across the UK: London, Belfast, Cardiff, Manchester, Edinburgh and Birmingham.

Related: How fast is the OnePlus 7 Pro 5G on EE?

You can order these devices now and there are multiple plans available hitting a range of prices. We’ve added some of the various contract prices below. All contracts include unlimited minutes and texts, and run for 24 months.

There will also be some extra perks and benefits added to the contracts, including exclusive access to BT Sport in HDR. Depending on which plan you choose you’ll get either two or three of these ‘Swappable Benefits’. 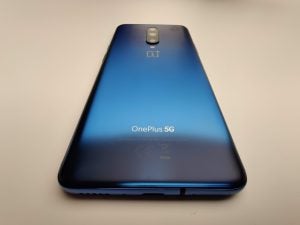 The latest flagship from OnePlus was announced a few weeks ago, with a 5G version coming with it. It packs a gorgeous 90Hz display, Snapdragon 855 chipset and a big battery. This will also be the first phone you’ll be able to buy on the EE 5G network and it’s available now.

In our OnePlus 7 Pro review we said, ‘The OnePlus 7 Pro manages to innovate in one of the most competitive technology markets out there while still circumventing convention by undercutting the majority of the competition on cost.’

We’re yet to properly take the 5G version of the phone for a spin and it’ll be interesting to see how the battery – which isn’t the longest lasting even on 4G – copes with the extra stress of 5G. 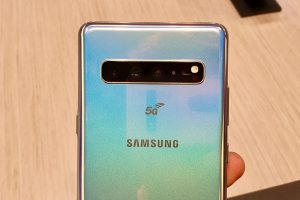 The Samsung’s Galaxy S10 5G was one of the first 5G phones to appear this year and it’s now available to buy. It isn’t simply a regular S10 with a 5G modem bolted on. Instead, this is the biggest Galaxy S phone yet with a 6.7-inch Super AMOLED display and four cameras on the back.

Big phones are a trend we’re seeing with these initial 5G phones and this could be a roadblock to early entry, especially if you prefer your phones on the smaller side.

It’s big yes, but the Galaxy S10 5G keeps the sleek metal-clad design of the other S10 devices. It also adds a ToF (time of flight) sensor on the back for extra depth in your photos, a 4500mAh battery and faster charging. 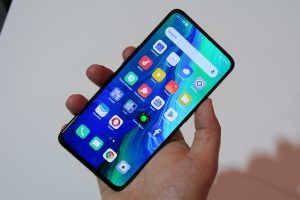 Oppo’s a fairly new player to the UK mobile scene and it has only been selling devices here for a few months. The Chinese brand’s first 5G device boasts an intriguing design, complete with a ‘shark-fin’ camera pop-up. This avoids the notch and gives you a large 6.6-inch FHD+ display.

There’s a Snapdragon 855 chipset, 4065mAh battery and tips the scales at a weighty 215g. Like all the phones on this list, this is far from a small phone. 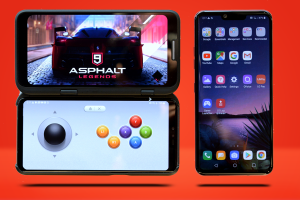 In comparison, the V50 actually has a fairly small screen for a 5G phone at 6.4-inches. The 4000mAh battery though causes a little bit of concern as this isn’t particularly any larger than what we’d expect on a 4G phone.

Arguably the coolest V50 feature is the optional secondary display. This is LG’s first attempt at creating a sort of foldable phone and it can be used as a game controller or extension of the display.

Originally it seemed like one of the initial batch of 5G phones would be the Huawei Mate 20 X 5G. However, during the launch EE said this was no longer the case, almost certainly due to the Android ban affecting new Huawei handsets.