At its core, the LG V50 is a retread of last year’s V40 that sports a spec bump and embraces 5G. It’s just a shame the additional screen seems like little more than a gimmick.

LG’s first 5G phone is here in the LG V50 (or V50 ThinQ, to give it its full name) and it comes fully loaded with a Snapdragon 855 chipset, Qualcomm’s X50 modem to enable 5G, a 4000mAh battery and five cameras.

LG is also selling a secondary a clip-on secondary display that turns the V50 into a sort of make-your-own faux foldable.

The LG V50 is both early and late. The company typically releases its G-series devices to hoover up flagship phone sales in the first half of each year and then introduces a new V-series entrant around six months later to tie the year off. With the arrival of 5G, LG broke convention.

The Korean company announced both the LG G8 and the LG V50 side by side at Mobile World Congress in February, with the G8 serving as its 4G flagship and the V50 its 5G flagship.

This may account for the numerous similarities between the V50 and its predecessor – LG had less time to innovate between generations. The company instead focused on getting 5G working in a phone and making sure the rest of the hardware could keep up – resulting in tweaks like a larger 4000mAh battery (the LG V40 featured a 3300mAh cell).

Despite being one of the first 5G phones to be announced, it’s actually hitting the market much later than competition such as the Samsung Galaxy S10 5G, Xiaomi Mi Mix 3 5G, OnePlus 7 Pro 5G and Oppo Reno 5G – most of which were unveiled after the V50.

Late or not, the LG V50 leverages the same X50 modem as most of the competition and my testing highlighted the infancy of live 5G right now, even in principle hubs like London.

Testing out of the Trusted Reviews headquarters in Canary Wharf, the V50 averaged 23Mb/s down and 20Mb/s up on EE’s 5G network but near-identical speeds when running on the carrier’s 4G network. As such, LG may be getting in ahead of mainstream 5G adoption but, as a result, the V50 suffers under EE’s nascent 5G infrastructure, diminishing one of the main reasons to pick up this phone over flagships still limited to 4G speeds.

If 5G is your main reason for wanting a new phone, the value of handsets like the V50 is currently dictated more by the speed at which carriers like EE and Vodafone upgrade and flesh out their 5G networks than the hardware in the phones themselves. 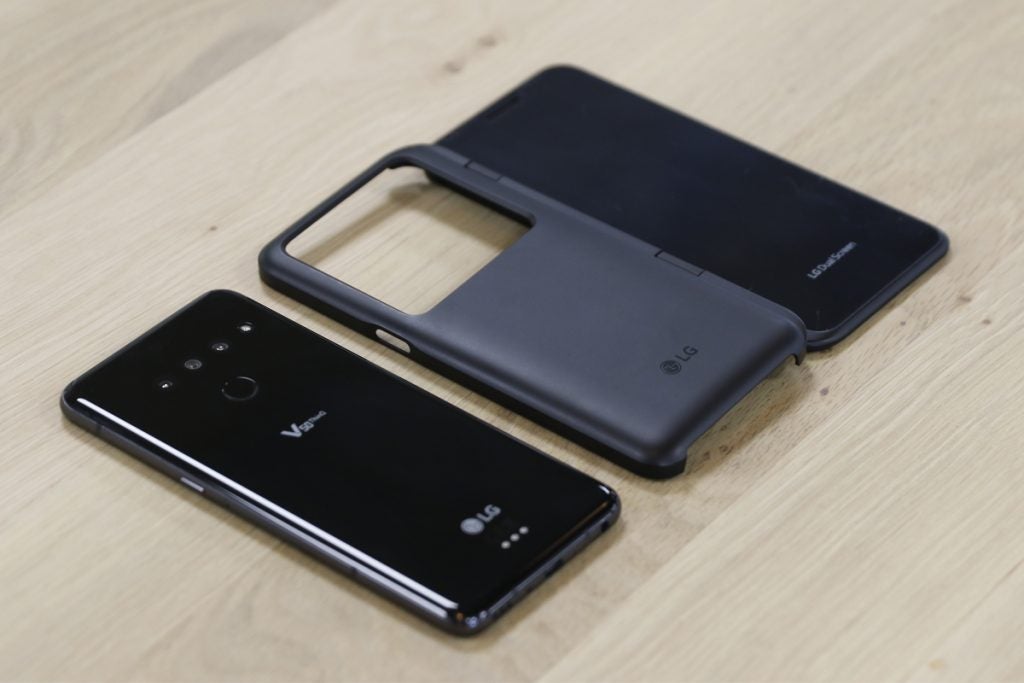 Does the LG V50’s Dual Screen accessory make it a worthwhile foldable?

One of the other big selling points that LG is pushing with the V50 is support for a new Dual Display accessory. It snaps around the V50’s body and adds a secondary 6.2-inch Full HD+ OLED panel to the left of the phone’s own 6.4-inch FullVision display. 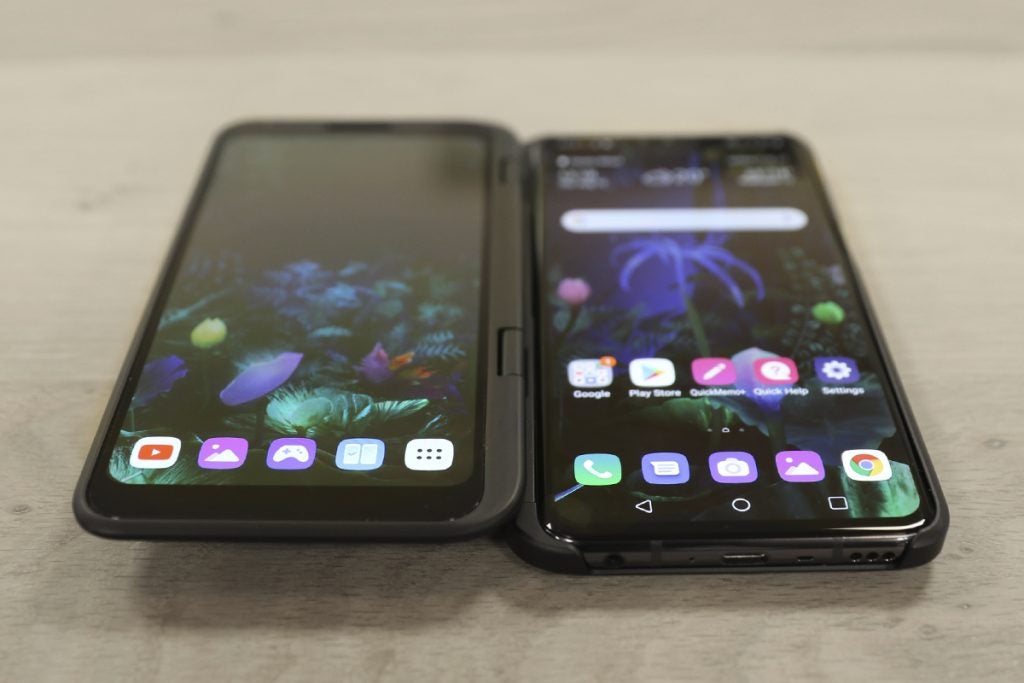 The resultant experience this second-screen offers is… odd. Don’t go in expecting Samsung Galaxy Fold or Huawei Mate X levels of foldable coherence; compared to the elegant glass and metal build of the V50 itself, the Dual Display is a mix of chunky matte black plastic, a glossy outer face that looks like a display but isn’t and the screen itself – it’s a bit of a mess, not to mention the added thickness and weight it imposes on the V50’s overall form.

It connects, elegantly enough, using three POGO pins that align with contact points on the back of the V50’s body and once you tap the power button that appears at the edge of the V50’s display, the secondary screen blinks into life. 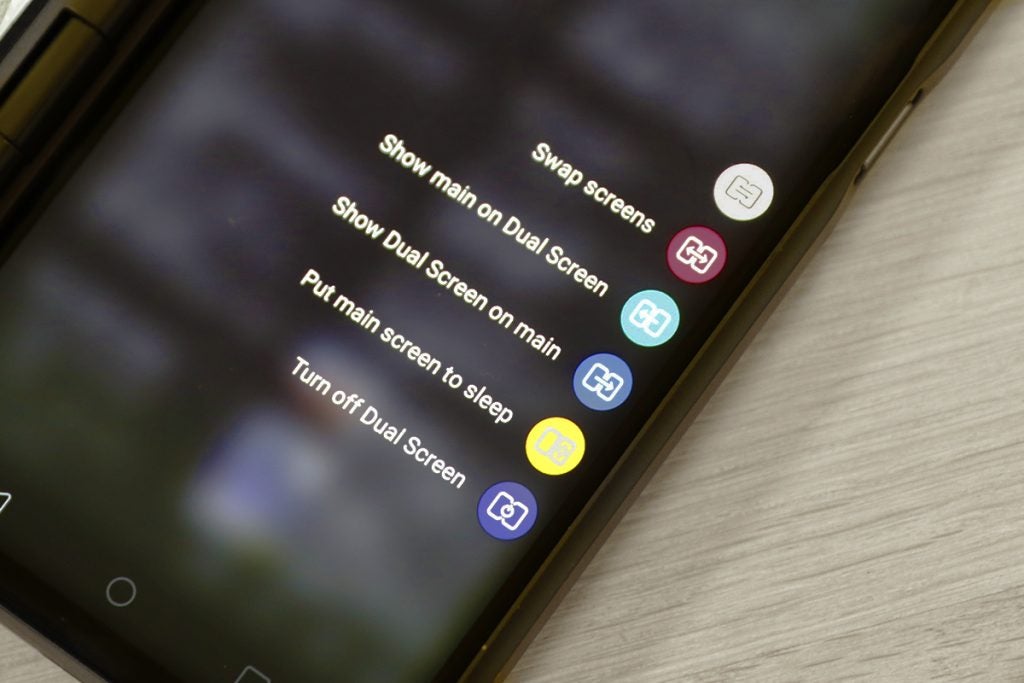 There’s an ever-present menu that lets you switch content between the two screens or move content from one to the other, which all works seamlessly and quickly. The second screen is treated almost like a secondary device, with an apps drawer all its own. You can also choose to synchronise the brightness levels of both screens or control them independently.

LG posits that it holds value as a mirror for your selfies, for hosting an additional user in video chat or by displaying a virtual gamepad when gaming, but I found any real-world benefits to be tenuous at best. 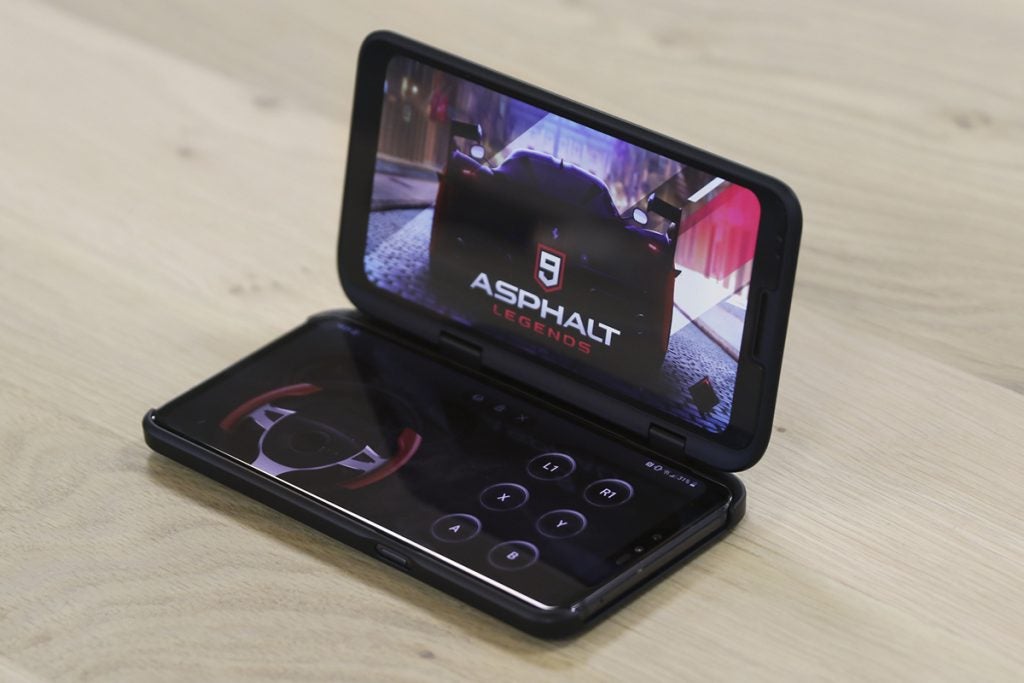 I usually wound up running a chat app like Slack alongside a portrait-friendly game like Pokémon Go or streamed a video on YouTube while browsing the web when in landscape. Some apps simply don’t play nice with the Dual Display – Netflix, for example, will instantly pause should you touch the opposing screen, making it unusable.

As for the gamepad feature, having to use touch-based controls while concentrating on another screen made experiences like Fortnite harder to control rather than easier – and most titles didn’t offer full support or were miscalibrated with no way to tweak sensitivity. The 105-degree upright position that the screen can lock to is also terrible for gaming or viewing in landscape. 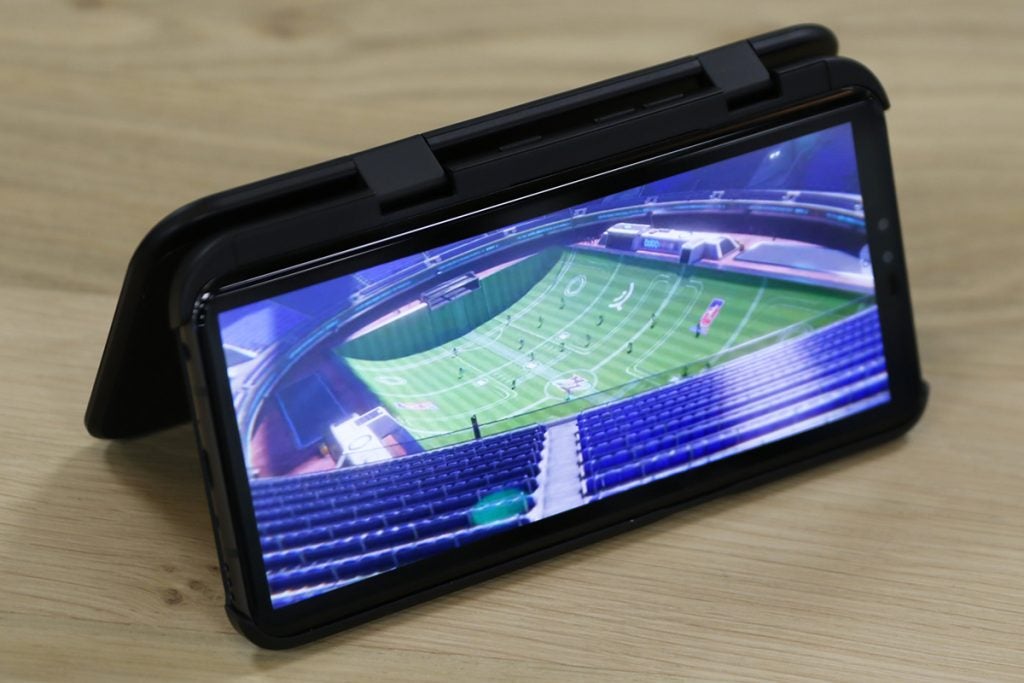 I appreciated its ability to double as a stand, but paired with the incompatibility found on certain apps and games, the unusual difference in aspect ratios and viewing angles between both screens, and the added bulk and weight, if it doesn’t come bundled with your V50, I’d leave it well alone.

The LG V50 should offer enough power for most users

The phone’s 5G functionality comes thanks in part to its use of Qualcomm’s Snapdragon 855 chipset, which works happily with that all-important X50 modem. It’s also a great piece of hardware in its own right, ensuring the user experience offered up by the V50 remains solid, speedy and stable. Pairing it with 6GB of RAM means you’re not going to get the fastest phone out there, but in benchmarking tests it’s among the highest-scoring phones through Trusted’s doors this year. 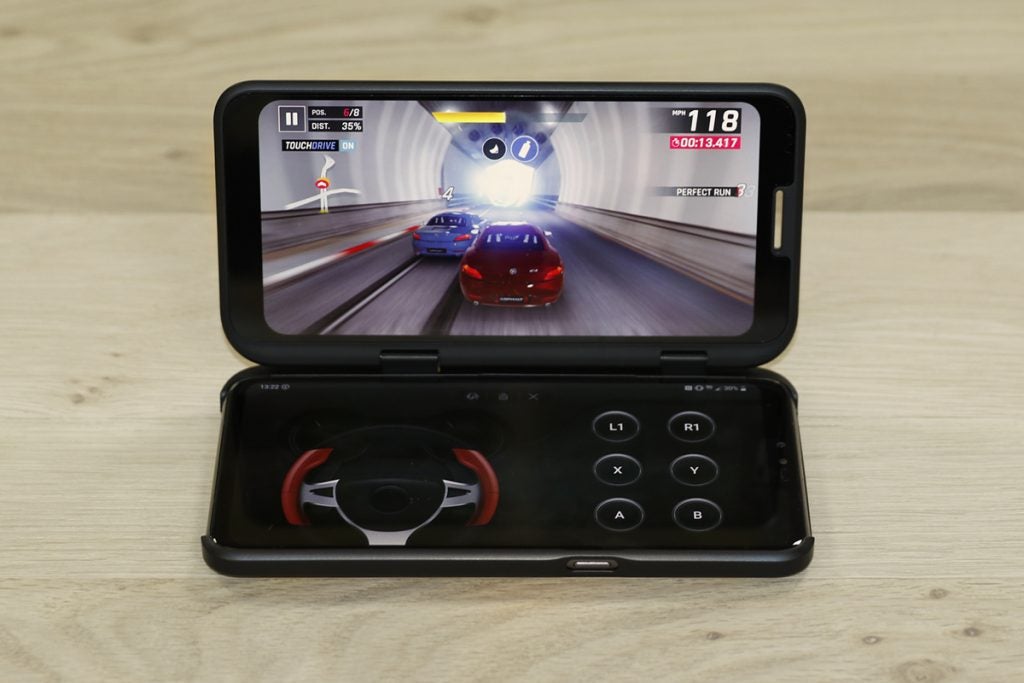 I did encounter the occasional lock-up and the phone did restart on one occasion, but I place the blame on LG’s heavy-handed software rather than on the hardware struggling under any real load. When using the dual display and running two apps side by side, the V50 also didn’t seem to be bothered by such demands, which was pleasing to see.

As for the battery, the jump to a 4000mAh cell ensures that even when using the dual display, you can expect a day’s use without worry, while using the phone as a standalone experience bumps longevity from four to almost five hours of screen-on time. 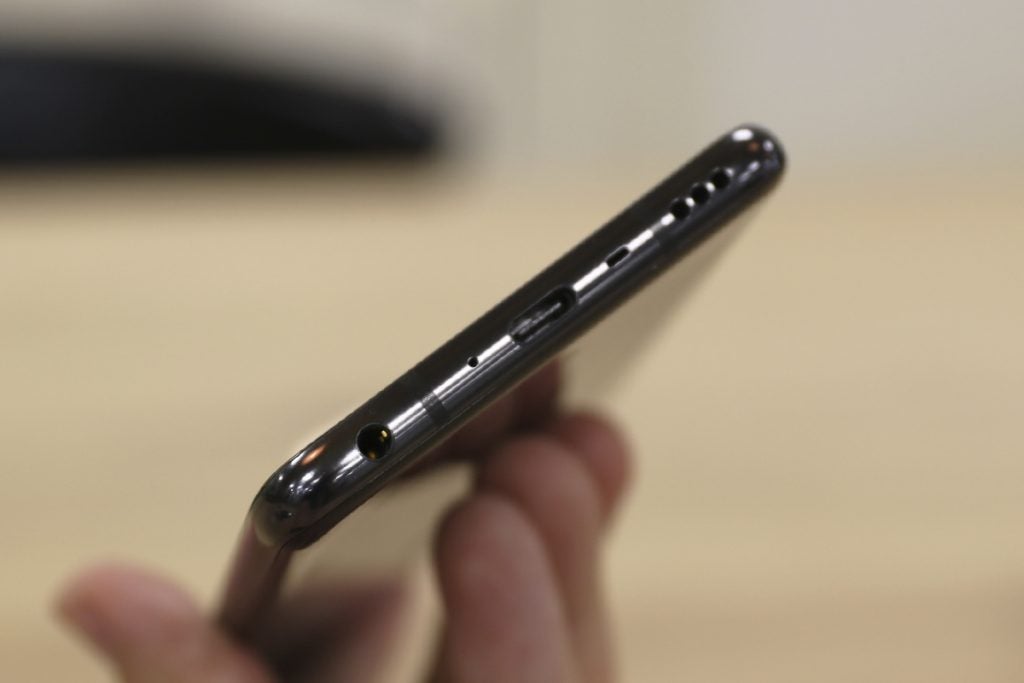 I ended most days with between 30% and 15% charge, depending on usage, and powering the phone back-up takes approximately one hour and 50 minutes using the included 18W fast charger. Integrated wireless charging also adds a layer of convenience to proceedings.

It’s also worth mentioning the V50’s audio capabilities, which excel over most of the current market (the LG G8 notwithstanding). There’s a customary quad-DAC onboard, with a traditional headphone jack, plus rich EQ controls and DTS:X 3D Surround for a strong overall audio experience.

The flat glass back of the V50 plays host to an impressive triple camera arrangement, while the front-facing dual-sensor set-up is a nice alternative to that of the Google Pixel 3. Both sides feature a main sensor and an ultra-wide sensor, alongside an additional telephoto sensor on the back. 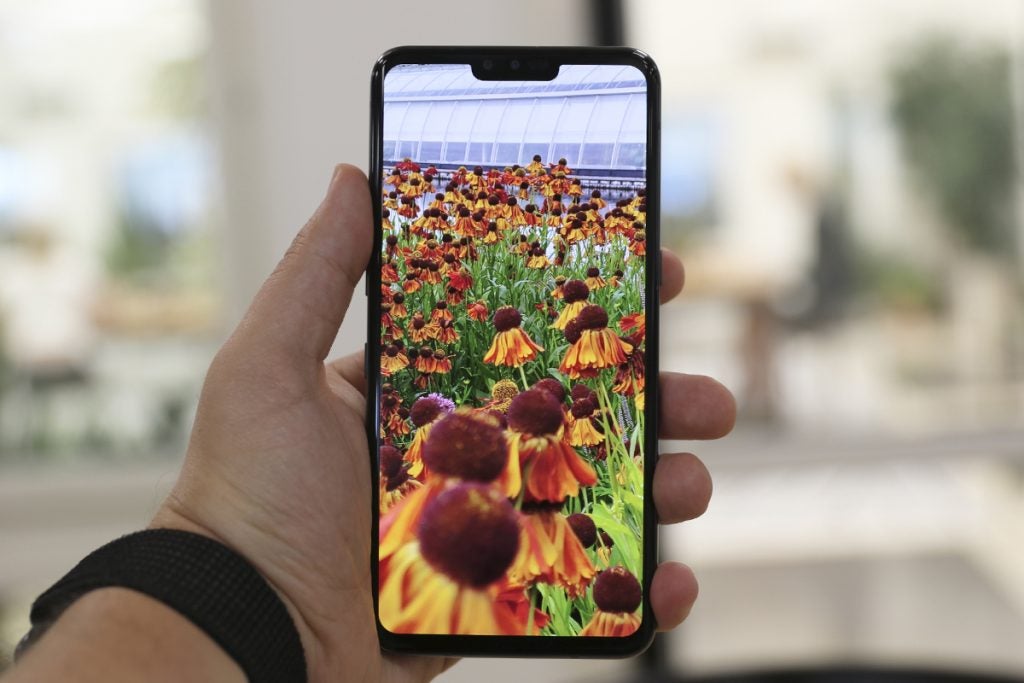 In truth, this is a seemingly identical arrangement to the V40’s five cameras, right down to resolution, aperture and pixel size. The improved AI prospects of the new chipset are what LG is leaning on, with shooting modes like Studio and AI Cam meant to intelligently add effects or enhance colour and contrast based on what the phone detects is in-frame. 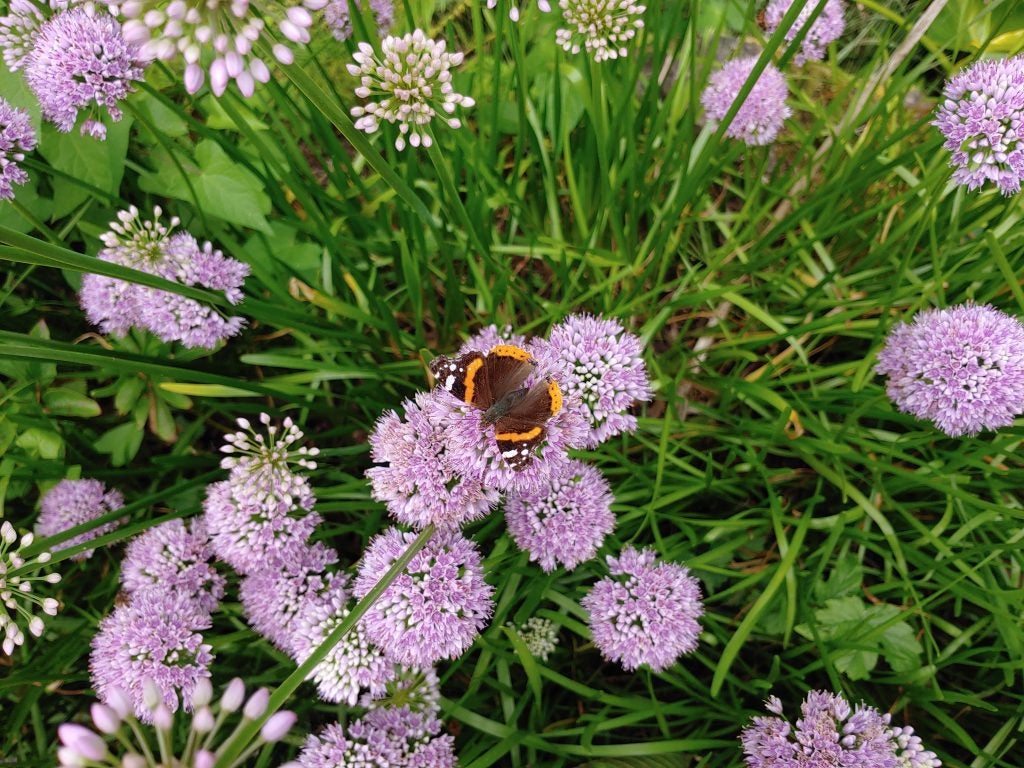 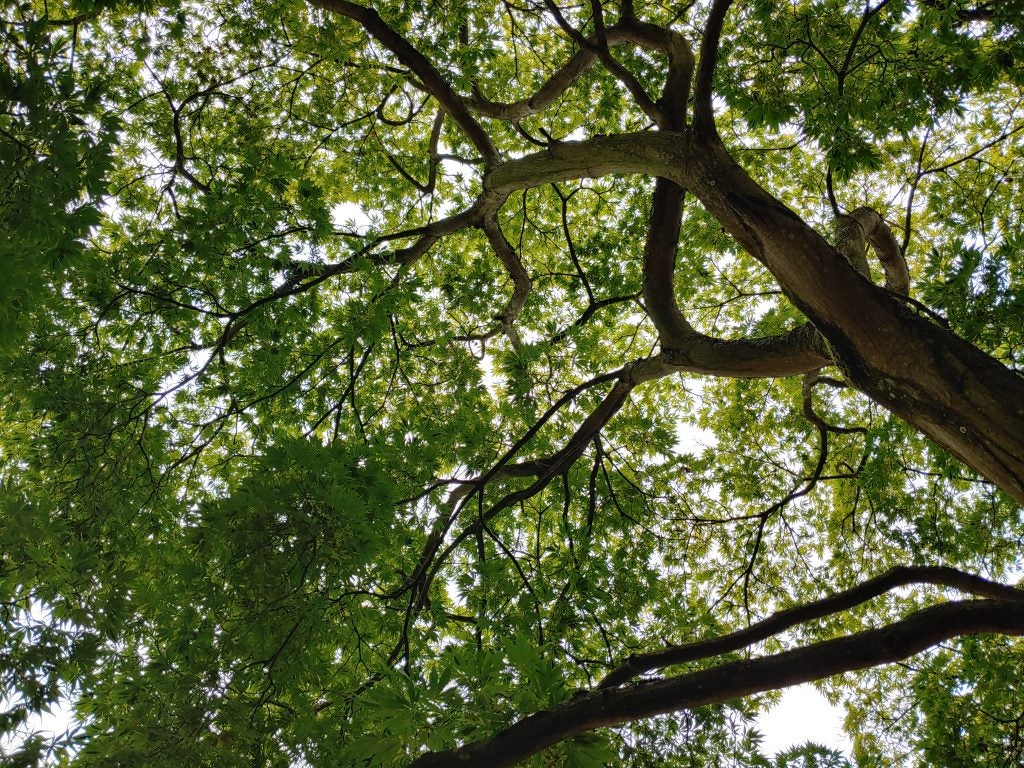 For the best results in most scenarios, it’s best to juggle between Auto and AI Cam, with the latter sometimes making better use of available light, expressing a wider dynamic range and better white balance in resultant imagery. It should serve as the sole shooting mode, however, as it does have a tendency to over-saturate images, which is where Auto steps in to capture more realistic shots. 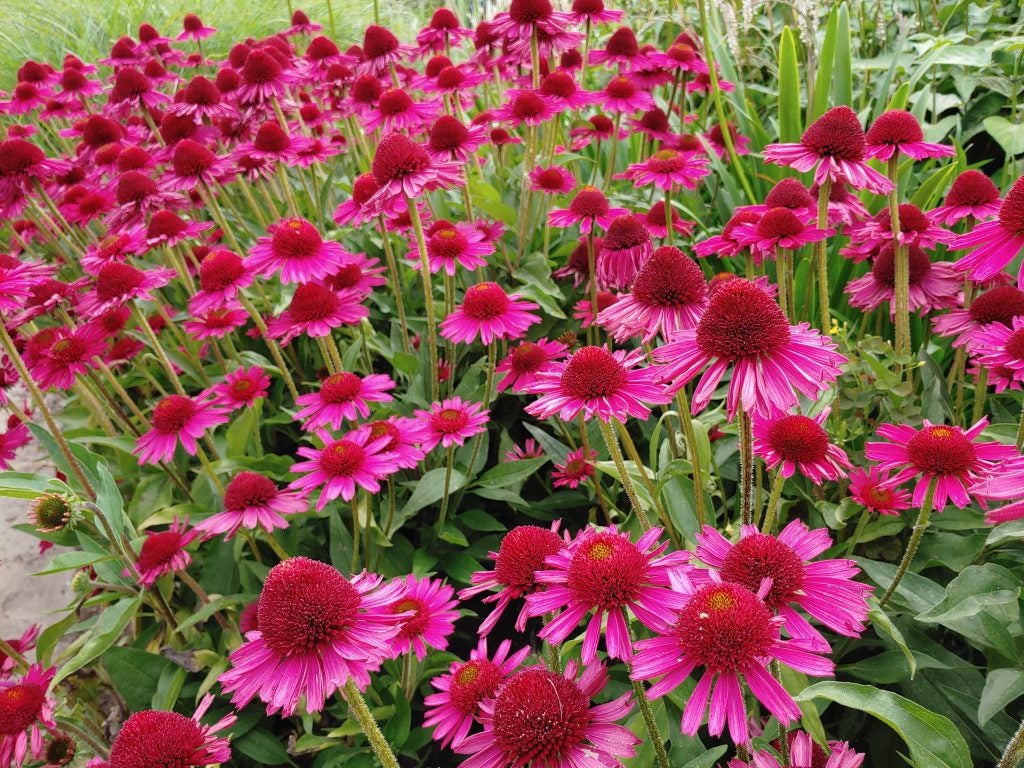 As for low-light shooting, even with the phone’s Night View mode, you’ll struggle to achieve shots that even come close to the likes of the Pixel 3 or the current low-light king, the Huawei P30 Pro. 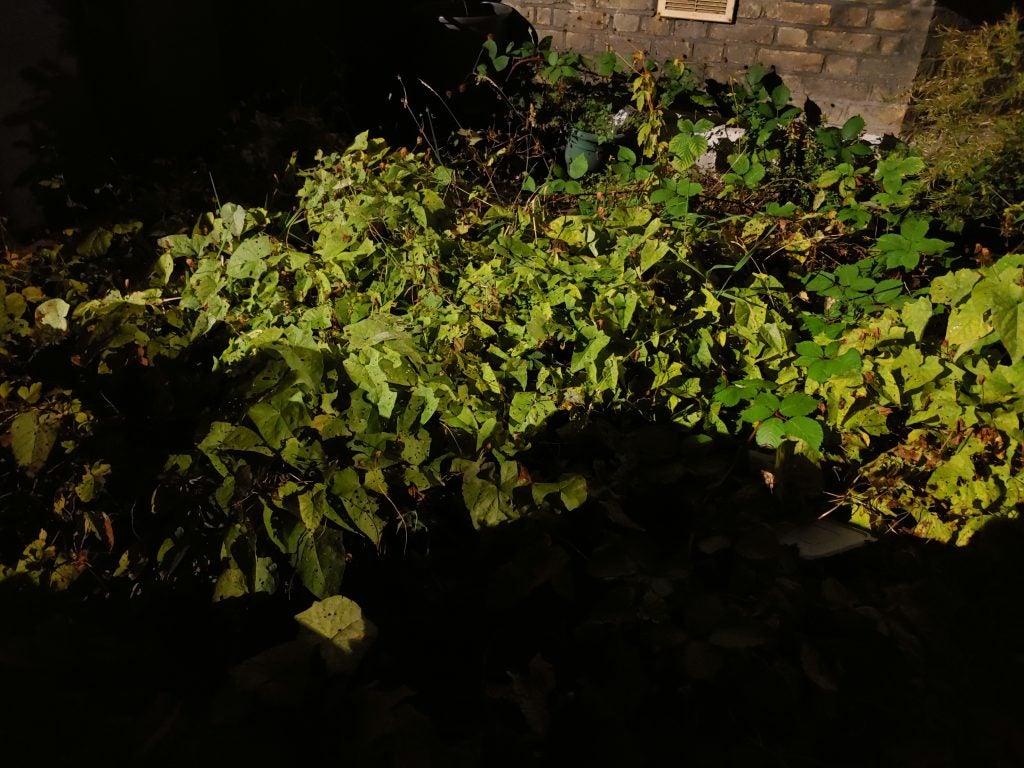 AI Cam (left), Night View (right) – use the slide bar to move between the two images

Where the V50 impresses is with its video capture; more specifically its stabilisation. The phone can shoot up to a 4K at 60fps, which isn’t something available to every current Android flagship, while stabilisation while shooting at lower resolutions and frame rates is some of the most stable I’ve seen from a phone. 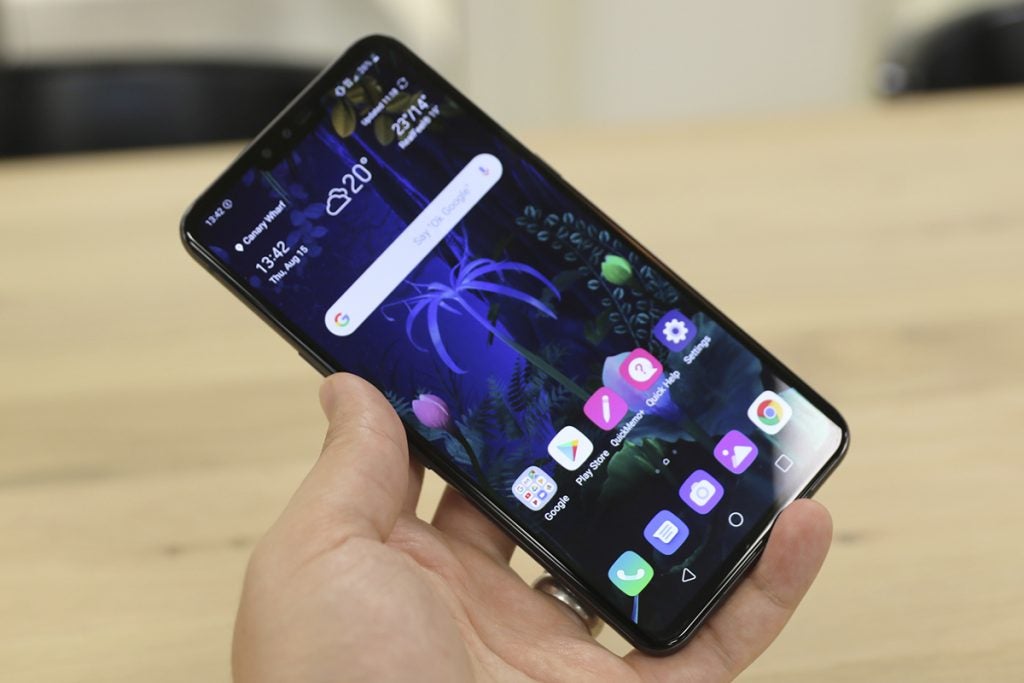 For a phone that embraces the arrival of 5G in 2019, the rest of the experience offered by the LG V50 still feels decidedly 2018.

The fact that most of the key hardware beyond its processor, modem and battery remains unchanged compared to last year’s LG V40 is challenging enough, not least when the inclusion of 5G pushes the phone’s price up so high.

If you definitely need a 5G phone, the V50 is a capable all-rounder. However, most of the other entrants out there will more readily delight and impress with superior designs, hardware talents or slicker software.

Like the G8, beyond its connectivity, its audio capabilities are to be applauded. Nonetheless, it’s tricky to recommend against stiff competition that offers more for less. 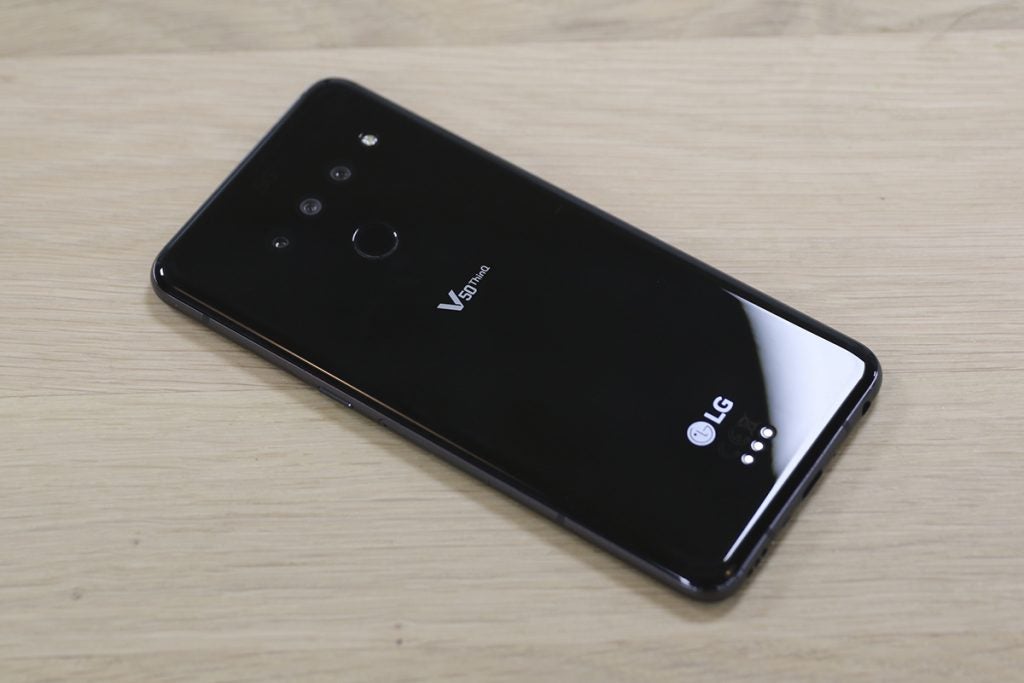 Buying direct from EE also lands you the LG Dual Screen, with 4G plans starting at £59 a month (plus a £50 upfront cost), while the carrier’s 5G plans start out with the same price of £64 per month, again accompanied by a £50 upfront handset cost.