Sony has just unveiled two new phones at MWC 2018 in Barcelona, but neither is the rumoured Xperia XZ Pro.

Instead, the company has introduced the Sony Xperia XZ2 and the Sony XZ2 Compact, both of which eschew the tired, bezel-heavy design we’ve come to expect from Sony. These are more modern-looking devices, and we have to say they offer a big improvement of what we’ve seen before.

But what really sets the two devices apart? Let’s compare them to find out.

Sony XZ2 vs XZ2 Compact performance and specs – Mostly the same, which is great

Sony’s Xperia Compact series has always been highly regarded because it offers small devices, but without sacrificing the high-end specs. Thankfully, things remain the same here.

Both phones pack the brand-new Snapdragon 845, 4GB of RAM and 64GB of storage. They’re also IP68 water-resistant and have ditched the headphone jack in place of a USB-C dongle.

The screen sizes are different – 5.7-inch vs 5-inch – but both offer 1080p resolutions, 18:9 aspect ratios and the ability to display HDR content. They can even upscale SDR content to something brighter, with more contrast and dynamic range.

You’ll also benefit from great sound on both phones, since each model creates virtual surround sound from a combination of the top and bottom speaker. Sony says the speakers are 20% louder than previous models, and in our short demo we felt they sounded a lot better, too. 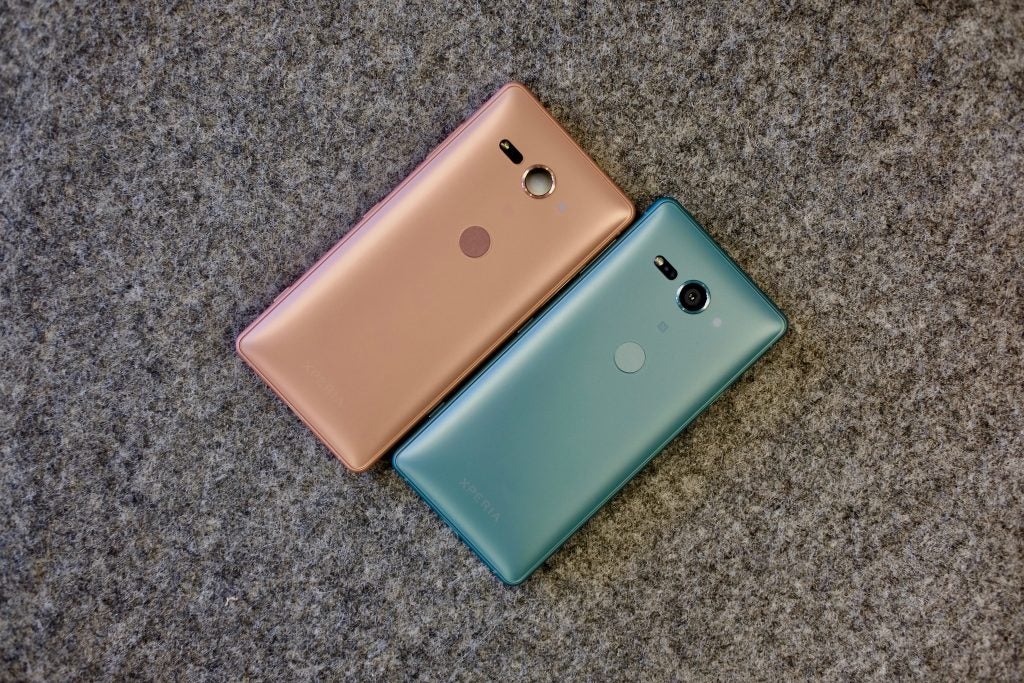 Another interesting thing to note is that both phones offer identical models of camera; Sony hasn’t retained the camera tricks for the more expensive device.

Both handsets feature the new ISP (image signal processor) for reducing noise and improving detail, offer the ability to shoot 4K HDR footage and present all the 3D facial-capturing smarts. A 19-megapixel memory stacked sensor sits on the rear of both phones, which is capable of capturing a short burst of 1080p video at 960fps.

Around the front of the XZ2 and XZ2 Compact is a 5-megapixel selfie camera, offering the ability to scan your face to create a 3D model.

There are a couple of differences to be aware of, however. The bigger XZ has a larger battery, boasting a 3180mAh unit as opposed to 2870mAh one. A more niche difference is that while the XZ2 can reach download speeds of 1.2gbps, the Compact can  manage only 800mbps. However, both support 4X4 MiMO for greater wireless range and reliability.

The most obvious feature that you’ll only find in the bigger XZ2 model is something Sony has dubbed ‘Dynamic Vibration’. This is a new system that adds something extra to movies, games and music. 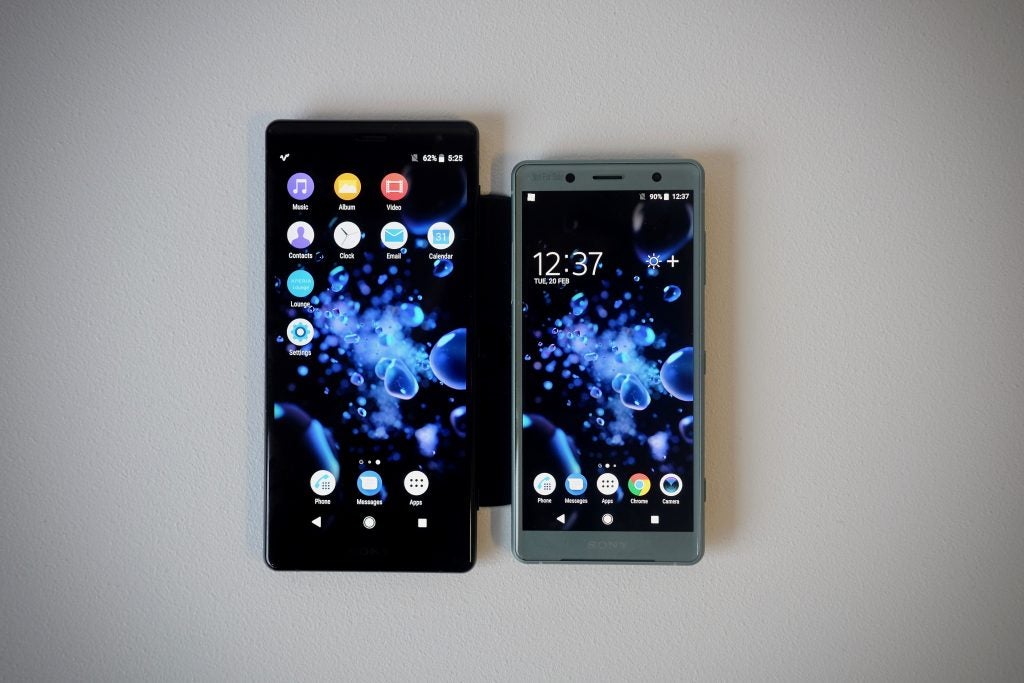 Sony likened it to a PS4’s Dualshock 4 during the demos, but something that works across multiple parts of the phone. We were shown a movie trailer where the vibrations became stronger during an explosion, and another when you hit something in a game of Angry Birds. It’s a neat feature, but one that probably won’t be the reason you choose the XZ2 over some of the competition.

Another XZ2 exclusive feature is Qi wireless charging, which is annoyingly absent from the Compact.

The biggest downside of picking the XZ2 Compact over the XZ2 is the design. Where the XZ2 uses glass, the Compact swaps it for plastic.

Both phones have a reduced bezel when compared to their predecessors, but the XZ2 certainly looks better in our eyes, offering up a sleeker body and less of a bulbous finish.

The bigger dimensions of the XZ do result in a heavier device (198g vs 168g), but this difference wasn’t noticeable in the hand. In fact, the larger size and better weight distribution actually made the XZ feel more comfortable and lighter.

Both  devices feature a fingerprint scanner on the rear, a USB-C port along the bottom edge and a shutter button on the side to quickly launch the camera. 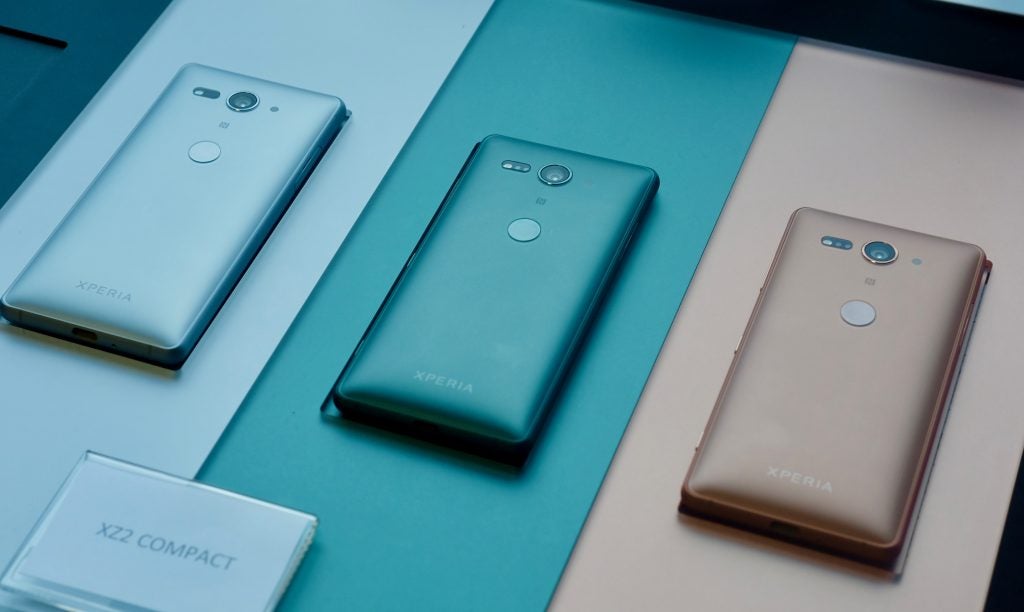 At the time of writing, Sony hasn’t announced pricing details for either device. But going on previous launches, the XZ2 Compact will be priced lower than its larger sibling. We’ll provide an update once we have confirmed pricing.

We have to applaud Sony for sticking to its guns and pushing the Xperia XZ2 Compact as a true small flagship, rather than just sticking in some lower-end components. It doesn’t quite have all the features of the XZ2, but it’s close.

The company’s decision to switch up the design is most welcome, and there are plenty of features included in both of these phones that could make it a good pick. We’d also guess that the devices will come in cheaper than Samsung Galaxy S9 and iPhone 8, although unlikely at the OnePlus 5T price.