We’ve collected all of the most important rumours, news, and leaks for Sony’s next flagship smartphone regarding everything from the price to the camera.

The Xperia 1 was an unusual smartphone for its very tall but narrow screen with a 21:9 aspect ratio, a curious feature that made it stand out from the crowd. The device also showcased Sony’s renewed focus on camera performance, which for years had lagged behind competitors — somewhat surprisingly, since Sony sensors are very common among high-performing Android smartphones in the mid-range and premium market.

The sequel is currently known under various guises including the Xperia 0, Xperia 1.1, Xperia 2, and Xperia 3 (just… don’t ask) — but more importantly, can it improve upon the encouraging progress made by its predecessor?

Over the past few years, Sony flagships have been released on a regular six-month cycle:

However, the fact that no new flagship was released in the second half of 2019 only makes us more keenly anticipate the inevitable upcoming release of this next entry in the series.

We expected to see it makes its debut at MWC 2020, which had been scheduled to run from February 24 — February 27. Despite the fact that this event has since been cancelled, we still expect the Xperia 2 to be unveiled before the end of the month, probably alongside a clutch of other new phones from the brand.

The starting price of the Sony Xperia 1 was £849 ($949), a price that put it right near the top of the smartphone market, shoulder to shoulder with the iPhone 11 and Samsung Galaxy Note 10.

Unfortunately we’d expect the Xperia 2 to arrive with a similar price tag attached, so you’d best start saving up now if you want to bag one for yourself.

The below video is sourced from @OnLeaks and Slashleaks, both of which tend to have good track records for accurate information. It depicts the Xperia 5 Plus device:

We expect the Sony Xperia 2 to share some resemblance to this model, clinging onto the unusual aspect ratio for instance, and shrinking down the bezels around the display. The screen’s form factor is likely to remain divisive, as it’s somewhat difficult to handle for everyday tasks even though there is a benefit to immersion when watching videos in widescreen mode.

The most instantly recognisable element of the Sony Xperia was its unusual 21:9 aspect ratio, which makes it particularly narrow and tall. When held in widescreen mode however, it’s intended to fit movies perfectly without irritating black bars spoiling the experience.

We expect this unique selling point to be continued into the Xperia 2, as an image has already surfaced boasting 4K OLED screen tech along with 5G connectivity, a profile that could only match Sony’s next flagship. 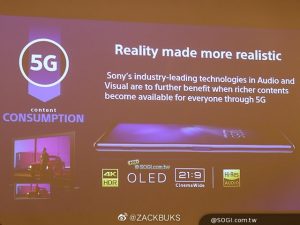 It’s yet to be confirmed, but we’d also like to see Sony hike up the display refresh rate to 90Hz or 120Hz for super silky scrolling to match other leading phones like the Samsung Galaxy S20.

For years Sony smartphones cameras had over-promised and under-delivered, disappointing us with underwhelming images despite impressive Sony-brand hardware.

The Xperia 1 was intended to be the device to break that hoodoo, so we compared it to the Google Pixel 3 in a shot-for-shot, side-by-side comparison. The Xperia 1 has a good portrait mode, with the three sensors giving a good amount of versatility. The macro is decent as smartphones go, but there are several aspects where it falls short compared to the Pixel, including level of detail, dynamic range, and especially shooting at night.

GSM Arena reports that the new handset will have a quadruple camera set-up (augmented by a Time-of-Flight sensor this time around), with the main camera sensor having a 48-megapixel resolution and two 12-megapixel sensors for the telephoto and ultrawide functions.

But another (less probably) rumour from Weibo user Zackbuks, claims that the Xperia 2 will ape the Samsung Galaxy S20 Plus camera set-up exactly – even to the point of using Samsung hardware instead of Sony’s own-brand sensors. This seems unlikely, but nonetheless we hope that Sony’s new handset will still the S20 a run for its money.

We strongly expect the Xperia 2 to house the latest Snapdragon 865 processor, which comew with the all-important X55 modem that ensures 5G connectivity. Indeed, it is expected to be Sony’s first-ever 5G handset. We expect that the processor will pack in a very strong performance, although it would be hard-pressed to equal the performance benchmarks from the iPhone 11 Pro.

As far as physical features go, it looks like the 3.5mm headphone jack is gone for good, but a side-mounted fingerprint scanner imposed on the power button could reappear.