It’s easy to forget that Samsung announced a fourth S10 model alongside the Galaxy S10, Galaxy S10 Plus and Galaxy S10e. The Samsung Galaxy S10 5G will arrive later in the year, but will be the most feature-packed smartphone in the range. So how exactly does it differ to the regular Galaxy S10?

The most immediately apparent difference between the Samsung Galaxy S10 and the Samsung Galaxy S10 5G is size, with the 5G model dwarfing its little brother in every way. It’s more than a centimetre taller and almost 7mm wider, courtesy of a much larger display. But it’s also ever so slightly thicker, and heavier by a surprising 41g.

This is a direct knock-on from the S10 5G’s next-gen network capability, which requires an additional modem. At 198g this is an absolute whale of a phone – though still, it should be noted, 10g less than the iPhone XS Max. 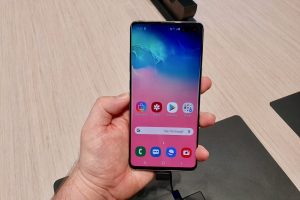 Otherwise, the S10 and the S10 5G have a nigh-on identical design, with curvy glass to front and back and a metal rim.

On the front, both phones back dual-curved displays that stretch even further out to the top and bottom. Samsung has achieved this with its ‘Infinity-O’ technique, which plants the front camera within the borders of the screen rather than within a chunky notch. The result: more screen, less bezel.

The Galaxy S10’s single circular front-facing camera arguably makes for a prettier Infinity-O solution than the Galaxy S10 5G and its longer, lozenge-shaped hole punch. But there’s so much screen to the S10 5G that it’s unlikely to prove too much of a distraction.

The headline spec of the Samsung Galaxy S10 5G is right there in its name. It’s 5G connectivity that sets it apart from the rest of the S10 family.

Samsung’s new top-end phone will be able to connect to the next-generation mobile network, enabling blistering speeds and minimal latency – if you’re in the right area of the country. The practical reality remains to be seen, with 5G coverage not set to really kick into gear (in the UK at least) until 2020. Widespread 5G coverage will come even later.

In the here and now, the S10 5G’s unique network capability has informed a number of other specifications. The most obvious is the Galaxy S10 5G’s 6.7-inch display – the biggest Samsung has ever put in the phone, and way bigger than the S10’s 6.1-inch unit. After all, if you’re going to have a broadband-like connection straight to your phone, you’ll probably be streaming a whole lot of Netflix.

The additional 5G modem necessitates a bigger battery even than the Samsung Galaxy S10 Plus. At 4500mAh, it’s a monster, and a full 1100mAh more capacious than the plain Galaxy S10.

Juicing this bad boy up would take quite a bit longer with a regular charger, which probably explains why the Galaxy S10 5G is the only S10 model to support super-fast 25w wired charging. Both phones support wireless charging, as well as the ability to charge other wirelessly chargeable devices with Wireless PowerShare. This latter feature will arguably be more useful with the S10 5G’s huge battery, though.

You also get a unique ultrasonic in-display fingerprint sensor with both phones, which promises to top the optical solution of the OnePlus 6T and Huawei Mate 20 Pro in terms of speed and security. 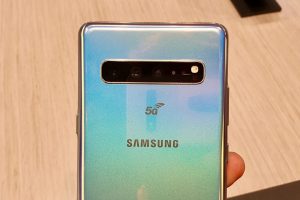 The Galaxy S10 arguably has an advantage over its (much) bigger brother when it comes to memory. While the S10 5G’s standard 256GB of internal storage is double that of the default S10 model, it’s half that of the 512GB S10. Unlike the S10, the 5G model lacks microSD storage, so you won’t be able to expand it at all. Of course, the idea here is that 5G will enable you to stream media instantly, and 256GB is hardly a scant amount for those other occasions.

There’s no supercharged ‘Performance Edition’ like with the S10 Plus, either. That means you don’t get the option of 12GB RAM and 1TB of storage, though that does seem a little like overkill.

Both phones are are likely to run on the same Exynos 9820 or Snapdragon 855 CPU, depending on territory, though the 5G model will obviously cram in an extra 5G modem. The S10 5G also adds a vapour chamber cooling system, which should dissipate heat better during high-end tasks like gaming.

Both of these phones go with a base triple-camera approach to photographic mastery. That involves a 12-megapixel main sensor with a varying aperture lens, a 16-megapixel ultra-wide, and a 12-megapixel telephoto sensor.

However, the Galaxy S10 5G also adds an hQVGA 3D depth-sensing camera (also known as Time of Flight or ToF) into the mix. This will bolster augmented reality content, which is projected to be one of the big beneficiaries of 5G, and will also add extra blur to Live Focus shots.

There’s a similar addition to the front camera. The Galaxy S10 gets a single 10-megapixel f/1.9 sensor, while the S10 5G gets the same and adds one of those hQVGA 3D depth-sensing camera. Again, it promises to provide better selfie depth and a boosted AR experience.

The Samsung Galaxy S10 5G will launch in the UK in ‘early summer’ to accompany the initial roll out of 5G. Expect it to land in the USA around the same time. We don’t know how much it’ll cost just yet, but don’t be surprised to see it bursting through the £1000/$1000 barrier.

The main reason to pick the Galaxy S10 5G over the Galaxy S10 is its 5G connectivity, and then only if you’re going to be spending a sizeable chunk of your time in one of the few areas of the country that will get the next-gen network this year. Otherwise, the bigger phone has the benefits of a much larger display and battery, a secondary selfie camera, and more AR-friendly front and rear cameras. Whether these additions are worth the extra bulk (and almost certainly money) is something you’ll have to weigh up carefully for yourself.