Rainbow Six Siege is one of the biggest multiplayer shooters in the world right now, and that means Ubisoft is always keen to provide players with new content. Operation Grim Sky is the latest in a series of major content drops for the game, bringing with it an assortment of new operators, map redesigns and modes.

Trusted Reviews has compiled everything you need to know about Rainbow Six Siege: Grim Sky including all the latest news, release date, maps, operators and more.

Rainbow Six Siege: Grim Sky will go live on test servers on Monday, August 20th with a widespread release to follow in September 2018 across PS4, Xbox One and PC.

Grim Sky brings the first full map rework to the game with a complete redesign of Hereford Base, the SAS training ground that serves as the headquarters for the counter-terrorist outfit.

The map was the first one designed for Rainbow Six Siege and it shows, with many of the ideas the game holds up writ small: destruction is limited, and the scope of the map feels tiny, with combat focusing around one key staircase, which locked off a lot of roaming potential and could often see the attacking team pinned down and short of options.

Each of the building’s four floors now have bomb sites, and while Hereford still has familiar elements: the garage, or the way a certain corridor curves. However, it’s a huge rework, with the highlights being a labyrinthine basement filled with flanking routes and doorways, and a wide-open third floor which felt unique amongst Siege’s map offerings: in the rounds we played, firefights here were dynamic and unpredictable.

Speaking at the reveal, the team behind the map rework said that most of the action used to be located in the basement, but the four new bomb sites (one on each floor) should be viable for competitive play.

Consulate is getting a map buff in Grim Sky, too. Consulate’s buff isn’t as extreme as the rework seen by Clubhouse, and instead adds an extra objective in the Bomb mode, an upstairs/downstairs mix of tellers and cafeteria that will make holding the side entrance to consulate absolutely essential.

Some external walls have been moved to make spawn peeking tougher and protect the attacking team on their approach to the building, and the whole thing has been polished up a bit too. It’s a welcome shift for anyone that’s taken a burst of automatic gunfire to the face in the first few seconds of the round.

Grim Sky’s new defender represents the biggest paradigm shift to the defence in a long while. Clash, a member of London’s Metropolitan Police Service,

Clash’s defining ability – and primary weapon – is a giant transparent shield with a taser strapped to the front, known as the Crowd Control Electro shield. This shield protects Clash’s entire body, like Montagne, but also fires an automatically aimed taser at anyone in sight that deals a low amount of damage and slows targets down substantially.

Attackers don’t have the wealth of options to counter a shield operator, and Clash can’t melee or hip fire when she’s behind it. The taser discourages aggressive pushing, and will panic enemies who may find themselves falling back until they can get a more favourable fight.

This is a huge change, as Clash’s shield makes her well suited for safely gathering intelligence on attackers, but also gives the defenders a vanguard to rally behind for counterpushing enemies. 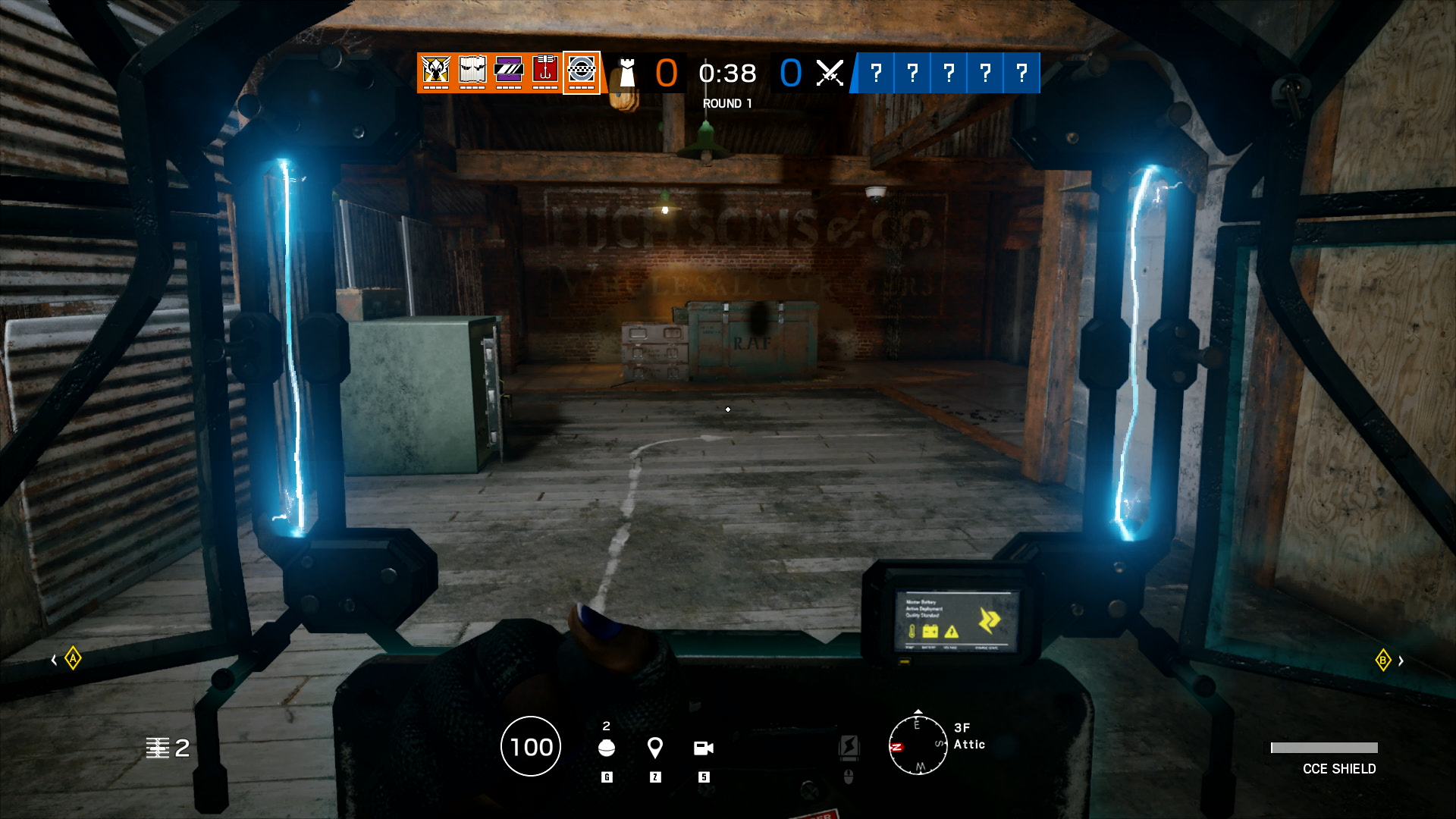 This proved massively useful during our play sessions for attacking enemies that had over-extended, but Clash absolutely needs support to be effective. Clash has access to a high-damage pistol and an accurate machine pistol and while they’re sidearms both are effective at putting an enemy down but the real kicker is that to fire either of these weapons you’ll need to put the shield away.

Link up with another defender and you can divide your enemies and let your armed assistant clean up for you, but Clash is defenceless against a good flank, meaning positioning is everything.

So much of the current meta in Siege says that when you are outnumbered, you should fall back into a defensive position and wait for the attacking team to make a mistake. This can be a struggle for defenders and allow attackers to snowball an early kill into a win, but with Clash there’s a defender capable of halting the momentum of the attacking team.

Maverick, Delta Force commando and blowtorch extraordinaire, is the game’s new attacker. He brings a hefty 50. Cal DMR and an M4, and while these are decent in a pinch, Maverick’s main strength is his ability to quietly carve holes in any destructible surface.

Maverick’s blowtorch is his primary gadget and can be used freely to cut holes into destructible surfaces, including reinforced walls, roofs, ceilings, Castle’s barricades and pretty much everything else.

The only thing I tried the blowtorch on that didn’t result in holes cut into it was Mira’s Black Mirror, but considering you can cut holes in anything it’s easy to circumvent these mirrors on an assault.

It could mean the end of the Bandit trick, which sees operator Bandit put down his electric batteries to destroy breaching objects, as Maverick can just cut through the wall at the bottom. Sure, this might mean Thermite gets shot in the feet as he plants his explosives, but you know, progress. 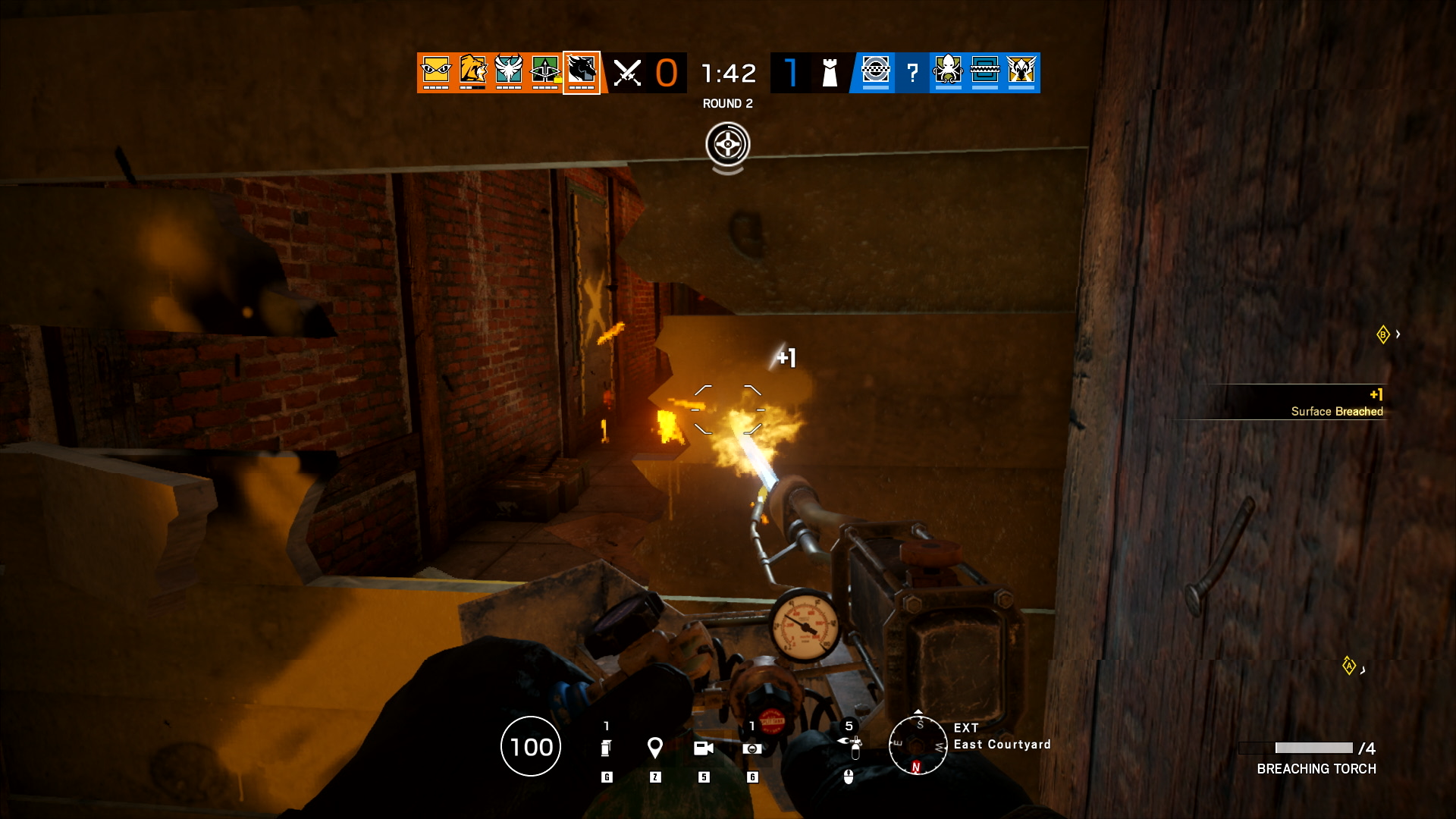 Maverick doesn’t bring a big change to the attacking game, but his toolkit does provide a stealthy option for attackers. Whether it’s by quietly opening holes for a Glaz to get eyes on the objective, or even Maverick themselves going lone wolf and taking a different approach while the rest of the team cause a distraction.

I was a little underwhelmed with Maverick during my early playtest, but I suspect Maverick is a character whose use will become more obvious after some time in the wild, as the community explores the many uses for Maverick’s blowtorch, and cheeky spots where a small hole can provide a large advantage.

The launch of Rainbow Six Siege: Grim Sky will be accompanied by a brand new Frost Elite Skin, something we’re certain hardcore players will be eager to unlock in the coming weeks. You can check it out below: 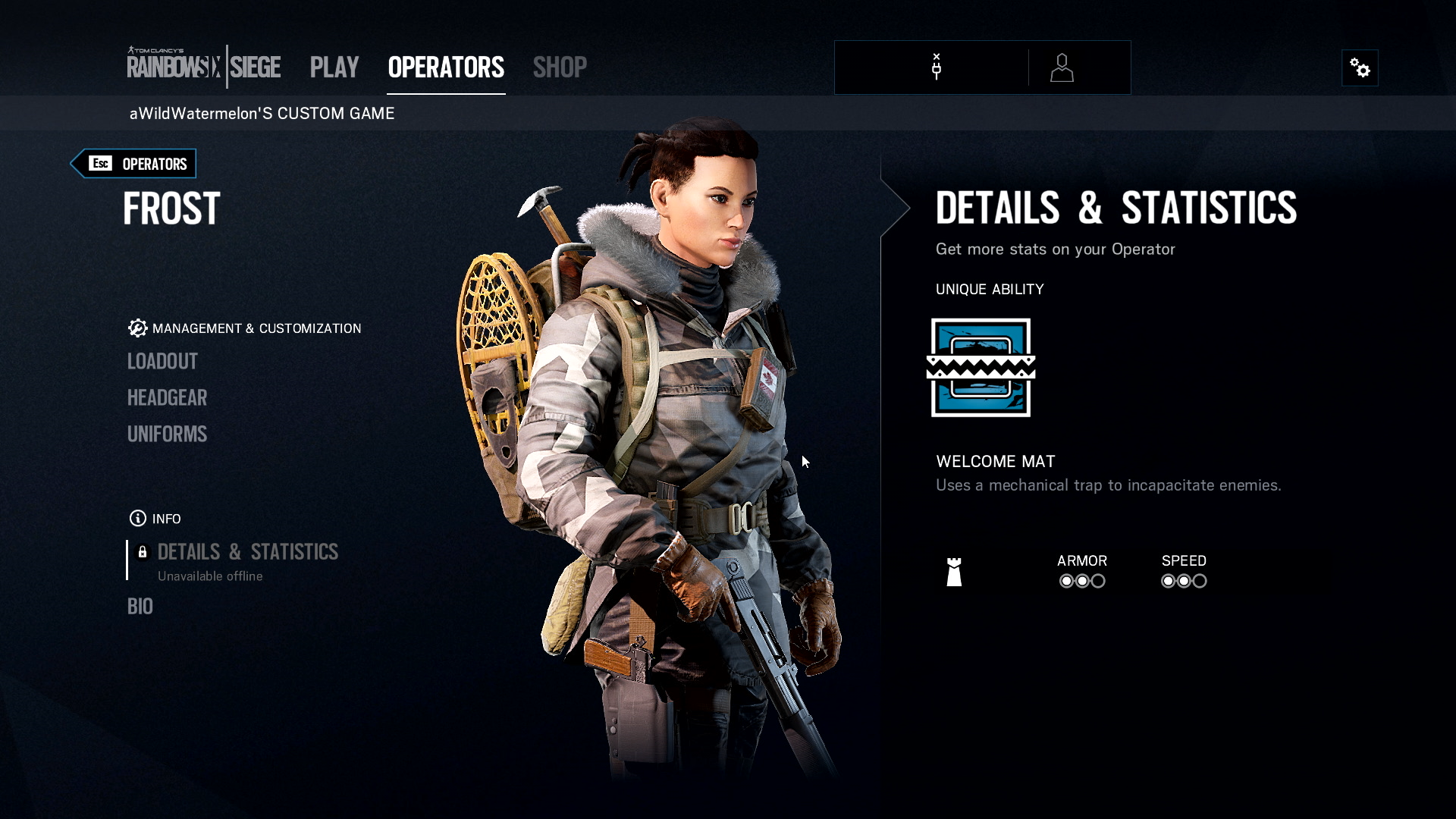 Announced at the Paris Major, Ubisoft announced that team-specific esports skins would be available with the launch of Grim Sky, with 30 per cent of each items sales going to the requisite team.

As a long-term Rogue fan, I’m excited to be able to represent my team while grinding ranked matches. It’s also good news for Rainbow Six Siege’s esports ecosystem to let fans support teams by buying cosmetics. It’s indicative of a better financial model for the game, and this is probably why so many big organisations are now buying into esports. 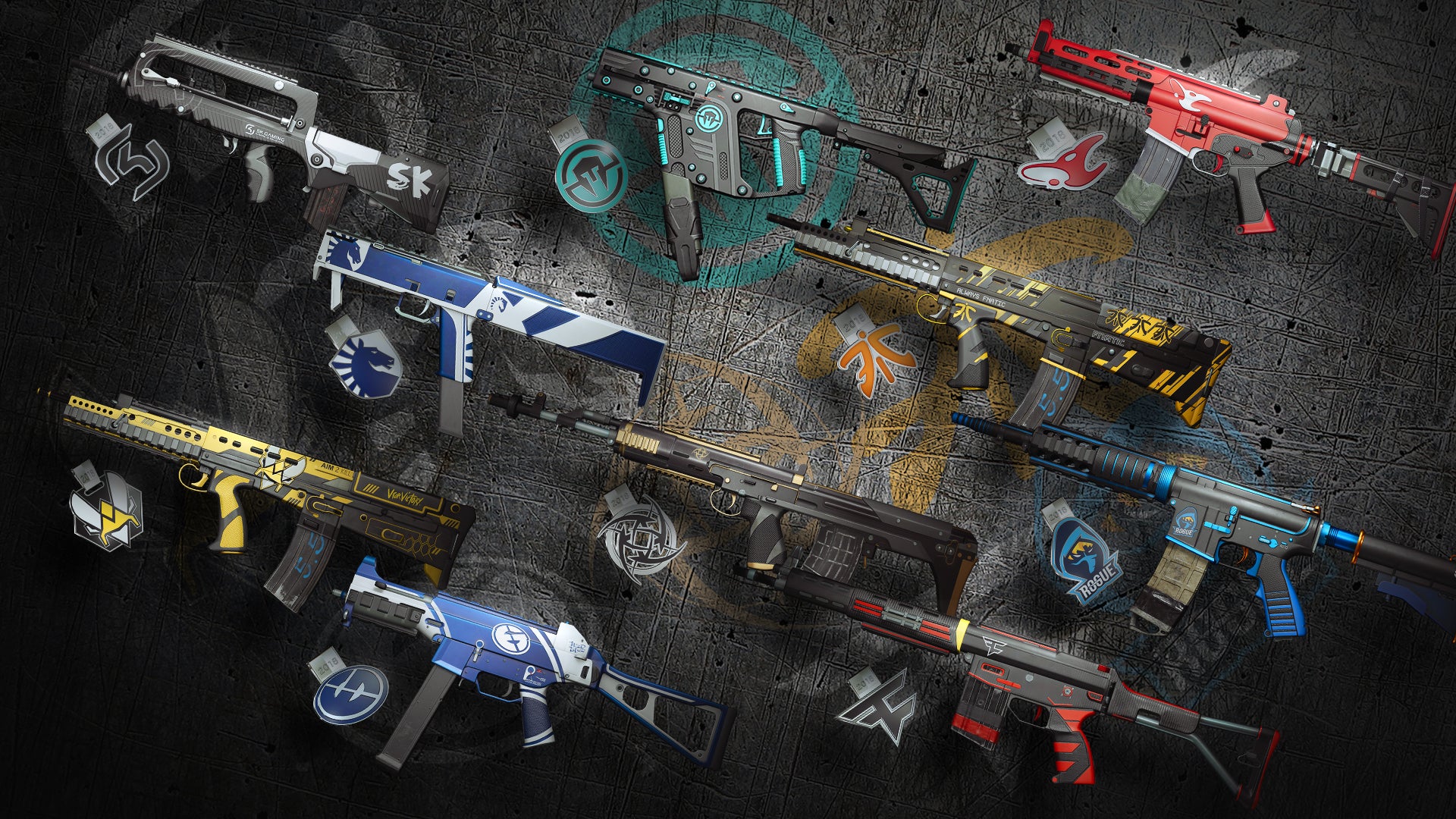 Are you looking forward to Operation Grim Sky in Rainbow Six Siege? Let us know on Facebook and Twitter @trustedreviews.