Huawei ploughed on ahead with its latest product reveals despite the cancellation of MWC 2020. At its launch event, we got the chance to speak to Huawei’s UK MD Anson Zhang – who believes there’s a clear reason customers want foldables and, without mentioning it, suggests Samsung Galaxy Z Flip isn’t satisfying this.

“We think it’s a more friendly way for end-user usage … you do the foldable in order to enhance the user experience. Why do people [want] a foldable? … They want a device with a bigger screen but pocketable – that is the reason behind [it].

“It’s not just for looks for a foldable, for [looking] cool … if you open it up and there’s no more smartphone, why … do [a] foldable?

“You do foldable in order to have better views – reading, video, even multi-task as Richard [Yu] showed.”

Huawei’s event saw the reveal of the new Huawei Mate Xs, Huawei MateBook Pro X, Huawei MatePad Pro and Huawei MateBook D. The range had some interesting new additions across the board – from improved selection of apps to sleek new colours – but it was the ongoing saga of foldables that remained the eye-catcher for many. 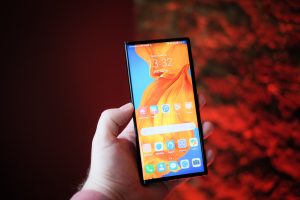 For the Huawei Mate Xs, the company stuck to a plastic foldable design but, according to Zhang, Huawei had explored some Galaxy Z Flip-like options too:

“At the beginning, we have also another solution similar to the glass fold. That way it’s more, let’s say, secured … when you see that one, there’s a gap … at the edge. That is a more simple way to do the hardware design.”

Zhang says Huawei challenged itself to create “wise technology”, spending “huge money and energy” to develop “this kind of technology ourselves”. This is a different approach to Samsung, which worked with German manufacturer Schott for its foldable screen.

Zhang remained extremely coy on if we could see a flexible MatePad or MateBook, joking: “I won’t be surprised if the company released anything in the future.”

Away from foldables, both Zhang and Huawei CEO Richard Yu, who presented the keynote, were keen to stress that Huawei is back when it comes to apps. Huawei has been hard at work on improving its AppGallery to remove the barrier to entry that its lack of Google services now brings.

Zhang states: “We started to Huawei AppGallery in 2018, which is less than two years, and we are very happy to say … we already have more than 400 million monthly active AppGallery users globally and we have 26 million in Europe [with] almost around three million in UK.

“… three million monthly active users in the UK [and] purposefully we haven’t communicated, it’s just by … organic growth … and nowadays we’ve started more communication with [developers] and they will be more active over there which means that AppGallery growth will be more [rapid].”

“We do believe it will be a very successful story.”