The Mate Xs might be a minor update, but considering we didn’t get a proper European release for the Mate X it doesn’t feel needless. It would have been odd selling last year’s model at a high price with older internals and the improvements to the hinge and display are always going to be welcome. I still have plenty of questions about software and I have yet to really see how apps adapt between folds - this could make or break the Mate.

Even though the Samsung Galaxy Fold was first, it was the Huawei Mate X that really got us excited about the possibility of foldable phones, and now with the Huawei Mate Xs, the Chinese brand has sprucing it up for 2020 with a new chipset, updated cameras and hopefully a UK release.

The Huawei Mate Xs is a very minor refresh to the brand’s first foldable phone. It retains the same folding design with a main tablet screen that folds down into a more traditional smartphone, and is still a supremely built gadget that shows just how impressive Huawei’s research and development has become. 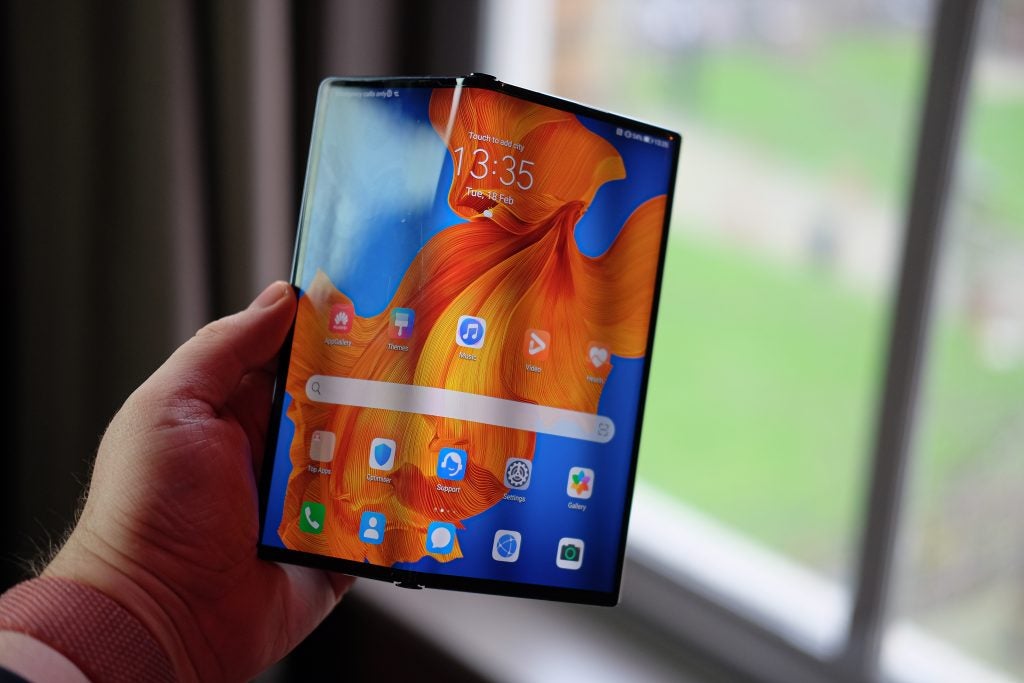 As ever, the cloud hanging over this phone – and the forthcoming Huawei P40, which we expect to see in March – is the ongoing Google ban. While the Mate Xs is built on Android AOSP (the open source version of the software) it lacks Google Media Services, which is the foundation for the Play Store.

Like the Mate 30, the Xs ships without the Play Store, so lacks access to Google apps like Gmail, YouTube and popular UK-based banking services. Huawei is combatting this with its own App Gallery and Huawei Media Services (HMS), though whether these will offer viable alternatives doesn’t feel quite clear yet.

What is clear is that Huawei is still arguably the most innovative of the big tech brands, and the slew of newly announced products (MateBook X Pro, MatePad Pro) help cement that position. It’s the Mate Xs that really catches the eye, though.

Related: The best foldables from CES 2020

When I first held the Mate X last year I felt it would be the best way to utilise a foldable. My opinion has wavered slightly with the more simple approach taken by the Galaxy Z Flip, but I’d say the Mate’s form still makes the most sense. 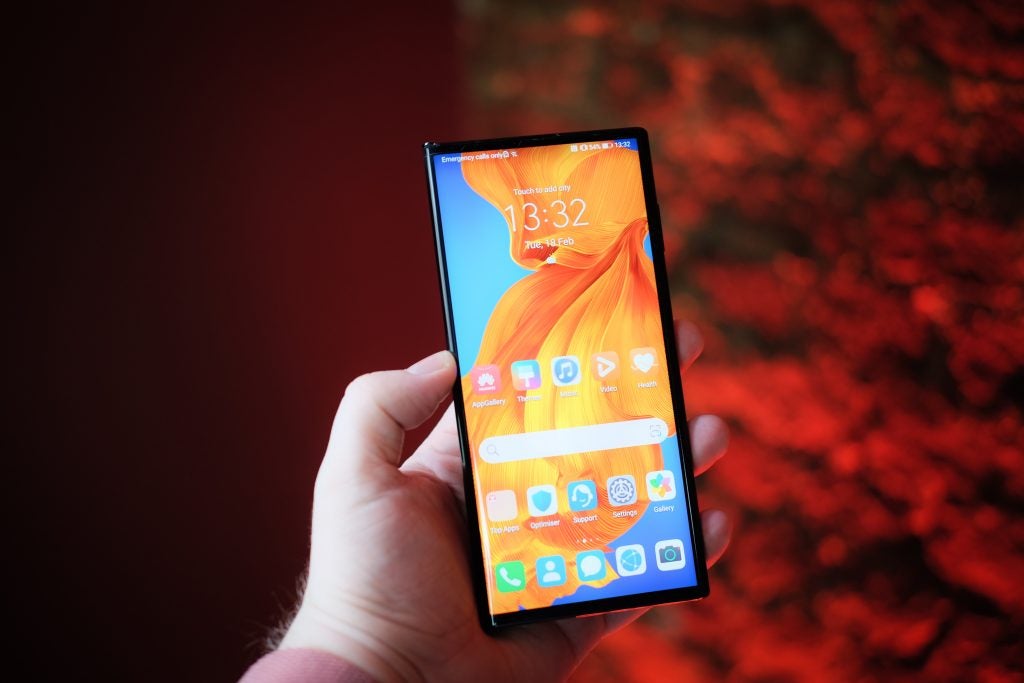 Instead of having a completely covered display inside, the Mate Xs has one large 8-inch panel that folds in half to create both a 6.6-inch front screen and a 6.38-inch rear panel. This rids it of having a useless outer display (sorry Galaxy Fold) and adding in a handy rear panel that’s great for selfies and the like.

When it’s folded down, the Mate Xs feels more like a phone than the Fold, albeit a chunky and rather heavy phone, and actually puts less emphasis on its tablet form-factor as a result. When I was using the Galaxy Fold I unfurled it every time I wanted to do something, whereas here I think I would be happy using the front screen for stuff like navigating and replying to messages. 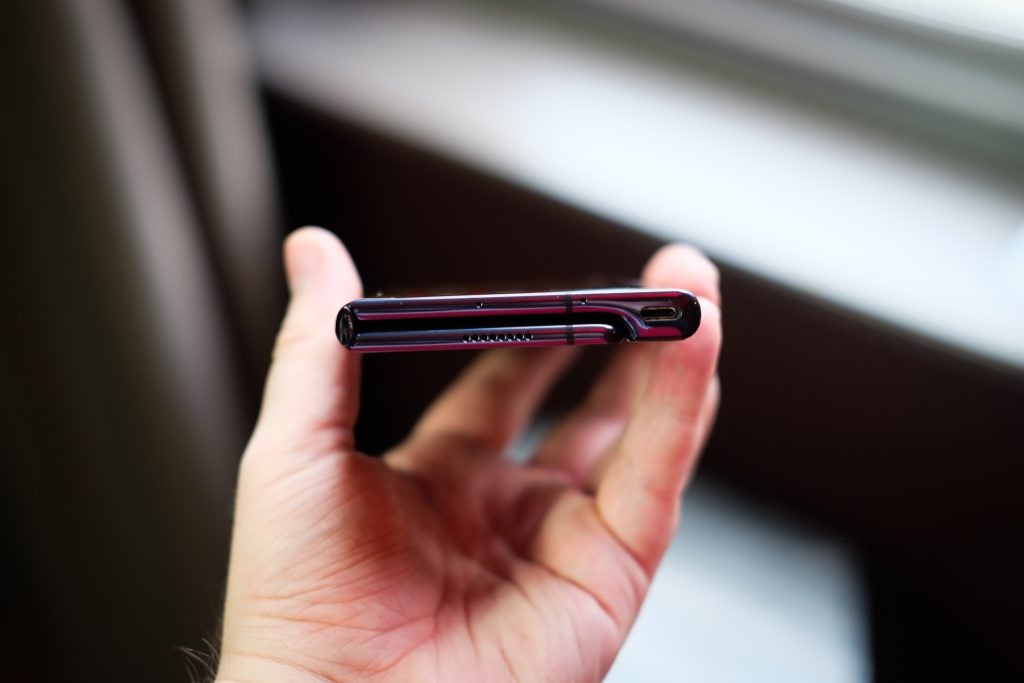 It’s a high-res OLED panel that’s still plastic, however, Huawei did say there’s been some added protection to the layers to make it more durable. The Falcon Wing hinge has been upgraded with a firmer feel and a more satisfying click when it’s shut.

Unfold the Mate Xs and the 8-inch 2400 x 2200 panel is sharp and colourful, even if the squared-off dimension isn’t ideal for video. You’ve got a thicker part towards the right side for gripping on to and a lot of the internal components and the cameras are housed here too. 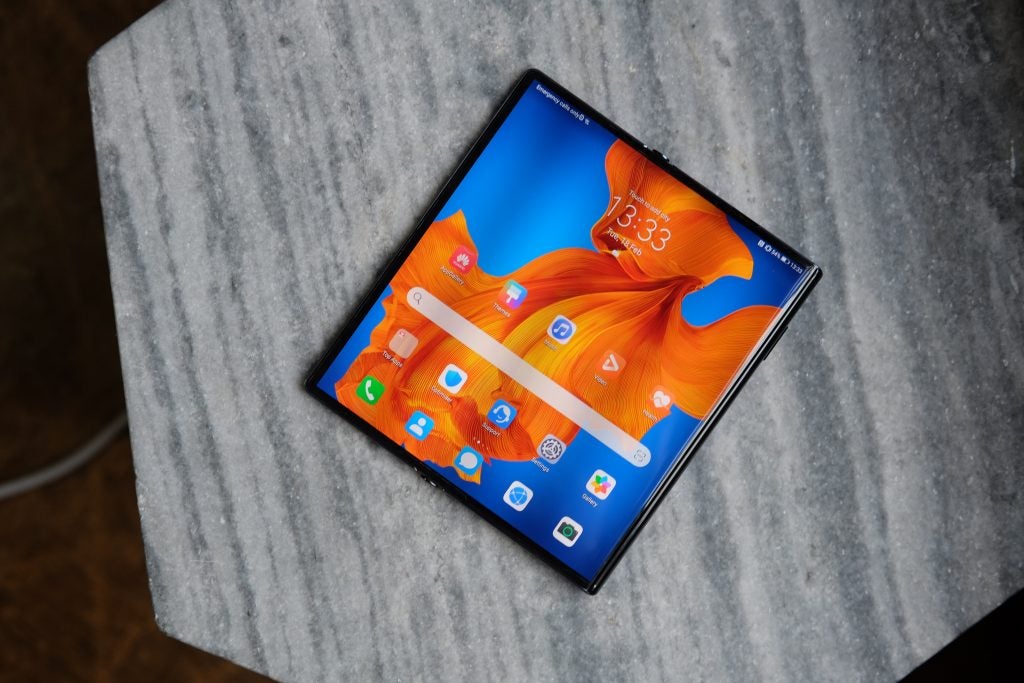 It’s an overall smart design that is virtually the same as the Mate X. The only real issue is protection – as this is a plastic screen it’s more prone to damage and with the screen always out there could be more of a chance of damage. 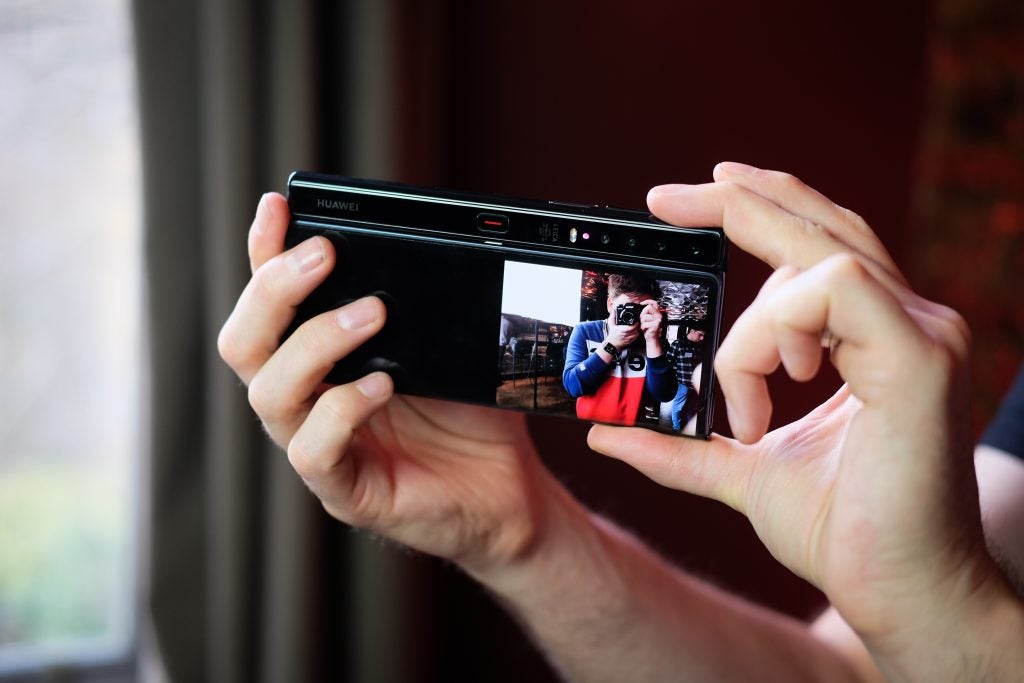 While the design is virtually the same as the original Mate X, the Xs has received a number of internal improvements to both the camera and chipset.

Powering the foldable is Huawei’s own Kirin 990 5G chipset. This is the same, supremely capable silicon you’ll find in the Mate 30 Pro and I can only assume it’ll be the heart of the P40 too. It looks like the Mate Xs won’t come in a 4G only flavour, which is hardly a surprise for such a high-end phone.

Using the Mate Xs at a briefing session in London it felt immediately quicker than the previous version, especially how the screen adapts when you fold it. I’d put this down to improvements with the EMUI software, but the faster chipset should be helping here too. 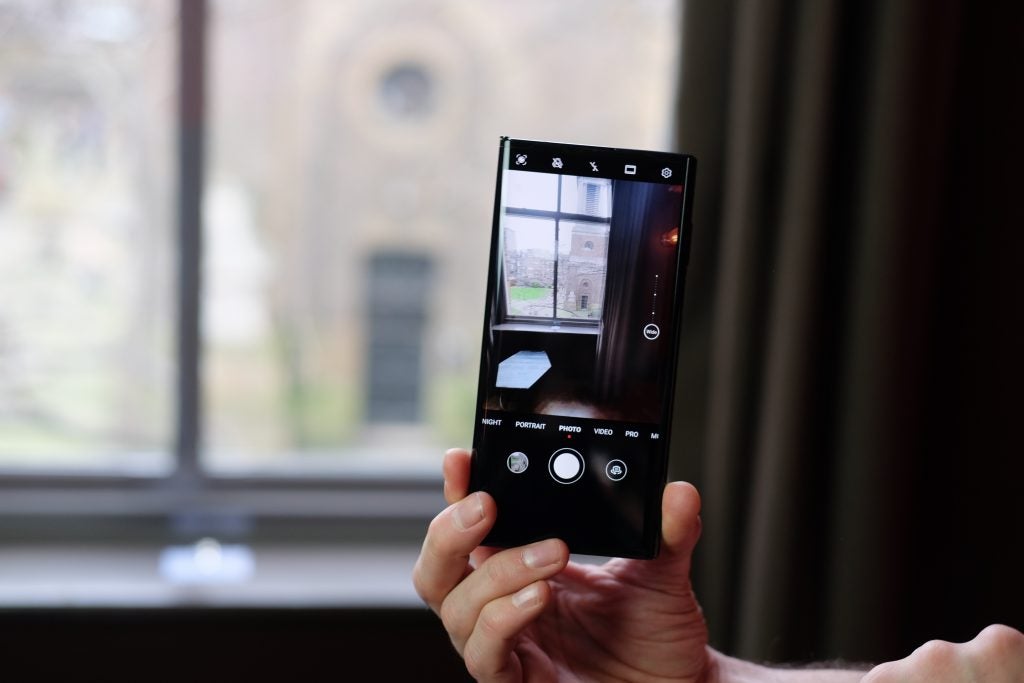 A lot of the camera skills come from the Mate 30 Pro, including a main 40-megapixel sensor with an f/1.8 lens; 8-megapixel 80mm telephoto and 17mm 16MP ultra-wide.

Due to the folding nature, there’s no need for a dedicated front/selfie camera here. If you’re taking a selfie you can use the same main sensor and utilise the rear panel to get your positioning right.

We were big fans of the pictures captured by the Mate 30 Pro and considering the similar optics I would expect the Mate Xs to take just as good snaps. One slight disappointment is that we expect the P40 to once again push Huawei’s camera system further and, of course, we’ll likely have to wait for third Mate X iteration for those improvements to trickle down.

Keeping the phone going is a split 4500mAh battery that can be charged up via an included 55w charger. Huawei says a 30 minute charge will give you a very impressive 85%. 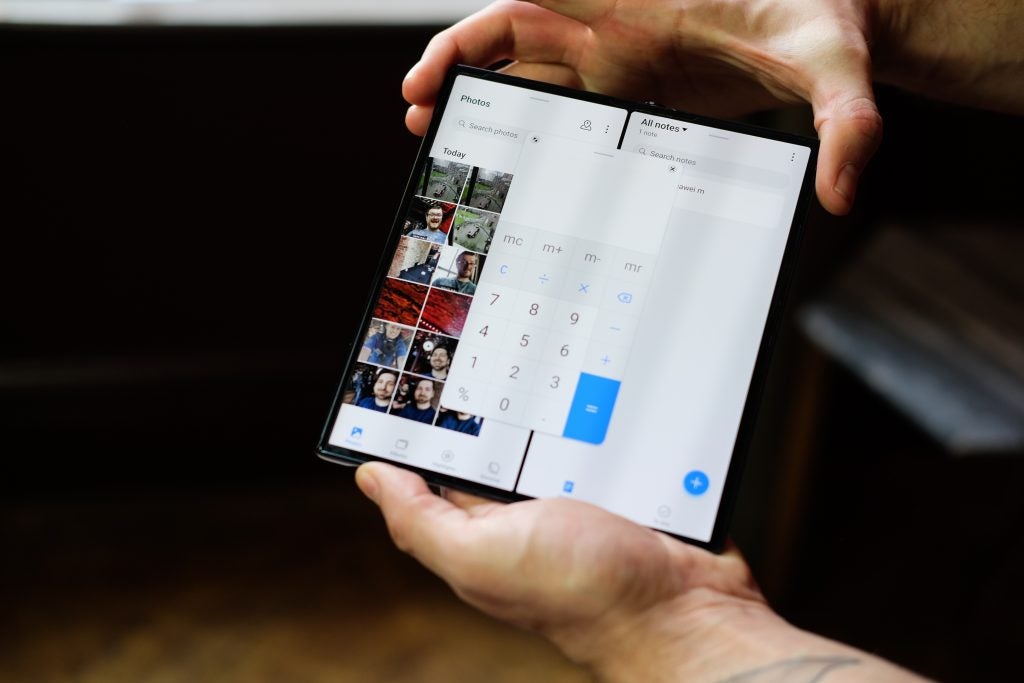 The Mate Xs might be a minor update, but considering we didn’t get a proper European release for the Mate X it doesn’t feel needless. It would have been odd selling last year’s model at a high price with older internals and the improvements to the hinge and display are always going to be welcome. I still have plenty of questions about software and I have yet to really see how apps adapt between folds – this could make or break the Mate.

Hopefully we actually get a UK release this time around as the Mate Xs is an enticing and exciting prospect.