It’s the semi-finals of Sky and MTK’s twin Golden Contract boxing tournaments tonight, with both the featherweights and the super lightweights involved. The draw has been made and all the fighters are looking to progress to the finals. Our guide tells you everything you need to know to watch all the action, on any device, wherever you are.

Now, at the semi-final stage, the stakes are high, especially in the featherweight face-off between Leigh Wood and James ‘Jazza’ Dickens, where two high-profile titles are on the line.

In the super-lightweight division, Ohara Davies is favourite to go all the way, but all three other remaining competitors will certainly have something to say about that. 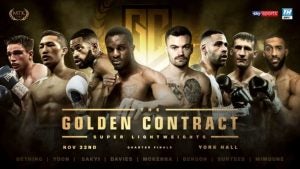 If you aren’t sure if you can access Sky Sports, ESPN+ or Now TV where you are, then the best way to get around your issues might be a VPN. That’s because access to normal coverage might be geo-blocked – this means you’re prevented from watching outside your home country, generally due to rights reasons.

At Featherweight, the WBO European belt and the Commonwealth title are both on the line as Leigh Wood faces Liverpool’s Jazza Dickens.

Wood is the favourite due to his physical advantages in height and reach, as well as his tremendous quarter final performance against David Oliver Joyce. However, Dickens performed well himself, in defeating Carlos Ramos, and is not to be underestimated.

Walsh is the pre-match favourite but McCullagh has a notoriously awkward and evasive style − it’s a hard fight to predict as a result.

In the Super Lightweight tournament, the favourite Ohara Davies struggled to make weight, only doing so at the second time of asking. He’s expected to get past tough fellow Londoner, Jeff Ofori, who has been a career lightweight to this point and contested the Southern Area Lightweight Title not so long ago.

The other semi-final is harder to call, with Frenchman Mohamed Mimoune taking on Northern Irish opposition in Tyrone McKenna.

McKenna has a sizeable height advantage but normally opts to box at closer range, negating that advantage. Mimoune came out all guns blazing in the quarter final and stopped Darren Surtees, so this one is set to be a cracker. 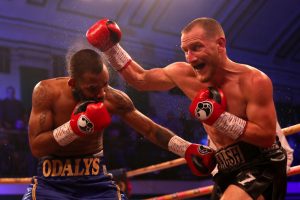 There are several scheduled undercard fights, though how many of these are actually broadcast depends on how the other fights progress.