CyberGhost is one of the longest established virtual private network (VPN) services, catering to both the privacy-conscious and streaming video enthusiasts.

The CyberGhost virtual private network (VPN) service aims to cater to privacy-conscious users and those who want to watch streaming video services in other countries.

Since 2017, CyberGhost has been owned by malware-maker-turned-cybersecurity firm Kape Technologies, which also bought rival Private Internet Access in 2019. Both subsidiaries continue to operate independently.

CyberGhost is rather expensive if you opt for the £10.89-per-month subscription online, and its £41.40-per-year annual pricing is also somewhat pricey. However, if you buy a two-year subscription for £69.36, it works out at a competitive £2.89 a month. There’s also a one-day free trial, if you want to try out the service at no cost.

If you need an extra layer of anonymity, you can pay for your CyberGhost subscription using cryptocurrencies. Sadly, more environmentally friendly methods of anonymous payment, including money orders code cards from physical retailers, are no longer available.

The CyberGhost client opens docked just above the notification area, but you can drag it wherever you like. A panel on the left expands to reveal a searchable list of endpoints in 89 countries, further categorised by function. These include high-security NoSpy servers running on hardware physically located at the company’s head office in Romania, as well as endpoints optimised for streaming, torrenting and gaming. You can also rent your own dedicated IP address in the country of your choice.

A Privacy Settings tab lets you enable DNS-level ad tracker and malware blocking, disable CyberGhost’s dedicated DNS servers (used to reduce the risk of DNS leaks) and turn off its automatic kill switch, which stops all internet traffic if your VPN connection fails.

A Smart Rules tab allows you to define the behaviour of the client. You can customise whether it starts and connects when you log into Windows, whether it automatically launches selected applications upon connection, or how it behaves when it detects that you’ve connected to an unknown Wi-Fi network. You can also choose any programs you want to treat as exceptions, with their traffic routed outside the VPN connection.

You can configure it to automatically launch when you open specific apps, too. Further options can be found in a Settings tab at the bottom left of the window. These include VPN protocol and OpenVPN connection protocol, and the ability to disable CyberGhost’s on-by-default random port selection and IPV6 disabling. 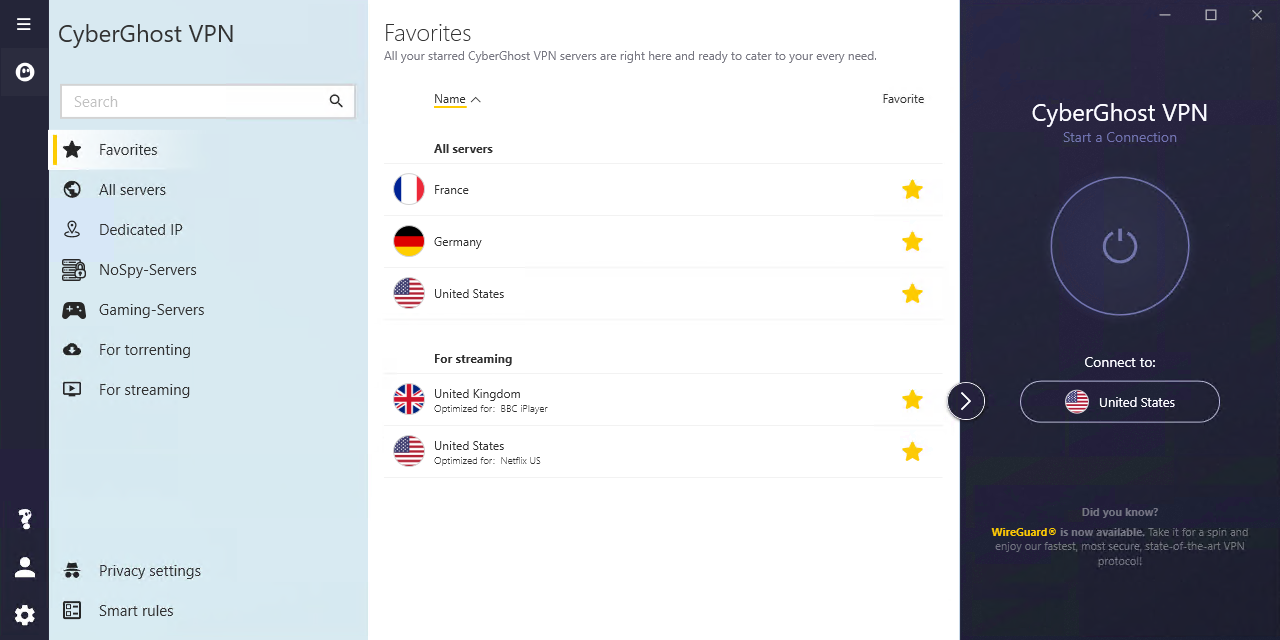 CyberGhost’s performance was below average all round, but only its US throughput was slow enough to be particularly noticeable during day-to-day online activity. Like an increasing number of notable VPN providers, CyberGhost supports the fast new WireGuard protocol, but defaults to auto-selecting a protocol based on network conditions. Forcing the client to use WireGuard didn’t produce any noticeable improvement in US connection speeds.

CyberGhost’s dedicated streaming endpoints generally work well, and can be handy if you want to stream TV without interruption while securely connected to internet via your VPN.

Should you buy CyberGhost?

CyberGhost’s interface is clear and easy to use, and dedicated endpoints cater to streaming media enthusiasts. It’s based in Romania, where EU data retention laws have been declared unconstitutional, and it doesn’t log or store identifying data such as your IP address.

The accuracy of CyberGhost’s no-logging policy hasn’t been proven in court or by an independent audit, so those who need evidence-backed security should consider some of its rivals, notably ExpressVPN. If you’d just like a faster and cheaper service, Surfshark costs the same for two years as CyberGhost costs for one. Otherwise, check out our Best VPN round-up for more options.