Galaxy S8 vs OnePlus 3T: Is the Galaxy S8 one flagship the OnePlus 3T can’t kill? Here’s how the two phones stack up.

The Galaxy S8 has been unveiled in all its curvy glory, and there’s no doubt Sammy has churned out yet another phone marvel – and one which looks like it might just steal the title of best Android phone from Google’s Pixel.

But a device that looks as good, and works as well as the S8 doesn’t come cheap. You’re going to be paying around over £650 for it, and even more if you opt for the larger S8+. Which is why companies, such as Chinese firm OnePlus, have become so successful providing top end hardware at a price that dramatically undercuts its competitors.

We thought we’d have a look at whether OnePlus’ latest 3T can stand up to the might of the Galaxy S8. It’s never going to be as powerful or as nicely designed, but it’s also a hell of a lot cheaper. Is that enough to make it worth buying over Samsung’s latest? Here’s all you need to know.

There’s no doubt Samsung has the edge when it comes to design. The Samsung Galaxy S8 measures 8mm thick and weighs in at 155g, while the ‘Infinity’-style screen wraps around the sides of the phone to make for a distinctly sleek-looking device – even if the OnePlus 3T is a slightly thinner handset at 7.4mm.

Still, that 5.8 inch (6.2-inch on the S8+) ‘Infinity Display’ – Samsung’s term for a screen that takes up almost the entire front of the handset – really does make a difference from a design perspective. It also means the bezel on the front has been reduced, a factor helped by the absence of a physical home button. OnePlus’ 2016 handset retains the physical home button and looks a little old-school by comparison. 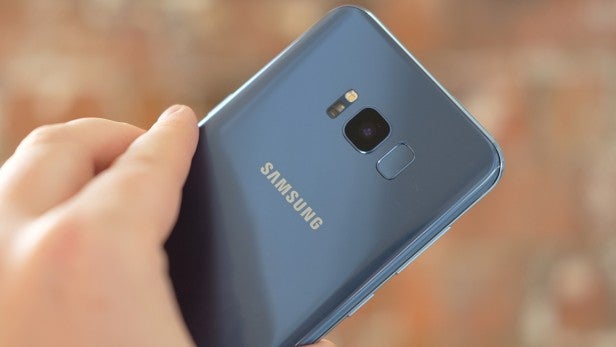 One advantage of having the home button on the OnePlus is that the fingerprint scanner remains on the front of the device, while Samsung has been forced to shove it around the back, next to the rear camera. It’s a tad awkward, but most people will get used to it eventually.

The S8 measures 148.9 x 68.1 x 8mm while the OnePlus comes in at 152.7 x 74.7 x 7.4mm. The 5.5-inch screen and larger size of the OnePlus means it might be a tad unwieldy for some – though, there’s no doubt the body made from a single slab of aluminium alloy feels lovely in-hand, even if it isn’t quite as visually impressive as the S8’s glass chassis.

Samsung also has an edge when it comes to waterproofing, with a IP68 certification. This means it’s been tested at depths of 1.5 metres for 30 minutes.

The Samsung Galaxy S8 is available in, black, silver, and blue colour options, while the OnePlus 3T is available in Gunmetal, Soft Gold, and Midnight Black.

“I like the iPhone 7; it’s slick and familiar. But after holding the S8 it feels like a relic. The overly big bezel is ugly and the screen feels crammed in its body. The iPhone 8 needs a drastic redesign to really offer Samsung some competition.”

We’re yet to test out the Samsung Galaxy S8 in full, so we’re unable to say for sure just how powerful it is, but we have seen the spec sheet and had some brief hands-on time with the phone, so here’s an early comparison between the S8 and the 3T. 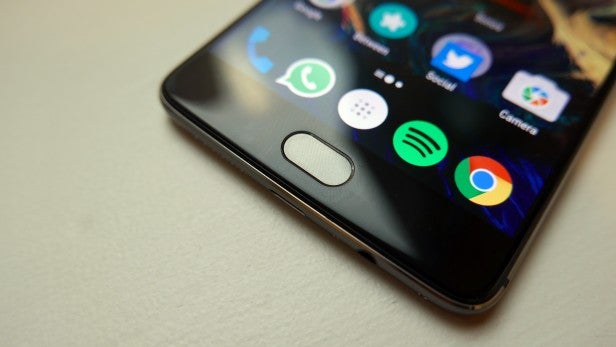 First up, the 5.8-inch display (or 6.2-inches with the Galaxy S8+) comes with an odd 18.5:9 aspect ratio, and generous 2960 x 1440 resolution. That should ensure you’re not noticing individual pixels, especially with a very impressive 567 pixel-per-inch (ppi) density. The whole thing uses AMOLED tech, too, so colours will be vibrant, blacks deep, and energy efficiency very impressive.

The OnePlus also makes use of an AMOLED panel, so you get all the advatages of the S8, but the 5.5-inch 1080p display only makes for a 401ppi. That’s still enough to ensure a sharp image, but Samsung definitely tops OnePlus in the display department.

On the performance side, Samsung has used different chips in different markets. If you’re in the US, you’ll get Qualcomm’s Snapdragon 835, and the UK, parts of Europe and Asia will be getting Samsung’s custom-built Exynos 8895 chip. All versions of the handset come with 4GB RAM, while OnePlus has opted to cram an impressive 6GB into its 3T. 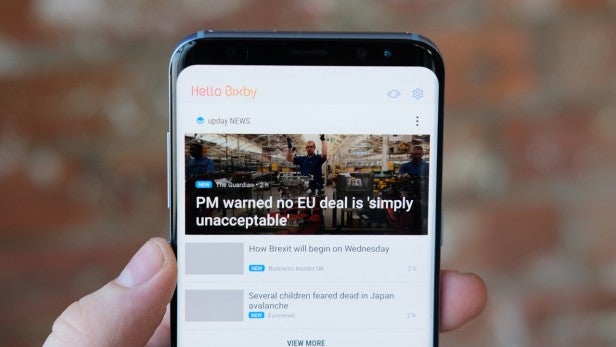 Both processors are built using the new 10nm manufacturing process so there’s no need to worry too much about performance differences between the two. The new process means both Samsung and Qualcomm’s chips should be more powerful and less power-hungry than the Snapdragon 821 in the OnePlus 3T, which is built using the older 14nm process.

That said the 821 is a fantastic chip that arrived towards the end of last year and still provides top performance. In practice, you shouldn’t notice much difference between the S8 and the 3T, but once again, Samsung has the edge on paper.

We’re also yet to try out the Samsung’s Galaxy S8’s camera in full, but it features a 12-megapixel sensor with optical image stabilisation (OIS), and a wide f1/.7 aperture, which along with the same dual pixels that appeared on last year’s Galaxy S7, should allow for more light to enter the sensor, resulting on great low-light performance. 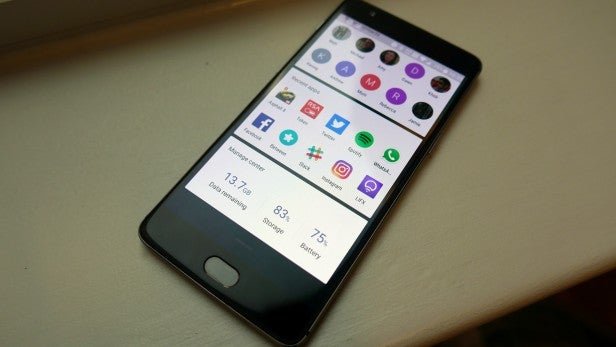 OnePlus has also done a decent job when it comes to the shooter. On the 3T you’ll find a 16-megapixel sensor with 1.12-micron size pixels, along with an f/2.0 aperture lens that supports Phase Detect Autofocus with optical image stabilisation. Performance overall is great for the money, though we suspect Samsung might have OnePlus beat once again in this department.

The 3,000mAh cell inside the Galaxy S8 should make for a day’s usage on one charge, but with its enlarged screen, we’re intrigued to see whether Samsung has provided a big enough cell to ensure the phone can go the distance. The OnePlus 3T comes with a larger 3,400mAh cell, and we found it allowed the phone to go for a full day with between 20-30% charge remaining. Which means OnePlus may have Samsung beat here, but again, we’ll have to wait until we get a full review of the S8 in. One thing the Chinese firm is missing on its phone, however, is wireless charging. Sammy has provided wireless charging on the S8 and S8+, but OnePlus has neglected to join the party,

Although the 3T launched with Android 6.0 Marshmallow, the company has since released an update for Android 7.0 Nougat, so you’ll be able to upgrade to the latest version of Android once you pick up the OnePlus phone. The update makes thing look a little different, with new lockscreen notifications and notification shade. There’s also an extra row of icons on the homescreen, along with changes to the settings menu to offer more help when choosing certain options, and the most important addition: new emojis. 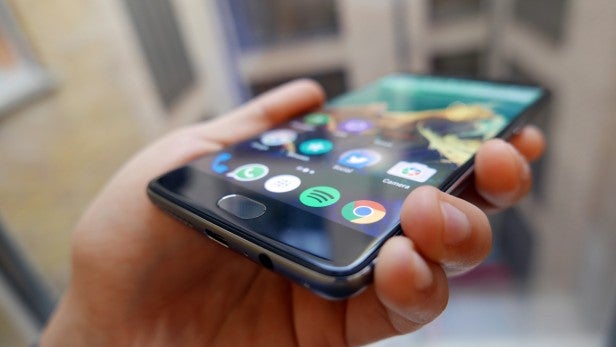 Of course, Nougat’s big Multi-Window feature appears on the OnePlus 3T, too, allowing you to multitask with ease, and the company has generally taken quite a hands-off approach to the OS – allowing Android to speak for itself without too many tweaks.

Samsung’s handset also runs Nougat, and this year, the company has improved its Android skin to make the S8 a pleasure to use. Gone are the days of TouchWiz’s childish icons and intrusive additions to Google’s OS. Now, the Galaxy S series sports a sleek and useful OS, that comes with all the benefits of Nougat, plus a few helpful extras from Samsung.

You can check out a full list of Nougat’s features here.

Samsung’s confirmed the Galaxy S8 will go on sale from April 28 in the UK for £689, while the S8+ will run you £779. That’s about right for a flagship phone these days, even if it is a ridiculously high price to pay for a handset.

If you can’t bring yourself to shell out that much for Samsung’s latest phone, that’s where OnePlus comes in. The 3T is available at the comparatively merciful price of £399. It might not have the very latest hardware, but it’s pretty up to date and will not disappoint when it comes to performance. All of which makes that price a particularly tempting offer.

Here’s a short breakdown of the key differences between the Samsung Galaxy S8 and the OnePlus 3T.

Design: Samsung’s got this one in the bag. Curved edge, almost full-face screen, glass body, no home button; the S8 is a design marvel. The OnePlus 3T isn’t ugly, it’s just very safe, and looks more than outdated next to Samsung’s latest.

Specs: OnePlus provides some seriously powerful tech at a price much lower than Samsung’s asking for the S8. It’s not quite the latest hardware, which you will find in the S8, but it’s plenty fast. Samsung’s got its Chinese rival beat on paper, but don’t discount the 3T in the performance stakes.

Value: There’s no doubt the OnePlus is better value for money. And with powerful hardware, the phone really is a tempting offer for those on a budget. Still, the S8 is a seriously impressive phone, and if you want the best, you have to pay for it.

What do you think of Samsung’s Galaxy S8? Let us know in the comments.