The DJI Mavic 2 Pro and Mavic Air have a lot in common – 4K video powers, a similar folding design, that Mavic name – but they’re actually very different beasts. So which one should you go for? We’re here to help you decide.

The DJI Mavic 2 Pro is the company’s flagship consumer model, priced at well over £1,300, while the DJI Mavic Air is a more compact, more affordable entry-level option at just over half the price.

As its name suggests, the Mavic 2 Pro is pitched mainly at video and photo professionals looking for superb image quality in a fairly portable package. The Mavic Air has broader appeal, with a less advanced camera and a smaller, lighter design that makes it more keenly priced.

But how do the two drones actually stack up based on real-life use? Read on for our thoughts.

One of the main benefits of both drones is that they’re incredibly small and portable. This is particularly the case with the DJI Mavic Air (below left), though: when folded, it measures just 168x83x49mm in size, which makes it compact enough to fit in larger jacket pockets.

Of course, you’ll probably want to pack the controller too (even though the Air can be flown with just a smartphone), but thankfully that’s foldable and features detachable thumb sticks to lower its profile further. 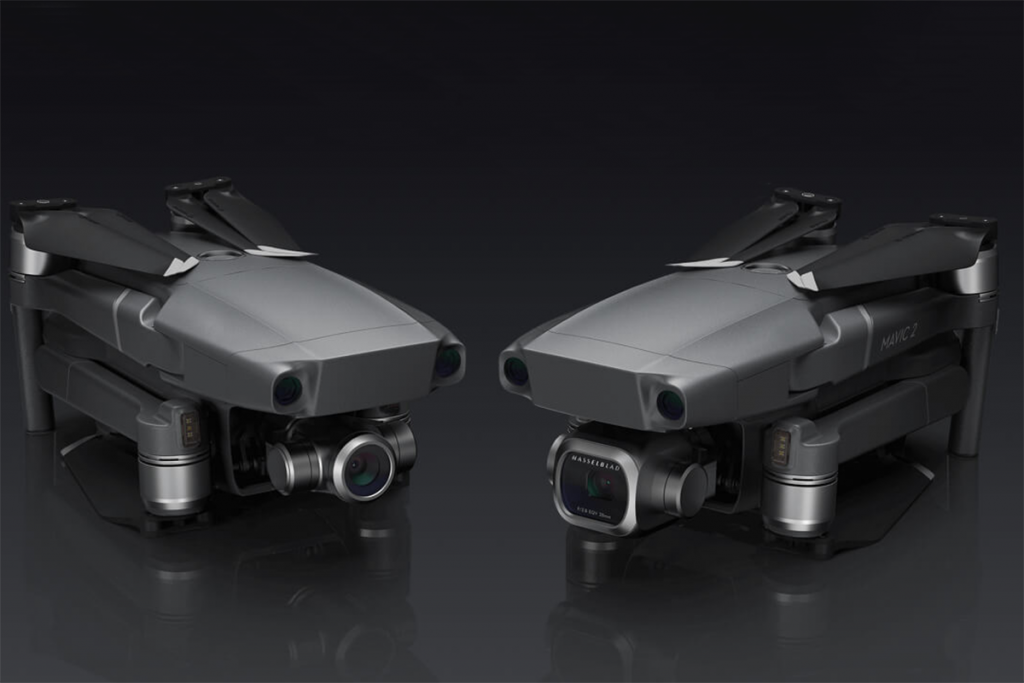 You’ll also find these screw-off sticks on the DJI Mavic 2 Pro’s controller, which has a similar shape to the Air’s but offers an additional LCD display to give the pilot flight and battery info at a glance.

As for the Mavic 2 Pro itself, while it’s also a folding drone it is a little larger and heavier than the Air, measuring 214x84x91mm, so the Mavic Air just edges this round.

Let’s start by looking at flying features. The DJI Mavic 2 Pro can fly for around 31 minutes on a single battery charge – significantly longer than the Mavic Air’s maximum of 21 minutes. In sport mode, it’s also marginally faster than the Air, with a top flight speed of 44mph compared to 42.5mph.

While the Mavic Air has sensors facing forward, backward and downward to prevent collisions, the Mavic 2 Pro has no fewer than ten sensors, covering left, right, up, down, forward and backward. That means, it’s very difficult to crash, at least in good lighting conditions, although obstacle avoidance doesn’t work in sport mode or during high speed tracking. To ensure safe landing in low light, the Mavic 2 Pro has a downward-facing LED to illuminate the ground. 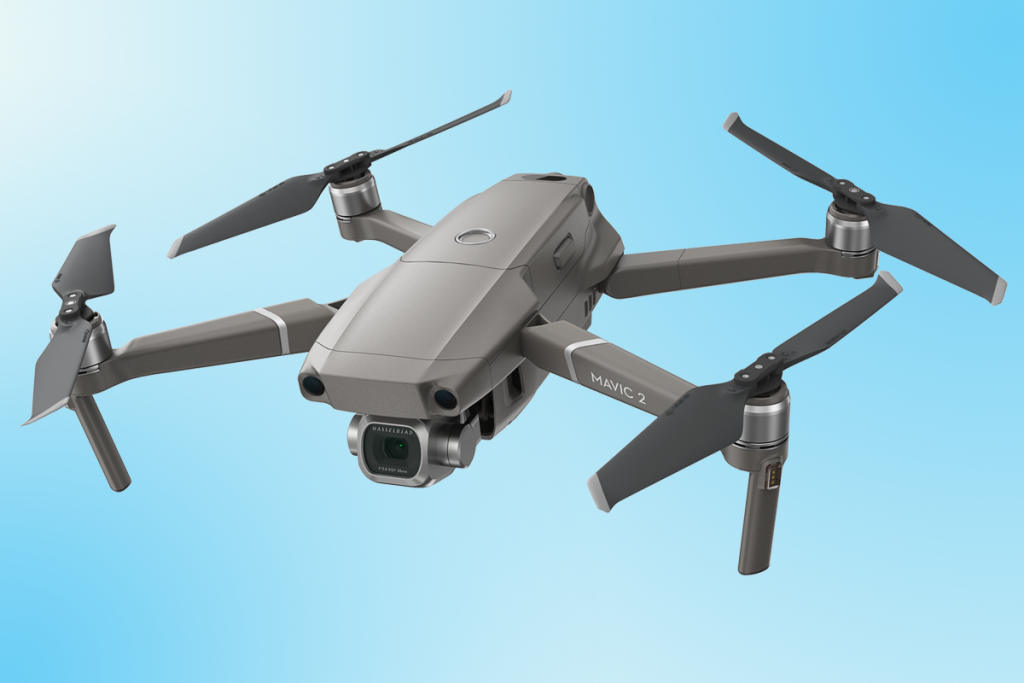 The DJI Mavic Air’s maximum transmission range when using the controller is 4,000m, while the Mavic 2 Pro’s is 8,000m. That’s thanks to an updated OcuSync 2.0 transmission system, which live-feeds 1080p to a companion smartphone with more stability than previous DJI systems. Both drones are compatible with the DJI Goggles headset for FPV flying.

As you might well expect from a more expensive and newer model, the Mavic 2 Pro has the edge over the Air in pretty much every aspect of flight.

The Mavic 2 Pro is the first drone to bear the fruit of DJI’s 2017 acquisition of legendary Swedish camera maker Hasselblad, and that fruit comes in the shape of a Hasselblad-branded camera with a 1-inch, 20-megapixel sensor that supports recording in both 4K, HDR10 and the D-Log-M colour profile (the Mavic Air doesn’t support D-Log, but some other DJI drones do).

This means the Mavic 2 Pro captures four times the levels of colour per channel than the first Mavic Pro, providing more scope for editing later on. It also features an adjustable aperture (f/2.8 to f/11), which should give you more control over how it performs in brighter lighting conditions than the fixed-aperture Mavic Air. 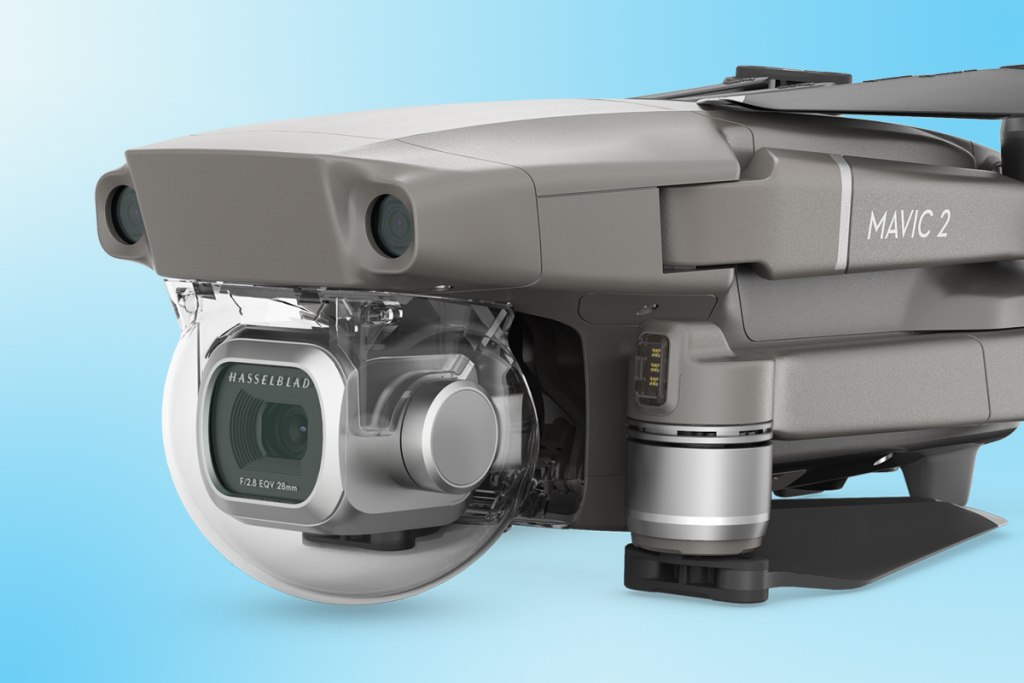 The Mavic 2 Pro’s camera can record 4K video at a bitrate of up to 100Mbps, which is the same as the Air, but its larger sensor size gives it greater dynamic range – and it supports Hybrid Log Gamma HDR, which the Air does not. Both cameras can shoot JPEG or DNG RAW stills photos, but the 2 Pro’s are 20-megapixel while the Air’s are 12-megapixel.

In terms of combined flight/camera modes, the 2 Pro offers a couple of advantages over the Air: a hyperlapse shooting feature produces in-camera moving time-lapse videos; and a new 2.0 version of DJI’s Active Track promises more accurate tracking of moving subjects, even while autonomously flying around obstacles or at the drone’s top speed of 45mph.

Storage-wise, both drones have 8GB of internal built-in space, plus support for microSD cards for those who need more space. Both use a three-axis gimbal to keep the camera steady during flight.

The Mavic 2 Pro’s camera is one of its big selling points over cheaper alternatives like the Air, so it makes sense for it to have better imaging specs. But is it better in practice?

The Air shoots superb video for a drone its size, with 4K clips showcasing its ability to capture sharp detail and the gimbal keeping things level and smooth even while you’re moving the drone at speed (it can also capture 1080p HD video at 120fps for slick slow motion playback). It only noticeably struggles in low light, where grainy noise begins to interfere with the level of detail.

The Pro, however, is operating at a much higher level, with the much larger sensor able to capture a wider colour depth and dynamic range to a degree that its videos, while technically at the same 4K/30fps resolution and speed as the Air’s, appear much more detailed, clear and clean.

The Pro also offers HDR shooting in the HDR10 format, as well as allowing users to shoot in a D-Log-M colour profile for simpler post-shoot colour correction. You won’t find either on the Mavic Air.

The same general factors apply to stills photography, with the Mavic 2 Pro offering noticeably higher quality across the board.

They might have similar designs and names, but DJI has pitched these quadcopters at very different people.

The Mavic Air – highly portable and well-specced for its price – is the mass market all-rounder. The Mavic 2 Pro is intended for pros and advanced hobbyists who demand the best camera performance and flight safety, and who won’t baulk about pay a premium for that (or lugging around a drone that’s slightly larger and twice the weight).

Which is best for you? You’ll need to weigh your priorities carefully, but we suspect most prospective drone owners will be perfectly happy with what the Mavic Air offers. Those seeking the very best image quality from a consumer drone, though, shouldn’t hesitate to pay the extra few hundred pounds for the Mavic 2 Pro.

Which of the two drones do you prefer? Let us know @TrustedReviews.