After years of waiting we finally have a real Beyond Good and Evil 2! Well, almost. Ubisoft has taken the wraps off the long-awaited sequel, and we’ve compiled all the information you need.

Beyond Good and Evil is about as ‘cult classic’ as gaming gets. The PS2 and Xbox original remains a fan-favourite to this day. Beyond Good and Evil 2 was announced with a brief teaser in 2008, before immediately fading into obscurity, joining the likes of Half-Life 3 and, until recently, The Last Guardian, with no sign of a release date, gameplay or any hint of the ability to pre-order the game.

What is Beyond Good and Evil 2?

We don’t have a huge amount of detail on the actual storyline of the game, but the cinematic trailer shown off at Ubisoft’s 2017 E3 press conference certainly whets our appetites for a bonkers romp through System 3, with a hugely diverse range of character designs, personalities, buildings and vehicles.

The world looks richly detailed, with a highly religious theme with age-old temples combined with huge high-rises, and green space overseen by hulking police ships. Beyond the cities, you’ll see lush countryside, huge mountains and you’ll even be able to fly into space without any loading screens. The trailers below set up the game’s tone pretty well; a swashbuckling adventure with lots of cheek and charm, set inside a large spaceship that acts as your home base.

On your ship, each member of your crew has their own purpose and talents.

There’s the hint of an artefact that the player will have to find, perhaps some sort of super weapon.

A year later, at E3 2018, Ubisoft gave more details about the game. A new ‘Space Monkey’ program will get fans involved with creating the game. Through a partnership with HITRECORD, users will be able to contribute music and artwork to the game, which suggests that world details such as billboards on the side of buildings could end up being designed in collaboration with fans.

Payment for these contributions wasn’t discussed on stage, but a tweet from HITRECORD’s Joseph Gordon Levitt confirmed that the company pays artists for their contributions. Presumably this will be the same for Beyond Good and Evil 2.

Beyond Good and Evil 2 release date – When is it coming out?

Despite the new trailers, we don’t have any info on release date. Considering the game was first announced nine years ago, it’s anybody’s guess. But it looks like Ubisoft is well and truly committed to getting this game to market, so we have some hope that it will arrive in the next couple of years.

Beyond Good and Evil 2 trailers

We have a full reveal trailer for Beyond Good and Evil 2, alongside a trailer breakdown direct from Ubisoft. Watch them below.

The latest trailer for Beyond Good and Evil 2 provides a glimpse at how the title’s combat and spaceship mechanics are coming along:

Finally, at E3 2018 we got another new trailer, as well as a trailer to announce the user-generated content element of the game.

Jade and her quirky range of allies from the original Beyond Good and Evil were fantastic for the time, even more so when you consider how short and compact the original was. We’d love for the sequel to take a deeper look at the established universe, providing beloved characters with distinct backstories. The addition of voice-acting and dynamic player choice would be great, showing how your actions impact the world as you progress.

If Beyond Good and Evil 2 ends up being a prequel starring Pey’j, Jay’s adoptive uncle, or even her real father then it could paint a clearer picture of how the world we explored in the original came into being, while also expanding our horizons with new planets, characters and story elements.

Beyond Good and Evil primarily took place on the planet of Hylis, rarely exploring the ambitious sci-fi universe that surrounded it. Granted, the single city in the first game felt sprawling and packed with activities, but it simply wouldn’t cut the mustard in a modern context when games such as Elders Scrolls V: Skyrim and The Witcher 3 boast entire continents to explore.

Michel Ancel has expressed interest in having multiple planets in Beyond Good and Evil 2, each of them being fully featured and navigable by the player. Imagine a slew of unique locales populated by strange alien races and hostile creatures, all posing their own challenges. These could also be littered with optional side quests and locations to discover, giving you incentive to abandon the beaten path.

You might have heard of a little Ubisoft franchise by the name of Assassin’s Creed, which has some of the most intuitive movement controls in the open-world genre. Imagine darting across the rooftops and alleys of an alien metropolis, translating the historical flair of Ezio and Altair into the realm of science fiction.

Jade’s movement felt fast, fluid and natural back in 2003, but is certainly dated nowadays. Giving her abilities a well-deserved overhaul would do wonders for the open-world design of Beyond Good and Evil 2, giving you plenty of gameplay avenues when it comes to combat and exploration.

Combat in Beyond Good and Evil was pretty basic. It was restricted to just a single button, with Jade using nothing but her staff to dispatch an endless stream of alien nasties. The next game could improve so much in the combat department, bringing a range of moves and abilities to our protagonist that truly reflect their years of experience in the field.

Beyond Good and Evil 2 could also introduce a vast number of enemy types across the different planets and cities you traverse, giving us a better idea of the species that inhabit that weird little universe. Dispatching them in different and constantly fluctuating ways should lend the player a slate of play styles to choose from, much like Ubisoft’s other open-world games. 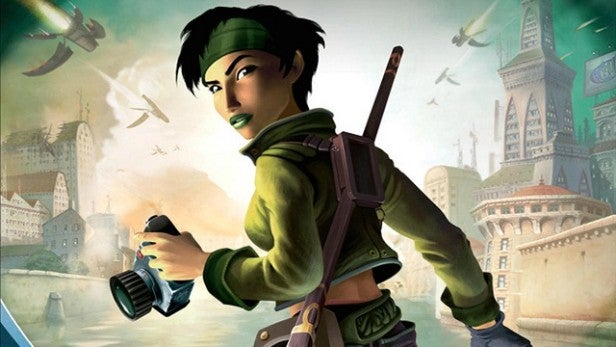 Beyond Good and Evil had its fair share of upgradeable components, letting you power up Jade’s health and trusty hovercraft with the right items. By today’s standards, this is incredibly limited, and wouldn’t stand up to the plate in 2016. Ubisoft has the opportunity to craft a truly unique customisation system with Beyond Good and Evil 2, putting you in the shoes of a badass space photojournalist.

Just imagine all the things you could enhance and personalise. Jade’s camera, staff and outfit are begging to be kitted out with new skills and aesthetics. The possibilities are quite staggering, and that’s without having mentioned her hovercraft or potential spaceship. Your gear could even have different stat bonuses and variants, changing how you approach combat and navigate certain environments.

Jade could influence the world of Hylis using her Iris Network Reports in the first game, convincing the masses into siding with her and forming a passionate rebellion. This was an interesting mechanic, ushering in a generation of player choice that can still be felt today. Beyond Good and Evil 2 could revitalise this in some fascinating ways, letting you choose how and why you want to influence the world around you.

Jade’s position as a budding photojournalist is one that allows the narrative to take liberties that other games would outright avoid. She could stir up a revolution from nothing with just a camera and her wits, cementing her place in the game’s world as a genuinely monumental figure. If Beyond Good and Evil 2 does away with Jade altogether, we’d love to see another character pick up a similar torch.

What would you like to see in Beyond Good and Evil 2? Let us know @TrustedReviews!