Most Facebook users will have come across a moment in their social media lives when a comment or an emoji simply doesn’t convey what you want to say. It’s moments like these where the perfect response is an animated GIF.

For a number of years Facebook cleverly avoided the GIF on its Timeline, with the thought that a Timeline cluttered with GIFs would slow down and ultimately ruin the experience for the end user. There was also some talk of billions of GIFs across millions of users dragging the server response times down too, but that’s probably just one of those internet myths.

With that in mind then, let’s have a look at how you go about posting a GIF to your Facebook Timeline.

Related: How to use Flex storage with Android Marshmallow

What is a GIF?

Before we begin, and in case you’re new to this internet lark, it might be prudent to start by describing what one of these GIFs things are.

Basically a GIF, in the sense that we’re describing it, is an animated image created by adding various images separated with a time delay. The frames are then displayed in a loop and as such create the animation – like drawing a running stickman on the corner of a book on each page, and flicking through the pages to make the stickman appear to run. 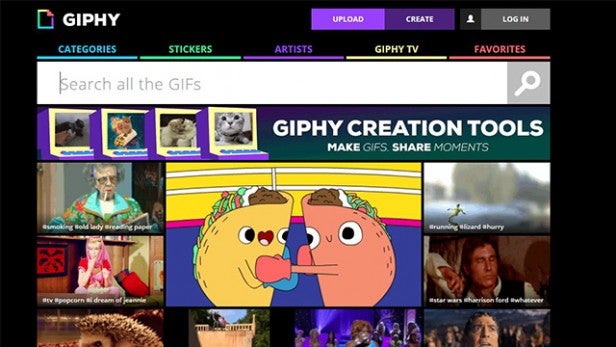 Sadly, posting a GIF to your timeline isn’t quite as simple as posting other image types. You can save a GIF you’ve found on the internet to your hard drive, and view the animation when you double click on it within Windows explorer, but if you post it to Facebook it’ll come out as a static image without the extra frames.

The easiest solution therefore is to bookmark one of the main GIF resource sites, such as Giphy, Tumblr or Imgur. For us the best GIF resource has to be Giphy, and as such we’ll use it for this particular example.

Within Giphy you’ll have access to countless GIFs covering a wide range of subjects, of which you can search for with the bar at the top of the page.

Once you have the perfect GIF, click on the image to access its page and you’ll be presented with a number of Share options under the animation of the image. 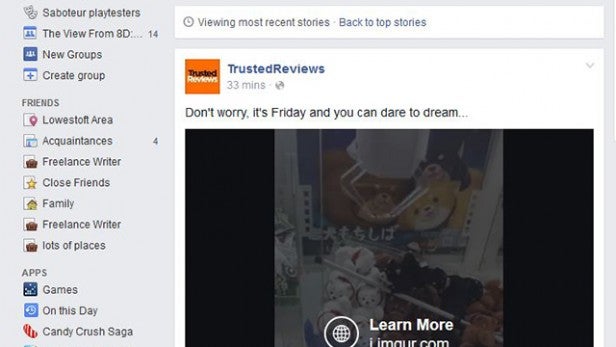 f however you want to post the image within someone’s Timeline, as a response to them, then right-click the GIF on Giphy, and select Copy Image Location from the menu. Move to your Facebook tab, and right-click and select Paste in the Timeline you want the image to appear.

After a few seconds, depending on the speed of your connection and where the image is from etc., a preview placeholder for the Gif should appear – sometimes it does, sometimes it doesn’t, that’s Facebook for you – You can then hit Enter to post the GIF, or delete the link that you pasted in and press Enter to have the link appear without the extra text of the image link.

What if you’ve created your own GIF?

If you’re talented enough to have made your own GIF, then you’ll need to do much the same method as the right-click and paste the image location to the Timeline. But you’ll need to upload the GIF to a location that’s visible to the public first. 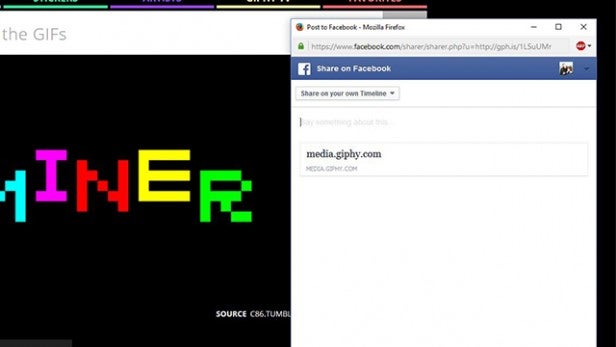 For this example you can create an account on Giphy and upload the GIF then use the method we described earlier to get the GIF on to your Facebook Timeline.

The GIF is a powerful way to convey nigh on any emotion or response on Facebook. It’s used by true Jedi Facebook users, who somehow appear to have a near unlimited resource of GIFs on hand for every situation imaginable.

The key of course to a successful GIF posting comes down to timing, both in the sense of when the image goes up in response to a comment or situation, and how long the animation of the GIF is. Too long or short in either context and you’ve lost your moment, and will no doubt be forever tarnished with the brush of ‘GIF noob’, or something.

It takes practise, but you’ll soon have the hang of it and will probably end up bombarding the comments section below with a collection of amusing GIFs. Please do so, by the way, then the rest of us can use them in our future Facebook posts.