What is the Sinclair ZX Spectrum Vega?

The ZX Spectrum Vega is a miniaturized version of the famous home micro computer from the ’80s which was successfully crowd-funded via Indiegogo and has the blessing of the creator of the original, Sir Clive Sinclair.

Unlike the rival Recreated ZX Spectrum from Elite – which, ironically, is launching at almost exactly the same time – the Vega isn’t trying to replicate the classic Spectrum look and lacks a full QWERTY keyboard.

The system itself is actually a plug-and-play device, with the main unit connecting to your television via a composite cable which is wired into the back. It is powered by a USB connection and features a mircroSD card slot for loading up games. After you’ve gotten bored of the 1000 titles that come pre-loaded, of course. 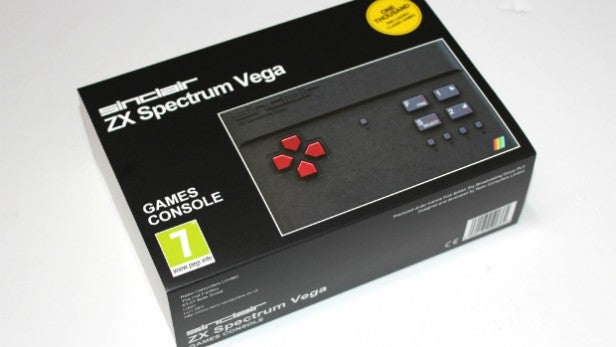 Compared to the Recreated ZX Spectrum, and the real thing, the Vega is looks tiny. That’s largely intentional, because it’s designed to be held like a traditional controller and even comes with a D-Pad and a selection of action buttons.

Trailing out of the back of the device in a rather unsightly fashion you’ll find composite and USB connections, both of which mercifully have plenty of cable so you don’t have to sit right in front of the TV. The machine is designed to run off the power from your TV’s USB socket and there’s no power supply in the box, so if you find that your TV isn’t up to the task then you’ll have to use your phone charger or something similar.

On the front edge of the unit there’s a microSD card slot, as well as a small green power LED which tells you when the unit is turned on.

While the Vega undoubtedly possesses that trademark Spectrum look, the unit feels a bit light and cheap. There’s clearly not a lot of tech packed inside it, and when gripped tightly the unit flexes more than it should.

The D-Pad also leaves a little to be desired. It’s a single piece of plastic but each direction is separated by a sizeable gap which makes it tricky to hit diagonals – although to be fair this isn’t a problem in most Spectrum titles, which only require up, down, left and right rather than full 8-way control.

On the right-hand side of the unit there are four buttons which are designed to imitate the Speccy’s iconic rubber keys.

Below these you’ll find four smaller buttons which are used for opening up special menus or switching between button layouts in-game.

All in all, the Vega doesn’t feel like something which should set you back £100. Half of that would be a more realistic RRP. The design tickles the nostalgia bone sufficiently but placed alongside the Recreated ZX Spectrum – which, at first glance, could be mistaken for the real thing – the Vega’s charms are markedly less striking. 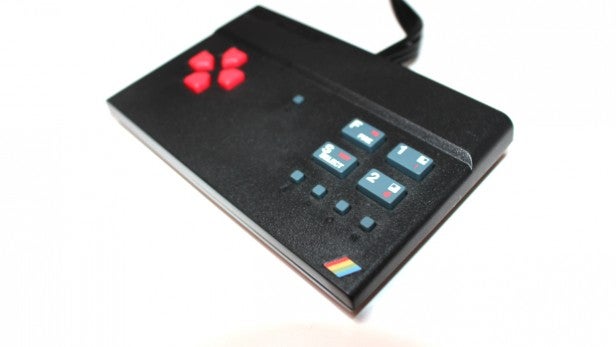 One advantage the Vega has over its rival the Recreated ZX Spectrum is the fact that it’s a self-contained unit and doesn’t require a smartphone or tablet to function. You just plug it into your TV, pick your game and play. The unit has a front-end menu system which allows you to scroll through the 1000 pre-loaded titles as well as pick ones you’ve downloaded from the web and placed on your microSD card.

Because the Vega lacks a full QWERTY keyboard, each pre-loaded game has been specially configured to make use of the machine’s D-Pad and button control set-up, with different functions mapped to various physical inputs. On the original machine, directions and actions would have been tied to keys on the keyboard, but here everything has been simplified, more or less. That means playing action games is a lot more straightforward as movement is obviously controlled by the D-Pad, and there’s usually only one or two action buttons to call upon.

The problems start when you load up one of the many text adventure titles available for the machine. These titles were built around the QWERTY keyboard, and in order to enjoy them fully you have to make use of the Vega’s on-screen keyboard.

This pops up at the bottom and assigns letters to the four main buttons. You can cycle through selections of letters using the D-Pad, and once mastered, it’s actually a pretty clever way of inputting text. It’s nowhere near as intuitive as the real thing, of course. 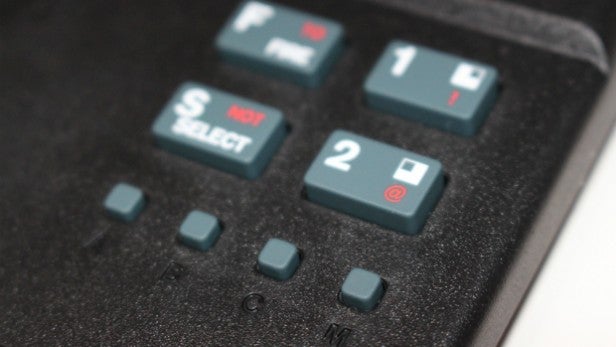 In-game, it’s possible to pause the action and save your progress, which is something you wouldn’t have been able to do on the original hardware. You can also exit the game and drop back to the main menu, which saves you having to manually reset the unit using the button located in the middle of the device. Both of these features would have come in very handy back in the days of the original Spectrum, which used cassette tapes – subject to massive loading times – to store its games.

The packaging proudly boasts that the Vega comes with 1000 games pre-loaded, and this gives it a sizable advantage over the Recreated ZX Spectrum, which only offers around 40 titles via its companion app, some of which require a small one-off payment to play.

Predictably, not all of the Vega’s 1000 games are worth your time, but there are some pretty impressive inclusions, such as Knight Lore, Sabrewulf, Jetpac and Back to Skool. None of these are currently available for Elite’s machine, although it should be noted that Chuckie Egg, Manic Miner and Jet Set Willy are all absent from the Vega’s library, but are present on the Recreated ZX Spectrum. You can of course load them up on a microSD card, should you have the files. 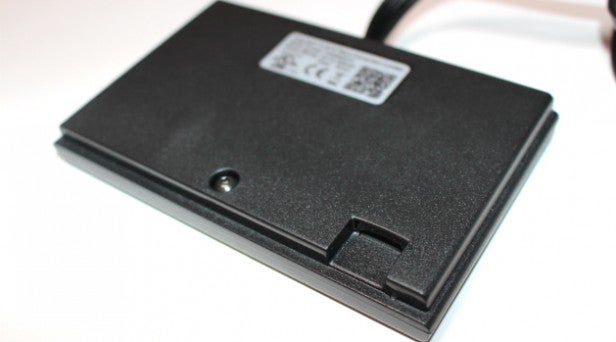 Like the Recreated ZX Spectrum, the Vega’s performance is fantastic. Games run exactly how they should and are totally faithful to the original hardware. The big issue with this particular machine is that it only offers composite output, and if you’re playing it on a modern flatscreen TV then that invariably means having to endure ill-defined and fuzzy graphics. There’s no option to output a HD signal from the device and if your TV doesn’t have composite sockets then you’re going to have to find a SCART adapter, as there isn’t one included in the box.

The Recreated ZX Spectrum on the other hand outputs a sharp signal to your smartphone or tablet’s screen, and can also stream to Google’s Chromecast for a true HD image on your TV. That’s a big plus point for the rival system, although it could be argued that the less defined the image, the more authentic the experience is. After all, you were lucky if you were playing Spectrum games in colour back in the ’80s, while ‘high defintion’ was the stuff of a madman’s dreams.

Running the Vega through an old-fashioned CRT set is arguably the best way to play, but not everyone has one in their house. 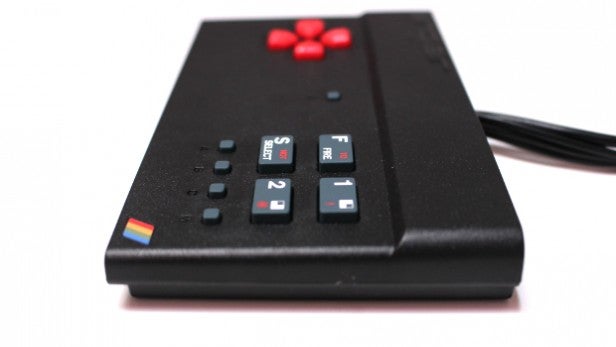 Should I buy the Sinclair ZX Spectrum Vega?

The Vega is certainly a more elegant way of playing Spectrum games than its direct rival, the Recreated ZX Spectrum. You don’t need any additional hardware – outside of your TV, of course – and it comes with plenty of games to keep you busy. You can also load up more games at no additional cost, although this throws up the thorny issue of copyright ownership and piracy.

If you’re used to using a standard joypad then the Vega’s D-Pad and button control setup will also make it a attractive purchase.

However, balancing out these positive points are some serious drawbacks which really shouldn’t be present in a device costing £100. Not offering HD output in this day and age is an odd choice, especially as most people will be playing this on a flatscreen television – the composite image quality is pretty dire. It’s also a shame that you have to be constantly tethered to the TV set by the AV cable and power lead.

Finally, the build quality of the unit leaves a lot to be desired; it doesn’t feel like something which should cost £100. 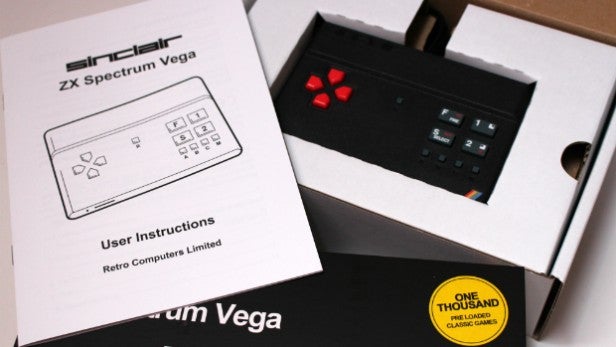 In conclusion though, the good outweighs the bad by some margin. The Vega requires less fuss to get running than the Recreated ZX Spectrum and comes with weeks and weeks of potential entertainment thanks to its pre-loaded library of games. Being able to load up new titles means that no Spectrum game is out of reach. And that’s something which cannot be said for Elite’s unit, which offers no means of loading ROMs and is therefore totally reliant on licensing deals being drawn up with copyright owners and developers.

However, those craving a totally authentic rubber-keyed experience are probably going to be better off with the Recreated ZX Spectrum than the Vega; the irony being that a system which combined the best elements of both is perhaps what the hardcore fans really wanted.

Despite its high price tag the Vega feels a bit cheap and lacks HD output, but is saved by ease of use, a vast selection of games and the ability to load up more titles via microSD card.

The Sinclair ZX Spectrum Vega is available from FunStock.co.uk.