What is the Recreated ZX Spectrum?

As the name suggests, this is a faithful replication of the UK-made 1980s micro-computer that started a bedroom coding revolution and is responsible for launching the careers of many a famous British developer.

While it’s promoted as the only full-size reproduction of Sir Clive Sinclair’s famous black machine, in reality it’s actually a tricked-out Bluetooth keyboard that requires a companion app – available now on iOS and coming soon to Android – to function as a Spectrum.

Away from the app, the device serves as a Bluetooth keyboard that you can pair with your smart device or computer. 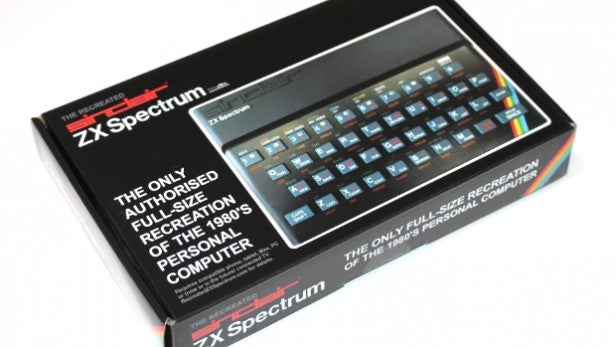 To the untrained eye the Recreated ZX Spectrum is virtually indistinguishable from the real thing. It has the same rubber-touch keys, the raised Sinclair logo and that iconic rainbow pattern on the bottom right corner of the keyboard. It’s only when you look around the back of the machine that you realise this is a very different beast to the home micro you spent so many hours on back in your tender and misspent youth.

Instead of the traditional inputs and outputs you have a micro-USB socket for power and charging AA batteries (more on this in a bit), a “pair” button to establish the Bluetooth link between the unit and your phone or tablet and a switch to toggle between the game and keyboard modes.

On the underside of the unit there’s a battery compartment which, when you take it out of the box, is empty. The Recreated ZX Spectrum doesn’t come with its own rechargeable AA batteries so you’ll need to source some yourself, but it does offer the ability to charge said batteries using the aforementioned micro-USB port. You can also use standard, non-rechargeable AA batteries, but the bottom of the device warns against plugging in the USB cable at the same time. 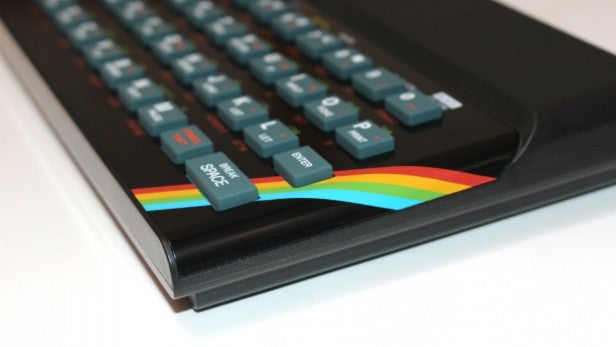 On its own, the Recreated ZX Spectrum is only capable of serving as a Bluetooth keyboard and an admittedly cool-looking one at that. To truly unlock the machine’s full potential you need to download and install the companion application from the applicable app store. This app comes pre-loaded with a selection of games which manufacturer Elite has managed to negotiate distribution rights for, and includes classics such as Chuckie Egg, Saboteur, Turbo Esprit and Buggy Boy.

The selection of games currently available should stir some feelings of nostalgia among fans and show newcomers why the machine was such a big deal back in the ’80s, but if you crave more then you’ll have to reach for your wallet. The Recreated ZX Spectrum application dangles other well-known games such as Jet Set Willy, Manic Miner, Uridium and Nebulous in your face but these can only be obtained via in-app purchases.

Each is priced at a very reasonable 79p, but when compared to the rival ZX Spectrum Vega – another attempt to revive the brand which has Sir Clive’s blessing – it all seems a bit tight-fisted, especially when you consider the somewhat steep £99 price tag of the system and need for additional hardware. The Vega – while lacking the rights to classics like Manic Miner and Chuckie Egg – comes with 1000 different games pre-loaded, and has the capability to accept more via SD card.

The Recreated ZX Spectrum app is currently only available for iOS users, but Elite is working on the Android version as we speak and even promises connectivity to Google’s Chromecast in the future, which means you’ll be able to link directly to your TV set.

The app is easy to navigate and comes packed with information not only on the games, but on the history of the Spectrum brand. From the app you can adjust various settings, such as locking the screen in landscape mode or taking off the pixel filter to ensure the in-game visuals look authentically sharp and blocky.

The software library is divided into two sections – one for free games and the other for those that must be unlocked via an in-app transaction. You can also view a hand quick-launch menu which reduced the time taken to boot up a game – something that Spectrum fans will no doubt appreciate after all those hours of waiting for games to load from cassette tapes back in the ’80s. 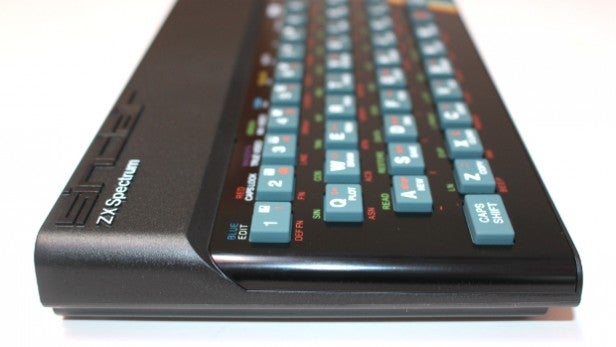 Given the vintage nature of the Spectrum hardware it should come as no surprise to learn that the emulation is faultless. Everything looks and sounds like it should, and the moments of slowdown are purely intentional, as they replicate the often patchy performance you would get on the real thing. One thing we did notice was that when playing on an iPhone the image is stretched in landscape mode, and there’s currently no option to adjust this. On the iPad – which has a 4:3 ratio screen and is therefore closer to the ratio you’ll remember on your old CRT TV set in the 1980s – this isn’t such an issue, however.

Two control methods are offered when using the Recreated ZX Spectrum with the companion app. The standard controls replicate the experience down to every single key press, and as a result you’ll have to do your research as every single game seems to have a different combination of inputs. Thankfully Elite has included what it is calling i-Dapative controls, which simplifies things by sticking to the same keys across all games, making it a bit easier for novices. Veterans whose muscle memory can still vividly recall the keyboard layout for Chuckie Egg will no doubt opt for the standard setting, of course.

Those old enough to have used a Spectrum previously should come away impressed by the way this device functions. It genuinely feels like you’re playing the real thing. Although the app can be used without the Recreated ZX Spectrum via on-screen keys, there is simply no substitute for physical inputs, especially when it comes to classic platforms such as this.

In this regard, the Recreated ZX Spectrum hold a clear advantage over its rival the Spectrum Vega, which doesn’t come equipped with the full QWERTY button setup and therefore lacks that all-important degree of authenticity. The trade-off is that the Vega is able to operate indefinitely from any other device, which Elite’s offering cannot do. 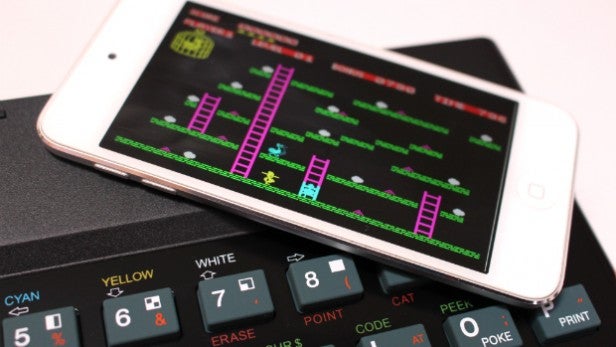 Should I buy the Recreated ZX Spectrum?

The Recreated ZX Spectrum absolutely nails what was arguably its most difficult task – faithfully replicating that classic Speccy experience. From a purely physical standpoint it’s a complete and utter success, aping the legendary machine in both look and feel. The fact that it can also operate as a standard Bluetooth keyboard is a bonus, and it’s a feature we’ve already found ourselves using more often than we expected.

By pairing the device with a companion app – and not going for the “all in” approach of the rival ZX Spectrum Vega – Elite has arguably presented a barrier for many prospective buyers. However, there are benefits to this approach. Elite can update the app and improve functionality, and by pairing with smart devices it’s possible to gain modern benefits, such as HD output a television sets. That’s something the Vega – with its fuzzy composite connection – cannot offer. Also, it’s unlikely that any person looking to purchase this device won’t have access to a smartphone or tablet already.

Ultimately, the biggest challenge Elite is going to have moving forward is populating the companion app with games. It is currently working hard on securing licenses for classic Spectrum titles and hopes to have “a couple of hundred” well-known games available by 2016. However, there will be some games which, due to the vaguarities of copyright ownership over the past three decades, may never see the light of day on the Recreated ZX Spectrum. There’s bound to be a few personal must-have titles that every Spectrum fan will want to get their hands on the moment they buy a machine like this, and the fact that some could be out of reach forever is going to present a problem for Elite. 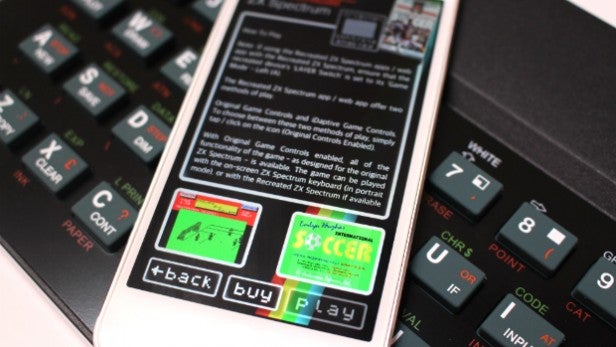 Elite has, to its credit, stated that it is working hard to ensure all of the most requested Spectrum titles will be available for download. Trying to broker deals with publishers and developers from many years ago is likely to be a tricky prospect, and it remains to be seen if it can bring enough games to the Recreated ZX Spectrum to make it a truly worthwhile purchase. The Vega ships with 1000 games – not all classics, admittedly – and offers the ability to load ROMs onto the device using an SD card. Elite’s offering can’t do that, but it does at least ensure that the creators of these games get some kind of financial reward for making their titles available. Dropping ROMs onto the Vega might seem like the easy choice, but it’s a pretty unethical way of growing the machine’s library.

Hardcore fans will of course overlook such concerns and will rightly be bowled over by the incredible attention to detail that Elite has put into accurately cloning the classic system. If you consider yourself to be a fan of Clive Sinclair’s classic home micro then you’ve probably already made up your mind, but even those who didn’t join in with the revolution – or perhaps weren’t even born in the 1980s – will find this thoroughly intriguing venture worth their time and money.

It’s not without its shortcomings and the high cost being perhaps the most notable, but the Recreated ZX Spectrum offers a wonderful trip down memory lane for fans of the system. All it needs now is more software