On paper the ZenPad 8.0s 8-inch, IPS, 1,280 x 800 display isn’t anything special, even by budget tablet standards. Other affordable tablets, such as the £100 Hudl 2, feature Full HD displays that are noticeably sharper than the ZenPad 8.0’s.

However, considering its price the ZenPad 8.0’s screen is hardly a deal breaker and is more than usable. Text and icons are sharp enough to remain legible, and we never found ourselves squinting to read text. Brightness levels, while far from dazzling, are also fairly good – though like 99% of the tablets we test, the screen will become barely usable when hit with direct sunlight. 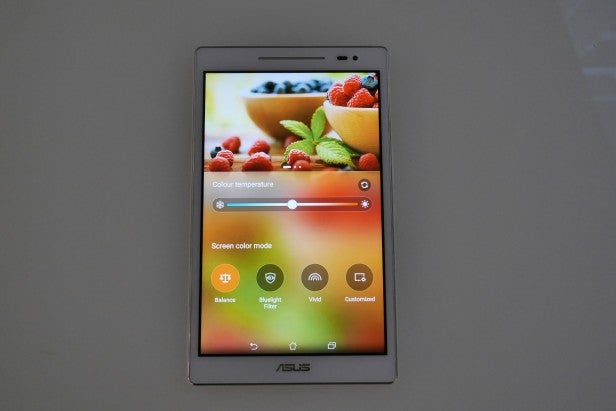 Asus has also done a reasonable job calibrating the ZenPad 8.0’s screen. Colours on the display are nicely vibrant, without being oversaturated, and in general the colours are faithful to real life. Whites look good, too. For example, standing the ZenPad 8.0 next to the Hudl 2, whites on the Tesco tablet looked slightly dirty and had a yellow tinge.

The only slight issue we noticed with the screen’s colour settings is that ZenPad 8.0’s began to take on a blue hue when viewed from even a moderate angle. It’s a tolerable issue on a cheap tablet, but it’s another way the ZenPad falls a little short of ideal.

The display controls are one of many additions Asus has made to the ZenPad 8.0’s software.

The ZenPad 8.0 runs using Android 5.0.2 Lollipop overlaid with Asus custom ZenUI skin. It’s no secret, We’re not huge fans of Android skins for two key reasons. First, because in general the skins don’t do much to improve Android and make needless changes to the operating system’s user interface.

Second, because the skins radically delay how quickly devices can be upgraded to new versions of Android. This is because the company, in this case Asus, has to tweak the skins custom code to work with the new Android version – a process that can take weeks, if not months.

While our first issue with skins remains true on ZenUI, in general the changes Asus has made to Android’s user interface aren’t outright bad and some of the custom services border on being useful. Key positives include the additions of Asus’ ZenMotion and Autostart Manager services.

ZenMotion is an optional service that lets users add custom gesture and motion commands to the ZenPad 8.0. For example, it lets users put the tablet to sleep by double tapping the ZenPad 8.0’s screen, or take a screenshot when the shake it. 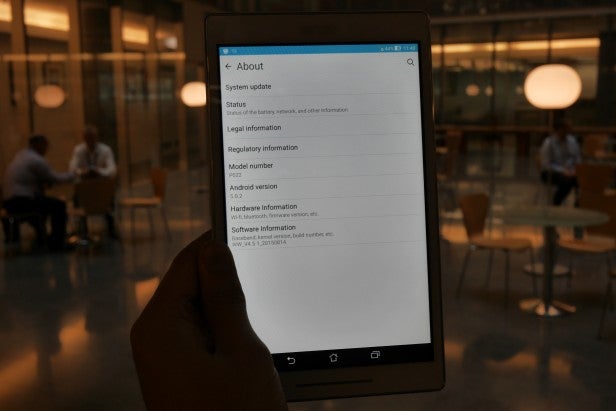 While the features aren’t revolutionary, after a few days with the ZenPad I did find myself using the controls – particularly the double tap sleep command.

The Auto-start Manager is a useful feature that lets you approve which applications can launch and run in the background when you turn the ZenPad 8.0 on.

While this sounds small, when you consider the fact the ZenPad 8.0 only has 1GB of RAM, the feature is very useful, and makes it easy to control which apps are eating up the tablet’s precious memory.

Sadly even with the addition of the app manager, the ZenPad 8.0 still has some performance issues.

Powered by a quad-core Intel Atom X3 CPU, ARM Mali-450 GPU and 1GB of RAM the ZenPad’s specs aren’t anything to write home about when compared to more expensive tablets, but they are reasonable when you consider its price.

The X3 was unveiled in March and is the least powerful Atom processor in Intel’s current mobile line-up and places affordability above performance. Even with this in mind, the tablet should be more than powerful enough for basic things, like web browsing and streaming video.

The majority of the time we found this is the case and generally the ZenPad runs fairly smoothly. However, after a few days with the ZenPad 8.0, it developed a number of niggling performance issues. For example, at least two or three times a day, the tablet would inexplicably stall and stop recognising commands for no clear reason. This was particularly annoying when typing messages or playing games.

In one incident when updating a spreadsheet, the ZenPad 8.0 stopped recognising my commands for a good five seconds. Adding insult to injury, it then suddenly responded and enacted every command given it during its downtime – which included manic attempts to spur the tablet back to life and left the spreadsheet is a state of disarray that took more than a couple of minutes to fix.

Because the ZenPad is one of the first tablets to run using Intel’s new Atom chip, we’re not sure if the performance issues are due to the tablet’s hardware or software. Either way the ZenPad 8.0’s benchmarks are equally disappointing, even when judged by budget tablet standards.