The Yoga Book C930 is a clear step forward on the first-generation model. It features better specifications and a nifty new e-Ink keyboard/secondary display that has oodles of potential. But sadly software bugs and a ridiculously high asking price stop it from being the iPad Pro-killer we've been waiting for.

The Yoga Book C930 is the second generation of Lenovo’s awesome-sounding, but slightly awkward, convertible tablet-come-laptop. The multi-function e-Ink display makes it one of the more interesting convertible devices around.

For those that missed it, the original Yoga Book was a nifty take on the convertible form factor currently dominated by the Apple iPad Pro and Microsoft Surface Go. It mixed things up by replacing the traditional keyboard docking system seen on its rivals with a new design that bolted a graphics tablet keyboard to the screen using a 360-degree hinge. This in theory made it an amazing choice for students and avid note takers. Sadly, software bugs and underpowered hardware stopped the first-gen Yoga Book being the killer convertible we’d hoped for.

One generation on though, I was super excited to see Lenovo upgrade the Yoga Book C930’s hardware to address the original’s performance woes and replace the graphics tablet section with a new e-Ink display. The change sounds small, but it could make the new device perfect for reading as well as note taking and an ideal choice for regular travellers.

After three weeks using it, I can confirm the combo makes the Yoga Book C930 feel like a massive step forward on the original. It’s high price and ongoing teething pains with the touch keyboard stop it being the iPad Pro killer we’ve been waiting for, however. 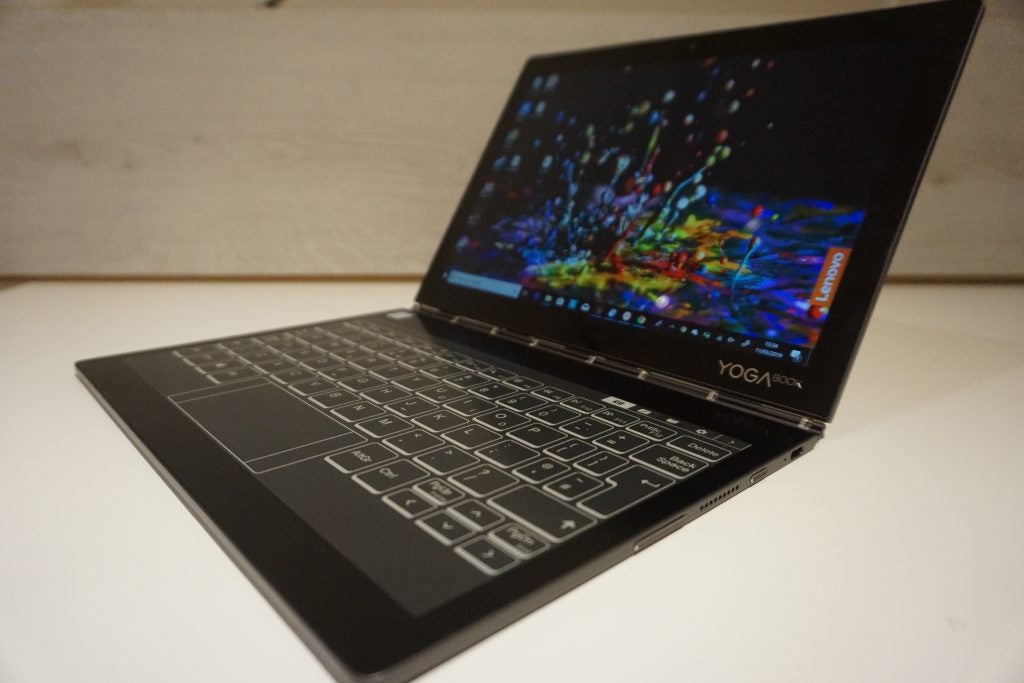 The Yoga Book C930 looks a lot like past Yoga-series devices. It has the same metal chassis, 360 watchband hinge design and is similarly sized to its predecessor, measuring in at around 9mm thick. This isn’t a bad thing. The metal design’s suitably robust and the device is compact enough that it easily fits into most satchels hassle free. The 10.8-inch form factor also mean it’s comfortable to hold and use as an e-reader or tablet when folded.

By tablet standards the two USB-C ports are generous, but comparing it to other Windows devices, the lack of connectivity is limiting. If you want to use this as a work laptop and connect it to an external monitor you’ll have to invest in a dongle. The inability to store a stylus within the device is also a pain. Over the last three weeks with the Yoga Book C930 I’ve regularly forgotten to pack the pen, leaving me without it for an entire workday.

Design-wise, the only big difference is the new keyboard-replacing secondary screen, which boasts a 1080p e-Ink display. This new addition gives the C930 a big step up on the original Yoga Book’s graphics tablet, especially since it can now double up as a Kindle replacement when you set it in tablet mode. This will be ideal for frequent travellers, so you don’t need to pack multiple devices in your cramped rucksack.

What’s even more exciting is the ease of which you can now doodle and scribble down notes. Being able to see what I was working on made the device feel significantly more portable and with the addition of Lenovo’s MyScript software, I was able to easily crop photos, scribble notes on PDFs, and edit documents using the Wacom-powered digital pen.

The experience was further aided by the new screen’s slightly textured finish, which gives the feeling of drawing on paper. Taking notes during press sessions and interviews on the Yoga Book C930’s e-Ink screen was a significantly more comfortable and intuitive writing experience than it was on the iPad Pro and Surface Go. 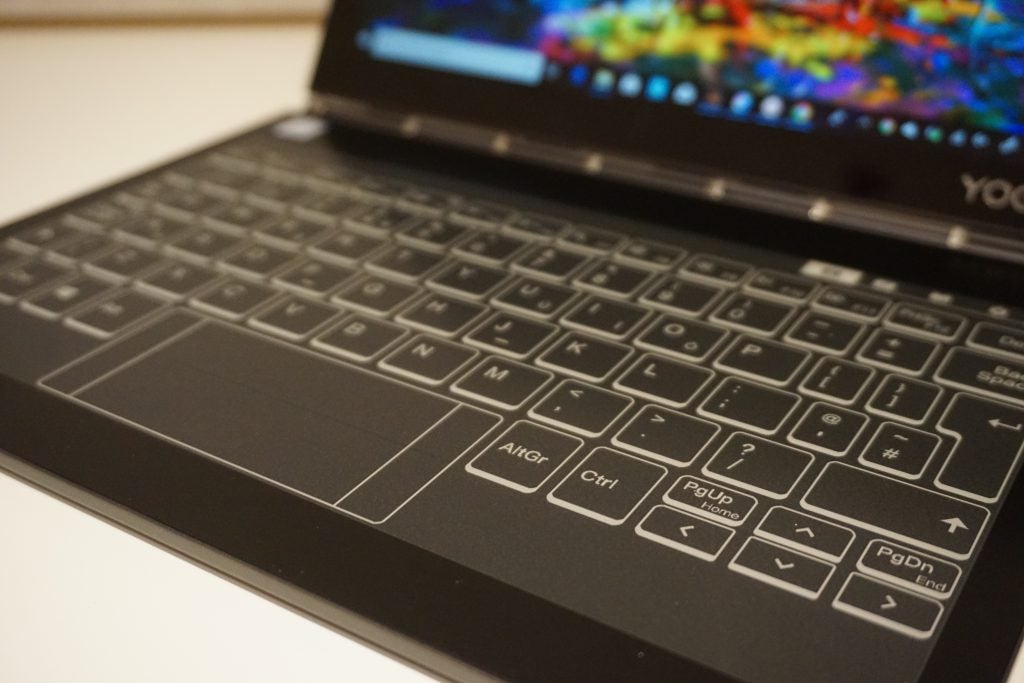 Lenovo’s also worked to improve the Yoga Book C930’s typing experience, which was a major weakness of the first gen model considering you’re hitting simulated buttons instead of physical keys.

Improvements to AI mean that it should be better at autocorrecting and spotting mistypes. Updates have also been made to improve haptic and audio feedback when you hit a key, while you can now pick between over 160 different keyboard layouts.

With real world use it is a definite step forward. A useful animation shows when a key press has been registered and I’ve had no issue typing articles on the Yoga Book C930 – at least when the software works. The system is still very buggy, so this can’t always be guaranteed. The keyboard regularly freezes, particularly when you attempt to switch between notation and typing modes. On more than one occasion I’ve had to reset the entire system to get the e-Ink keyboard working again.

The 10-inch form factor is also an minor annoyance, albeit one you’ll experience on the iPad Pro and pretty much any other small-form-factor convertible. The keys feel a little squished and it’ll take you a good while to get used to the dimensions.

The main screen has had a spruce. Lenovo has boosted the 10.8-inch to have a higher 2560 x 1600 resolution and raised the max brightness to a remarkable 400 nits.This is significantly more vibrant and pleasant to use than the original Yoga Book (2017), which had a lower res 1080p screen and 360 nits max brightness. The compact dimensions and resolution ensure icons and look uniformerly sharp, so you’ll struggle to spot individual pixels.

To the naked eye colours and contrast levels are more than good enough for basic tasks and streaming video. Cracking out our trusty colorimeter I found the screen is generally pretty good and mirrored my initial impressions.

The 7543K colour temperature is a little ways off the 6500K ideal, meaning some colours can look a little cooler than they should. But the 0.0.5 nits black level is excellent and means dark scenes look suitably atmospheric while streaming. The 362 nit maximum brightness isn’t anywhere near HDR levels, but it ensures the device remains legible in everything but direct, bright sunlight.

The figures aren’t the highest I’ve seen but for an uncalibrated screen they’re well above average. The slightly lower Adobe coverage is also more than forgivable as I can’t seen any photographer or artists doing serious work on a device the Yoga Book’s size. 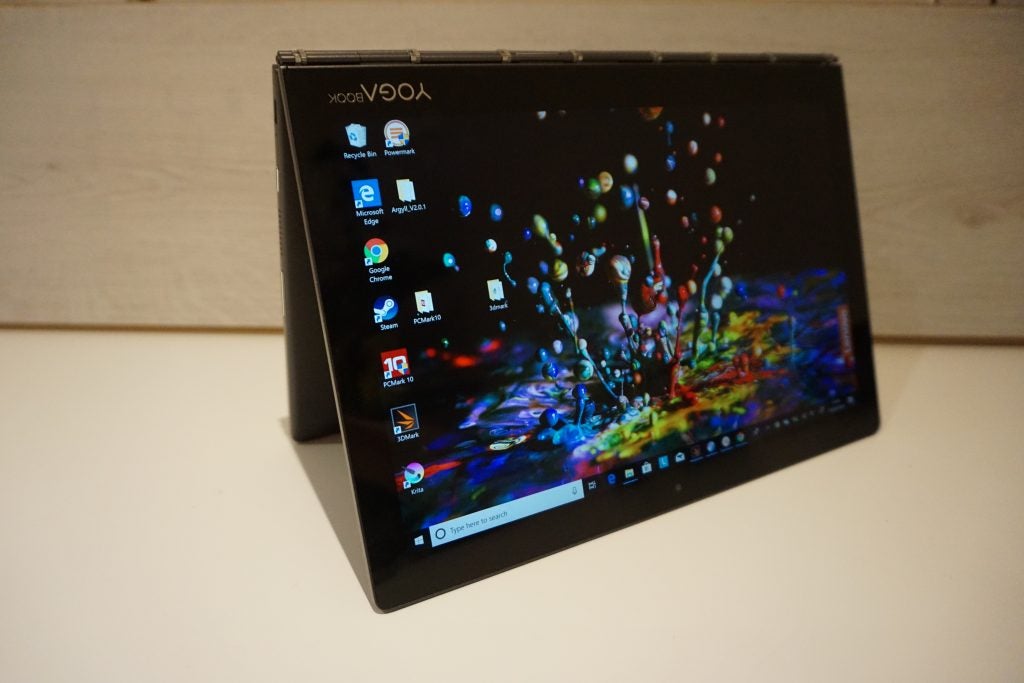 Performance has seen the biggest improvement of all on the Yoga Book C930. Lenovo has updated the Yoga Book C930’s CPU to feature the newer, more powerful Intel Core i5-7Y54 and Core m3-7Y30 options. Elsewhere, the specs remain largely the same, with RAM topping out at 4GB and storage at 256GB.

These specs should ensure the Core i5 version I tested is capable of moderately sized digital painting and photo editing projects. This is a big deal as the original Yoga Book’s underpowered Atom CPU was a key issue, particularly on the Windows 10 version.

With real world use this means – keyboard bugs aside – the Yoga Book works just fine for most basic tasks. It deals with multi-tab web browsing, medium-sized photo editing and digital painting projects just fine and is more than nippy enough for office work.

3D gaming is completely beyond it. This isn’t surprising given the specs, but it does limit the Yoga Book C930’s appeal for people that want an entertainment device, like the iPad Pro, which is significantly more developed in this area thanks to its iOS software and diverse app ecosystem.

The Yoga Book C930’s synthetic benchmark scores mirrored my real world findings. You can see how it performed during Trusted Reviews’ standard suite of tests below.

While this is great and a definitive step forward on the original Atom-powered Yoga Book, if performance is your primary concern you can do better for the money. The base M3 version of the Yoga Book costs a staggering £1099.99 and the i5 version I tested an even heftier £1299.99. You could get a Dell XPS 13 with better specs or a top of the line iPad Pro with all the trimmings for less.

The Yoga Book C930 offers OK but not amazing battery life when the laptop/tablet screen is used. I managed to get a full work day out of it while using it as my main work machine for web browsing, word processing and lightweight photo cropping and editing.

However, running it through our standard battery burn, which involves looping 5 minutes of video and 10 minutes of web browsing in the Powermark benchmark with the screen brightness set to 150 nits and the e-Ink on, the Yoga Book only lasted 6 hours and 12 minutes. Whacking it into tablet mode with the e-Ink off, battery life increased by about 45 minutes. These are good scores for a laptop with the Yoga Book C930’s specs, but slightly disappointing for a tablet. They’re also well below the quote 10 battery life quoted by Lenovo.

With just the e-Ink active Lenovo claims the tablet will last up to 13 hours off a single charge. There’s no battery benchmark for e-Ink screens so I didn’t get a chance to get a firm, scientific figure, but my real world impressions suggest the e-Ink only battery life is somewhere in that ballpark. Considering you can only use the e-Ink mode for scribbling and reading though, this figure isn’t too impressive. 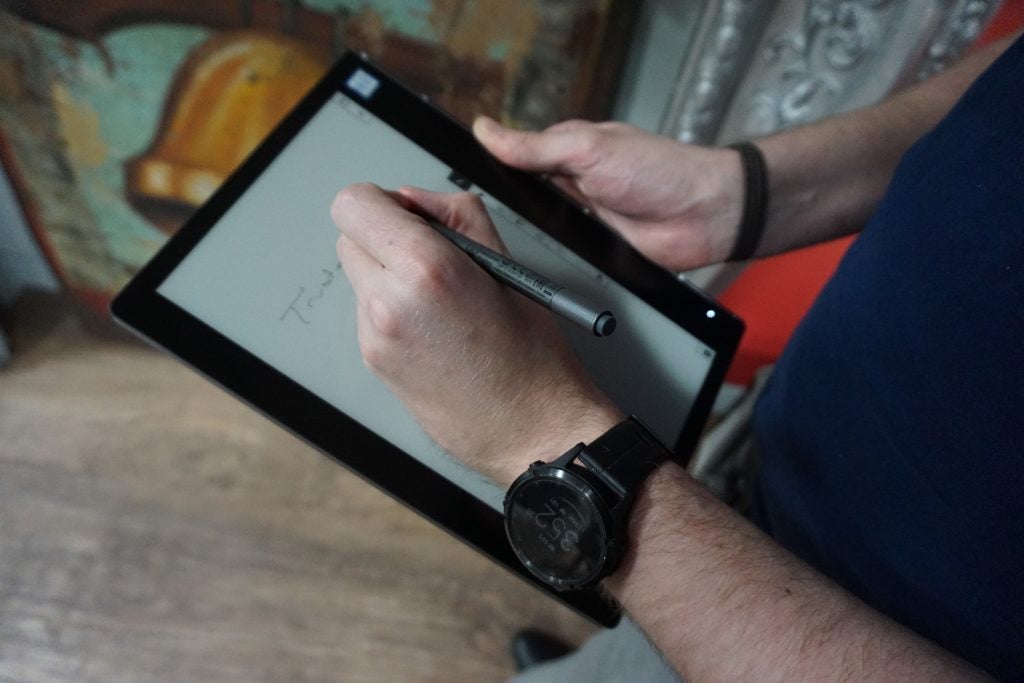 If you’re a regular person looking for a Windows-flavoured alternative to the iPad Pro, then no you really shouldn’t buy the Yoga Book C930. The device is extortionately expensive and features lower specifications than its arch rival.

What you’re paying for is a cutting edge, unique design that feels more like a proof of concept than a finished product. If that’s enough to tempt you then there is plenty to like about the Yoga Book C930. If not you’ll likely be better off going for an iPad Pro or Microsoft Surface Pro, which offer better specs and value for money.

The new e-Ink second display and keyboard have serious potential. If Lenovo can iron out some bugs and reduce the upfront cost, this could be a winning combo on the third generation Yoga Book.

The Yoga Book C930 is a great step forward, but it still feels like a proof of concept rather than a finished product.