In Japan, Yo-Kai Watch is a firmly established phenomenon, right up there with the Monster Hunters and the Pokémons in terms of mass-appeal. And while this sequel comes a little late to these shores, three years after the Japanese release and six months after the US launch, the timing’s ripe for it to break the mainstream.

In the wake of Pokémon Sun and Moon and Pokémon Go, there’s an appetite for charming, monster-collecting adventures. If that’s what you’re after, Yo-Kai Watch 2 is an absolute cracker.

In the style of Pokémon it’s being released in two different editions – Fleshy Souls and Bony Spirits – with a slightly different line-up of Yo-Kai between them. These, in case you don’t know, are the stars of the game – mischievous spirits normally invisible to mortal eyes, but able to be seen and captured by those lucky enough to own the titular wearable. Spotting and befriending Yo-Kai will win you their medal, enabling them to add them to your collection and an ever-growing army you can call into your six-strong squad to battle for you.

So far, so Pokémon, but those who’ve grown to know and love the original Yo-Kai Watch will understand that it’s something else: a fun-focused, child-friendly RPG grounded in Japanese folklore and the minutiae of everyday, small-town life.

Your hero or heroine wanders around the streets, parks and public buildings, using the watch to detect, meet and often battle Yo-Kai, while solving the problems of the local populace, often caused by the Yo-Kais’ cheeky ways. If they’re not taking what doesn’t belong to them, they’re ‘inspiriting’ people to behave against their better natures. 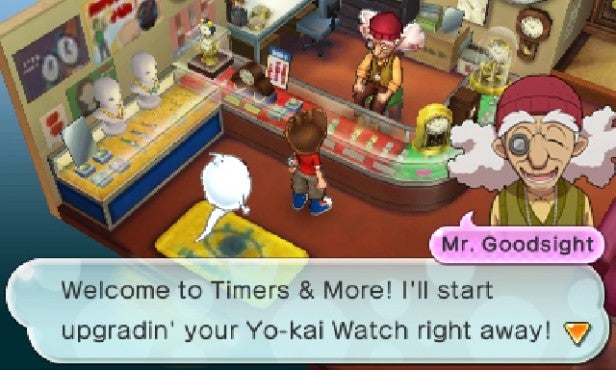 But while the first Yo-Kai Watch sometimes felt like a selection of loosely linked episodes pulled together, the sequel feels more plot driven. Sure, in the early stages it’s a bit of a retread, repeating themes and settings from the original and even risking a little déjà vu as you pull your core band of Yo-Kai back together.

With time, though, it grows more expansive, taking you beyond your hometown’s districts to other towns, rural areas and even a trip back in time. There’s space to settle disputes between warring clans of Yo-Kai, explore a little family history and put a new bunch of wicked Yo-Kai in their place.

In fact, there’s time to do an awful lot more than that, as Yo-Kai Watch 2 throws in modes and side missions galore. Your Yo-Kai still gain experience and level-up during combat, but you can also combine them with specific materials to help them evolve into new forms. You can also transform your less-favourite Yo-Kai medals into gems to augment your star battlers, though you’ll need to hunt the critters down again if you don’t want to lose them from your line-up.

There are new missions where you have to find the perfect spirit to haunt a certain spot, not to mention missions that have you hunting criminal Yo-Kai and bringing them to justice. And that’s without the optional missions that see you searching for historical objects or fishing in lovely rustic streams. 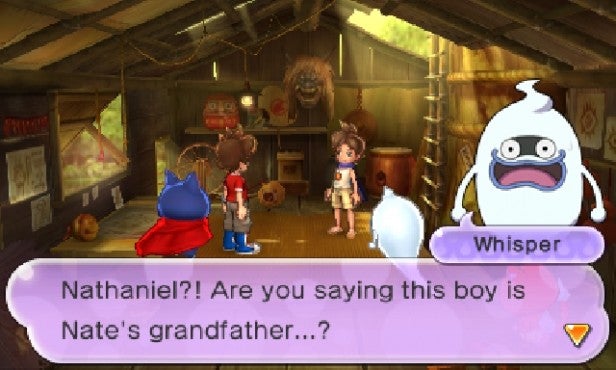 True, there are an awful lot of fetch quests, but Yo-Kai Watch 2 has a way of dishing them out with a dash of eccentricity and quirky charm, while the map and quest log do a great job of keeping even younger players (and their easily confused parents) on the right track.

Combat might be a different matter – at least at first. In Yo-Kai Watch you’re not so much a commander, assigning your spirits to targets and picking their attacks, as a sort of coach, creating an effective six-strong line-up with three active at any one time.

Your Yo-Kai are arranged on a wheel, which you can spin to choose who’s fighting and who’s recovering, and placement turns out to be crucial. Not only can sympathetic Yo-Kai boost each other’s abilities when placed adjacently, but it makes sense to have a mix of heavy-hitters and supporting, healing Yo-Kai active at all times.

What’s more, each Yo-Kai has an attitude, which will affect how aggressively or defensively they fight. You can change these using the books you’ll pick up on your journey, but it’s important to keep a balance between the different types. 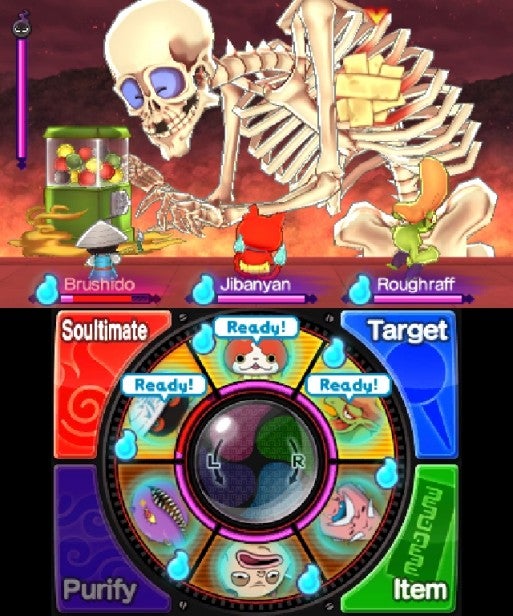 Your active Yo-Kai will fight for themselves, but that doesn’t make combat any kind of passive experience. For a start, you can use the stylus-controlled reticule you use to scan for Yo-Kai to pin their attacks on a target or a weak point – a key technique for the game’s boss battles. Each Yo-Kai also has a special ‘soultimate’ move – usually a heavy or area attack or a healing or defensive buff – which you can activate, subject to a cooldown timer.

These are vitally important, but triggering each one involves a short mini-game, perhaps using the stylus to spin a wheel, trace symbols or stamp out little dots of light. Throw in the need to purify damaged Yo-Kai with a similar set of activities, and fighting in Yo-Kai Watch can be anything but simple. Luckily, it’s also anything but dull.

There are two things that really make Yo-Kai Watch 2 for me. One is the whole tone – gentle, funny and quirky without ever trying too hard. Even more than the original, it has a little of the spirit of a Studio Ghibli classic, contrasting silly or supernatural elements with characters and settings pulled from real life.

This makes it a fantastic game for kids, but also a surprisingly good one for adult gamers, provided you’re happy to meet it halfway. 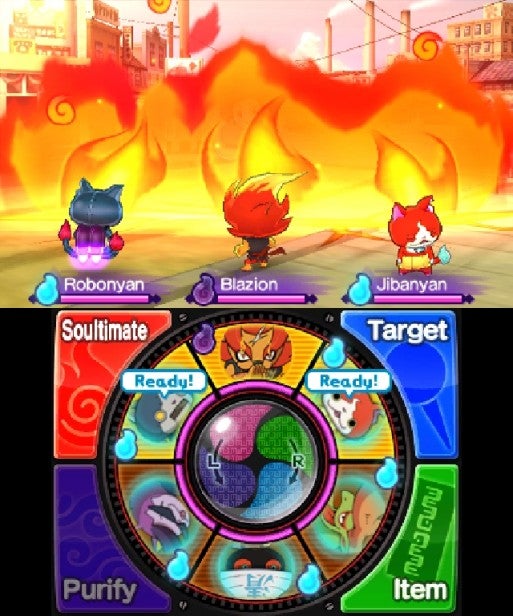 The other thing is the Yo-Kai themselves. True, some might have stepped right out of the Pokémon playbook, but there’s something oddly anarchic at work here. Weird, sweaty, pig-like spirits are joined by mean, scowling rice cakes, walking burgers, be-quiffed rockabilly lizards, peculiar old geezers, large-tongued mushrooms and a whole range of hyper-excitable costumed cats. There’s even one Yo-Kai that appears to be a bum-headed sprite whose special attack involves farts.

This whole attitude makes collecting the Yo-Kai – all 350-plus of ’em – a serious draw.

They’re all drawn with Level 5’s usual flair, and it has to be said that Yo-Kai Watch 2 is one of the best-looking 3DS RPGs around, with really vibrant scenery, great character design and some brilliant use of 3D effects. I’m also a sucker for the game’s upbeat, rocky soundtrack, where the tunes only add to the overall sense of fun.

To add to the appeal, we also get more network features this time around. These kick off with a four-player local dungeon-crawl mode – Yo-Kai Watch Blasters – then continue to online and local trading and battling modes, including one that has you as a member of the ‘Bonies’ or ‘Fleshies’ armies battling it out for supremacy on the streets.

Yo-Kai Watch 2 still suffers from some of the flaws of the original – it can feel lightweight and repetitive and the complex mechanics aren’t always well explained – and while it’s fixed the huge difficulty spikes of the first game, it might be too unchallenging for some.

Yet that’s part and parcel of what makes it so good for younger gamers, not to mention oldies who don’t fancy a Dark Souls-scale challenge all the time. You could see it as the gaming equivalent of comfort food or a feel-good movie – somewhere you can chill out and take the load off when you just need an escape.

Yo-Kai Watch 2 is the best kind of sequel – one that takes what worked in the first game, irons out the wrinkles and expands the frontiers in all the right directions. It might sound like a Pokémon clone, but it’s actually a big, immersive adventure with some great ideas of its own.

The style, humour and relaxed difficulty level will make it a perfect RPG for younger players, but don’t dismiss it even if you like your JRPGs dark and deadly serious. You never know, Yo-Kai Watch 2 might be exactly what you need.