Pokémon Sun and Moon are landmark releases for the series. Not only do they see the most significant changes since Red and Blue, but I’d argue they’re the greatest entries since those games made their debuts back in the late 90s. Given the huge success of Pokémon Go, it’s perfect timing.

In many respects, Sun and Moon feel like the brilliant culmination of years of streamlining mechanics and presentation. Sometimes the tweaks venture a little towards the overly simplistic, but when the end result is so polished it’s hard to complain.

Within the first few moments of starting this new entry of Pokémon I discover things are very different in the land of catch-em-all. For starters, the game takes place in the Alola region, across four islands in total. This new area is pretty much an allegory of Hawaii, where every inhabitant exhibits a wonderfully relaxed attitude that creates a nice sense of calm across your adventure. 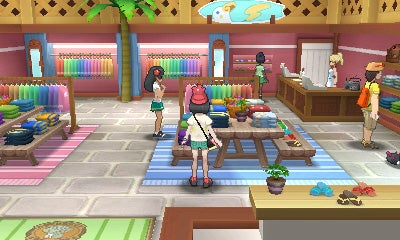 The laid-back attitude of the Alolans is epitomised by the new Pokémon Professor, Kukui, who doesn’t even wear a shirt under his lab coat. I’ve never been a fan of Professor Kukui. The chest on display was his first offence, but then within five minutes of being introduced to him he’s walking into my family home without even being invited in. Big faux pas, matey. I’m glad that other people within the game are picking up on his casual attire, as by the time I reach the second island, one of the “Kahunas” – Pokémon  Sun and Moon’s new version of gym leaders – says to Kukui as your boat pulls ashore: “still haven’t found a shirt to match that coat, huh?”

These cute jokes run all throughout Sun and Moon to the point where at first I wondered at first if they were wonderful translation mishaps, but it’s soon clear it’s just great writing. The jokes are acceptable for children, but hilarious for adults, which makes for memorable moments 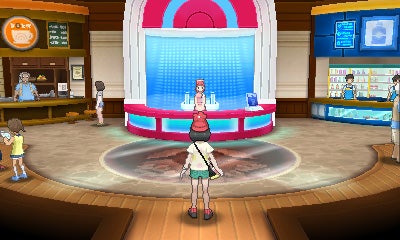 There were so many examples throughout the game I had to take pictures on my phone. On one route I ran into a trainer battle with a bell boy, this is what he said to me verbatim: “You don’t need to ring my bell to get my attention. If we make eye contact, I’ll come.” Suddenly, it’s Saturday night and I’m watching Take Me Out.

The visuals are equally impressive. Colours look sharper, Pokémon look the best they ever have (even on 3DS XL, although be prepared for sharper jaggies) and the new presentation style makes the journey feel like a truly epic adventure. The gradual move away from the top-down perspective has worked wonders for the series, as exploration feels much improved, and allows for swooping camera angles that gradually reveal new locations to the player with panning views of gorgeous locations.

New Pokémon that come with each entry can often prove divisive. Thankfully, the entries this time around are the best they’ve been in many years, primarily because they feel like they’ve been inspired by Red and Blue. Aside from the odd crazy exception that’s as bad as Klefki (I’m looking at you, Comfey), many have brilliant design and have some excellent new abilities which really vary up the combat. Some, in fact, are so adorable I genuinely felt bad at times beating the snot out of them in random battles. I can’t reveal which ones thanks to embargoes, but some are simply the cutest.

On the subject of battles, while on the surface it can be very simplistic, the more you battle, the more layers reveal themselves to you. A new feature which has been added means that, once you’ve battled a Pokémon once, all its strengths and weaknesses to every type are detailed for you in your own Pokémon’s move list in the bottom screen. 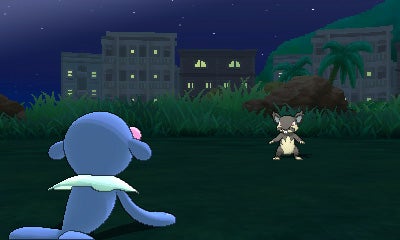 Handy as this sounds, it’s arguably the biggest flaw in the new game, as it takes away one of the most fun learning experiences of the series. I used to love learning how to overcome some of the more obscure types of Pokémon, like Dragon and Ghost, but now everything is known after the first encounter.

Taking away that mystery makes the main story feel a little by-the-numbers and lack challenge for series veterans, but there’s still plenty to sink your teeth into thanks to the brilliant new Battle Royal mode. 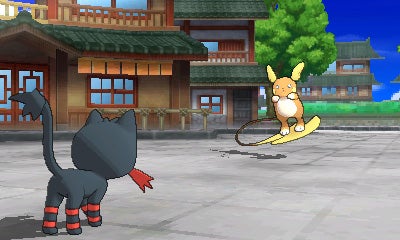 Battle Royal sees four players (they can be AI opponents or you can battle other players in local or online multiplayer) choose three Pokémon to take place in a battle. Each player summons one Pokémon at a time and all four fight each other at once. It’s utter carnage but with a huge amount of strategy involved.

Analysing the strengths and weaknesses of the three other Pokémon in play against your own, and how much health each has (wins are determined by how many Pokémon you eliminate from battle with fights ending after one trainer has lost all three of their combatants) provides some of the most thrilling competition I’ve enjoyed in the series.

The only issue with Battle Royal is that the game’s performance takes a massive dip when four Pokémon are duking it out on-screen. These framerate drops happen more frequently than in previous games where two-on-two battles were the only serious offender, which is a shame, but thanks to the slow-paced, turn-based combat it never really becomes an issue, more an inconvenience.

At first I feared that Pokémon had dumbed itself down with the “Poke-splaining” of type weaknesses, but seeing modes such as Battle Royal showed me how much depth there is to this near-two decade-old combat system.

Pokémon Sun and Moon prove that with steady innovation an old dog can certainly learn new tricks. The developers should be applauded for being consistently brave in making changes to the series that appease both newcomers and series veterans alike.

With so many new things to do as well as a whole new journey to embark upon, this is an excellent entry and one that no fan should miss.