Introduction
When you can buy a Blu-ray player in your local supermarket for as little as £60, why pay £140 for one? Well, enthusiasts with expensive, demanding displays need a source that can deliver the cleanest, sharpest video signals – and most cheapo players simply don’t cut the mustard. Pricier decks usually offer high-grade video components and rigid build quality, quelling the vibration and interference that can harm picture quality, while superior audio components bring about better music playback.

These are some of the reasons why you might consider buying the BD-S473, Yamaha’s latest entry-level 3D Blu-ray deck. Sure, it lacks the cutting-edge features of mainstream rivals like Samsung, Sony and Panasonic, but with a £140 price tag you’d expect its build quality and performance to be a cut above the budget throngs – particularly from a company as well-versed in the electronic arts as Yamaha.

Yamaha BD-S473 Review – Design and Connections
If you covered up the logo on the front, you’d still know this was a Yamaha player. The all-black finish and clean, straight lines are a dead giveaway, likewise the round buttons and their recognisable symbols. It’s a lovely looking and well-built player – slim and sleek, with a firm aluminium casing and chunky fascia that’s slightly wider than the rest of its body. 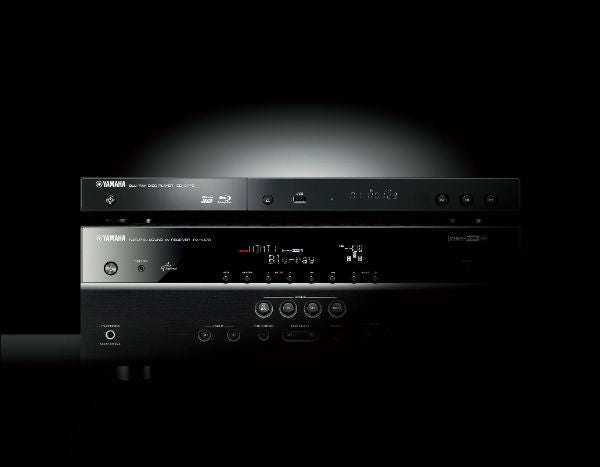 On the front is a small but legible LED display panel, a USB port and a flap on the left-hand side that drops down when the disc tray opens. On the right side are three buttons: play, pause and stop. If you’re pairing it with a Yamaha receiver they’ll go together beautifully.

The rear panel is less populated than we expected for the money. It comprises just three sockets – a 3D-ready HDMI v1.4 out, Ethernet and a second USB port. Yamaha clearly presumes that most people have 3D-ready receivers by now and feels no need to add a second HDMI output, but the lack of analogue stereo, digital output or multichannel analogue outputs will deter those hoping to use the BD-S473 as their main music source.

Yamaha BD-S473 – Features
The BD-S473 is not overloaded with features, lacking the things we’ve come to accept as normal in the Blu-ray player market. The biggest omission is built-in Wi-Fi, which makes it harder to access the deck’s network functionality than we’re used to. There’s no compatible USB dongle either, which leaves Ethernet as the only way of getting online – a much messier method.

However, Yamaha has thrown in a few bits and pieces to stop it feeling completely vanilla. Yamaha doesn’t have its own online content portal a la Samsung’s
Smart Hub or Panasonic’s
Viera Connect, but it has included YouTube Leanback. This version of YouTube boasts large, simplified displays and options to search for videos, explore different channels, log in to your account or peruse featured videos. 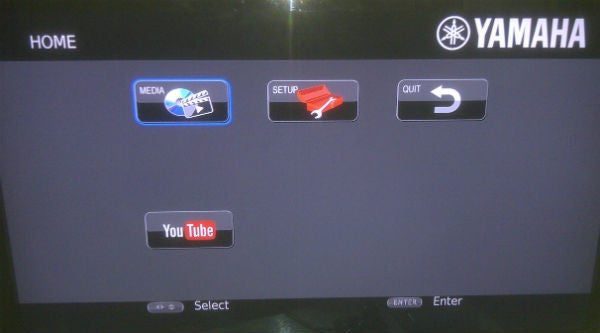 The deck is also DLNA certified, which means you can stream media from compatible servers on your home network. Alternatively you can play files from a USB flash drive. The deck lacks built-in memory for BD Live use, but with two USB ports you can leave one drive in the back for BD Live and use the front port for media playback.

The list of compatible formats is healthy. On the music side, it plays MP3, WMA, AAC, WAV and FLAC, while supported video formats include AVCHD, MKV, MPEG PS/TS, MPEG-4, VOB, AVI, ASF and WMV. You can also bore relatives with your holiday snaps in JPEG, GIF or PNG. We loaded up a USB stick filled with media files and it happily played the lot of them.

Let’s not forget that the BD-S473 is 3D ready and does all the other thankless stuff you’d expect of a Blu-ray deck. That includes upscaling DVDs to 1080p, decoding Dolby True HD and DTS HD Master Audio and turning them into multichannel PCM for receivers that can’t decode them, and preserving the native 1080/24p frame rate of Blu-ray movies.

Yamaha BD-S473 – Operation
Operating the BD-S473 is a generally smooth experience. A settings wizard appears on first boot-up, allowing you to set onscreen language, resolution and aspect ratio. Onscreen displays are easy on the eye – the classy splashscreen shows the inside of a grand piano, while the Home menu places Media, Setup, Quit and YouTube icons over a simple grey background. It’s all a bit sparse and basic compared with Samsung and LG’s dashboards, but it’s responsive and easy to follow. 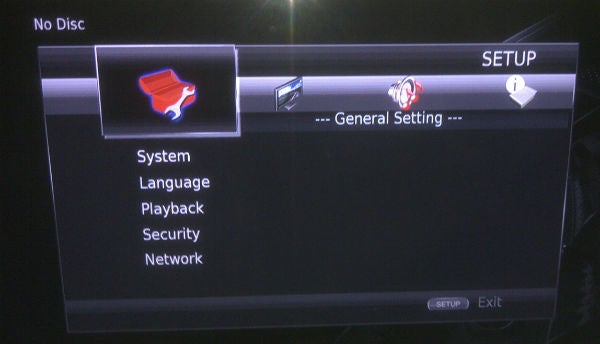 The setup menu is reminiscent of Toshiba’s Blu-ray players, using full colour icons for each section along the top, with the corresponding options in the box below. The similarities continue with the Video Process menu, which allows you to select a picture preset (Standard, Vivid, Cinema or Custom), as well as apply noise reduction and select the deinterlacing mode.

Select the Custom preset and you can adjust brightness, saturation, hue, contrast and colour transient improvement (CTI), as well as adjusting the brightness, saturation and hue for the red, green, blue, yellow and cyan parts of the picture. That’s quite a level of detail, although the settings should be used judiciously to avoid clashing with your TV settings.

Next a word on the remote, which gets narrower at the bottom and therefore slots in the hand snugly. The button layout is fine, with the large multi-direction pad helpfully placed right the middle, while the playback keys are coloured white to help them stand out.

On the downside, most of the buttons are too small and the Home button gets lost among them. If you don’t like the remote, you can download an app for the iPhone, iPad or Android devices that lets you control the player over a network, but this requires a firmware update.

Yamaha BD-S473 – Performance
Its missing features and onscreen simplicity can’t disguise the fact that the BD-S473 is an impressive hi-def performer. Charlie and the Chocolate Factory on Blu-ray is a wonderful disc, bursting with vivid colours and gorgeous detail – all of which the Yamaha displays with aplomb.

The colour palette is incredibly bold and vibrant, nowhere more so than inside the Chocolate Room, where strong yet natural greens meet blazing reds and shocking purples. But perhaps more importantly, the deck displays hues with wonderful subtlety where needed. Wonka’s baby-smooth skin is deftly accentuated by shadows that blend into each other seamlessly.

And then we come to detail. The BD-S473 picks out every pixel with searing clarity. Pockmarked skin, fabric textures (Veruca Salt’s fur coat in particular) and CG background detail appears lucid and punchy, which makes for a mesmerising watch. Also impressive is how it keeps this detail looking crisp and stable even as the camera swoops and objects dart round the screen.

Blacks are solid, but the Yamaha has the contrast dexterity to pick out detail within dark objects. That helps gloomy scenes stay sharp, not just a mass of ill-defined murk.

Switch to 3D and the Yamaha serves up more of these sharp, spellbinding images. We watched Thor on a Samsung UE55ES8000 TV and the opening shots of Asgard – with its dramatic scenery and ornate buildings – are imbued with a wonderful sense of depth, without compromising on clarity or stability. As the camera moves into the hall during Thor’s coronation, you really get a sense of space and distance, plus the gathered crowds are sharply resolved.

The BD-S473 keeps its cool with more demanding discs too. Only one of the tests on Silicon Optix’s HQV Blu-ray proved problematic, with some light pulsing on the Film Resolution SMPTE pattern and some flickering on the pan across the stadium. But the jaggies and video resolution tests are expertly handled.

DVDs scrub up nicely when converted to 1080p and well-encoded YouTube videos look terrific, with the sort of low-level noise that won’t affect your enjoyment.

The Yamaha also passes muster as a CD player, delivering a clean, open and agile sound. Some may hope for a little more musical detail, others will crave greater transparency, but for day-to-day music playback you could do a lot worse.

Verdict
Let’s not beat about the bush – there are lots of players on the market that offer better value for money than the BD-S473. Decks like the LG BP420, Panasonic DMP-BDT220 and Samsung BD-E6100 are equipped with slick online apps, glitzy operating systems and built-in Wi-Fi.

By contrast, Yamaha’s deck isn’t wireless, offers sparse connectivity and with just YouTube on board, it falls some way short of its big-name rivals in the Smart content stakes. That’s not great for the money.

But the BD-S473 regains ground with its excellent picture and sound performance, while media format support via DLNA and USB is wide ranging and build quality is solid. Ultimately though, the BD-S473 is only really likely to appeal to owners of Yamaha receivers who want a player to match.