If you’re looking for a reasonably priced Blu-ray player with 3D support that also gives you access to on-demand services like BBC iPlayer, LoveFilm and Netflix, but can live without Wi-Fi support, then the LG BP420 will tick all your boxes. You can currently buy it online for around £110, which makes it £20 cheaper than LG’s Wi-Fi-equipped BP620, the next model up from this one in LG’s current line up of Blu-ray players.

Design
As the LG BP420 is essentially a budget Blu-ray deck, it’s not as pretty to look at as high-end models such as Panasonic’s slick DMP-BDT500. But that’s not to say this is an ugly player. Far from it, as the slim line design – it stands just 41mm tall – and the glossy black finish on the front make it a neat little package to behold. It does feel quite light when you pick it up and the transport buttons on the front right do look a little bit cheap, but other than that the build quality actually seems to be quite good. 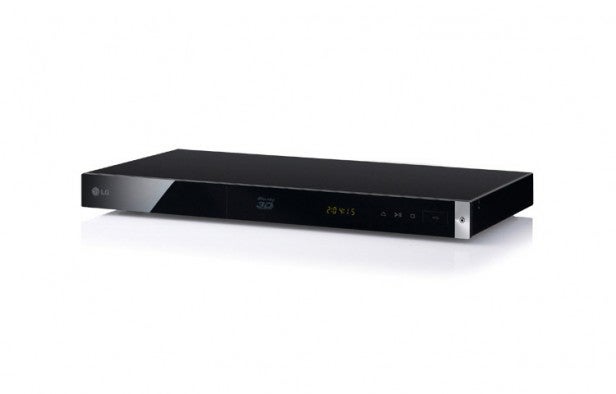 The tray mechanism is hidden behind a flip down flap on the left hand side of the deck, which automatically opens and closes as the tray is ejected and retracted, and next to this the player makes do with a basic five character VFD display.

There’s only one USB port, which is mounted on the front behind a small plastic pull out flap. Placing it here has made it easy to get at, but having a USB memory key or hard drive cable sticking out the front does ruin the player’s clean lines somewhat. Also, as this model has no built-in memory, you need to have a memory key plugged into whenever you want to access BD-Live content, so many people will simply be left with a memory key constantly inserted.

Connections
Around the back of the LG BP420, the line up of connections is pretty basic, which is perhaps unsurprisingly given its low price. Along with the HDMI port, there’s just a composite video output, a pair of phono connectors for analogue audio and an optical digital audio connector to feed audio to older surround sound amps that lack HDMI inputs. For the Smart TV and media streaming features there’s an Ethernet port so you can hook the deck up to your router. 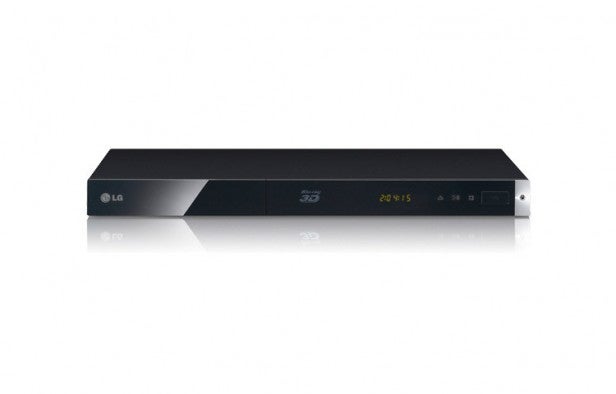 Once you have the player fully set up, the first thing that strikes you when you turn it on is just how slick and welcoming the user interface is. It’s built around a home page that uses a movie soundstage complete with overhead lights as its backdrop. Splashed across the middle of this are large icons to take you to the player’s key features, while on the bottom there’s a shortcut banner that you can use for adding quick links to Smart TV apps.

The first three icons on the LG BP420’s central navigation bar are links to the movie, photo and music functions. What’s interesting about this is that when you select one of them, it brings you to a sub menu that lists all your media sources. So if you select Movie, for example, the first option in the list is to play a Blu-ray disc, but this menu also includes the USB port as a source, as well as any DLNA servers that the player has found on your network. It’s a similar story when you select the photo and music options, as you can select optical discs, USB drivers or network servers as the source for the content you want to play. 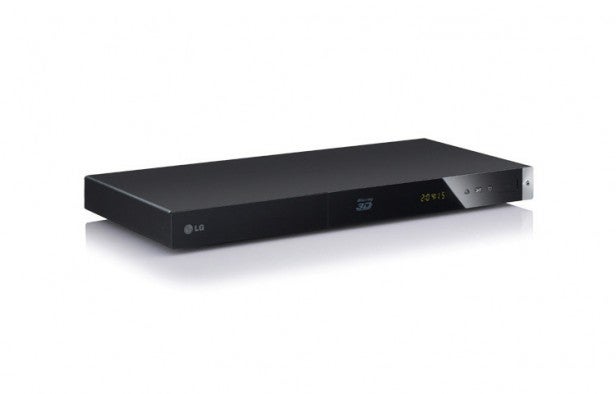 Unlike the Smart TV platform on LG’s latest TVs, the version used here doesn’t include a Plex client, so although you can use the Plex server software on your PC with it, the BP420 doesn’t show poster art or plot summaries when you’re browsing through your movie files. Nevertheless, it works well with normal DLNA servers, and its format support is generally pretty good as it will play the DivX, Xvid, MP4, WMV and MKV formats. On the music front MP3, WMA and WAV files are supported for streaming, and it’ll play FLAC files from USB drives, but not via DLNA servers.  When it comes to images, it shows JPEG, PNG and GIF files at resolutions of up to 4,000 x 3,000 pixels.

Streaming playback quality is very good, even when it’s working with HD video files. However, like the LG BP620, the player is quite sluggish to navigate through libraries of files. As it can take several seconds just to open a folder, this does become annoying.

Smart TV apps
The range of supported Smart TV apps is impressive. As with its TVs, LG has split the apps provided here into two categories that are accessed via different menus. The must have apps appear in the Premium menu. Here you’ll find BBC iPlayer, along with both Netflix and LoveFilm. Other notable additions include the Acetrax and Box Office 365 movie rental services, Picassa, Facebook and Accuweather. 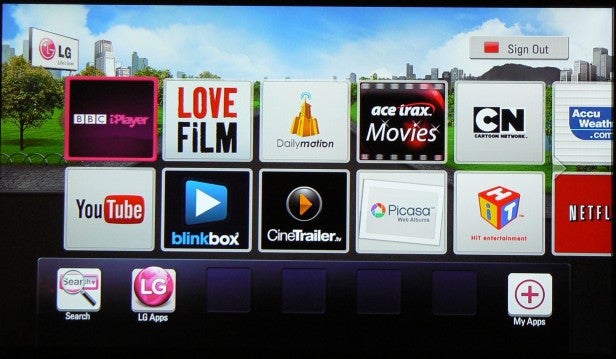 In the secondary LG Apps menu you’ll find a ragtag bunch of other applications that are less essential, including simple games, some magazine content, along with various news and information services. There are a couple of decent apps in here, such as the one for Find a Property and the DriveCast app, which lets you access stuff in your Dropbox account from the player. Overall, between the Premium and LG Apps menus you’ll find a pretty broad selection of apps, with only really Twitter the notable absence.

However, there are a couple of slight issues. Firstly the player can feel a little bit sluggish to use for the Smart TV apps. Apps can be slow to open and at times the LG BP420 can feel a little bit unresponsive once apps are running. The other annoyance is that although LG has added a shortcut bar to the home screen, bizarrely you can only add apps from the second tier LG Apps store to this bar. You can’t add any of the apps from the premium section. This is hugely annoying as it would be a great option to quickly access the likes of iPlayer, LoveFilm and Netflix from here.

On the picture front the player performs well for a model at this price point. LG allows you to tweak the player’s picture setting, but we found it best to just leave it on the standard mode and use your TVs picture controls to make any necessary adjustments, as that gave more accurate results. The deck deals well with subtle textures and delivers warm colours and natural skin tones. It also handles contrast and shadow detail with ease and produces a good sense of depth when working with 3D discs. For the most part motion is handled pretty well, but a small bit of blur and judder does creep in every now and again, so it’s not up there with the very best on this front. 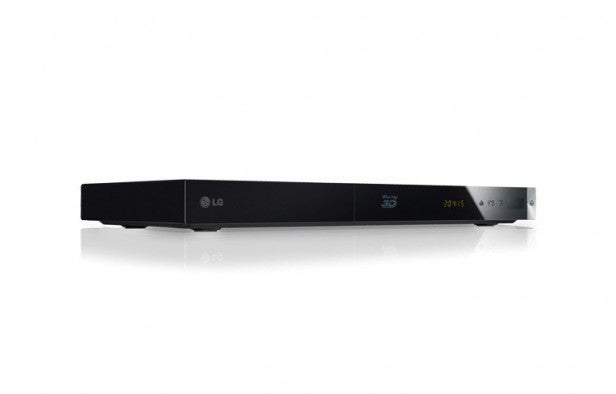 Taking just 7 seconds to spring into life from standby mode, it’s pretty speedy to start up and its performance when loading discs isn’t bad either. Faced with X-Men Origins – a tricky BD Live title – it took one minute and two seconds to go from the pulling in the tray to arriving at the menu screen.

Verdict
The LG BP420 has a very friendly user interface and offers up strong picture quality for both 2D and 3D movies, while also including an impressive range of Smart TV apps and good digital media support. It lacks the extra lick of speed that would have made the smart apps and streaming more satisfying to use, but overall it’s a good deck for the money.