If you’re after a standalone Blu-ray player that delivers stylish looks, smart features and solid picture quality for a low price, then Samsung is usually a good place to start. Decks like last year’s Samsung BD-D5500 showed that you don’t have to pay through the nose to get all the latest mod-cons like Wi-Fi, network media streaming and internet content, making them some of the best-value decks of 2011.

This year continues in the same vein. The Samsung BD-E6100 costs somewhere in the region of £130 but plays 3D and comes equipped with most of the smart features found on the BD-E8500 (obviously without all the PVR gubbins). We’ll touch upon those in due course, but for now we’ll examine the deck’s design, which is textbook Samsung.

It’s super slim and designed to slot into AV racks with minimal upheaval, although at 37mm it’s still fatter than the Panasonic DMP-BDT320 (if such things are important to you). As you might expect the finish is jet black, with an circular brushed texture on top. The front panel lacks the lovely touch-sensitive display panel and disc slot of the E8500, instead opting for large physical buttons, a slide-out tray and a clunky green LED display. That’s not unusual on a budget player like this, but it lacks the quality of other Samsung players and we’re not entirely enamoured with the light bodywork.

Connectivity is basic too. On the far right of the front panel is a USB port for media playback from memory devices, digital cameras, card readers and the like, while the back sports HDMI and coaxial digital audio outputs, plus an Ethernet port. With no multichannel analogue outs or second HDMI port, a 3D-capable receiver is a must if you want to enjoy 3D pictures and HD audio simultaneously. Some rivals like the Panasonic DMP-BDT220 offer two USB ports and an SD card slot too, but this is a cheaper player.

It’s on the inside where the Samsung BD-E6100 really excels, with an impressive array of connected features to play around with. Key to this is built-in Wi-Fi, which allows you to get online without the need for a USB adapter. If you don’t have Wi-Fi home broadband you can obviously use the Ethernet port, but it feels so old fashioned these days.

Once connected, hit the Smart Hub button on the remote (or enter via the Home menu) and you step into Samsung’s internet portal where you can explore a wealth of content, including video-on-demand, internet radio stations, social networking, games and puzzles – as well as some new signature services for 2012.

Samsung’s content choice is now better than ever, with crowd-pleasers like BBC iPlayer and Netflix lining up alongside smart stalwarts like YouTube, Picasa and Dailymotion. Social networking is covered by Facebook, Twitter and Google Talk apps, while USA Today, AccuWeather.com and This Day In History are among the more high-brow options.

Samsung Apps is where all available content is stored, using a bold, user-friendly interface – simply select and install the ones you want. BBC iPlayer didn’t appear here during our test but we’re assured that it’ll be there (as it was on the BD-E8500 and HT-E6750W) by the time it’s in shops. Elsewhere you’ll find the Search tool and Your Video features from last year’s range.

You also get three new zones within Smart Hub – Fitness, Family Story and Kids. Described as a ‘unified self-care service’, Fitness is home to a variety of workout videos, as well as tools that track how many calories you’ve burned. Family Story is a simple social networking tool that lets you upload photos for fellow Samsung owners to view – useful for sharing pics with people not on other social network sites, such as elderly relatives.

Finally, Kids gathers together a bunch of games, cartoons and puzzles to keep the sprogs entertained, presented in suitably loud and bubbly menus. Much of the content in these zones can be installed through the regular Smart Hub interface, but this is a more convenient way of accessing them – plus the bright and breezy graphical menus is a lot more fun.

If Samsung’s selection doesn’t suffice, you can cast your (inter)net wider and use the built-in browser, but we wouldn’t recommend it, even if you use a wireless USB mouse or keyboard. The arrow cursor is painfully slow to move around the screen when using the ‘pointer browsing’ method, but switching to ‘link browsing’ – where it jumps from link to link without having to move the cursor – is equally cumbersome. It’s so sluggish and clumsy that we guarantee you’ll give up and get the laptop out.

Elsewhere, the deck is DLNA certified and can stream media content from PCs and other devices on your network. You can also access files stored on a PC from a smartphone, using the Samsung as a renderer. The BD-E6100 isn’t necessarily dependent on you having Wi-Fi router coverage either – it supports Wi-Fi Direct, allowing you to create a peer-to-peer network. But when the deck is connected to a router, the Soft AP (Software enabled Access Point) feature allows other devices to connect to the same network through the Samsung.

When playing media over a network or from USB devices, the range of supported formats is excellent. On the video side, it handles AVI, MKV, MP4, ASF 3GP, VRO, VOB, PS and TS containers, plus DivX, XviD, MPEG-4, WMV, MPEG-2 and MPEG-1 codecs. It’ll also play MP3, WMA, FLAC and JPEG.

Content is now easier to find too, thanks to the tweaked AllShare feature, now dubbed AllShare Play. This gathers together all content found on USB devices and the network into a single place, listing the types of content on the left and connected devices on the right.

Last but not least the deck can pipe frame sequential Full HD 3D images to a compatible TV over its HDMI v1.4 connection. There are no manual image tweaks as found on Panasonic’s players but you can enter the size of your TV for the optimal picture.

After the quick and painless boot-up, the Samsung BD-E6100 checks all the crucial settings, including wireless network setup and a software update check, which took around 20 minutes to complete. Thanks to the attractive, straightforward onscreen menus this process feels quick and easy, although the subsequent barrage of further software updates being pushed our way got a little annoying – hopefully they’ll have settled down by the time the deck is widely available.

The menu system is superb. Your starting point is the attractive Home menu, which uses large animated icons for Smart Hub, AllShare Play and Settings. The bright colour palette and clarity of the graphics (now in proper HD) makes them a joy to navigate, and that goes for the other key menus. It’s not as intuitive as Panasonic’s latest GUI but it’s hard not to be impressed by it.

Disc loading is relatively fast, firing up the tricky Terminator Salvation disc in 40 seconds flat (from pressing Close to the first video appearing), and its picture quality is excellent. Next we switched to the spectacular 3D images of Panasonic’s promotional Avatar Blu-ray, which the Samsung passes to our UE55D8000 TV with aplomb. It’s a comfortable, natural watch but with loads of detail and good colour depth.

The amazing ‘First Sortie’ chapter looks gorgeous, from shots of creatures flying alongside the helicopter – rendered with emphatic clarity and no smearing – to shots of the chopper touching down within the forest. With the latter, the pictures are hypnotically deep and beautifully composed, stretching back into the distance with little crosstalk to spoil the show. As the scene progresses, flapping ferns in the foreground and tree branches poke at the camera convincingly. 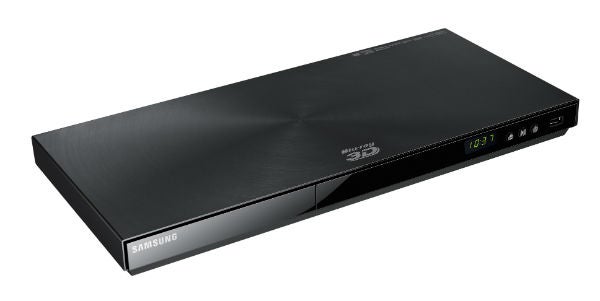 Get back to basics with 2D and you get more of the same sparkling picture quality. The image is crystal clear and drenched in deep, natural colours. Shading is subtle where required and shadow detail during darker scenes is clear, ensuring you don’t miss out on the action.

It also handles most of the torture tests on the Silicon Optix HQV disc competently, although there’s some strobing on the evil Film Resolution Loss pattern and we’ve seen the camera pan across Raymond James stadium looking smoother. But on the whole there’s some sound video processing at work here.

Elsewhere we had no trouble playing multimedia files over a network or USB. Hi-def MKV files containing 1080p video look fabulous, video streamed via Wi-Fi from Netflix is consistently smooth and sharp, while the deck does a passable job as a CD player.

Verdict
The Samsung BD-E6100 is a marvellous Blu-ray player, offering shed loads of must-have features – not least the improved Smart Hub portal, with new services likely to appeal to families and fitness fanatics alike. As ever its multimedia support over DLNA or USB is second to none and it’s controlled using a slick, friendly operating system. More importantly it delivers dazzling 3D and 2D pictures.

The only issues are the slow web browser, sparse connections and design, which lacks the solidity and frills of other Samsung decks. But these aren’t issues that should scupper the deal, particularly when you take the alluring price tag into account – making this a great-value deck that gives the Panasonic DMP-BDT220 a run for its money.