The Xiaomi Mi Body Composition Scale is an attractive scale that fits neatly into any bathroom.

What is the Xiaomi Mi Body Composition Scale?

Xiaomi has carved out a name for itself producing budget-friendly gadgets from everything from fitness trackers like the Xiaomi Mi Band 3, to smartphones like the Xiaomi Mi 8 Pro. Following in the same footsteps, the Mi Body Composition Scale is the Chinese company’s feature-packed but budget-friendly bathroom scales that can read everything from your body fat percentage, bone mass and, of course, your weight.

Unfortunately, while it packs in a lot of tricks, some of these readings aren’t the most accurate. Still, as a way to gauge your body composition over time, these readings can still prove useful, making the Mi Body Composition Scale an attractive addition to both your bathroom and your fitness regime.

The Mi Body Composition Scale has an attractive, minimalist design. I much prefer its styling to that of the Nokia Body and Fitbit Aria smart scales.

The top is a tempered glass with an anti-slip finish that feels soft and pleasant under your feet. The anti-slip finish has the bonus effect of not getting as dirty and dusty as the glass surface of the Nokia Body I also regularly use. At 20mm in thickness, it’s also nice and svelte. 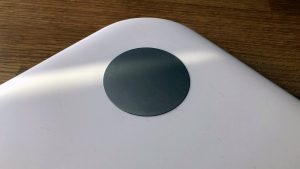 The otherwise all-white design is only interrupted by a subtle Mi in the centre and four circular silver pads, which the scale uses to send an electrical signal used for its bio-impedence readings used for body fat analysis.

There’s a discreet LED display hidden away towards the top that only turns on when you step on the scales. It has auto-brightness to adapt to your room, which is handy.

The display is only set up to display your weight, so you don’t get any other useful information such as the weather update you get from a Nokia/Withings scale. You’ll also have to consult the app to see the tertiary body composition data. 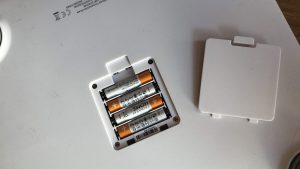 Flip the scale over and you’ll find a battery compartment where you’ll need to insert 4 x AAA batteries for power.

It’s worth paying attention to the disclaimer in the box when first using the scale. It says that the first few readings might be inaccurate, and this was certainly the case.

The first three times I used the scale, it added 10kg to my known weight. It takes a few uses for the scale to calibrate itself, after which it started giving me readings in line with the Nokia Body scale I otherwise use day-to-day. The scale can read to a precision of 50g. 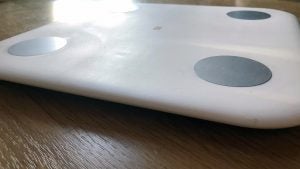 The scale uses bio-impedence analysis to estimate the other body metrics (10 in total). Essentially, this sends a small electrical signal through your feet, and the time to complete a circuit is used to estimate your body’s composition of fat, muscle and bone.

It’s not exactly a perfect measure in terms of an accurate measurement, especially around body fat analysis. Still, provided you can get a consistent measurement, it’s still a good way to monitor your progress if trying to lose body fat. 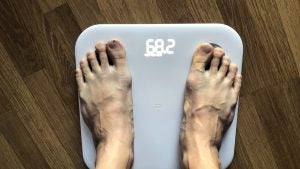 While the scale again managed to get my body fat percentage wrong, measuring 19.5% (I’m around 13% in my currently heavier acquiring Christmas mass state), it at least did this consistently so I know that if I make positive changes these will get picked up. 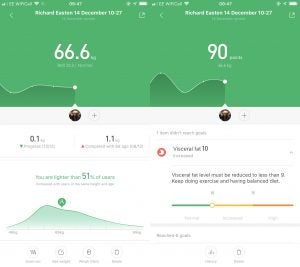 All of this data is synced over Bluetooth to the companion Mi Fit app, where you input your data such as gender, age and height. The readings are then used alongside these to calculate other metrics including BMI, muscle mass, visceral fat, body water and basal metabolic rate. 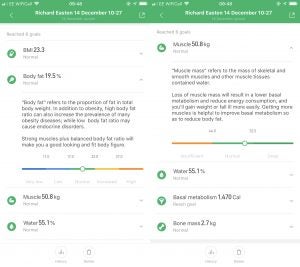 It would have been nice if at least the body fat percentage reading could be shown directly on the scale, rather than having to whip out the app.

Should I buy the Xiaomi Mi Body Composition Scale? 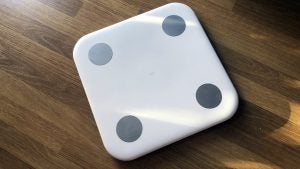 If you’re looking for a smart connected scale, the Xiaomi Mi Body Composition Scale is great value. Even if you ignored all of the additional bio-impedence-based data, it’s an attractive addition.

While some of those extra data points might not be the most accurate in of themselves, they’re still a useful metric to measure overall progress. If you really cared about an exact body fat percentage reading, you’re better off looking away from bio-impedence scales anyway. So these are all a nice bonus.

The only minor complain is the reliance on the app to see any data beyond your weight. It’s a small complaint considering the price.

The Xiaomi Mi Body Composition Scale is fantastic value, packing in lots of features into an attractive design.