The Xiaomi Mi Band 3 may only deliver the bare essentials but it offers them up in a fuss-free manner. A great choice for those looking for a budget-friendly option provided accuracy isn't a top concern.

What is the Xiaomi Mi Band 3?

This being a Xiaomi product, it shouldn’t come as any surprise that the Mi Band 3 hits a budget price point. At around £26 it’s half the cost of Fitbit’s current entry-level Fitbit Flex 2 but does a whole lot more. It might pack in more features than most at this price point, but it doesn’t necessarily do them all particularly well and its accuracy isn’t the best.

Still, if you’re not looking to spend much and only have basic needs, you might well still find the Mi Band 3 checks many of the right boxes.

The Mi Band 3 has a largely no-frills design. The actual tracker itself is pill-shaped and plasticky, housing a 0.78-inch OLED touchscreen display, below which sits a circular capacitive touch panel used for navigating through menus. I’m quite fond of this little touch panel; it lets you interact by tapping and holding, and provides a little haptic vibration, too.

The touch and swipe gestures on the screen itself are a little more hit and miss, however. Occasionally it takes more than one swipe to get it to register. By swiping up and down you can scroll through the different screens, like one that shows your step progress for the day, your heart rate, the weather and your notifications. The display is generally bright enough to read, but on particularly sunny days outdoors it can be trickier. There are a few different watch faces you can toggle between directly from the device too. 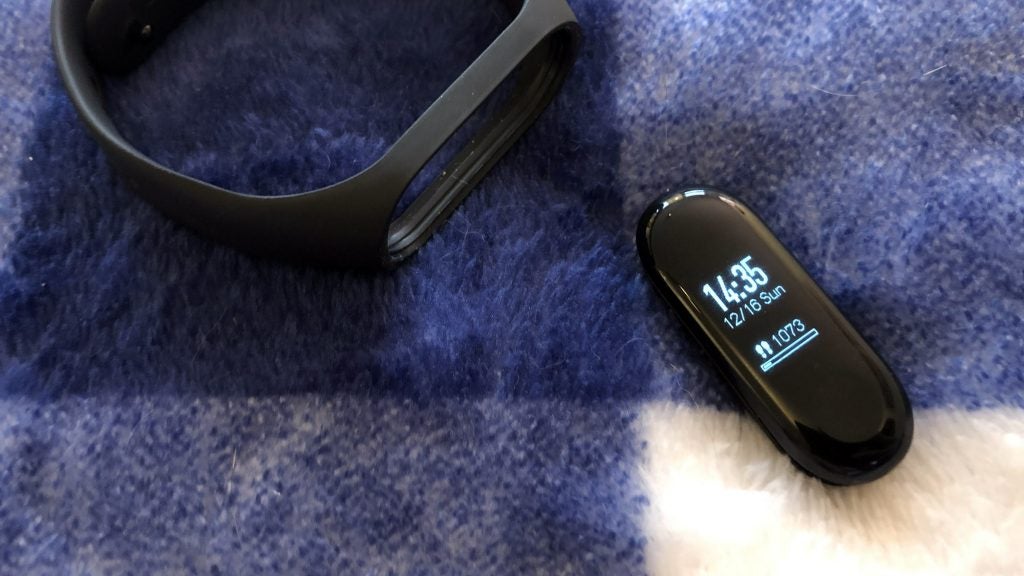 The Mi Band 3’s silicone strap is very basic but the material isn’t the sort that attracts dirt and grubbiness. The band goes through a loop on the other side and is then fastened by a stud, which can be difficult to affix. The loop isn’t the most attractive, either. It’s here the Fitbit Flex 2’s strap looks a lot more discreet.

The 128 x 80 resolution display can also be used to mirror smartphone notifications from the likes of WhatsApp or SMS messages but its vertical orientation and low resolution don’t make these particularly easy to read. It is, at least, functional – letting you know what that last buzz from your phone was. 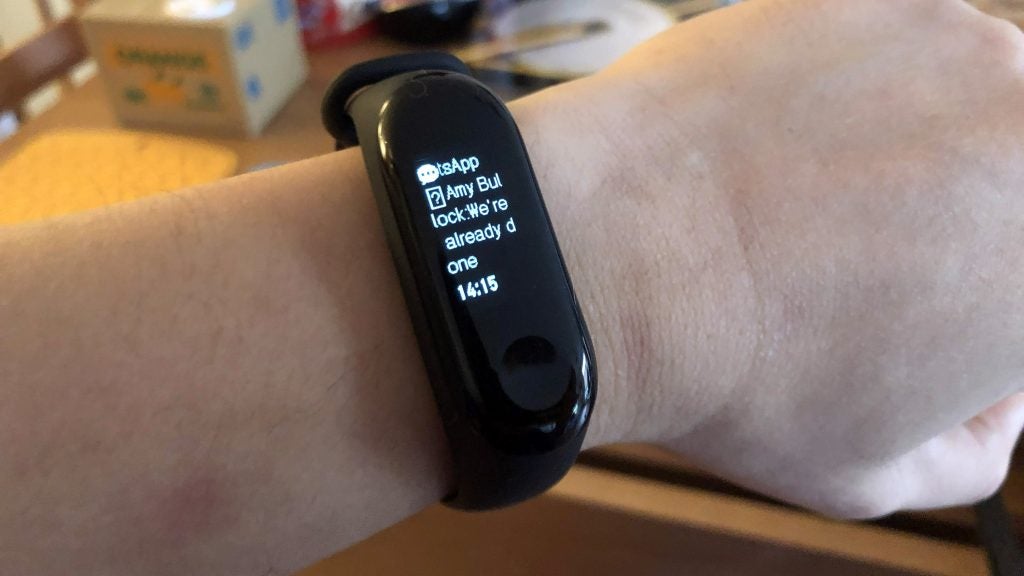 On the back of the Mi Band 3’s body, you’ll find a heart rate monitor but that’s really it as far as sensors go, beyond the accelerometer for step counting. Unsurprisingly, considering the cost, there’s no GPS built in, and there’s also no altimeter. The latter is more of a shame, as it’s what allows most trackers to log elevation when climbing stairs and the like.

Considering the Mi Band 3’s price, it has surprisingly good build quality. Its plastic doesn’t scratch easily and best of all it’s water-resistant to 50 metres. That means you can swim with it and, more importantly, don’t have to worry about taking it off to shower.

The Mi Band 3’s fitness tracking abilities are very basic, in part limited by the lack of the aforementioned sensors. It’ll do the basic step counting you would expect from any fitness tracker, and you do also get move alerts that give you a vibration when you’ve been sedentary too long. You’re able to set your step goal in the companion Mi Fit app for iOS or Android, and getting to your goal will give you an on-screen message.

Generally, the step-counting seemed accurate. Every fitness tracker calculates your steps a little differently, so it’s not uncommon to see different readings. Most important is that a fitness tracker stays consistent, which was the case here.

You also get sleep tracking but this, too, is very basic and nowhere near as in-depth or accurate as the sleep tracking you see from Fitbit or Huawei’s trackers. Your sleep is broken down into Deep, Light and Time Awake overnight but even during night’s where I definitely woke up a few times, my Time Awake registered as 0 minutes.

The duration of my sleep was at least recorded accurately. You get some useful statistics comparing your sleep to your seven-day average, such as falling asleep earlier. You also get comparisons against other people in a similar age bracket.

The heart rate readings from the Mi Band 3 during exercise are also a little suspect. Readings during a run, for example, were often lower than expected by a good 20BPM. Similarly, during a heavy deadlift session, I didn’t get the heart rate spike I was expecting after a lift, with readings coming in about 10BPM lower than what I’ve seen from other heart rate monitors after a similar effort. But then conversely, taking a manual reading after sitting down for a long period could see me with a heart rate of 102BPM, which is higher than expected. Heart rate readings seem to be all over the place. 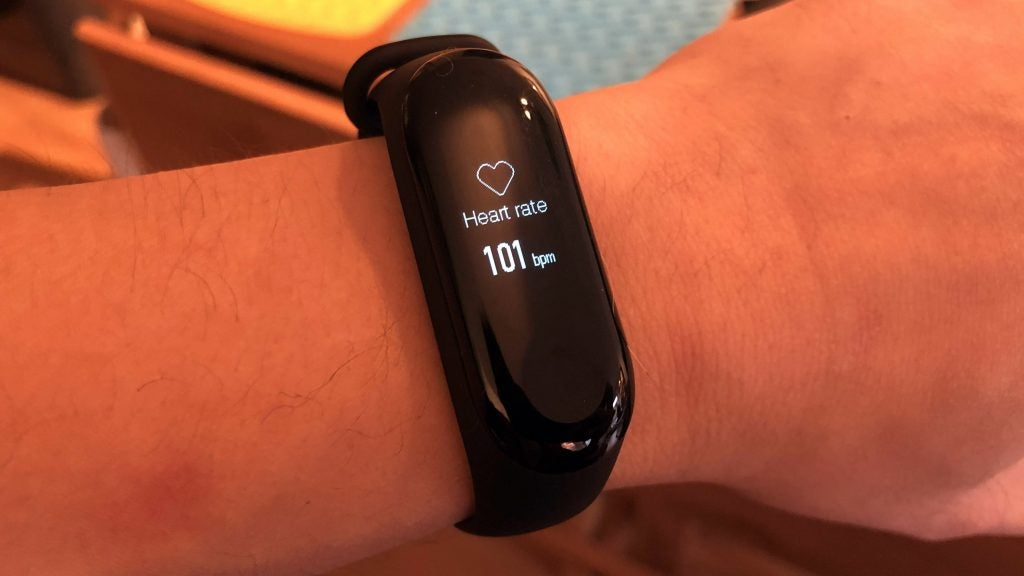 The continuous heart rate reading setting you can turn on at least provided more consistent results, albeit ones that I think are still off. This puts my current resting heart rate at around 57-58BPM, which in all honesty is a little flattering based on my current cardiovascular condition. Other tests I’ve done on other devices have put me in the more standard 65BPM range. In the end, I can’t put much trust in the accuracy of the Mi Band 3’s heart rate sensor. 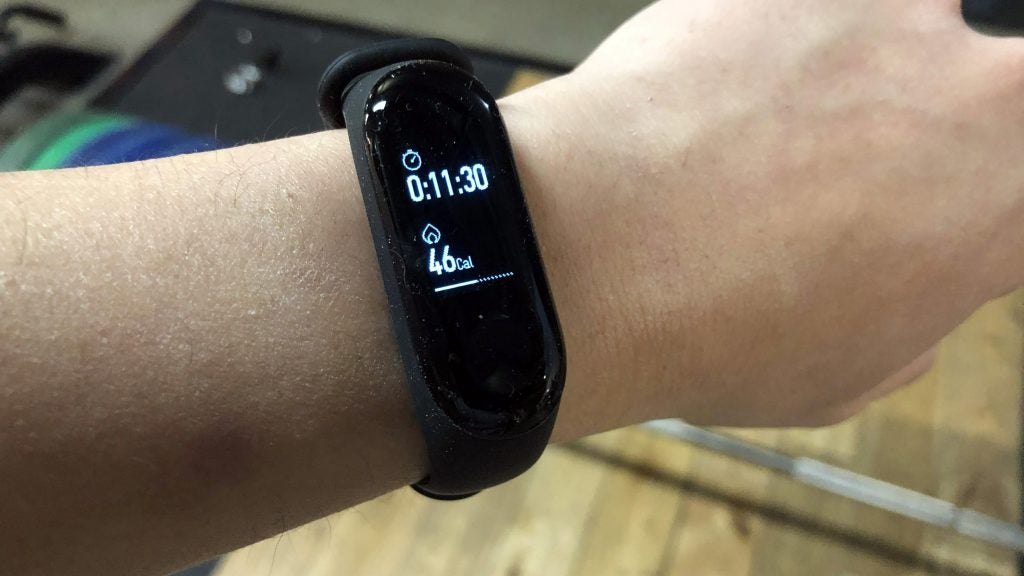 As for exercise tracking, annoyingly there’s not much you can do from the Mi Band 3 itself aside from start a generic ‘Exercise’. This triggers a timer and the heart rate sensor and gives you a calorie burn reading. You can swipe between screens to see different information as well.

You have to break out the app if you want to get more specific and start workouts such as Outdoor Run, Treadmill, Outdoor Cycling or Walking. The outdoor options can use your phone’s GPS for more accurate distance. The post-exercise screen in the app can show a breakdown of time spent in different heart rate zones.

Xiaomi rates the battery as up to 22 days, but that’s with some of the more battery-sapping features turned off. Turn on the continuous heart rate monitoring and endurance takes a hit. With this turned on, I still had 25% after 10 days, so the stamina is still very good.

To charge you need to pop the tracker out of the strap and slide it into a proprietary cradle. It’s a bit fiddly but at least it’s not something you’re doing every week. 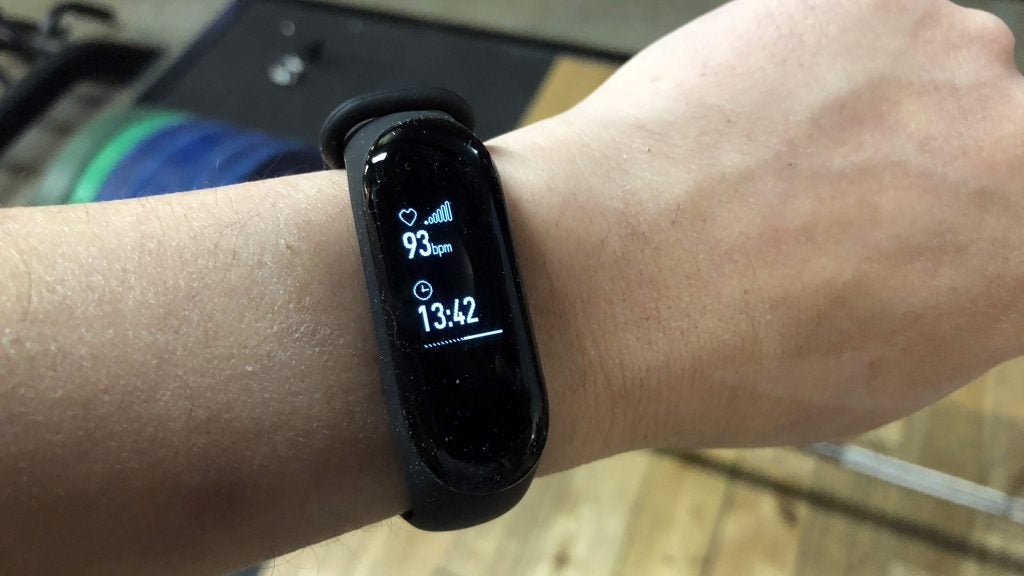 Why should I buy the Xiaomi Mi Band 3?

If you’re not looking to spend a lot of money, the Mi Band 3 does a lot of things decently enough. The general activity tracking works well, the smartphone notifications, while limited, are a handy bonus and it’s worth saying again just how cheap this thing is.

But if you care at all about the accuracy of the data being collected, such as sleep or heart rate, you’re probably better off spending a little more. The Fitbit Flex 2 does away with a display, but the accuracy of Fitbit’s heart rate sensor and sleep tracking tech is better. Then there’s also the Huawei Band 2 Pro, which nowadays can be had for around £40 and somehow manages to include a GPS sensor.

A barebones fitness tracker for a budget price but its actual accuracy leaves something to be desired.