If you know about Fitbit already, it’s probably for its Fitbit Ultra wireless activity tracker, which plots how much exercise you get, day-by-day and minute-by-minute. Its latest health-obsessed gadget works along similar lines. However, the Fitbit Aria tracks your weight and body fat percentage rather than how much you move about.

Design
To look at the Fitbit Aria in-situ, you’d simply guess it is a normal weighing scale, and a pretty stylish one at that. It comes in either a white or black finish and its top is a hardy slab of 0.3in thick glass, giving it a slick look and feel that you don’t get with most bathroom scales. 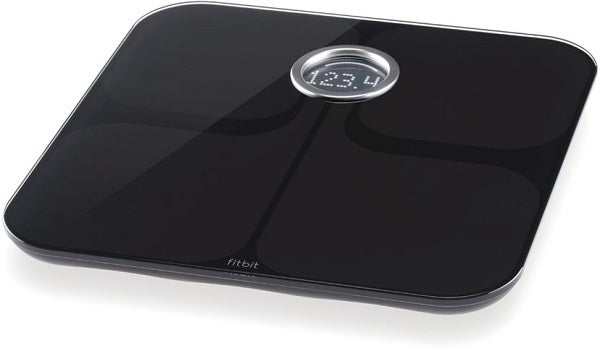 At first we assumed the glass was there to aid the body fat measurement, but it’s actually primarily to give improve strength. Regardless, we imagine the scale will look the part in most any bathroom – to stereotype we might suggest black for gym obsessed “lads” and white for those who’d rather let the Fitbit Aria melt into bathroom lino.

Adding to the stylised approach, the Fitbit Aria uses a perfectly circular porthole-style display of crisp, bright LEDs. Functionally it works well, providing excellent clarity – and in a relatively high-tech product it brings with it a slightly retro kitschy feel. 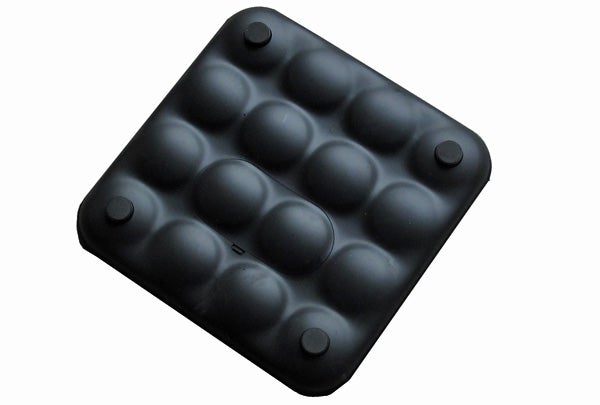 The underside of the Fitbit Aria sports an embossed circles pattern, while four feet buffer its bottom. In the centre of this rear is where the battery cover sits. What we found initially surprising is that the Aria needs just four AA batteries to operate, given its relatively advanced wireless connectivity. 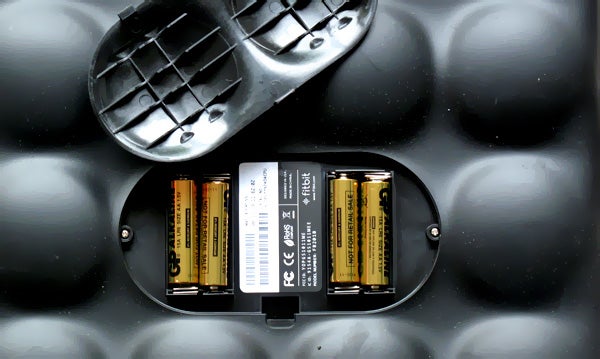 Features
The Fitbit Aria’s job is to measure your weight and body fat percentage – preferably daily – and upload the information to a cloud-based account over your home Wi-Fi network. Fitbit says the four batteries will last up to six months. And it comfortably lasted the few weeks of our test time without running out.

Another claim made for the battery is that its stamina is helped-out by the dual antennae inside, where some rivals feature just the single antenna. It coped with our notoriously flaky home Wi-Fi network signal very well, seemingly never missing out on an upload.

Setup
The Fitbit Aria can sense up to eight different people, using historical data to work out who is whom. In our testing, it worked too, labelling any new people as Guest.

To use the Aria as a “dumb” scale is to miss the point, though, and setup is mostly painless. 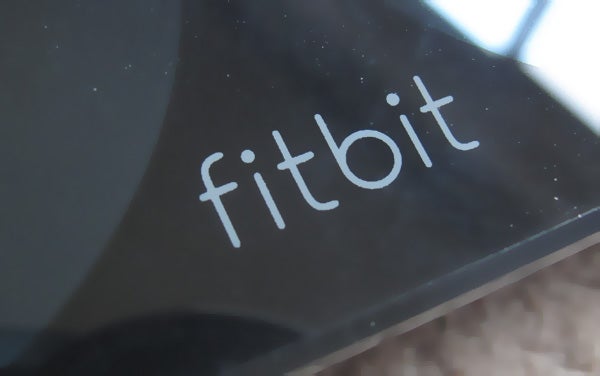 The main aim of the initial setup is to get the Aria hooked up to your home Wi-Fi, but without any way of tapping in a WEP key, this is a little more involved than you might assume. You have to connect the Aria to a PC or smartphone directly, from which you can then share your home Wi-Fi.

Thankfully, no screws or cables are required.

Taking out the Fitbit Aria’s batteries for 10 seconds and putting them back in puts the scale into setup mode, in which it pipes out its own Wi-Fi hotspot. Connect to the Aria’s network using a compatible smartphone (iPhone/Android) or computer with app installed and you’re good to go. This is the last time the Aria has to interface with another device too, as from this point all uploads are handled automatically – taking place every time a new measurement is made.

Smartphone App
The brilliant thing about the Fitbit Aria – and the Fitbit Ultra too – is that it takes all the laborious bits of watching your weight and general fitness. Plugging into the existing Fitbit infrastructure, all your information is easily accessible from the free smartphone app or the full PC/Mac app. 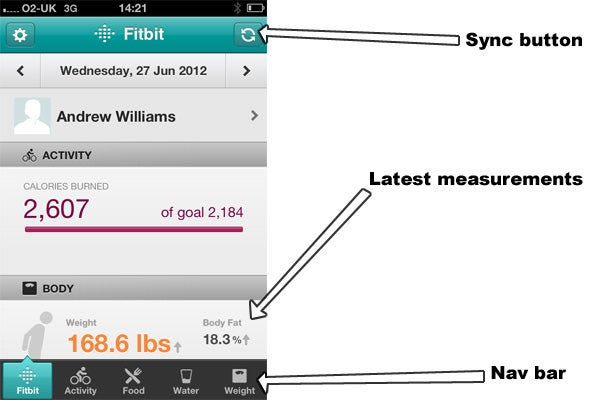 It shows your body fat percentage and weight as a graph, tracking changes over time. You have control over the timescale too, making it easy enough to get a daily, weekly or monthly view. 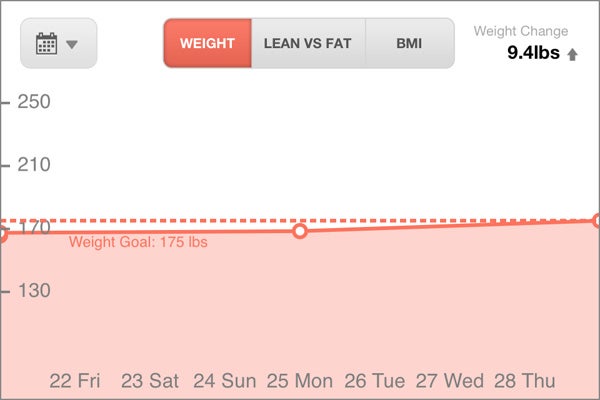 However, at present the Aria’s influence over the smartphone app in particular feels limited in comparison to the information the Fitbit Ultra provides. If you’re not using the Aria in tandem with an Ultra motion tracker, the app can end up feeling a bit empty – there are tabs to input activities, water intake and food consumption, but it’s the automation part of the Fitbit equation that we like the most. And that kind of laziness is, of course, why Fitbit has a place in the market. Ho hum.

Also, the smartphone weight graph is limited in its usefulness when viewed in portrait mode. The app could do with a tweak or two, but it works and – given that it’s free – works pretty well. There’s no subscription cost, either, which makes the £99.99 outlay much easier to digest.

In-use and How It Works
Once setup, using the Fitbit Aria is just like using any other bathroom scale. It needs to be set down on a fairly hard surface in order to accurately assess weight, and the measurement only takes a second or two.

As long as you’re recognised as a previous user, the will display your weight in lbs, followed by your body fat percentage and your initials – just to check you’ve been pegged as the right person. The display then displays a little “loading” style symbol, indicating that it’s connecting to your home network and uploading data.

The weight-assessing part of the Fitbit Aria is simple enough to understand, but the body fat percentage bit is generally less-understood. A pattern of ITO electrodes sit on the top of the scale and send electrical signals through your body to measure its biometric impedance. Going much further into the science will see us flounder embarrassingly, but it boils down to the signal reacting differently to fat and water, letting the Aria make a reasonably estimate of your fat content.

It’s not tremendously accurate – and for a while ranked us at 40 per cent body fat, when the truth is less than half this figure – but does the job for tracking changes over time.

Value
If you don’t mind laboriously inputting measurements manually into an excel spreadsheet or note book, we can’t ignore that you can spend a lot less on a body fat monitor. Cut out the Wi-Fi gubbins and several highly-regarded models are available for around £40-50.

However, the ease of use of the Aria shouldn’t be underestimated, letting you spend less time and effort on the admin of staying fit, and more on, y’know, exercise. Its closest rival is the Withings Wi-Fi Body Scale, which offers similar functionality and a similar design, but costs £20 more. The benefit of the Withings model is that as it has been available for a couple of years now, it’s ready for integration with many smartphone apps, including Runkeeper. 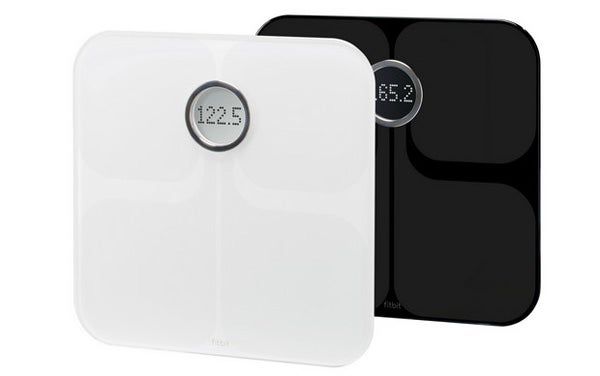 It’ll take a little time for the Aria to catch up, but as the scale’s API is readily available to developers, we’re reasonably confident it’ll happen in due time.

Good-looking and easy to use, the Fitbit Aria is a painless way to keep track of your body weight and fat percentage – especially useful if you’re building muscle rather than just out to lose weight. Monitoring changes is dead simple too, thanks to the free smartphone. Widespread integration with other fitness apps isn’t here yet, but if you have the patience it should ramp-up soon.