All of which makes it a pleasure to report that XCOM: Enemy Unknown is a remarkable remake, which does justice to the Microprose original without either aping it or wrecking it with stupid modernisations. It’s also a turn-based strategy game that reminds you what’s so great about turn-based strategy, and one that works superbly on a TV screen with a console controller. In fact, we’ll stick our necks out and say it’s one of the best console strategy games ever made. Maybe even the best. 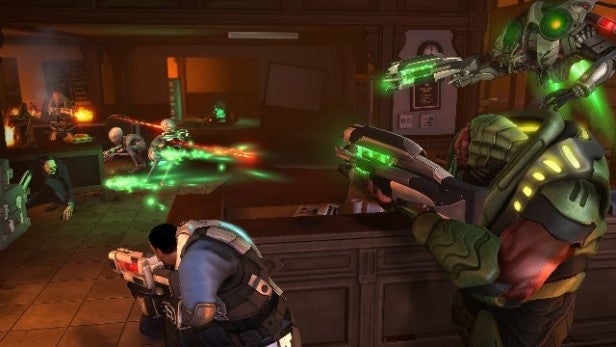 Perhaps that’s because there’s something about turn-based strategy that’s so much more conducive to a console controller than real-time strategy, where – without rapid, precise control of the pointer – players tend to struggle.

In the new XCOM: Enemy Unknown, as in the old XCOM and Laser Squad before it, you control a team of four to six XCOM troopers as they battle alien forces invading Earth. On city streets, in shops, bars and restaurants, or in forests and swamps you fight it out, each side taking turns to move and shoot, until objectives are met or one side has been destroyed. Different members of the squad have different weapons and capabilities, functioning as assault troops, support troops, snipers and heavy gunners, and the key to success is in how you move your units, how you take advantage of the available cover, and how you use those capabilities to take down the enemy while keeping your team safe. 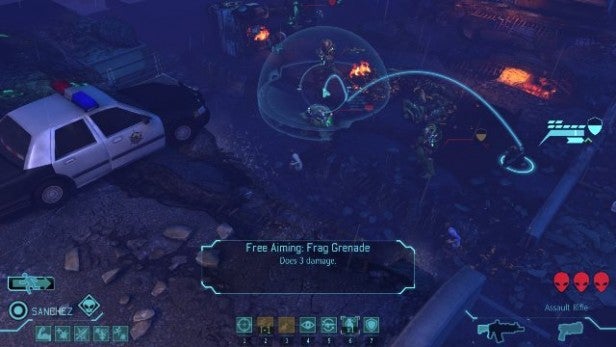 XCOM: Enemy Unknown isn’t really doing anything that different, but there is a bit more sophistication to the action. Each troop has, in effect, two actions per turn, allowing them to move and fire, move and ‘overwatch’ so that they can fire if chance arises in the enemy’s turn, or simply sprint for a further point. It’s all very neatly handled on the Xbox 360 controller, through an elegant combination of the analogue pad, the shoulder bumpers and the right trigger, and it’s surprising how fast and intuitive it all becomes with time. You really need to be aware of cover, and of enemies doing their best to flank you, and the more the game goes on, the more you need to think about how you move forwards, and how you deal with fast-moving, melee-focused enemies, sharpshooters and serious threats. XCOM: Enemy Unknown isn’t the most cerebral or slow-moving strategy game, but that doesn’t mean you can leave your brain at the loading screen.

Part of XCOM’s success comes down to presentation. The graphics are slightly dated and a bit cartoony, but there’s clever use of camera angles, action cut-aways and sudden changes of point-of-view to make what’s still a turn-based game feel more like an action-game. Reveal a team of fifties-style alien sectoids, and you’ll get a close-up of them being startled and preparing to fight back. Send an assault troop in on a high-speed dash for cover, and the view changes to a Gears of War 3 style roadie run. Put a character on overwatch, and when an alien comes into view you’ll see the action freeze, them take their shot and (hopefully) one extra-terrestrial terror bite the dust. Even targeting is done from a close-up, third-person view rather than the standard-issue isometric view. The gameplay hasn’t changed, but it’s all freshened up by a more dynamic, exciting approach to the action. 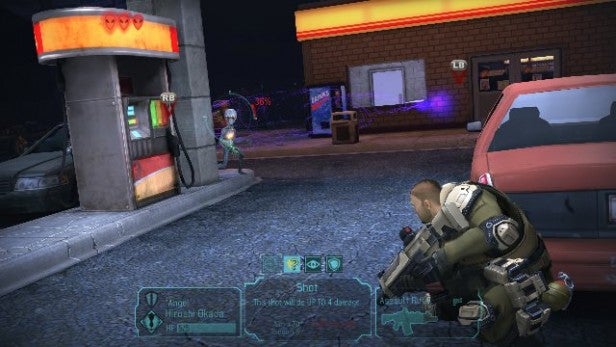 What’s more, XCOM: Enemy Unknown makes you care. Troops that survive one mission rise in rank, allowing you to select new perks and capabilities and unlocking Officer upgrades that allow you to field more troops or recruit better new troops. As a result, when one of your team goes down you feel it, to the extent that it’s always tempting to hold your veterans back so that they don’t get hurt.

Of course, you can save and reload when someone goes down, but it’s a tenser experience if you avoid that route, and there’s even a special ‘Ironman’ mode that handles saving for you, so that bad decisions are locked down and can’t just be undone. What’s more, there are random elements to the gameplay, so simply reloading won’t mean you can predict where the next attack will come from and adjust accordingly – the situation might change with the reload. (As a word of caution, we’d advise saving regularly or clicking ‘autosave’ on in the options menu. The alternative could be several hours of lost play.) 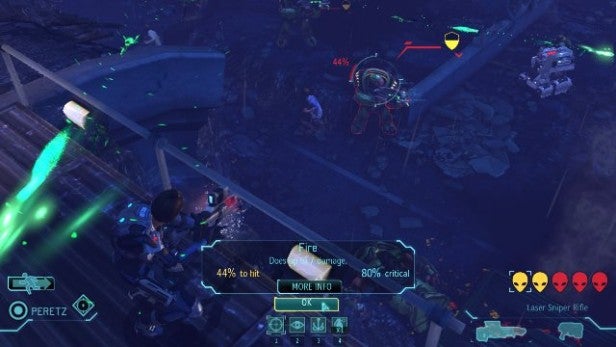 All of this makes XCOM: Enemy Unknown hugely compelling, but we’re actually only talking about half of the game. The other half takes place at XCOM HQ, as you research the alien bodies and technologies you bring back from the battlefield, send up satellites to watch the nations of the Earth, build new weapons, armour and equipment, and add useful new facilities to your base. It’s also here where you can keep track of the world map, and of the changing panic levels of the different countries and continents. Action in the HQ will determine additional objectives, like bringing a specific alien back alive or halting an abduction attempt in a certain country. There are nicely-done cut-scenes to signal major plot developments, and it’s all nicely structured and animated, with menus disguised as locations or displays wherever possible. It’s the glue that binds the short missions together.

Except it’s more than that. The more you play XCOM: Enemy Unknown, the more you realise that the HQ isn’t just a framework. If you’re not researching the right projects, building the right facilities, sending up satellites and protecting all the nations of the Earth, then you’re going to struggle as the game goes on. You’ll find yourself losing support from South America or Asia; you’ll find that you haven’t got the interceptors you need to attack incoming alien ships, or that you haven’t got the weapons to deal with new, more terrifying alien creatures. 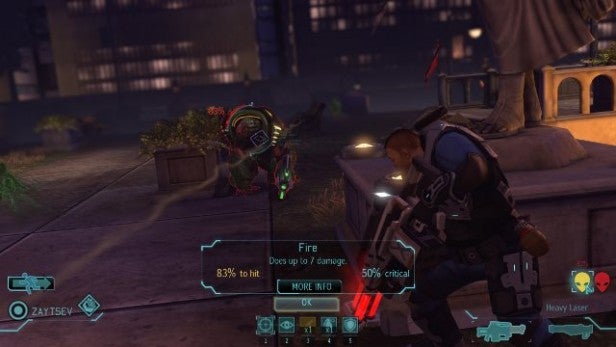 If we have any complaint about XCOM: Enemy Unknown it’s this: that there isn’t an awful lot of guidance on what you should be doing, or even how to do it, beyond the basic screens. It’s not hard to discover all this for yourself, but the fact that you can easily spend the first eight hours playing the game only to discover you’ve made fundamental errors might come as a shock to some modern gamers. You have to make difficult choices, and there’s no way to get everything right. On the other hand, the fact that you can go through this and still come back for more goes to show how much gameplay there is, and how addictive that gameplay can be.

That’s because XCOM: Enemy Unknown is at heart – like Diablo III, Civilization IV or Shogun 2 (note: all derivatives of nineties classics) – a fiendish time sink. There’s no real sense of development from mission to mission bar the introduction of new aliens and your own troops’ new skills and weapons, but if anything that just keeps you going. Playing it at night, as we’ve been doing, is lethal for good sleeping habits. The clock might read 2.30am, but a voice is whispering ‘just one more mission.’ It ought to ship with a health warning. 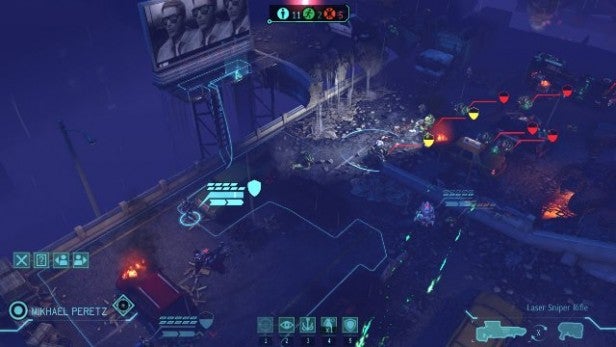 Even if you tire of finishing the title’s single-player campaign, there’s always the XCOM: Enemy Unknown multiplayer options to keep coming back to. Here you can field mixed teams of humans and aliens against another player, with two-minute time limits per turn to keep the action moving fast. It pays to be experienced with different troop types and the more advanced areas of the game, but it’s tense, well-paced and entertaining.

XCOM: Enemy Unknown was always going to be a hit with PC gamers, but it’s a hugely impressive console game as well. It might not have the best graphics or the biggest stars, but it has got slick controls, masses of personality and some of the most compelling and addictive gameplay around. If you played and loved the original XCOM games then you’re going to do the same with this, but even if XCOM means nothing to you, you really should give this game a go