Call it what you will. The Xbox 360 Slim, the Xbox 360 Slimline the Xbox 360 S or even what Microsoft has actually decided to go with: the Xbox 360 250GB. The name doesn’t matter, what matters is that it’s here and whether it’s a worthy upgrade to its rather successful predecessor. 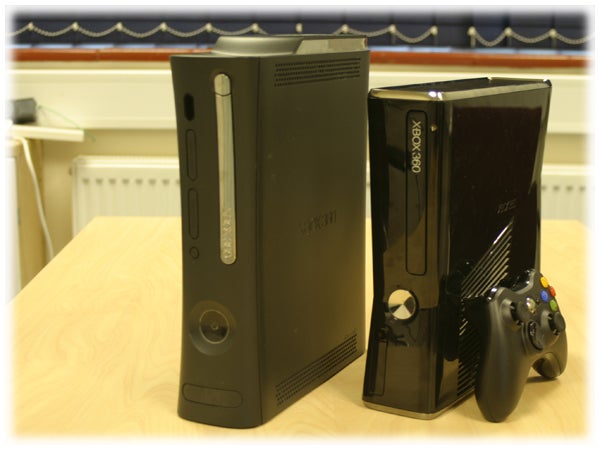 The difference strikes you immediately. Gone is the attractively understated matt finish of both the original white Xbox 360 and the later, blacker, Xbox 360 Elite. Instead this new Xbox 360 250GB is finished in glossy black plastic. We’re not so sure that we didn’t prefer the previous colour scheme, but since the PS3 Slim changed from gloss black to matt black, we presume Microsoft has no choice but to go the other way. The chassis design itself is updated to good effect, though, with the front having a far more pronounced “X” shape to it – albeit stretched out a little. In short: we like it. 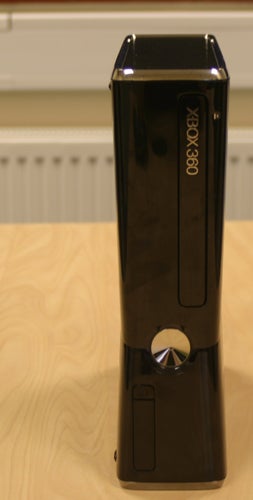 The chassis isn’t really that much smaller, measuring 270mm x 75mm x 264mm versus the old unit’s 310mm x 80mm x 260mm. That’s a 17 per cent reduction in volume (from 6.5 litres to 5.4 litres maths fans) but in practical terms you’ll be allocating about the same amount of free space to this console as the previous SKU. The system’s weight is down from 3.5kg to 2.9kg – although quite who would upgrade to or buy the Xbox 360 250GB just because it’s a little lighter is beyond comprehension.


The Xbox 360 250GB’s power and eject buttons are now capacitive, rather than physical. Whether the ‘bing’ sound accompanying the DVD drive ejection is an intentional tie-in to Microsoft’s search engine is debatable, but we don’t believe in co-incidence.

The infamously large power brick is no longer, replaced by a much smaller affair, no bigger than you’d find supplied with a 15in laptop. Arguably it’s a greater boon than the console’s size-reduction – housing that oversized unit inside an AV cabinet wasn’t the easiest task. The connecting cable is also less beefy, which makes orienting it that much easier, too. This reduction is size is no doubt a fringe benefit of the reduced power draw of the Xbox 360 250GB – 135W, down from the ‘Jasper‘ units’ 150W.

As a result of the far-too-long-awaited Dashboard update which finally made Memory Units redundant, the Xbox 360 250GB forgoes the ports for those devices, leaving only two USB ports up front. Around the back there are now three USB ports – two more than previously – alongside a dedicated port for connecting a Kinect kit once available. There’s a Kensington lock connection point, too, for ensuring that the boardroom Xbox doesn’t go walkabout. 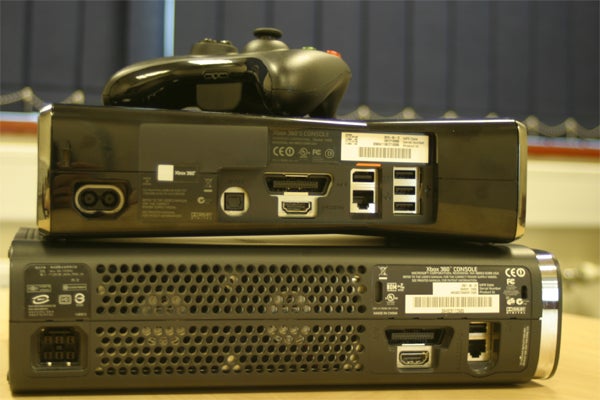 Connectivity options are almost unchanged from the previous model Xbox 360. The proprietary AV port remains, as does an HDMI port, but the digital optical audio output is now on the console itself, although it can still be accessed via the AV adaptor is you so choose. Best of all, however, is the provision of built-in 802.11b/g/n Wi-Fi. Not only is this much more convenient than attaching an adaptor, it’s also a significant cost saving considering how ungodly expensive the Xbox 360 Wi-Fi adaptor was.

There was one more thing, too… oh yes: you’ll be surprised to hear that this Xbox 360 has a 250GB hard drive. Who would have guessed? 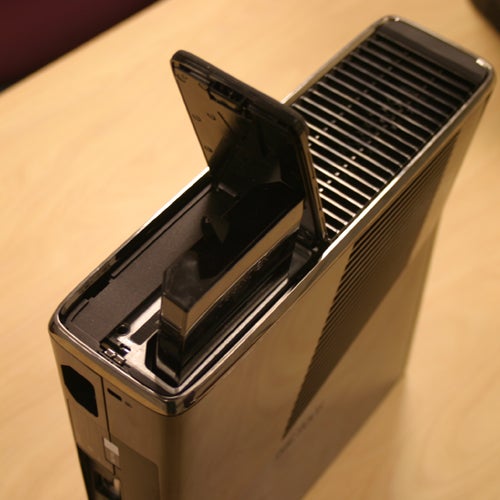 The Xbox 360 250 GB hard drive is, like its predecessor, removable. Annoyingly this is once again in a (fairly attractive as these things go) proprietary cartridge, even though the port is no longer custom – there’s simply a gap exposing the hard drives SATA connector. Quite why Microsoft still hasn’t gone down the Sony PS3 route of letting you use any hard drive you like we don’t know, but c’est la vie. 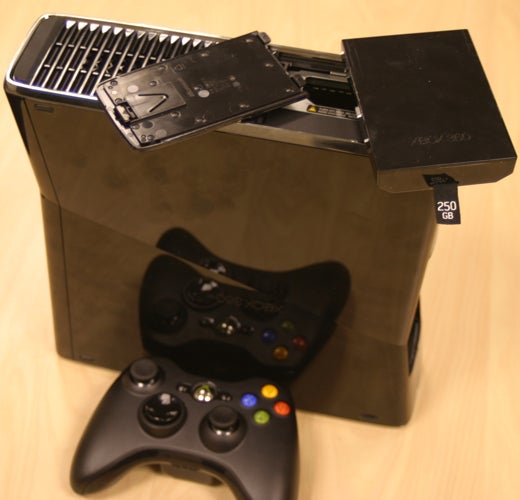 The least defensible criticism is that Microsoft only supplies standard definition cables in the box with the Xbox 360 250GB. We’d like to think that the days when people would ignorantly connect their games console to a TV via a Composite video cable and wonder why HD doesn’t look all that great after all are behind us, and that Xbox 360 250GB-buyers are savvy enough to know they’ll need to buy connecting cables with their console. But was the cost of including an HDMI cable really prohibitive, Microsoft? It seems unlikely to us.


While the hardware layout has changed, the core specs of the Xbox 360 250GB remain entirely unchanged. Updates in pursuit of power reduction aside, there’s nothing different about the Xbox 360 260GB’s silicon. This is, of course, only expected.

The reduced power draw couples with much improved ventilation to deliver one of the Xbox 360 250GB’s biggest improvements over the previous models. The slimline console is significantly quieter than our resident Xbox 360 Elite. Idling at the dashboard or watching a couple of videos downloaded from the Marketplace the system was inaudible. And while the console does get pretty warm to the touch the fans never spin-up enough to intrude. 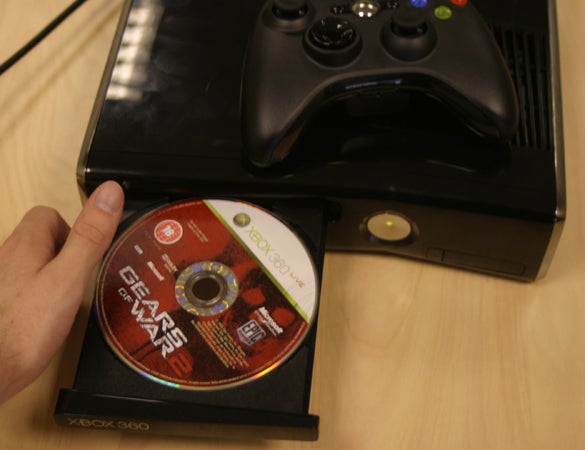 Now that the Xbox 360 no longer sounds like an F-14A Tomcat on flyby every time you do more than admire it, powered off, from a distance, it’s DivX playback ability looks much more attractive. Our PlayStation 3 still does a better job of upscaling standard definition content, mind, and the XMB is far and away the better menu system for navigating media. But we already know that the PS3 is the better all-rounder, and this Xbox 360 SKU refresh can’t hope to change that. 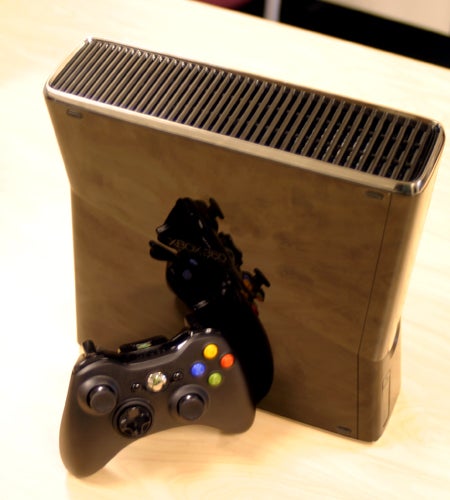 Those hoping for a speed boost to the DVD drive and hard drive transfer rates will be disappointed. In our testing there wasn’t any perceptible difference in game loading times or hard drive-install times. The latter are still a ‘start, go make a cup of coffee, return’ affair. Hard drive-based game loads remain the way to go, though, because now DVD drive spinning up is still annoyingly loud.


Realistically, there are very few compelling reasons to upgrade to the Xbox 360 250GB if you have a previous model. Sure it’s less power-hungry, quieter and has a larger capacity hard drive bundled than the Elite (limited edition specials accepted) ever did but under the window dressing it’s still just an Xbox.

If you’re buying a new console, however, the Xbox 360 250GB makes a great case for itself. The £199 asking price is £50 cheaper than the rival PS3 Slim, and the feature set is finally comparable, thanks to the inclusion of Wi-Fi. And while we still need to be convinced by Kinect, it’s hard to deny that to a certain demographic it’s going to have a massive appeal.


Put simply, the Xbox 360 250GB is the best Xbox Microsoft has made thus far. It’s better featured, with more USB ports and built-in wireless, its more energy efficient internals mean it’s quieter and less power-hungry than its predecessors and, perhaps most importantly, it’s priced more aggressively against the PlayStation 3 Slim than ever before.