Available on PC (version reviewed) and Mac
We should know by now that Blizzard doesn’t believe in a revolutionary
approach to games design. Just as the main moan about StartCraft II was
that it was, actually, a lot like StarCraft, so you can guarantee that
some people will be saying that Diablo III is a lot like Diablo II,
which was itself a lot like Diablo. Forget any ideas you might have
about new combat systems, cutting-edge 3D graphics, freeform
exploration, rich player choice or deep character interaction. Diablo
III is, like its predecessors, primarily a game of clicking the left
mouse button several times a second while staring fairly mindlessly at
the screen. 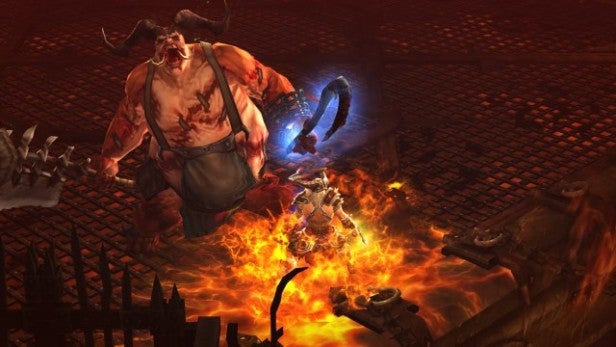 In
this respect, Diablo III is the gaming equivalent of one of those
Vegas casinos that doles out cheap beer and sandwiches and live entertainment
so that you’ll keep on spending money and not stop to wonder if you’re
throwing it all down the drain. Diablo III effectively does the same
thing, constantly plying you with new toys, funnelling you in the right
direction and smoothing out any obstacle that might make you pause, only here the currency isn’t money but time. While
Blizzard’s games have rarely achieved the kind of review scores that,
say, Valve nearly take for granted, it’s created some of the most
popular and long-running time-sinks in gaming history. Diablo III is another one to add to the list. 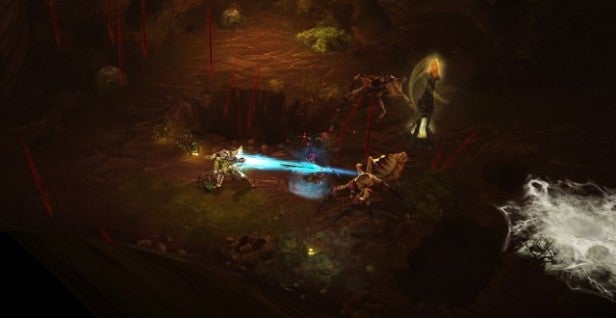 Xhead: Shooting stars and smashing heads
Want a storyline? Well, Diablo III does have one. Your
hero, on the trail of a mysterious falling star, arrives in the
environs of the original Diablo town of Tristram, and finds themselves
battling an undead scourge and the evil cult behind it. Behind this, you
won’t be surprised to hear, are the remaining Lords of Hell, and as the
game progresses you’ll find yourself exploring new locations and taking
the fight to increasingly demonic foes.

This doesn’t really do justice
to a game with a surprisingly intricate back-story, told through found
journals, books and ghostly apparitions, but then a back-story is really all it is. Diablo III doesn’t try to out-do the likes of The Witcher
II or Mass Effect with complex plotlines, moral questions and the rest; in the end, it’s all about bashing heads. 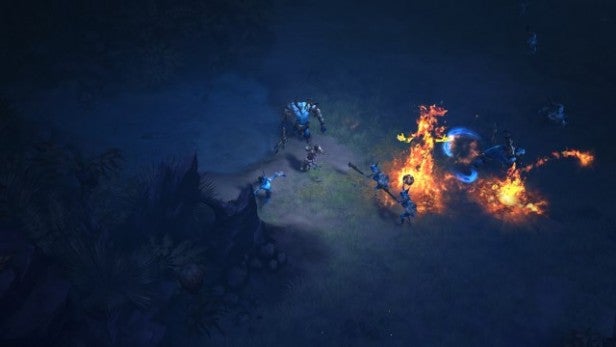 How this works will depend on what character class you adopt. The Barbarian is your classic Diablo warrior, big, heavy, able to wield and wear the heaviest weapons and armour, and really quite simple to play. The Wizard, meanwhile, is your classic magic user: a bit weak at first, then hugely powerful at a distance but more vulnerable close-up.

The new Witch Doctor is a hoot, initially a weakling with limited melee skills and a poor missile attack, but a great, flexible choice with undead minions to summon, some thoroughly nasty spells and a range of voodoo powers that are great for constraining opponents while you tackle them from a safe range.

The Demon Hunter is a ranged weapons specialist, with dual-crossbow capabilities and a selection of vicious traps. Finally, our own current favourite, the Monk, provides a great balance between devastating, high-speed melee attacks and useful defensive and healing magic.

With our grumbling hats on we’ll note that progression through the classes is rather linear, and that you won’t find the flexibility of, say, The Elder Scrolls V: Skyrim or Kingdoms of Amalur: The Reckoning here – at least not for a while. But what impresses is how well each class works within the game, each providing some new twist to the fighting, and each slightly altering the way the game’s cycle of addiction works. With some classes it’s really all about the weapon upgrades, with new attacks almost secondary, while with others, particularly the Witch Doctor, the real draw lies in levelling up and unlocking the next bit of dark sorcery you can unleash on your foes. 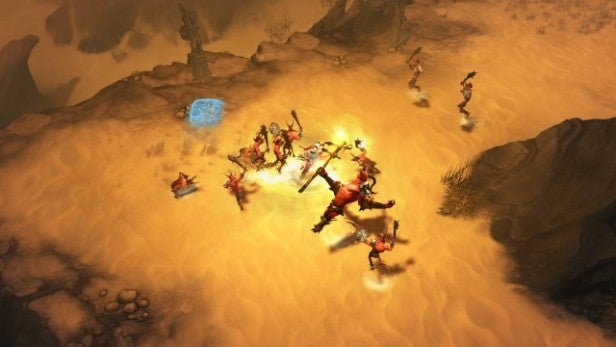 Fighting evil
True, the combat is very simple. Left-clicking on a monster will hit them with your current primary attack or power, while right-clicking will unleash a more powerful but time-locked secondary attack. On top of this, there are four hotkey capabilities that give you more offensive, defensive or healing options. But in a way this simplicity works in the game’s favour. We’re not sure that you actually play Diablo III consciously like you might less action-oriented RPGs. Instead, time seems to dissolve in a flurry of clicks, punctuated only by the odd moment swapping weapons and armour for new discoveries, or travelling back to the nearest town to sell unwanted gear and buy or craft new kit.

Somehow, this doesn’t matter. There’s something about the speed of play, the frequency of combat and the generous quantities of cartoon blood-and-gore that just works. It might be brainless and repetitive, but that doesn’t mean it isn’t fun.

It’s the attention to detail that really impresses: the way you can compare one magic sword of wounding to another at a glance, or the way even seemingly useless items can be broken down and used by local craftsmen to build new ones. Sensibly-placed waypoints keep aimless wandering and back-tracking to a minimum, and no task proves irksome or boring.

Diablo III also has more engaging non-player characters than its predecessors, and even makes the most of its AI-controlled allies, now called followers. You can have one at a time, and each has his or her own distinct personality and a limited selection of repartee with which to engage you as you quest. Each can also be levelled up and equipped with basic arms and armour as you go, and you’ll find that they make the action not just less challenging, but also a little less lonesome. 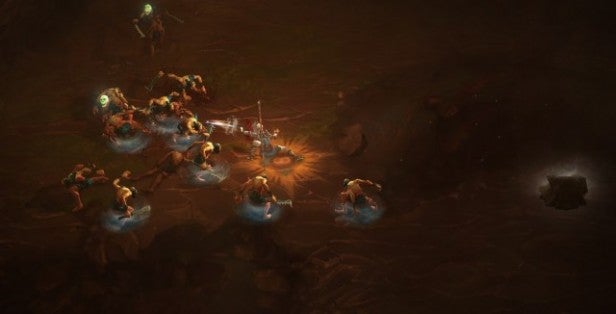 Play together, slay together
Diablo III works at a relentless pace, not wanting you to stop killing and collecting for more than a minute, and there’s no question that – while playing it is a mindless and repetitive experience – it’s one of the most compulsive and entertaining mindless and repetitive experiences you can have. It’s also a game that works beautifully in co-op multiplayer. Each player gets their own share of loot, and the simplicity of the gameplay means that everyone is concentrating on moving forwards and bashing everything that moves, with a little room to buff or heal their comrades.

It’s a great game played solo or with strangers – and Blizzard has made it incredibly easy to join a pick-up game, with your level and your progress through the campaign the only limiting factors. However, it’s even better when played with friends, and it’s this that will encourage you to keep coming back long-term, trying our new heroes (using the ten slots available) or giving old ones another chance to shine. It’s also here that Diablo’s traditional insistence on randomly-generated dungeons makes most sense.

Visual strengths
Some critics have been rough about the graphics in Diablo III. They’re nice but hardly cutting edge, and not even a vast step on from the more cartoony Torchlight or the five-year-old Titan Quest. But there’s an artistry at work in Diablo III that’s not quite there in either of those games, and whether you’re roaming through the desert, a creepy forest or another of the game’s sprawling dungeons, there’s always some incidental detail or chunk of background scenery that makes the place feel more atmospheric, more alive. Textural detail isn’t everything, and Diablo III does a lot with lighting, architecture, strong creature design and atmospherics.

What’s more, you don’t need a cutting-edge PC to make Diablo III look good and run smoothly. We’ve been playing it on both a mid-range gaming PC and a more modest laptop, and as long as you have something with a decent dual-core processor and a dedicated GPU you’ll be able to play Diablo III without dialling down all the detail settings to their minimum. 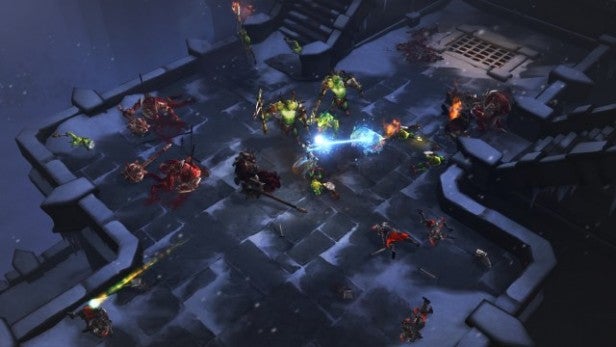 Connection issues
In fact, the biggest issue with Diablo III is its insistence on Internet connectivity. Even in a single player campaign the game client is constantly swapping info with the servers, and while there are considerable upsides – it makes it more difficult to cheat, you don’t need to save, and your game is accessible from any PC with the client installed – there are also considerable downsides. The infamous ‘error 37’ of the opening night was one, preventing players from even sampling the game they’d just rushed out to buy. Losing the connection and being tossed out of the game is another, and hugely annoying when you then restart at the beginning of the level with the whole map to clear again.

It’s an irritation, but not one that seriously affects the Diablo III experience, at least for now – if in the unlikely event that online support for the game dries up in the future, it could become unplayable. The same goes for our gripes about the lack of any real innovation, and any slight disappointment you might feel about the visuals not pushing the latest GPUs. The fact is that Diablo III delivers what fans expect from a 2012 Diablo, and what fans want. While we’ll doubtless see many games that will garner more respect and critical adulation in the next six months, we won’t see many that will inspire more love. 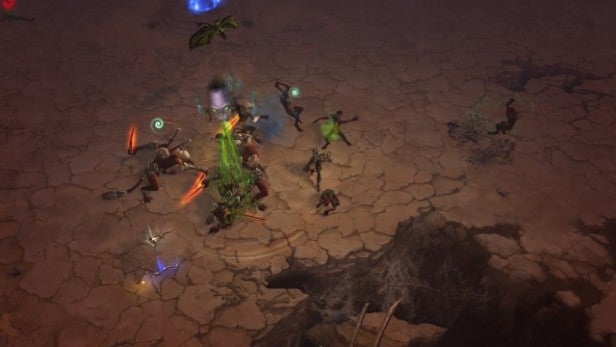 Verdict
You want more Diablo? You’ve got more Diablo. Diablo III doesn’t push any boundaries in graphics or gameplay, but it’s an incredibly slick and addictive action-RPG that practically perfects the classic slaying-looting-slaying cycle. A weekend-long binge might leave you wanting something more substantial, but Blizzard’s latest has a diabolic way of making you come back for more.