Available October 17 on PS4 (version tested), Xbox One and PC

The biggest issue with the WWE series in 2017 is that, like most annual sports titles, you just know it can’t truly evolve. That doesn’t mean the end result is bad, but it does take a certain excitement away given you have a good idea of what to expect even before pushing start. This is especially true where World Wrestling Entertainment is concerned because at its core foundations, the game has been more or less the same for a long time.

Thankfully, WWE 2K18 is still the best iteration of this concept for some time. Be that the visuals, the way it plays, the roster, or the sheer amount of modes on offer, this is far more refined, polished and, ultimately, fun.

The main reason for this is due to the returning creation suite which is otherworldly. While most games these days are keen to feature an area where you can design to your heart’s content, WWE takes that premise into another stratosphere. Regardless whether you want to create-a-wrestler, create-an-arena, create-an-entrance or whichever option floats your boat, the sheer depth here feels endless. 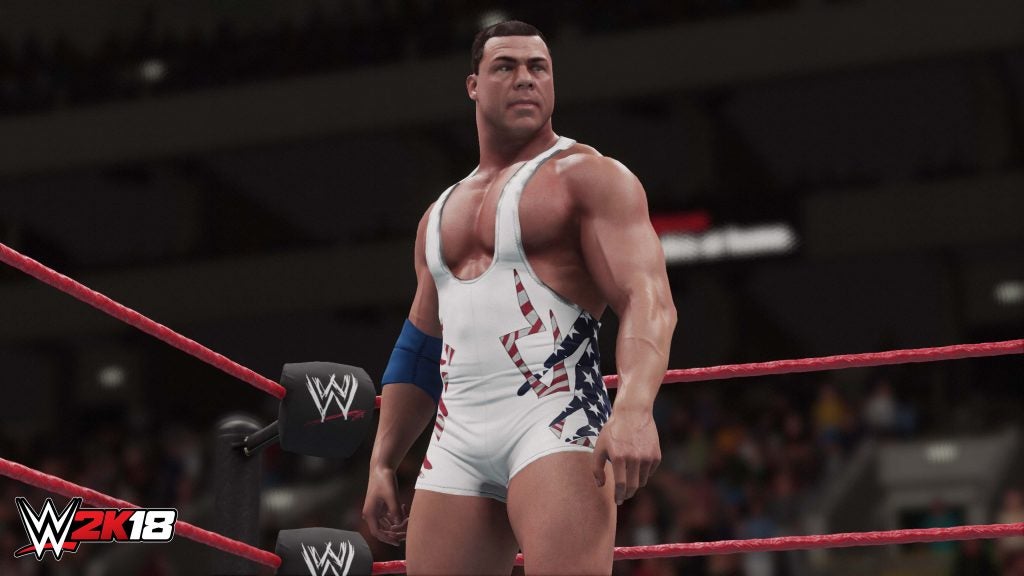 While there are, of course, limitations, you’re going to have to dig deep to find where that end point is because 2K has gone all out to ensure few stones are left unturned. This is especially true when putting together your own WWE superstar because I’m almost positive you can create any wrestler that has ever existed. Some of the additions are mind-blowing simply because they’re so niche. It still takes a fair bit of practice before you understand how to get the most out of it, but none of its competitors come close. It’s the definition of a ‘creation suite’.

This is especially pleasing as you can then take your hand-crafted wrestler and pop them into MyCareer. This isn’t as emphatic or huge as what 2K did with this year’s NBA series, but is still a big step forward for WWE – there’s far more freedom now in comparison to 2016’s effort.

As well as a small environment to explore where you can experience what it’s like to be backstage at an event, there’s the updated promo engine – which has improved – the opportunity to chat to other talent, along with other challenges to keep you distracted. The bread and butter is still in-ring matches and working your way from relative nobody to world champion, but the template as a whole feels much more expansive and interesting. You never feel like you’re just going through the motions. 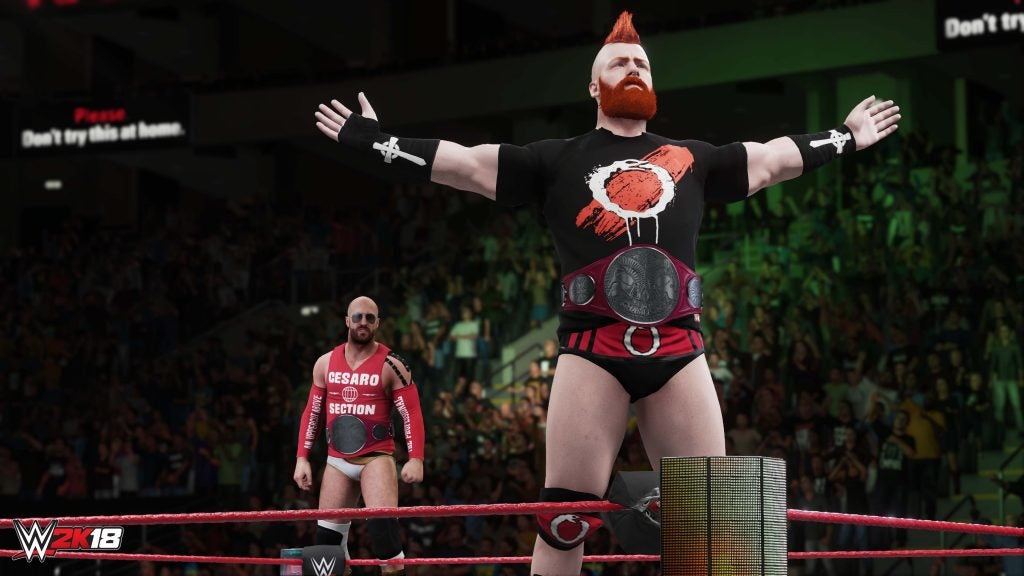 This is twice as nice as there’s also a spin-off mode called ‘Road To Glory’. Based off MyCareer, you can take a created superstar and put them into online battles against other players to try and qualify for a WWE PPV. It’s a great idea as it actually has you fighting for something tangible, and between all this you can unlock bonuses, earn points and upgrade your creation to become a pro-wrestling hero.

It’s structured well and gives you a real impetus to try and succeed, the only real issues arising if you hit a snag connection-wise. Thankfully I didn’t run into many, but that could change as the community starts to increase.

Such praise is deserved for most of the modes returning in 2K18, too, although some may be disappointed with what Universe Mode brings to the table. It’s certainly not bad and if you want to throw yourself into it you’ll have a blast, but it hasn’t evolved much in the last 12 months and there’s undoubtedly more potential here. It should, longterm, become the be all and end all. Instead it’s treading water. 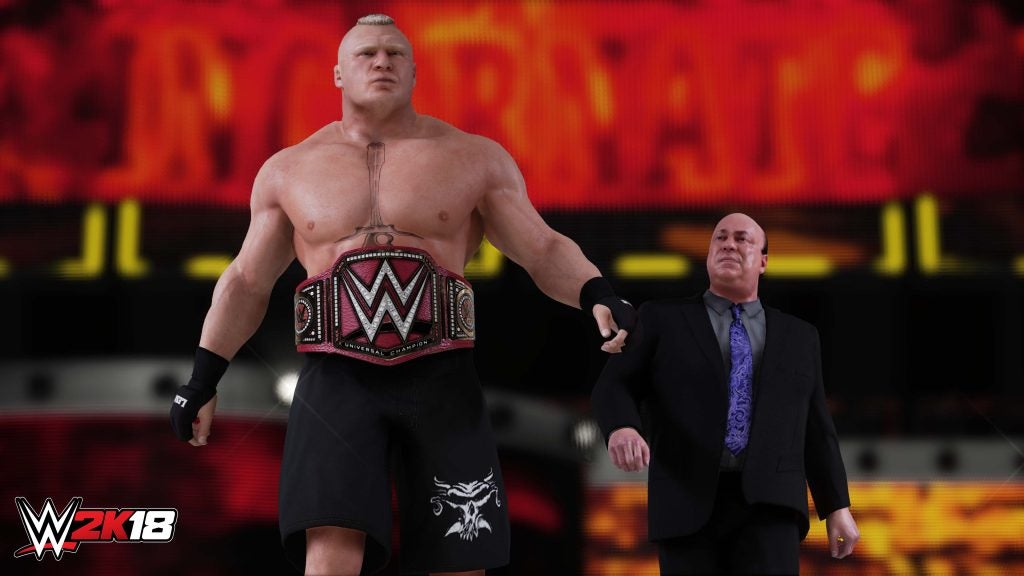 None of this is too surprising where WWE is concerned, though, with the real question mark, once again, coming back to how it plays. 2K has done another fine job in creating a game that handles what pro-wrestling would be if the matches were legit sporting contests, but that in itself is both a positive and a negative.

There’s little argument that gameplay-wise what’s here is among the developer’s best work. Matches are fun, the back and forths you get into it allow a match to build, and reversals are far more balanced than before. On top of that there’s more options this time around – even when it comes to how you want to submit someone you have a choice. 2K has done what it can to streamline proceedings.

It’s also an absolute riot in multiplayer as well with last-minute kick-outs remaining an utter joy. It never failed to make me pop out my seat when someone raises a shoulder at two and a half, and everyone involved deserves credit for that. It’s exactly what pro-wrestling should be. 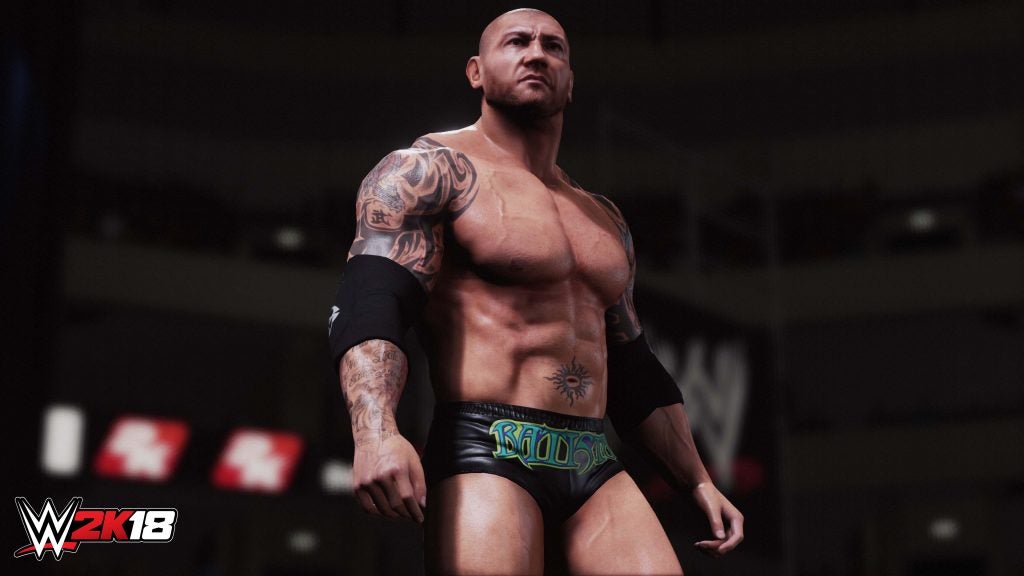 At the same time, the best encounters still occur when you actually work with a friend to plan a match, much like the professionals do. WWE 2K18 caters for this as I was able to do this time and time again, but if the brains behind it properly embraced such a theory I can only imagine how intense this could get. I completely understand hurling the competitive aspect out the window for co-operation when you’re trying to win sounds bonkers, but wrestling is bonkers. Embracing that side a touch more would be a very welcome one.

There is also, as ever, the returning glitches and technical issues, but talking them down seems silly at this point. Collision detection is improved, although still not ideal, and the engine is showing its age, yet fans the world over embrace these foibles as if they’re the highlight of the year. If people are enjoying it, it’s daft to criticise (even if personally I’d be happy for these to fly away forever…).

WWE 2K18 remains a very solid and entertaining wrestling game, though, and one that any fan is going to enjoy effortlessly. It has everything you’d want, a roster bigger than a house and taps into the aspects a large base craves. Can’t say fairer than that.

WWE 2K18 is a great wrestling game with a crazy amount of depth that feels a bit too similar to 2K17 to really hit new highs. If you love the franchise, however, this will rock your world.