The usual Wolfenstein brilliance is here, and MachineGames have shown they've got a great handle on splattering fascists. They should be commended for being bold enough to take big risks here, and several of those risks have paid off, while those that haven't only served to make the game a great deal weirder.

Wolfenstein: Youngblood is an anomaly. A co-op focused shooter with players taking control of series protagonist B.J. Blazkowicz’s twin daughters Soph and Jess, as they tear their way around a Nazi-occupied 1980’s Paris.

It’s bonkers, even by the tongue-in-cheek standard Wolfenstein set in its 2014 reboot, The New Order. Nazi-approved nu-wave kicks out of boom boxes while the Nazis themselves flee from Soph and Jess’ assault. You and a buddy tear through crowds of fascists, giving a thumbs-up at each to increase each other’s respective health and armour.

Wolfenstein: Youngblood, crucially, isn’t the sequel you might have been waiting for. It’s a weird mix of spin-off and experimental sequel, which keeps the pulse-pounding combat, but also flirts with elements from live games and Dishonored-style level designs, courtesy of a collaboration with Arkane Studios.

Some of these elements work, while some fall flat, but Wolfenstein: Youngblood is good enough (and weird enough) that fans of the franchise, or shooters in general, will find plenty to love – and it’s rare that shooters of this ilk let you bring a friend, in this case a wisecracking Jade King, along for the ride. 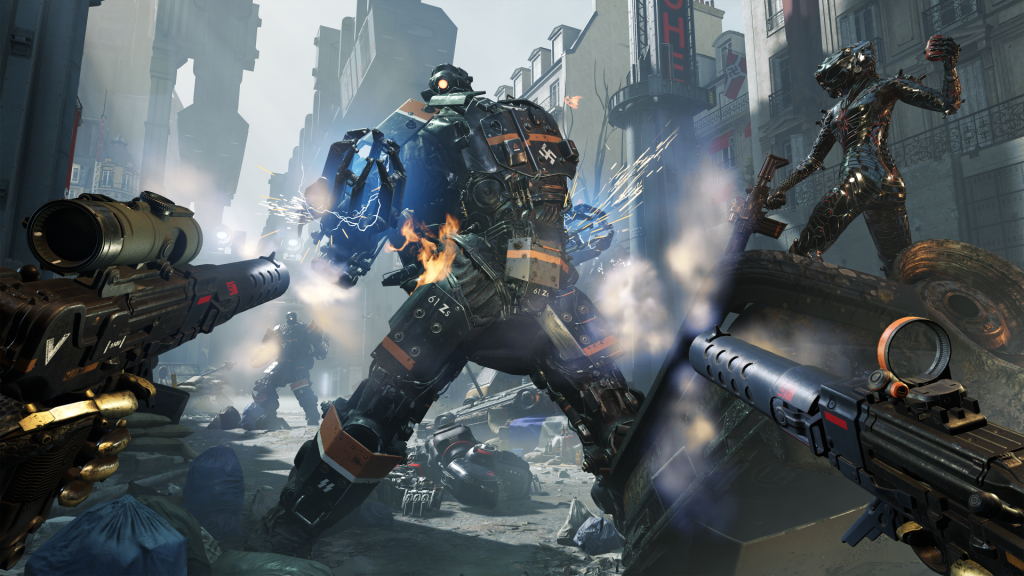 Before I go into some annoyances from the game’s bold changes, I’d like to start with an essential point: shooting in Wolfenstein: Youngblood feels just as good as it always does. Whether you’re prowling corridors with a fist full of throwing knives or bouncing around the place with a shotgun and a death-wish.

Combat is visceral, in so far as the lashings of gore and viscera that splatter the level after every fight. It’s not uncommon to cut off an enemy’s arm and have him clumsily fight on. It’s also a regular occurrence for an enemy to lose his legs to a grenade, or a shotgun blast tearing open a ribcage, exposing the bones to the light.

When you’re fighting level-appropriate — more on this shortly — enemies, weapons feel like they hit hard and combat is brutal, with an almost balletic approach to nazi-killing. There’s a kineticism to the game’s combat that makes it a joy to play. That hasn’t changed. But there are some pretty meaty differences. 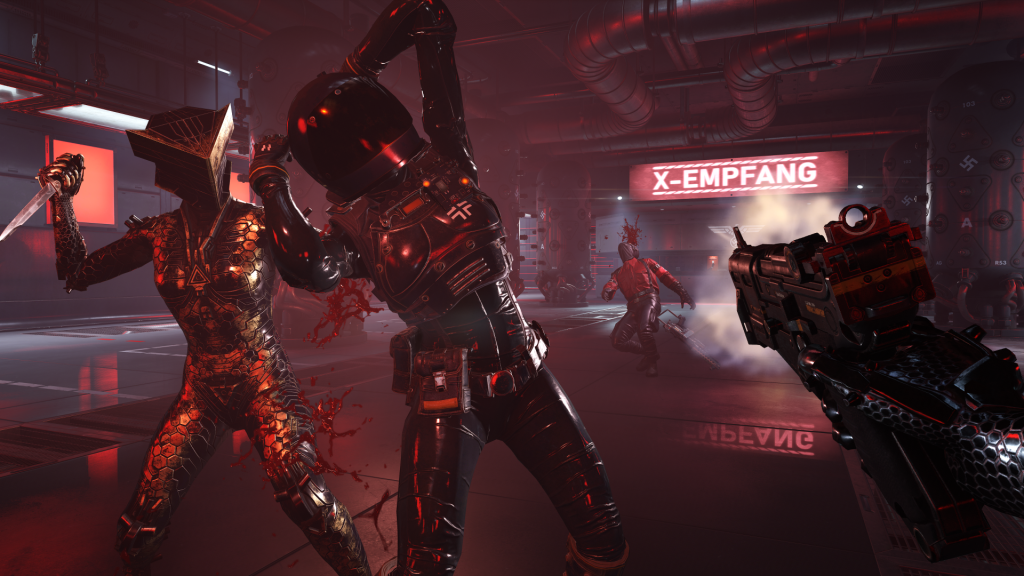 One of the biggest changes is the shift to an RPG-lite system. Both player and Nazi alike have been assigned a numerical level that will impact how likely they are to demolish you, and vice versa. There are lifebars now, and enemies far above you will have a skull hovering next to theirs, meaning your best attacks will barely scratch them.

Nothing makes you feel less like an unstoppable nazi killer than having to bravely turn your tail and flee when faced by a walking tank you can’t even scratch. However, the level system also brings a more regimented system for upgrades that lets you define your playstyle more rigidly. Sadly, this RPG system means lots of core skills for the Wolfenstein experience are now locked behind a skill purchase – dual wielding is now only possible with pistols, or at least it was with the skill choices I made, and I had to buy a skill even for that.

Likewise, picking up the dropped mega weapons of fallen enemies requires a skill, and while you’re constantly earning experience points and levelling up, it’s a little bit of a shame to have your life goal of being the ultimate throwing knife assassin gated by your level.

In-game currency appears for you to upgrade your weapons (and cosmetics, which are fine) but the modular upgrade system is mostly about picking between three different types of upgrade to get a set bonus on individual weapons. While some of the powerful Kraftwerk devices have cool upgrades, there are scant few interesting choices for the rest of your arsenal. Strapping a red dot and a silencer to an assault rifle, for example, is positively archaic – and a step back on the cool upgrades afforded the player in earlier games in the franchise. 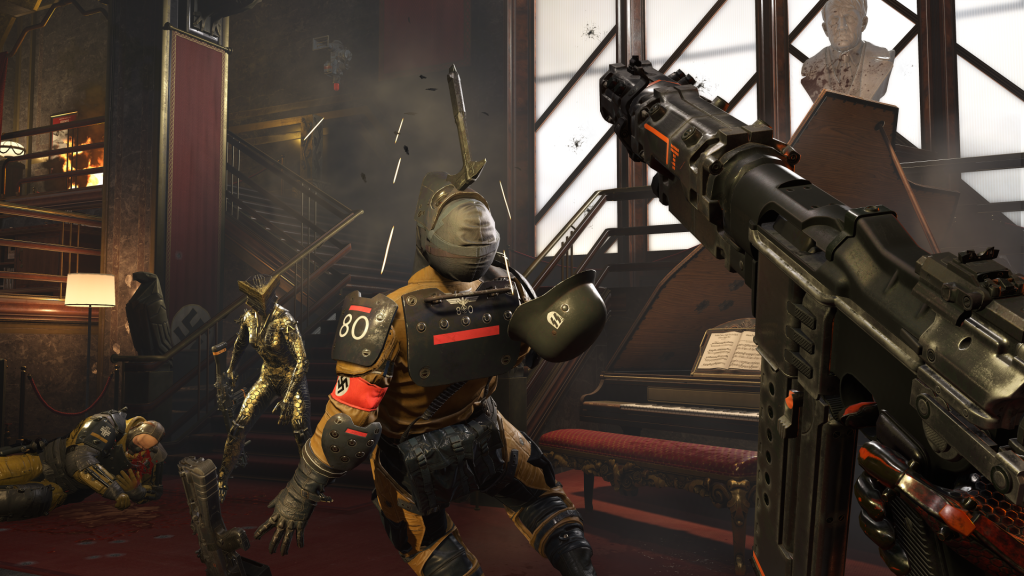 Similarly to skills, Wolfenstein: Youngblood allows players to define their role a little more rigidly, but this means you can’t have it all – step backwards that will see co-op characters feel a little more distinct, but means you have to share the fun a little.

When the game is working, it’s a worthy trade-off. I found myself opting for a stealthy build with brutal throwing knives, shimmering in and out of invisibility to cut and gut my way through the Nazi menace. With the fact throwing knives can be picked up and reused from the corpses of the dead, I’d become the world’s first infinitely sustainable source of fascist slaughter. When it went wrong and things got loud, I switched up for dual-fisting machine pistols, closing the distance with a hail of bullets so I could keep stabbing.

Meanwhile, Jade dashed around the place plated with armour, spraying submachine gun rounds into the advancing hordes and picking me up when I overextended and got myself killed. We had clear roles, and it was a bunch of fun. It’s just that sometimes I wish it was possible for me to be the unstoppable juggernaut and the stealth assassin, something that was possible in previous games.

The weapon upgrade system is a microcosm for the game’s problems. It’s a step back from the two games that came before it, seemingly for the purpose of fitting in the co-operative gameplay. It’s also the reason every single door seems to require you to commit a “co-op” action, the one where you have to open up an elevator or a crate by both walking up to the event and pressing a button. After lengthy sessions, this became incredibly tiresome, as the amount of cooperative actions were very over-the-top. 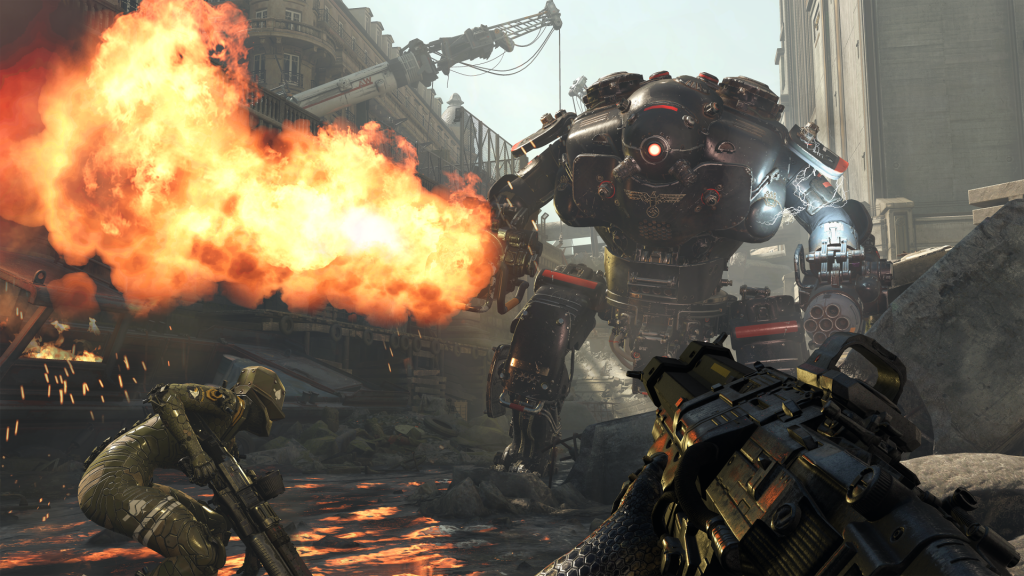 In exchange though, we got to admire the incredible environmental design, and levels that feel much more open-ended and interesting to explore than anything else in the genre. It’s genuinely remarkable how much life has been brought into the world, from a note awkwardly explaining that useless colleague had set his personal code as 1-2-3-4 to the German nu-wave tracks that are just about recognisable as the real deal, with a slight twist.

Then of course there’s the sisters themselves, interesting and distinct characters (and radio-voice Abby is a great foil for the team too, getting involved in a cracking cutscene at the end of the first act) that I… well, I hated. But I hated them because they were dumb teenagers, and very few games have ever made me feel that.

I knew I hated them from the first time they killed a Nazi, when the girls — up until this point without a single kill to their name — teamed up to stab a nazi to death, cheering and vomiting in equal measure that they had managed to snag a kill together. This is reinforced every time you use elevators, where they goof off around without a care in the world while heading to their destination.

As a world – when it comes to writing, characterisation, all of that – Wolfenstein: Youngblood is stellar. If this is what we can expect when Arkane Studios is pulled from the immersive sims they do so well and turned loose to work in collaboration on another genre, we’re in for a treat. I’ll be thinking about a ton of little details from this world long after I’m done playing it. 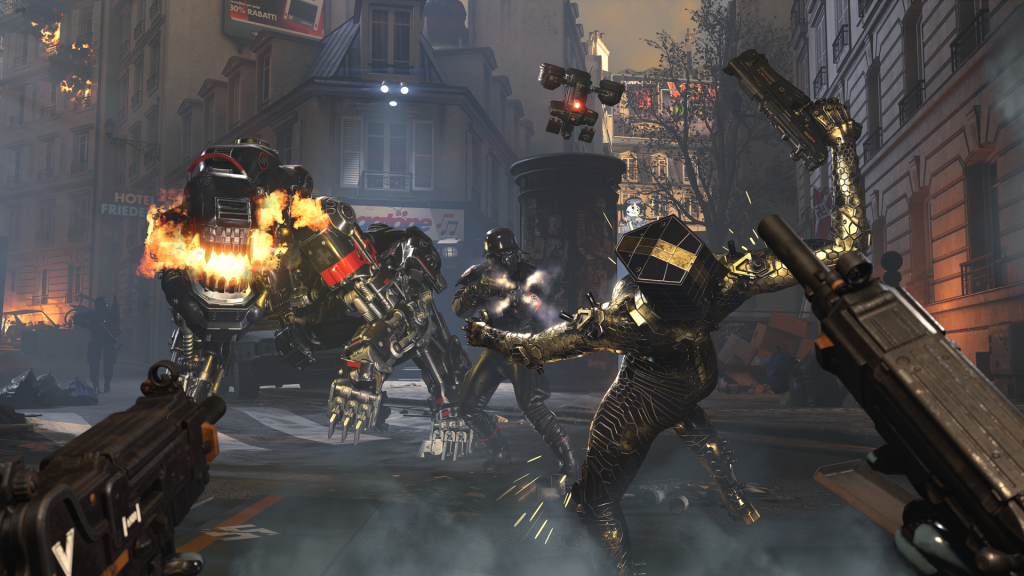 Unfortunately, the switch to an RPG system has hindered the game. The bloody combat feels much the same, albeit with more limitations and slightly less fun. However, for all of the experiments that haven’t panned out, there are plenty that have. We’re looking at an exciting entry into the Wolfenstein series, which isn’t better or worse necessarily than those that have come before – just different.

The usual Wolfenstein brilliance is here, and MachineGames have shown they’ve got a great handle on splattering fascists. They should be commended for being bold enough to take big risks here, and several of those risks have paid off, while those that haven’t only served to make the game a great deal weirder.

Games as a medium would be better if risks like this were taken with more beloved games. It’s unlikely, with how expensive the whole AAA development scene is, but this is a glittering example of what can happen, despite its flaws.