What is the Wahoo Fitness Balance Bluetooth Smart Scale?

Weighing yourself used to be simple. Stand on the scales, peer down at the display, feel mildly bad about yourself, and repeat the following week. Now, bathroom scales – like nearly every other home appliance in existence – are getting smart. The Wahoo Fitness Balance Bluetooth Smartphone Scale is among such devices.

Stand on this scale and not only will it tell you how much you weigh, but it also tells your phone. That data is then fed into Wahoo’s accompanying Wellness app and added to a graph of your ongoing weight loss (or gain). BMI is also measured and displayed. This is technologically leaps ahead of what traditional bathroom scales are capable of, but the real strength of the Wahoo Fitness Balance Smartphone Scale is its ease of use.

The bathroom scales I remember from my childhood used to sit tucked in the corner looking sad, a bit battered, maybe a little rusty and definitely not attractive in any way. They were necessary evils rather than luxury items. Times have changed, however, and the sleek, slimline design of the Wahoo Balance makes it a classy addition to any modern bathroom.

A minimalist 13-inch square of transparent glass sits on top of a light aqua-green base with no visible buttons. There’s just one switch on the underside for changing between metric and imperial readouts. 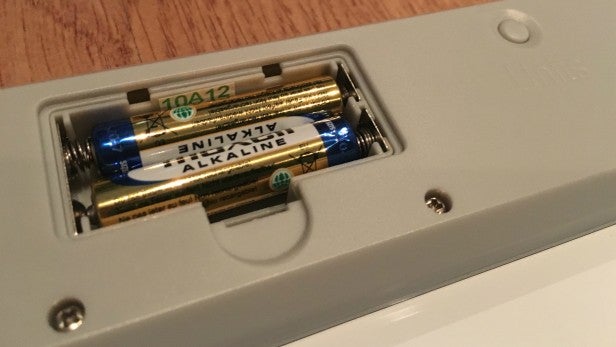 Setup is straightforward. All you need to do is insert a pair of AAA batteries and these will last for around 12 months. In lieu of instructions, the box contains a QR code that, once scanned, takes you to Wahoo’s website. Or at least that’s what it’s supposed to do. Instead, it took me to a non-existent webpage that informed me I had ‘taken a wrong turn on the dancefloor’. Not the best start.

Once I found the correct webpage myself, however, setup was insanely easy. Simply download the Wahoo Wellness app and it automatically finds the scale, then you’re ready to get weighing.

The app lets you create up to 16 different profiles and for each one it asks the user’s height (so it can determine BMI) and target weight. Stand on the scale and the data is sent automatically to your phone. There’s no need to manually sync and you don’t even have to tell it which user you are. It’s so effortless that there’s really no excuse not to use the scale on a daily basis because, let’s face it, any barrier, no matter how small, can be enough to stop something becoming part of a daily routine.

The only slight downside to this automation is that it determines users based on weight, so if you share the scale with someone who clocks in at a similar weight, it won’t know who’s who. You can manually select the user in the app, however, so this is just a mild inconvenience. 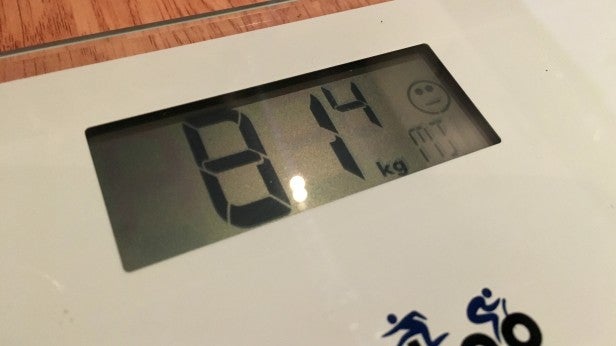 You don’t even need to stress about having your phone on you each time you use the scale. Internal memory stores your data – it can remember up to 130 weigh-ins – and the next time you open the app in range, all your stats are automatically pinged across.

Bizarrely, while I’ve been testing it, the Balance has sent over a couple of weigh-ins that clearly aren’t mine – no, Balance, I definitely don’t weigh 120kg – but because they’re way off my weight the app recognises these as erroneous and asks: ‘Are any of these yours?’

That troublesome data probably came from knocking the scale accidentally rather than a poltergeist shot putter, so it’s not a massive problem. But, even more bizarrely, every time I tried to delete the entries from the app it crashed. These weigh-ins aren’t added to any particular user profile, but it’s a puzzling flaw for an app solely designed for iOS. 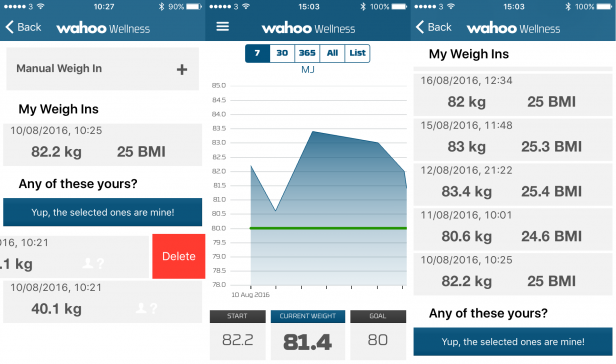 The app itself is super-simple, with a graph showing your weigh-ins and a green line representing your target weight. You can lengthen or shorten the horizontal axis by choosing to show weekly, monthly or annual fluctuations, which is a useful tool for trying to observe any patterns that might emerge. Those patterns, in turn, could be used to inform any dietary or behavioural changes that could lead to effective weight loss or gain.

You can also view a list of all your weigh-ins, along with the BMI for each, and share data with other apps such as iBody and Monitor Your Weight and, of course, Apple Health, but that’s the extent of the app’s capabilities. 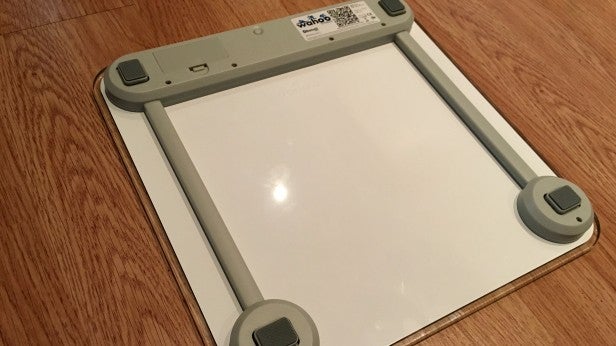 Should I buy the Wahoo Fitness Balance?

The Wahoo Balance is a breeze to use, with zero effort required to transfer weigh-in data, making it a reasonable purchase if you’re simply looking to monitor and record your weight. The Balance and the basic app that accompanies it have the potential to be extremely useful tools on your quest to shed the pounds. If you’re an iOS device owner, that is. It’s perplexing that there’s no Android compatibility in this day and age.

Also, the phantom weigh-ins were irksome and BMI readings are of little use to anyone who exercises regularly. Muscle’s denseness means that healthy people can end up getting an ‘overweight’ score, so BMI calculations are quickly falling out of favour. If you’re carrying a lot of muscle mass, give the Balance a miss and go for a scale that measures body fat percentage.

If you want more functionality than the convenience of your weigh-ins being logged automatically, rival scales such as the Withings Body Cardio and Fitbit Aria offer far more features.

Related: Best smartwatches you can buy

A Bluetooth-connected scale with none of the faffing about that sometimes comes with smart devices. It does a good job of recording and tracking weight, but it lacks some of the more advanced features of rivals.