What is the Vodafone Smart V8?

Vodafone’s Smart V8 is the company’s new mid-range offering, priced at £160 or available on contract for £23 a month. It sits under the Smart Prime 7, which remains the company’s own-brand flagship – but in many ways, the new Smart V8 is even more attractive thanks to its low price.

At and around the same price sit the Huawei P8 Lite, Motorola Moto G5 and Sony Xperia L1 among others. But with a great camera, passable performance, good screen and all-day battery life, the Smart V8 holds its own against the big-brand competition.

The Smart V8 is identical to the ZTE V870, which you’re unlikely to find in the UK. The only difference is the rear of the phone, which is a dark grey instead of light grey. It’s an attractive device with premium-feeling chamfered edges. Despite its 5.5-inch screen size it isn’t overly chunky, weighing in at 166g and 7.9mm thick. For comparison, that’s lighter than an iPhone 7 Plus, and only a little thicker.

It feels solid and well-put-together, and even following half a dozen accidental drops onto wooden floors on both its corners and flat onto the screen, it survived mostly unscathed. I say ‘mostly’ because the shiny chamfered edges seem very prone to picking up scratches. I can’t pinpoint when they occurred, but there were marks on every edge of the device. I did have to look for them closely, but I can foresee that a year down the line, it will likely be looking a little worse for wear. 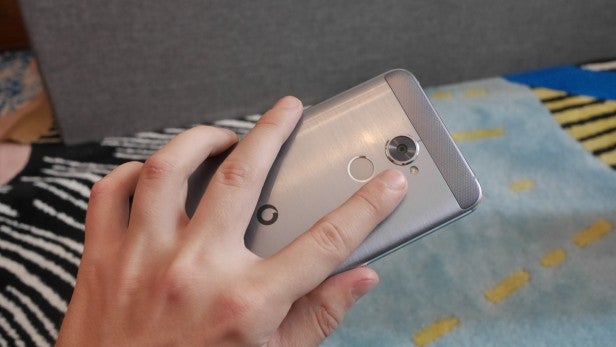 Around the back of the V8, there are two lozenges of slightly grippy, textured material that presumably make space for wireless components, but also helpfully stop the phone from slipping off tilted surfaces. It’s also here that you’ll find the camera bump, which protrudes a couple of millimeters from the back of the chassis. Despite its precarious positioning, it didn’t pick up a scratch during my week of testing. Below this you’ll find the fingerprint scanner.

The headphone jack is on the top, and the nano-SIM/microSD card tray can be found on the left along with a rather oversensitive standby button; on the right is the volume rocker. The bottom edge is filled by a pair of speaker grilles and a rather old-world micro-USB port. I hope 2017 becomes the final year that mid-range phones ship with micro-USB, as USB-C is faster, reversible and generally much better to use. But given you’re probably upgrading from a phone that still has micro-USB, it’s no big deal.

There’s also NFC, which works with the excellent Android Pay. 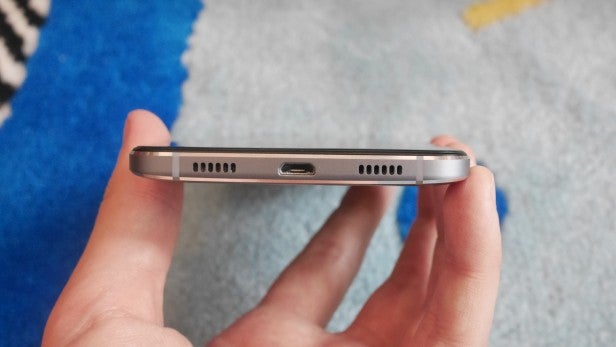 The Smart V8 comes equipped with a Full HD IPS display, and it’s very good for the money. It’s just about bright enough to be used in the strongest sunlight, although just a tad more brightness would have been welcome. Blacks are deep enough to keep movies and games atmospheric, and colours look natural enough.

My review unit had an out-of-box fault with the right edge of the screen, where a few pixels couldn’t display black properly and instead displayed a random colour. Check this when you first start using the Smart V8 in case it’s a widespread fault, and make sure you return the device if it’s an issue.

Screen performance is mostly fine, although there’s a little motion blur when scrolling through text. It’s nothing overly distracting, but it does set this phone apart from more premium options.

I also wasn’t a fan of the auto brightness adjustment. It does a good enough job, but it does it exceptionally slowly. It could take upwards of 5 seconds for the sensor to pick up a change in lighting conditions, during which time the screen is either blindingly bright in dark conditions or unreadably dark in sunlight.

Also on the front sits a useful LED notification light, although it can sometimes be a bit over-active when notifying you of an open Wi-Fi network, flashing red until dismissed. Still, it’s nice to have, particularly when this device doesn’t have an always-on display.