A new breed of phone is emerging. They look and feel just like their normal mobile brethren, but with one key difference – these phones have a dedicated social networking button. The HTC ChaCha, HTC Salsa, iNQ Cloud Touch and Vodafone 555 are all phones geared towards Facebook users, but the 555 is the cheapest of the lot.

This phone is available for just over £60 on a pre-pay deal, and its main hardware focus is typing. It offers a full physical Qwerty keyboard on its front, which invites comparisons to both a BlackBerry and HTC’s recently-released ChaCha Facebook phone. 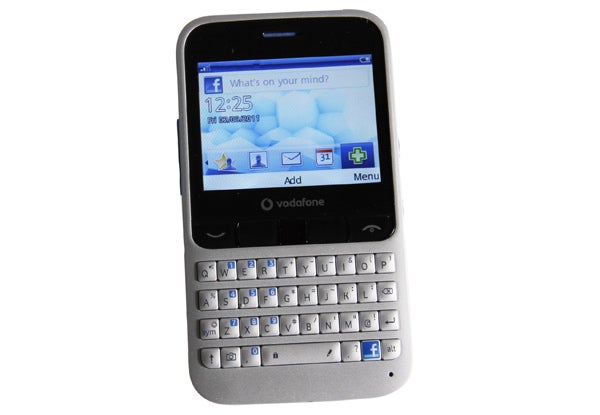 The latter is particularly pertinent, as the pair even have the same finish – a mix of metallic silver and white. In this case though, the phone is made entirely of plastic. In the Vodafone 555’s defence though, it would be unrealistic to expect any metal body bits at this price.

There’s a single design aberration to this otherwise ok-looking device. The volume rocker on the left edge is a vivid blue colour. It’s not even the traditional Facebook hue, so why it’s there in a sea of white and silver is a mystery to us. It looks out of place. It looks wrong, and it should be de-friended immediately.

It’s a shame because the Facebook button, a natural target for outrage, looks perfectly tasteful nestled within the Qwerty keyboard. It’s decked out with the Facebook logo, but isn’t given undue dominance, being the same size as the surrounding character keys.

Up top is a 3.5mm headphone jack, while on the right edge of the phone is the microUSB socket, used to transfer data and charge the device. There is a microSD slot too, but this is hidden under the battery cover and so doesn’t disturb the 555’s curves.

Aside from the blue volume rocker, the Vodafone 555 has a consistent look. The keyboard’s too boxy to look attractive, but we’ve seen worse-looking budget phones. Think of it as an HTC ChaCha formulated by communist state designers and you’re on the money. And at 12mm thick, it only has a little puppy fat – considering the built-in Qwerty keyboard. 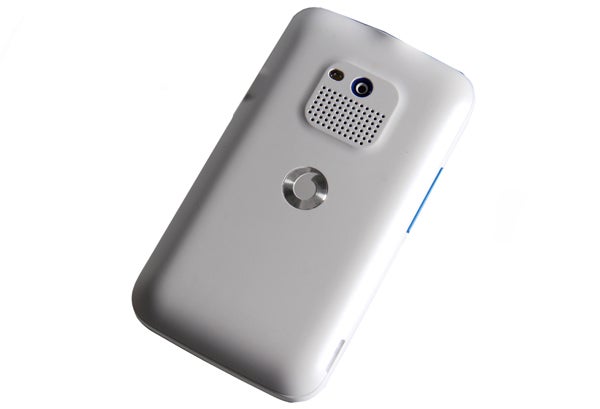 The specs inside the thing are very basic though. It uses a feature phone UI – ruling out a proper app store and advanced web browser – has no 3G or Wi-Fi connectivity and relies on physical controls rather than a touchscreen. Aside from the keyboard, there’s a small optical trackpad used to navigate the interface and a couple of soft keys that function as select and back buttons.

The Vodafone 555’s interface is not a smartphone system, but it does take a few influences from RIM’s BlackBerry OS. Your home screen offers a clock and a series of small icon-based shortcuts you can scroll through using the optical trackpad, plus a bar up top to update your Facebook status. The whole interface is decked out in a cool blue theme inspired by Facebook’s colours, and it’s rather attractive. Understated, minimal and clear. 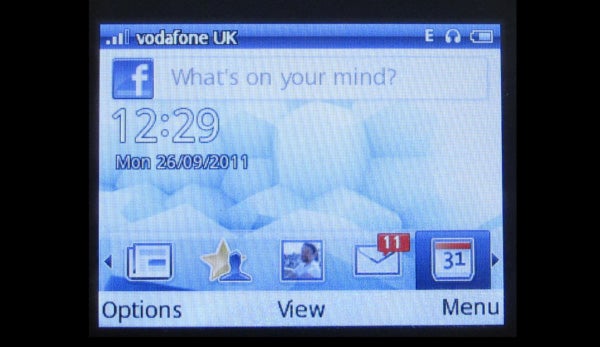 The “app” icons have a pleasant, lightly cartoony style to them and there’s never too much information crammed into a screen – a good job, because the display is a low-resolution 240×320 pixel model, making small text appear blocky. To earn its Facebook stripes, the Vodafone 555 strips the social network’s goodies into a variety of apps. 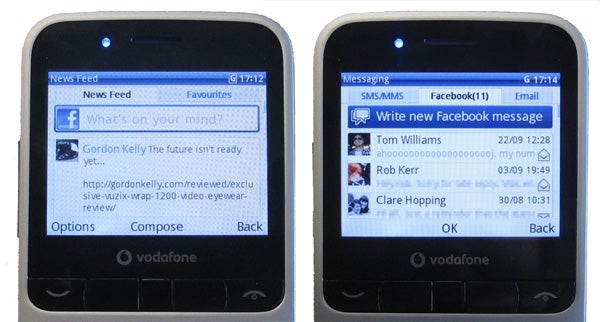 There’s a dedicated chat app, the picture gallery has a Facebook tab, there’s a separate news feed for your Facebook wall and a connected search function that sifts through groups, pages and contacts. For a £60 phone, this is a commendable effort that makes sure the phone is worthy of its Facebook button, but other limitations serve to sully this a bit.

This dedicated social networking button takes you directly to the screen where you update your status, but unlike other Facebook phones like the HTC Salsa, it’s not particularly context-sensitive and can’t be used to quickly share links with your Faccy B friends while browsing. Anything interesting you find will probably be old hat by the time you stumble upon it though, because internet browsing with the Vodafone 555 is very slow. It doesn’t have 3G for starters, relying instead on the much-slower GPRS and EDGE, and scrolling around webpages with the tiny optical trackpad is laborious, requiring RSI-inducing numbers of gestures to scroll the length of a page. 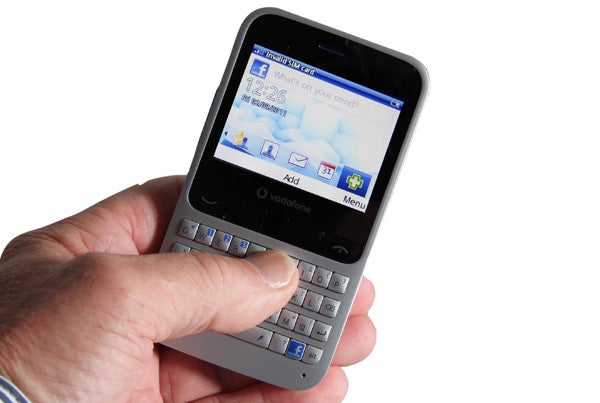 Its built-in browser is Opera Mini, the java version. Java apps are very constrained compared to their smartphone counterparts, incapable of the same sort of multi-tasking and visual feats, but if we had to pick a java-based browser to use, this would be it. It reaps links posted by your Facebook friends and lets you access them from the app’s boot screen, which can also be customised with handy tile-based favourites shortcuts.

Further app support is disappointing. There’s a Palringo chat app, a weather forecast and basics like a calculator and calendar, but there’s little scope beyond that. A couple of years ago, this wouldn’t have been too much of a problem for a budget phone like the Vodafone 555. But now that Android, Symbian S40 and S60 are available for well under £100 it’s more of an issue. The Vodafone Live! online portal offers a handful of java games, but worthwhile additional apps are harder to find. To access Twitter, for example, you’re best off heading to the browser – however, fairly comprehensive email account support is built into the Messaging interface, which brings together these emails alongside text messages and SNS updates. 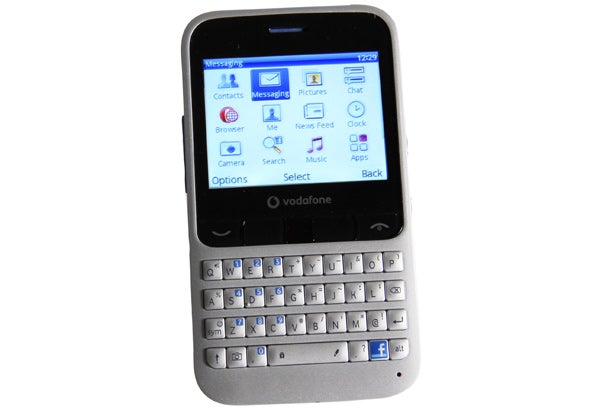 The optical trackpad and the layout of the OS do a good job of making the 555 feel BlackBerry-like, but the keyboard is a way off the best. The keys are tightly scrunched together, and don’t have clever-enough contouring to give your fingers that touch type-style confidence when tapping away at speed. Compared to the HTC ChaCha and BlackBerry Curve, with their more spaced-out keys, or the BlackBerry Bold with its genial contouring, the Vodafone 555 feels slightly below-par – with a rather stiff action. 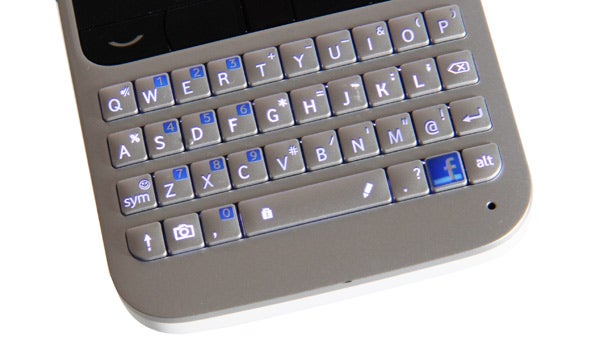 The keyboard is handy, but not up there with the best

That said, with a bit of practice it’ll allow you to type away far more quickly than with a T9 keypad or small virtual keyboard. It also has blue backlighting to stop typing in the dark from becoming an entirely faith-driven experience.

The Vodafone 555 features a 2-megapixel camera on its back. Even by budget standards, this is a low-powered sensor. However, one of the big surprises of this phone is that it has an LED flash. Many phones with higher megapixel cameras fail to include a flash. This phone’s single-LED flash may be fairly weak and have a short throw, but it’s better than nothing – making night-time shots of people possible.

Other than this though, the camera is poor. It uses a fixed focus, ruling-out being able to have any control over the subject of your snaps. Other control options are also very limited. There’s a night mode and some exposure compensation, but that’s it – no fun effects, no digital zoom. This being a Facebook phone, it will let you upload your snaps directly to the social network – although over its slow sub-3G connections this will be a slow and laborious process.

Realising this, perhaps, the Vodafone 555 doesn’t let you do the same for video. It’s captured in 3GP, and is of pretty low quality. 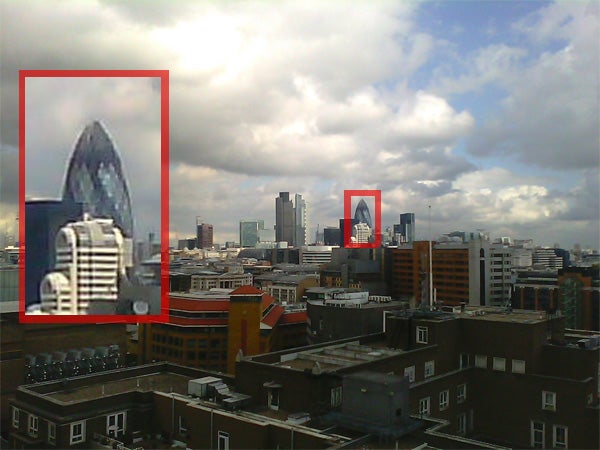 The 2-megapixel camera in action

Not having super-fast connectivity does come with one pleasant side-effect though. Its 1000mAh battery doesn’t need to be charged every day – as it almost certainly would if the Vodafone 555 used Android and had 3G built-in.

However, the importance of that hole where 3G should be, should not be understated. This is a Facebook phone. Facebook happens on the internet. The Vodafone 555 isn’t very good at the internet. When downloading simple text updates, it will only take a few seconds, but try to browse through pictures and the pace drops down from languorous to something approaching torture. 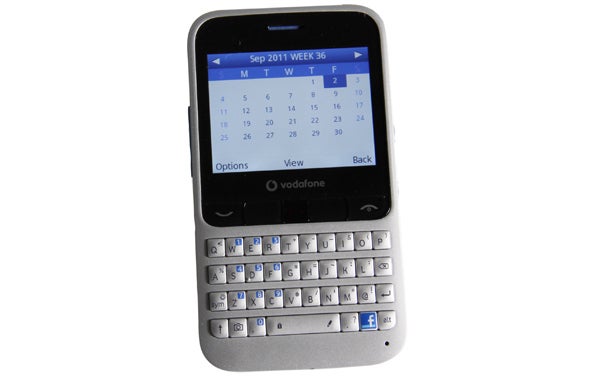 Here lies the problem – while the segmentation of Facebook into separate apps is nice, given the slow connectivity, something like the Samsung Galaxy Europa or Vodafone Smart arguably offers a better overall Facebook experience. Those phones don’t cost all that much more than the Vodafone 555.

It’s not a device without merit – you won’t find a smartphone with a physical Qwerty keyboard for just over £60, and we appreciate the interface’s calm, cool blue look. We can’t help but imagine the disappointment on the faces of buyers as they realise quite how much slower the Vodafone 555 is at navigating Facebook’s wares than their friends’ iPhones. If you’re in love with the form factor, you’d be better off searching for a bargain deal on the Nokia C3, which offers Wi-Fi to make browsing through pics at home much, much quicker.

Verdict
The premise of the Vodafone 555 is sound. It’s a cheap phone for Facebook fans not keen on splashing out for a fancy smartphone on an expensive contract. The interface, although basic, does a pretty good job of splitting-up Facebook content intuitively, too. However, as there’s no fast connectivity, any online exploration – whether on websites or within a Facebook gallery – feels horribly slow. Too many phones around the same price offer this quick connectivity. It may be part of a cutting-edge new wave of “social networking phones”, but in use it feels distinctly behind-the-times.