Android is the Robin Hood of the smartphone kingdom. It nicks all the stuff that was once the preserve of the well-heeled and brings it to the pay as you go crowd. The Vodafone Smart is one of the cheapest Android phones yet, available for just £60 on a pre-pay deal. However, even with the ultimate leveller OS at the helm, some sacrifices have had to be made to chip away those pounds.

The Vodafone Smart is a dinky phone by touchscreen standards. With just a 2.8in screen on-board, only the teensy Sony Ericsson Xperia X10 Mini is significantly smaller. It’ll disappear into pockets with no trouble, but at 12.6mm thick isn’t super-slim compared with waist size-obsessed mobiles.

Part of this phone’s USP, other than costing less than a family trip to the cinema (with popcorn), is that you can buy custom engraved backplates featuring your own images. It’s a neat idea that supports the notion that phones like this bring you luxury-style features without demanding a 2-year contract or a £250 price tag. Sadly, our review model is the plain edition.

Contrary to how the phone may appear in the manufacturer’s own shots, it’s not plain white though. The front fascia and battery cover have a slightly metallic, almost pearlescent, finish. This effect is spoiled though by a glossy plain white strip that runs between these two elements, making the finish inconsistent. It’s an unfortunate signpost of the phone’s budget nature.

Build quality is perfectly good though. It won’t wow, its body made entirely of plastic, but it feels tough for a budget model. The back cover is thinner than the budget HTC Wildfire S, but the tight fit into the main part of the body stops any excessive flex.

Underneath the battery cover is a microSD slot, which will boost the tiny 100MB or so of internal storage by up to 32GB. No card is included in the box, but this is not a serious issue for such an aggressively-priced phone when 4GB cards cost less than £5. The included memory will suffice for installing a handful of apps anyway.

Like almost all budget smartphones, the selection of sockets and buttons on its sides features the basics only. There’s a volume rocker on the right edge, the power and headphone jack up top and the microUSB charge/transfer socket on its bottom. The prosaic design of the Vodafone Smart makes the potential to customise it with a printed cover all the more important. Fire up Microsoft Paint and get scrawling already!

The Vodafone Smart runs Android 2.2 FroYo. It’s not the very latest edition of the operating system, as Android 2.3 Gingerbread has been out for some time, but it contains the most crucial update of the 2.x versions – the dramatic speed boost. 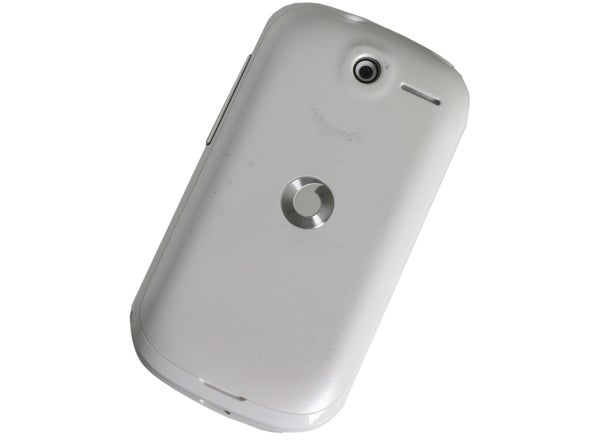 This phone has a flat-out old 528MHz processor from Qualcomm. We dread to think how this phone would perform with Android 2.1 on-board, but with the FroYo speed injection it’s perfectly serviceable. There’s some lag in day-to-day navigation, which we didn’t see in 600MHz phones like the HTC Gratia, but it manifests as an occasional jaggy scroll of the apps menu rather than any significant waiting times. The Smart won’t be able to take on the latest 3D games, such as Dungeon Defenders: First Wave, but it can cope with casual titles and older 3D games. The processing power won’t impede the majority of apps either.

It’s a limitation that’s not too tricky to get used to, but the screen will pose more of a problem for some. At just 2.8in across, it’s small enough to make typing using the virtual keypad tricky more than a little inaccurate when in portrait mode. This will depend in part on the dexterity and size of your digits though, as the touchscreen is a respectable capacitive model – happy to do business with your finger rather than a stylus. The last budget Vodafone Android phone, the Vodafone 845, used a resistive touchscreen, which is difficult to use with a finger at this size. 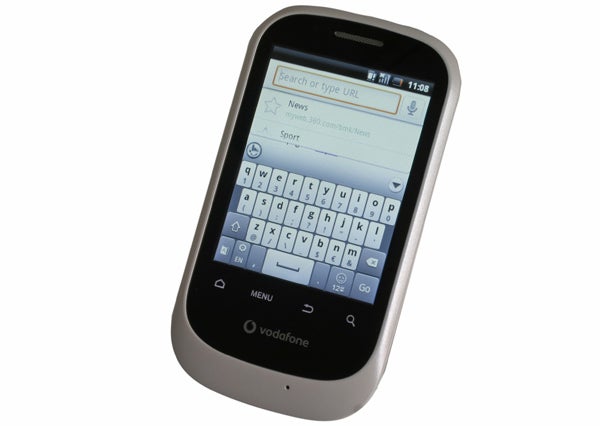 The Smart 858 also drops the custom UI of the Vodafone 845. This phone comes with a near-vanilla install of Android 2.2 FroYo. A few Vodafone apps come pre-installed, including the Vodafone music and apps Shops, and the Vodafone Updates portal. It’s bloatware, sure, but inoffensive as far as bloat goes.

The downside of having only a few custom features added is that you only have the standard widgets to drop onto your homescreens from the off. A trip to the Android Market will solve that though – it may not have all that many stellar apps, but there are enough widgets to satisfy most.

Like most budget Androids with lesser processors, the Vodafone Smart doesn’t support full Adobe Flash. It’s a basic feature of Android 2.2 but is chopped out of these lower-end phones because their CPUs simply wouldn’t be able to churn out Flash content at a decent speed. Another surfing favourite, multi-touch, is also not supported so it’s plus and minus buttons for zooming.

Therefore, if you want the full web experience, you’ll have to spend a little more. It does come equipped with HSPA mobile internet and Wi-Fi though, so browsing needn’t be slow.

The Vodafone Smart’s 2.8in screen isn’t just limited in size, it’s also fairly light on pixels. It has a 240×320 pixel display, resulting in a low dpi rating (dots per inch). This makes everything on-screen look more blocky than usual, but games and web browsing are particularly affected – as the source images tend not to be tailored for this resolution.

Typical of a budget panel, viewing angles aren’t perfect. Tilt the screen left or right and you can still see what’s on-screen, but move it up and down and the image degrades. In normal usage though, this won’t be a big problem. It does put final nail in the coffin of the Smart’s video-playing potential though – along with the small screen and lack of video support (it’ll only the Android basics of H.264 and MP4).

The built-in camera is similarly lacking. It uses a 2-megapixel sensor, has no flash and no autofocus. It’s the kind of camera often bolted onto these budget phones, as an obligation rather than a feature with much oomph behind it. Photos are predictably poor – enough to snap a wallpaper for your phone, but not nearly good enough to print out.

It will capture video too, in H.263 at 352×288 pixels. As with photos, quality is poor, with very limited detail and jittery movement when panning. 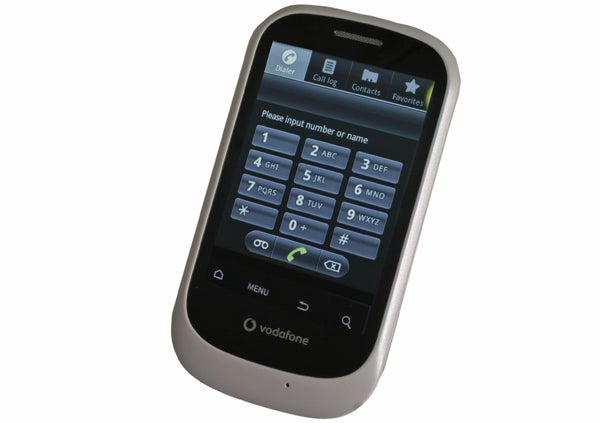 The Vodafone Smart won’t play many other types of video either, just the Android basics of H.263, H.264 and MP4 – no Divx or MKV here. It’s not a feature black hole to mourn too much though, as the 240×320 pixel 2.8in screen isn’t good enough to make movie-watching pleasurable.

These lacking media features are things we could have pegged as soon as seeing the Vodafone Smart’s £60 price tag. They’re the most sensible features to cut too, as relatively few smartphone users watch full-length movies or TV episodes on-the-go – much as hardcore users may protest that they do.

In spite of the small screen, the 1200mAh battery doesn’t excel beyond the standard Android battery life. Keep Wi-Fi and 3G enabled and you’ll need to charge the Vodafone Smart every day to avoid hearing its vibrate death rattle come day two.

If you’re willing to spend just a little more, you can usually snap-up a previous-generation Android with better specs and a better screen, such as the Samsung Galaxy Apollo. However, right now you won’t find anything cheaper running Android 2.2.

Vodafone Smart is ridiculously cheap, but as the price slips down towards pocket money territory, more features have to be cut down. The capacitive touchscreen is a major upgrade over older budget Androids but the low-res, small display makes us think it’s worth spending a little bit more for a more pixel-packed model.

If you’re cash-strapped and in love with Android though, this will pick up emails, connect to Facebook and tweet away with the best of them.